Getting a new phone every two years is nothing new, but what about a new telly? The high price and impressive reliability of most TVs makes this seem like an absurd, impractical notion. But with Samsung’s new upgrade plan you could have a shiny new QLED on your media unit every 24 months.

The main question is, do you need one?

There are other questions too. Important ones like what happens to your old TV, can you still upgrade if your old TV’s broken, and will you end up spending more money than if you bought your TV from a retailer?

We reached out to Samsung and did our own research to see if smartphone-style TV upgrades are a useful option or a waste of time.

Top five TVs for 2019: take the hassle out of choosing and skip straight to these extraordinary sets.

First off, you don’t need to upgrade if you don’t want to. You can treat the upgrade plan as a way of spreading the cost, interest-free, over 48 months.

If some newly released feature does make you eager to upgrade your QLED, your existing TV needs to meet a few criteria:

The current TV is collected by Digiland, which will assess it to ensure it meets the above criteria. If it doesn’t, or you don’t pass the credit check for the new 48-month plan, then you won’t be upgrading.

What happens to your old TV and is it sustainable?

Waste from electrical goods is an enormous problem. Many of the devices we dispose of end up in gargantuan, and often illegal, sites in countries such as Ghana and Vietnam, where they are broken down to harvest the precious metals within. This is recycling, but it’s not an ideal solution. One of the quickest and most common ways of separating the materials from the devices is to burn them, which releases harmful chemicals and carcinogens into the air.

Samsung told us it refurbishes and resells as many TVs as it can, which fits with the upgrade plan criteria that the TV must power on and have a working screen.

If a TV is classed as being beyond economical repair, it will be broken down for parts and used for future repairs. Digiland, the company which collects and assesses the TVs, is T11-registered, which means it is allowed to repair, refurbish and dismantle electrical waste and electronic equipment.

Samsung also told us that the only parts of the TV that would be sent to an AATF (approved authorised treatment facility) would be damaged plastics. An AATF is responsible for treating waste materials and preparing them for disposal. This could mean the plastics are recycled, but not necessarily.

Given how any collected TVs need to be in pretty much full working order, the waste generated from this upgrade plan could be minimal. It could also be argued that a company like Digiland, or Samsung’s AATF partner, are better equipped to deal with the disposal of a faulty TV than your average person at home.

But there’s also the possibility that perfectly serviceable TVs, ones that have damage to the chassis that doesn’t prevent it working, could receive entirely new plastic bodies. Until the start of 2019 AATF companies had a target to recover 75% of the components that come through its facilities and a 55% recycling target, which means not everything Digiland sends its way had to be recycled. In 2019, the targets are even higher. It’s difficult to say exactly how much waste this process would generate, but it’s almost certainly more than what would be created if the owner kept using it as normal at home.

Do you need a new TV every two years?

Most of us keep our TVs for closer to a decade than two years. Major retailers, such as Currys PC World and John Lewis, offer five-year warranties, and you get a six year warranty if you buy from Richer Sounds. Clearly these devices are made to last and be relevant for a long time.

New TVs come out every year, but often the changes and new features are relatively minor. It’s only when we see something dramatic like the jump from 4K to 8K that we get a truly compelling reason to upgrade. But even then, the first 8K TVs that are now on the market have launched at a time when there’s no native 8K content to watch on them, and this isn’t likely to change in the next 24 months.

We still test TVs the same way now as we did two years ago, so we’ve compared the scores and ratings on Samsung’s 2016 TVs with its 2018 models to see if there’s been a dramatic shift in quality. 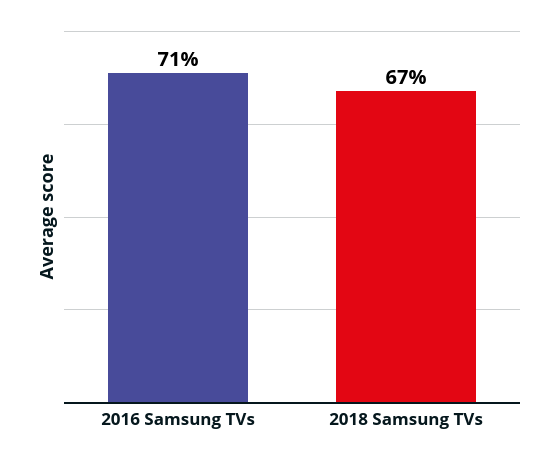 In 2016 we tested 58 Samsung TVs and the number dropped to 35 in 2018. This isn’t because we were testing fewer models; Samsung simply released fewer sets. The scores haven’t changed dramatically, and while some handy features have been introduced, such as searching for shows with your voice and the universal guide that recommends shows to you, if you have a Best Buy Samsung from 2016 you’re not really missing out on a great deal if you didn’t upgrade in 2018.