Some popular mobile phone brands could be overstating the battery life their phones are capable of – but three of five actually deliver more than they promise, according to a Which? snapshot investigation.

We compared the claimed average talk time for popular phones with results from our test labs and found Apple and HTC overstated how long their phones would last.

Nokia, Samsung and Sony all understated, meaning you may end up seeing your phone last longer than you think.

The best smart phones from our tests are great all rounders – be sure to check in before you buy. 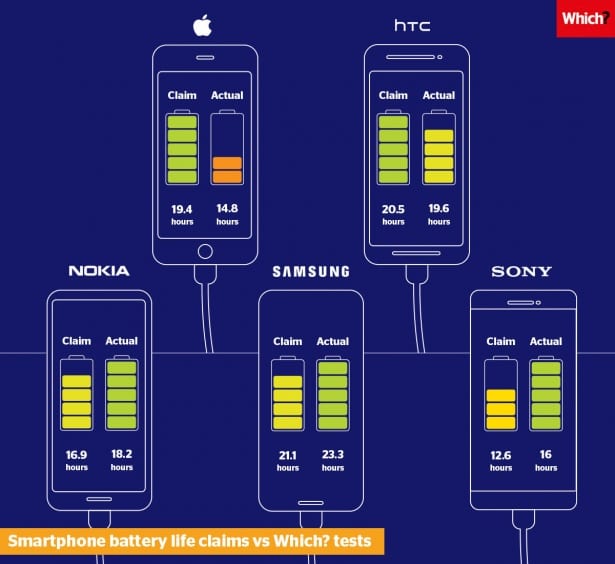 To run our comparison, we looked at the manufacturers’ claimed talk time for more than 50 mobile phones from five popular brands, with a minimum of six phones per brand. We used this data to calculate an average talk time for each brand and compared it to the actual talk time we got from our tests.

Data from the Which? lab tests show that on average, Apple and HTC claim a higher talk time on their phones, with Apple being the worst offender for untrue claims.

We found that Apple overestimated its talk time by 31% on average. We’ve also discovered that each of the nine iPhones we compared performed worse than Apple’s battery time claims.

On the other hand, Nokia, Samsung and Sony all claimed a shorter talk time on average than we found in our tests. In particular, Sony’s claims were 21% lower than their phones actually lasted for talk time for all but one of the 17 phones we looked at.

Apple iPhone XR – claimed to last 51% longer than Which? tests 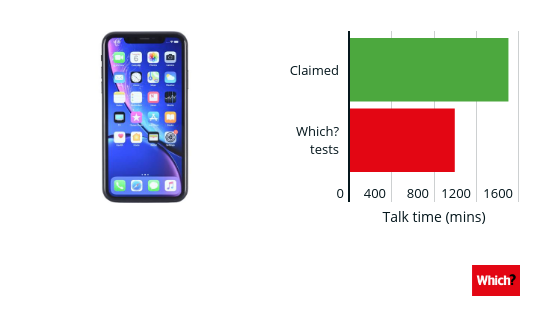 Surprisingly, the Apple’s iPhone XR launched in October 2018 had the biggest battery overestimation for talk time on a full charge. Apple claimed it would last 25 hours but our tests revealed that it lasted 16 hours and 32 minutes – just shy of 8.5 hours less than promised. 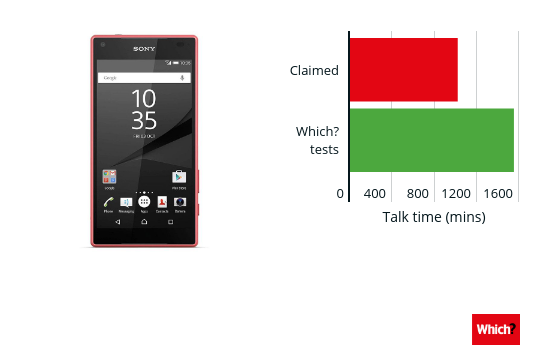 Sony was out by about the same amount – but in its case delivered nearly nine hours of extra talk time. The Xperia Z5 Compact was released in 2015 with a claimed talk time to the tune of 17 hours. In fact, it lasted 25 hours and 52 minutes.

Apple told Which? that it rigorously tests products and stands behind its battery claims, and HTC said it diligently tests all aspects of performance and differences in testing environments may have resulted in the variation we found.

The Which? mobile phone battery test

We also run a number of other tests, including how long a phone takes to charge, and how long it lasts on a 15-minute charge.

When deciding whether a phone will have good battery life, your first instinct might be to check the battery size (measured in mAh, or ‘milliampere hour’) – the most common way of expressing a phone’s battery capacity.

Phones can have as much as 5000mAh battery but a larger capacity doesn’t guarantee the battery will last longer. We often see phones with smaller-capacity batteries outperform larger ones, with many other factors playing a part in how long a phone actually lasts.

Battery technology is proving difficult to truly revolutionise, but if battery life is a priority for you, developments in charging technology mean there are some genuinely useful features to look out for.

Phones with quick-charge capabilities are capable of charging far more quickly than standard models – a true game-changer if you’re in a hurry. You’ll need to use the correct charger – usually supplied with the phone, to get the benefit, but we’re seeing an increasing number of models, such as the Oppo RX17 Pro, that push the boundaries of what’s possible. More and more phones now include this as standard, so it shouldn’t be difficult to find the next time you upgrade your handset.

Our tests can tell you exactly how much a phone can deliver after just 15 minutes – we’ve found models that charged up to 54%, while the worst only muster up 7%. 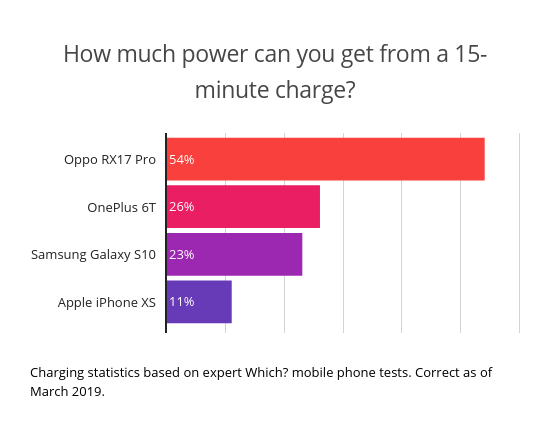 Wireless charging is becoming increasingly popular with phones. Interest has grown further since Samsung’s Galaxy S10 range and Wireless PowerShare technology, which allows you to share your phone’s battery with another phone or other devices such as smartwatches. Wireless charging is most commonly used to charge a phone on a charging pad, without the need for a traditional cable.

Sometimes the ‘old’ ways are best – a portable power bank is still a must-have accessory for people who use not just mobile phones, but tablets, laptops and other gadgets away from home. Available in low, medium or high capacity, your choice will likely come down to price and portability.

However, we’ve also found that what’s stated ‘on the tin’ in terms of the amount of power a power bank can hold doesn’t always ring true. We’ve looked at some of the most popular power banks from brands such as Belkin, Juice and Energizer and found that the worst delivered just 54% of its stated power. Read our guide on the Best portable power bank charger for more.

Buying a phone with good battery life doesn’t need to be a game of roulette. Our in-depth battery testing has shown that some brands are consistently better than others where battery is concerned. But there are exceptions to the rules and our tests are completely impartial.