Microsoft is constantly updating Windows 10 with security and bug fixes, but twice a year it also launches a ‘feature’ update, which adds new functions, tools and design elements that it hopes will make your computer easier to use.

Microsoft’s Windows 10 May 2019 update is now available to download. It contains a raft of improvements and new features, although you may not be able to get it yet because Microsoft staggers updates to ensure they don’t cause problems so your computer may not automatically upgrade to it for several months. This hasn’t always gone to plan, as our investigation into Windows 10 updates revealed. In fact, this time around, Microsoft is rolling out this update even more slowly than previous versions to minimise major disruption.

Looking to upgrade your computer? Browse all the best laptops from our tests.

Here are a selection of the new features that you’ll get once you install the latest update (called 1903 officially).

If you don’t want your computer to restart and spend 20 minutes updating just before an important meeting, presentation or your next round of Fortnite, Microsoft is adding a feature that lets you suspend updates for up to 35 days. You’ll have to suspend the update once a week up to a maximum of five times, so while this is definitely a step forward, it won’t be helpful if you know for sure that the update will break a piece of software or hardware (like an old printer or scanner).

One of the most common issues Which? members have found with Windows 10 is their computer trying to update but running out of space, and reverting to the previous version, wasting minutes, if not hours. From the next update, Windows 10 will try to reserve 7GB of space on your hard drive for updates. This will make this space untouchable to the user, meaning you shouldn’t experience any more update woes. It’s unclear how this will work on computers that don’t have 7GB of free space to begin with.

Our guide on how to free up disk space in Windows 10 will help you prepare for future updates that require more space.

After adding a ‘Dark Theme’ to Windows 10 in October 2018, Microsoft has donned its white hat and added a lighter colour scheme as well. Various parts of the interface, such as the task bar, start menu and icons all get a white paint job.

Microsoft’s internet-connected assistant, Cortana, will no longer help out when you’re looking for files and programs on your computer using the Start Menu search bar. Microsoft has split the two up, so there are now two separate features for searching on your computer, and using Cortana to perform online tasks such as setting reminders, converting measurements and searching on the Bing search engine. 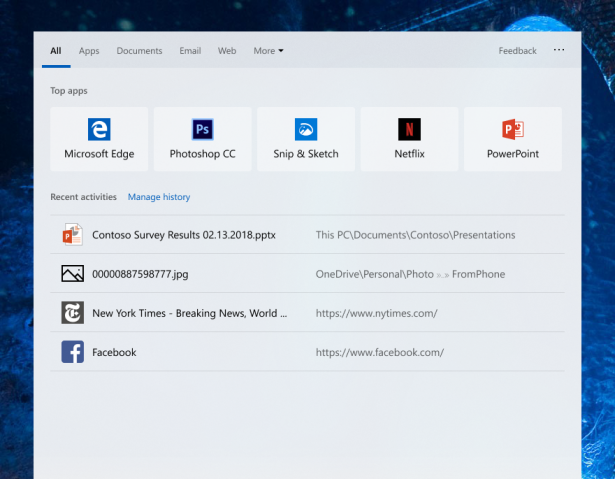 Plus, When you search for programs, your frequently-opened programs will appear at the top of the list before you start typing. This could prove handy if you like to keep your desktop and taskbar clear of icons, but still want easy access to your programs.

The October 2018 updated started being sent to computers last year, but was briefly suspended after a bug meant that some users lost files after updating. This issue, says Microsoft, has now been fixed.

If you use multiple computers in your daily life, this feature might interest you. Anything you select and copy will also be uploaded to a cloud service, allowing you to paste it on any other computer you’re logged in on. This is useful for moving small files or blocks of text instead of having to email them to yourself.

Even better, you’ll now be able to see a timeline of all the things you’ve copied. This means you can copy multiple things and still have access to them. Currently you can only ever have one copied item on the clipboard at the same time.

Sets is best thought about as a good way to manage tasks and projects. Instead of having a load of tabs open in a browser and some documents open in Word and Excel, instead you can group related documents and webpages together into ‘Sets’. For example, if you’re working on a photo album as a gift, you could have one window with multiple tabs that group your pictures, the captions you’ve written and the website you’re using to create the album all in one window, in different tabs. This grouping is known as a Set and should let you organise your common tasks in a more logical manner. This works in conjunction with Timeline, that was introduced in April (see below).

It’s the app that’s probably changed the least in the past decade, but Microsoft hasn’t forgotten about trusty Notepad. In the next update, this application will receive some new functions including the ability to zoom in on text (making it easier for those with sight problems to see what they’ve been writing) as well as improved find-replace, making it easier to make bulk changes in one fell swoop.

It sounds like an action movie, but really it’s just a less eye-searing version of the File Explorer you’re already familiar with. Instead of white, you can now set it to be black, making it less harsh on the eyes, especially at night.

Browse our guide to the best cheap laptops for great models under £300, and under £500.

These are the features that arrived with the Windows 10 April 2018 update. Many computers are yet to receive this update, so if you haven’t seen big changes to your computer recently, this is what to expect first.

The biggest change coming to Windows 10 is Timeline. While previously you would navigate through your tasks by opening files, webpages and programs, you can now also do so by scrolling back in time.

It’s another way of allowing you to see things you’ve recently been working on, be it a webpage you were reading yesterday or several weeks ago. If you scroll back far enough, you’ll be able to find it. 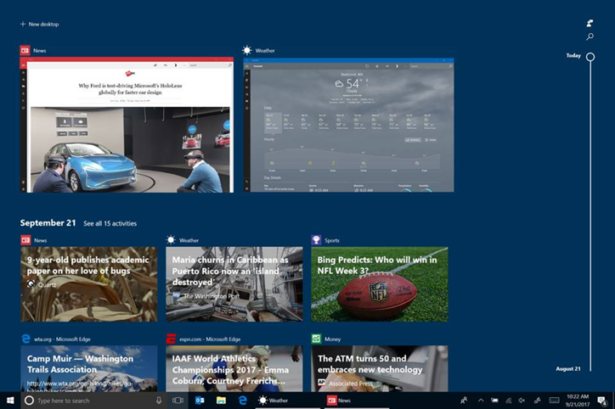 The feature will be of limited use to most people because it currently requires you to be using Microsoft-made programs such as the Edge web browser and Microsoft Office. The only way other programs will appear in Timeline is if the company that makes them chooses to add this feature, which takes time and effort.

A new design standard is coming to Windows 10 that includes more effects when your mouse cursor hovers over buttons, more translucent (as opposed to opaque) programs and easier-to-use menus.

The ability to control Windows 10 with your eyes (using hardware such as eye trackers made by Tobii) was added late last year in the Fall Creators Update. The Spring Creators Update will add extra features, including easier scrolling and navigation as well as the ability to pause eye tracking more easily.

Connecting wireless Bluetooth devices such as mice and headphones to Windows 10 machines should now be a lot quicker. Instead of having to manually connect each time, certain devices will be connected automatically.

You’ll now be able to activate and deactivate Windows’ so-called ‘S Mode’, which locks down the operating system so it can only run apps downloaded from the Windows Store, and Microsoft Edge is the only web browser you can use. This is great for users who want a more simple experience, and for those who want to control what their children can access on their computer.

Our guide on How to buy the best laptop can also help you choose between an Apple Mac, PC and Chromebook. 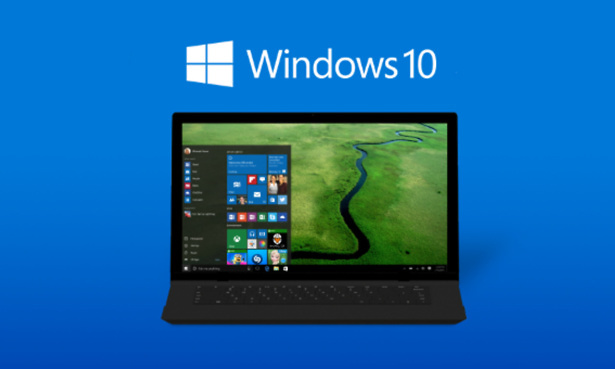 Can I stop Windows 10 updates?

When an update first launches, it’s distributed to a relatively small number of computers that, in theory, have been tested for compatibility with the latest software. Indeed, Microsoft says it ‘test[s] each major Windows 10 feature update with our OEM hardware partners prior to general availability to ensure the best experience on all compatible devices.’

Over the course of several months, more and more computers receive the update, supposedly when Microsoft is confident that your PC is fully compatible. By way of example, the ‘Fall Creators Update’ that launched last autumn is only just arriving on some computers.

Once your PC receives the update, you won’t be able to stop it there and then, but if it causes problems with any of your programs or settings, you can ‘roll back’ to the previous version of Windows 10 for up to 15 days after it’s installed.

If you’re within the time limit, you search for ‘settings’ in the Start Menu, open the Settings app and navigate to the Recovery menu. Within this menu there will be an option that says ‘Go back to the previous version of Windows 10’. Click on that and follow the instructions.

This won’t permanently prevent your computer from updating to the Spring Creators update, but should hopefully give you enough time to see whether the programs you’re having problems with can be fixed ahead of the next update.

Having problems with your laptop? Sign up to Which? Tech Support for one-to-one help from our technology experts.