Which? research has revealed 111 cars don’t have enough seat space for the average man to fit in the back, let alone anyone 6ft (1.83m) tall. Plus four cars that are so meagre on rear seat space the average adult woman couldn’t fit in either. If you regularly carry back-seat passengers, don’t get caught out – find out the worst offenders.

Our expert lab tests measure the maximum height a person can be to fit in the seats. We’ve found a whopping 294 cars where a person 6ft tall wouldn’t fit comfortably in the back. Either their head would hit the ceiling or there’s insufficient legroom.

As carmakers race to make their cars attractive to look at with sweeping falling rooflines, this risks being a growing problem of style over substance.

Make sure your car is fit for purpose for your passengers. Here, we highlight key cars you need to know about, plus scroll down to check our full list of cars with limited rear seat space.

Our independent lab tests give all the details you need to know – see our expert pick of the best cars for 2019. 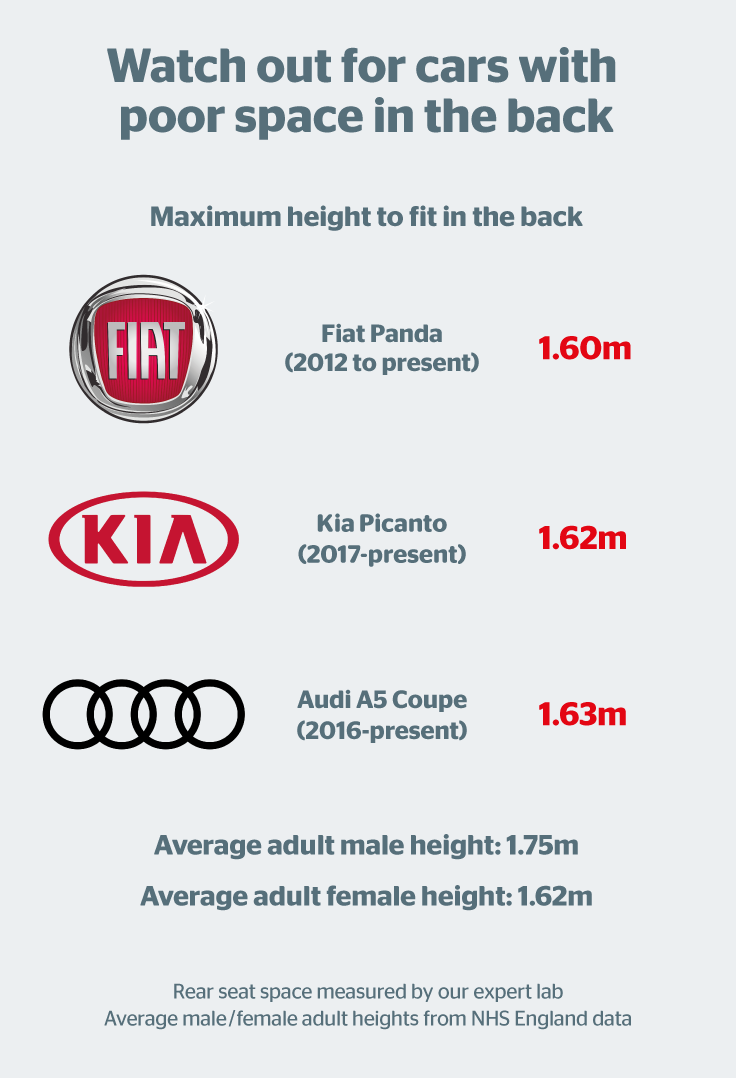 The cars in the graphic above are the worst cars available to buy new for rear seat space in their respective car classes (excluding sports cars).

Headroom and legroom are independently measured by our expert lab. When calculating seat space, both these measurements must be sufficient for us to say a person of a certain height will fit.

For each car, before measuring the rear seat space, the front seat is set up for a 6ft (1.83m) person.

Why some cars have low rear seat space

This issue isn’t just limited to small city cars. In the battle to make ever more striking, sporty-looking cars, manufacturers risk compromising on rear seat space even in their bigger cars.

We’ve even found many large cars (like the popular BMW 2-Series coupé) and SUVs (such as the Nissan Juke) where you’ll need to watch out if you’ve got tall back-seat passengers.

So even if you’re taking a larger car out for a test drive, don’t assume there will be enough space in the back. You can check our car reviews to find out the maximum height passengers will need to be to fit in the front or back. Which is a lot easier than measuring up yourself. 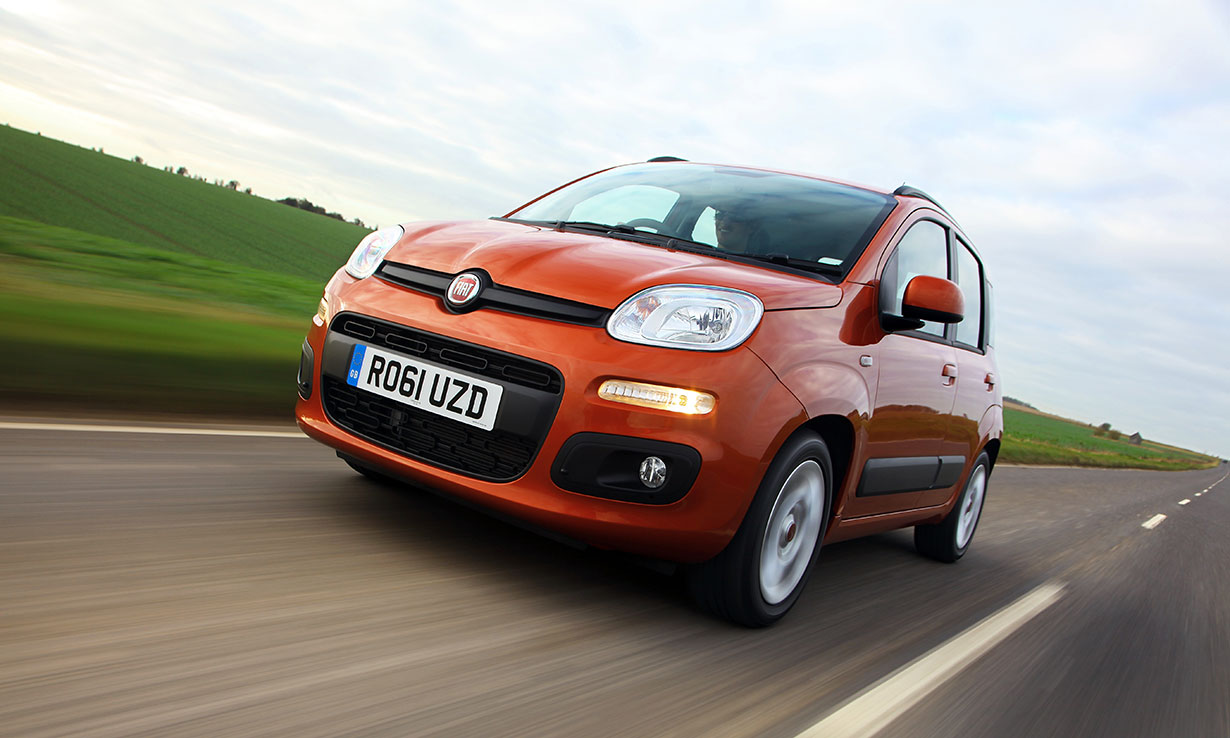 The Fiat Panda is the worst small car you can buy for rear seat space. Only people 1.6m tall or less can fit, which means the average woman would have to shift around to find 2cm, and the average man wouldn’t have a hope of a comfortable ride.

This third-generation Fiat Panda actually has slightly larger dimensions than its predecessor, keeping the unique shape and iconic third-side window.

Fiat has ingrained much of the interior with ‘P, A, N, D, A,’ which actually looks pretty good. Under the bonnet there’s a choice of a 69bhp 1.2-litre petrol engine or 1.3-litre Multijet II turbodiesel (80bhp if you go for the Panda Cross 4×4).

If you have young kids or your regular passengers are under 1.6m, could this be the ideal family car for you? Find out if it’s surprisingly practical or if it’s got something to hide – see our expert Fiat Panda review. 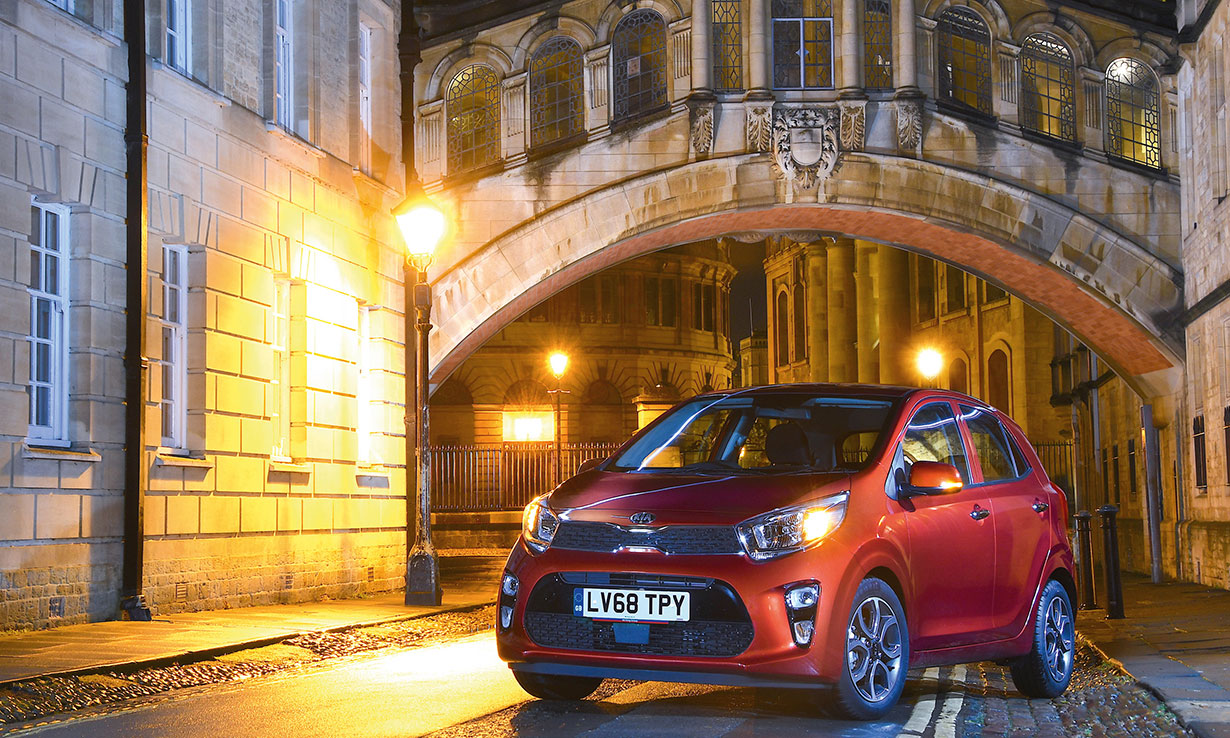 It’s no surprise that tiny city cars are lacking in space, but none have worse rear seat space than the current Kia Picanto.

Just like the Fiat Panda, the average woman could hit the ceiling or have cramped legroom, and the average man is half a foot too big – there’s no way they could be comfortable in this car, even for short journeys.

But if your regular passengers are under 1.6m, that won’t matter. If you’re considering buying a Picanto, here’s a quick overview on what you need to know.

Kia gives you a broad choice of five trim levels to choose from, badged from ‘1’ to ‘GT-Line S’. The top of the line offers sportier exterior and interior styling.

Space in the back not a problem for you? Check out whether this is the safe, reliable car for you in our rigorous Kia Picanto review. 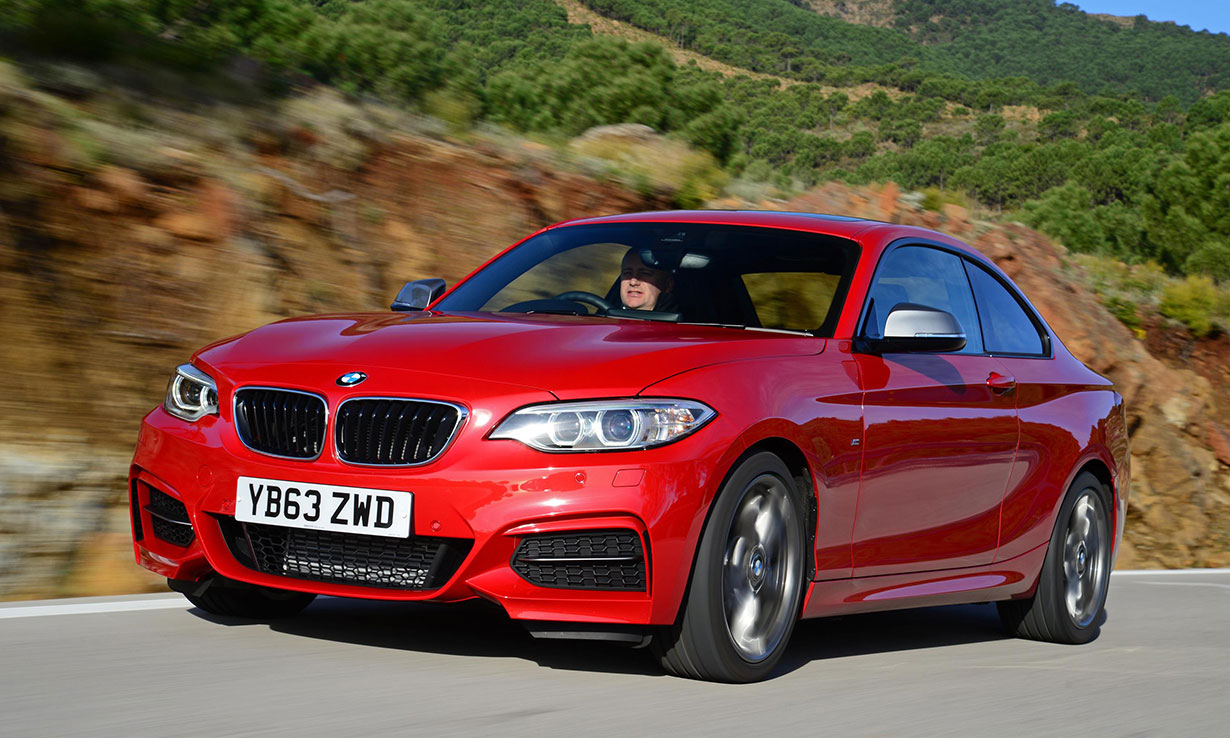 Coupé-design cars with a sweeping, falling roofline are popular with some buyers. Their standout looks eschew the more traditional boxy looks of some cars.

However, the BMW 2-Series coupé has the worst rear seat space of any new medium car you can buy new – except for one. And that one exception is the slightly worse convertible version of this car (which has 1cm less), where at least you could put back the roof when it’s dry.

The average adult man is almost 10cm too tall for the coupé, which would make for an uncomfortable ride.

This is a two-door car for a dramatic coupé aesthetic. There are 1.5-litre three cylinder or 2.0-litre four-cylinders petrol engines, with BMW’s hallmark smooth six-cylinder motor only available if you opt for the high-performance M240i model.

Diesels are all 2.0 litres in size. All models are rear-wheel-drive as standard – BMW’s xDrive four-wheel-drive system can be specified on 190hp diesel models only.

Don’t need lots of space in the rear seats? See whether this could be your dream car in our definitive BMW 2-Series review. 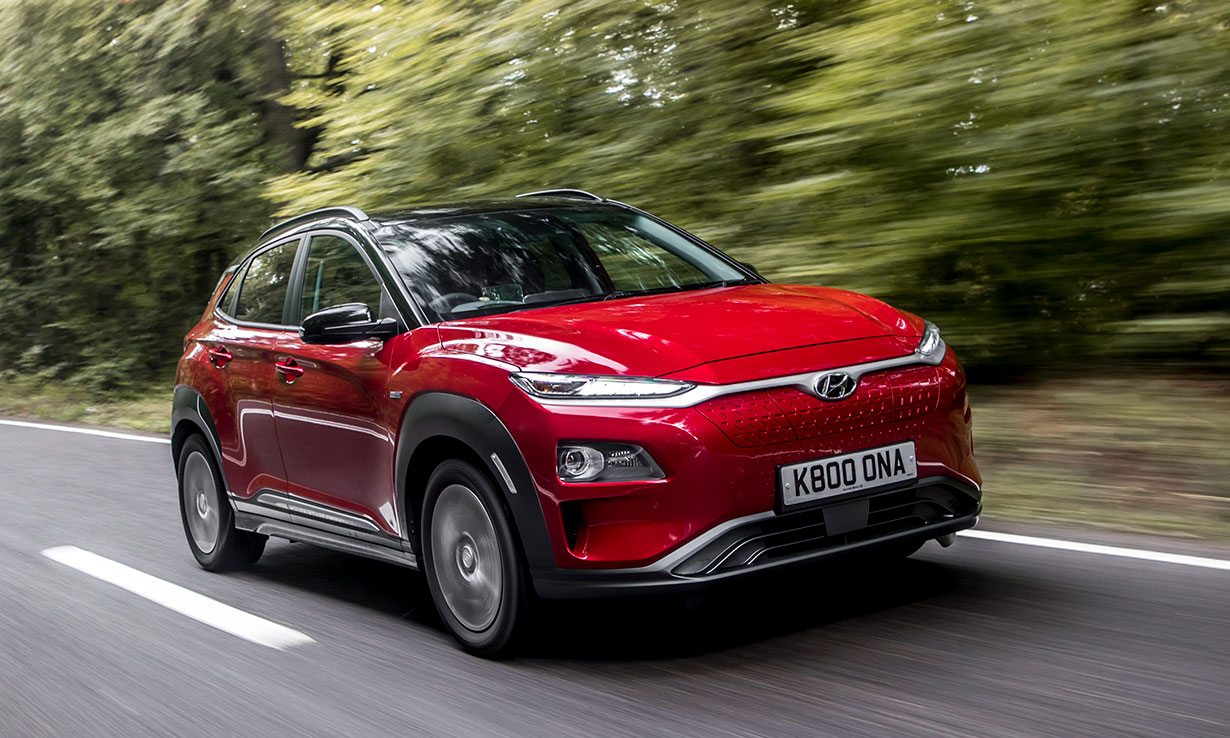 There aren’t currently many direct competitors to the Hyundai Kona Electric – an all-electric compact SUV. It sounds interesting, but buyers should beware that the average adult male will be cramped in the back, really needing 5cm more space than this car can provide.

There’s a choice of two ‘engines’ with different-sized battery packs available: a 135hp version with 39kWh batteries, or a 204hp model with 64kWh batteries.

These are Tesla-rivalling figures – impressive for a car of this price.

Are you considering an electric car? Find out if this car’s range claims ring true in our comprehensive Hyundai Kona Electric review. 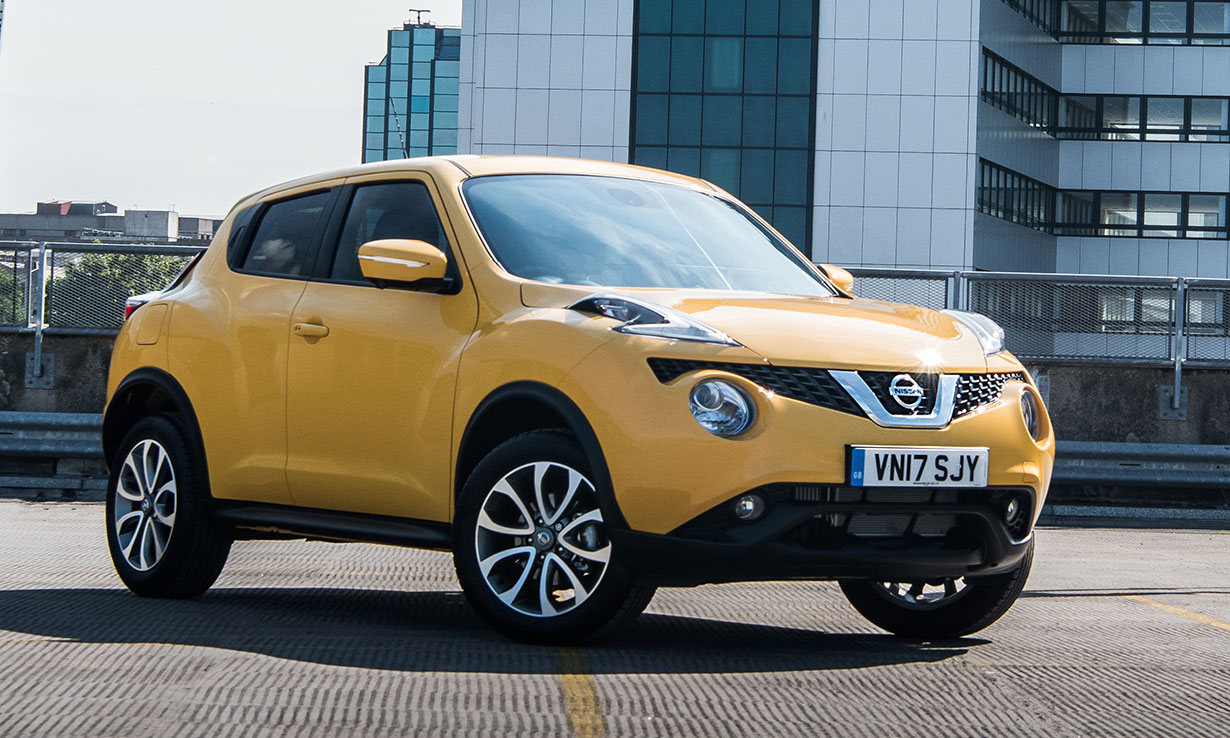 The Nissan Juke is a very popular compact SUV. But if you want enough rear seat space for taller adults, it could be one to avoid.

The average man (1.75m) would be a very tight fit, and anyone approaching 6ft wouldn’t want to try fitting in the back. Out of all the compact SUVs we’ve tested that you can buy new, the Juke has the second-worst rear seat space.

The absolute worst in this class is the Kona Electric’s older sister, the Hyundai Kona (2017 to present), with 1.73m rear seat space.

Nissan originally launched the Juke in 2010. It’s a bold new junior crossover that sits below the also-popular Nissan Qashqai.

The Nissan Juke was facelifted in 2014 with a redesigned boot that increased its capacity by around 100 litres to a total of about 350 litres. Though if you opt for all-wheel-drive, be aware that you’ll get slightly less boot space than front-wheel-drive models.

Has this car caught your eye? See whether it delivers the excellent fuel economy and fun drive you’d expect in our exclusive Nissan Juke review. 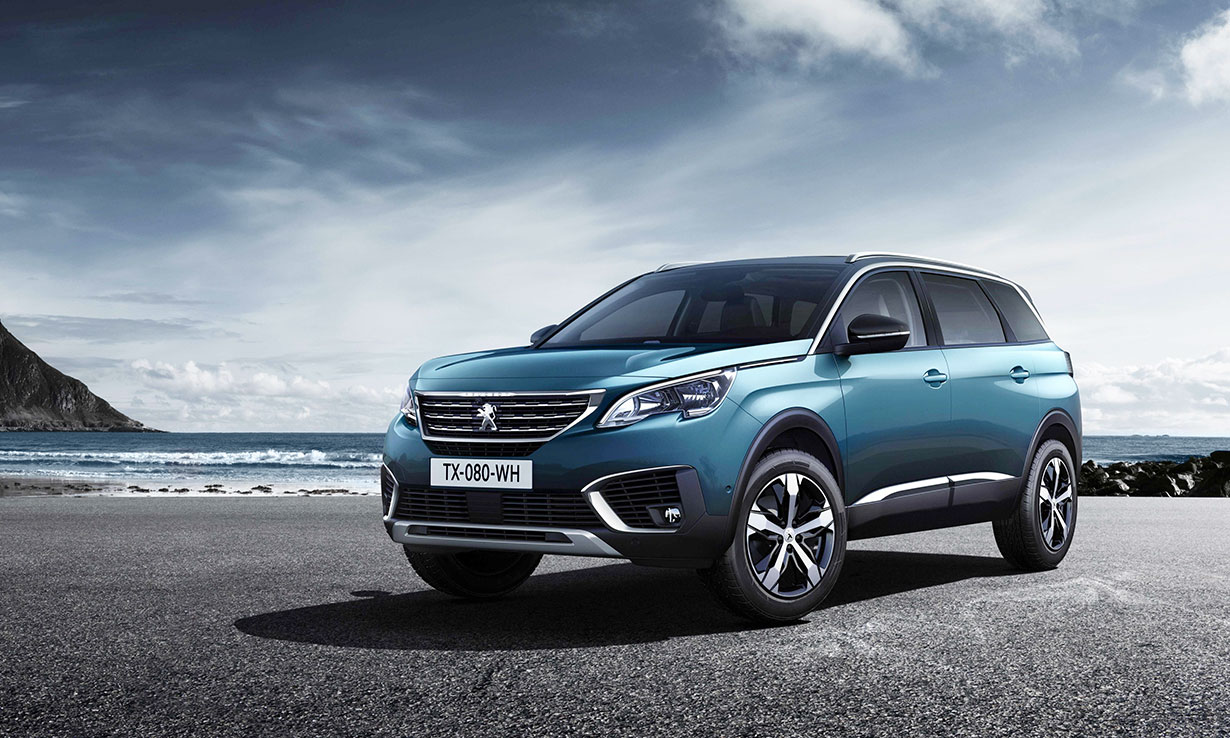 You might think that larger SUVs would offer plenty of space, but this isn’t necessarily the case if you’re 6ft tall or more and sitting in the back.

The Peugeot 5008 is the joint-worst mid-size SUV you can buy new for rear seat space, alongside the Suzuki SX4 S-Cross (2013 to present). There’s 6cm too little room for anyone 6ft tall attempting to fit in the rear.

The first generation Peugeot 5008 was an MPV, but this second-generation follows current trends by opting for butch SUV styling. However, it’s front-wheel-drive only, with no 4×4 option available, and maintains the seven-seat practicality of an MPV.

It’s considerably larger than the old 5008, but remains more compact than most SUV rivals. There’s a range of diesel engines from 100hp-180hp to choose from, and one petrol three-cylinder 1.2-litre with 130hp.

Could this be the car for you? Find out whether it has what it takes to excel in our demanding lab tests – see our expert Peugeot 5008 review.

294 out of around 850 cars we’ve tested lack insufficient rear seat space for those 6ft tall, our independent lab tests reveal. That’s over a third.

Check whether the car you’re thinking of buying is listed in the tables below.

We give every car we review a star rating out of five for seat space, so you can easily check at a glance whether the car offers plenty of room. Just click on any of our car reviews, then head to the ‘Test results’ tab 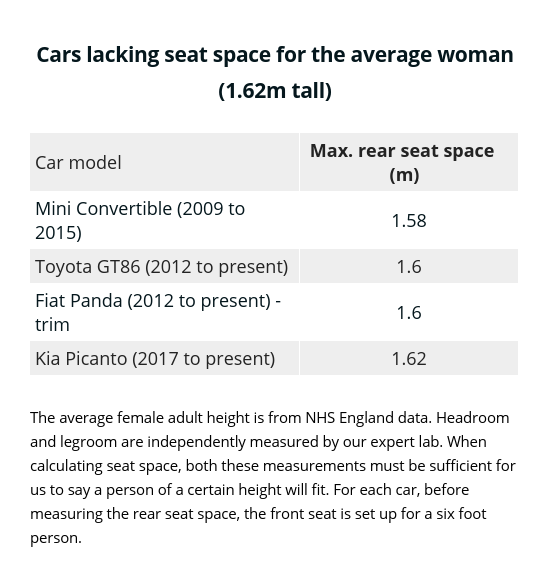