Even before you switch it on, the high-end Q85R QLED draws you in. The understated, barely-there bezel and narrow stand are minimal and beautiful. It looks expensive, and it is, but it’s just a small part of what Samsung has to offer in 2019.

For every £2,000 QLED, there’s a 7 Series model that costs a fraction of that. These cheaper sets are still 4K, support the same HDR formats, and go through the same set of tests as the most costly Samsung TVs on the market.

In our latest testing batch we had the cheapest TVs in Samsung’s line-up right next to some of the most expensive. Just how significant is the difference between these TVs, and should you be spending more this year?

The 7100 range is at the base of Samsung’s 2019 4K line-up, while the Q85R QLEDs are close to the summit. The table below shows the differences between them in terms of technology and features.

As you’d expect, the Q85R has a raft of extras and improvements, most notably the 4K Quantum Processor and Ultra Viewing Angle. The former upscales SD and HD content to close to 4K, using an ever-expanding catalogue of high-resolution images to refer to and sharpen whatever’s being displayed. The latter is designed to make light dispersal more even for a better picture when you’re sitting at an angle.

Is this new tech, plus the addition of Bixby voice control and a PVR, worth the extra money? 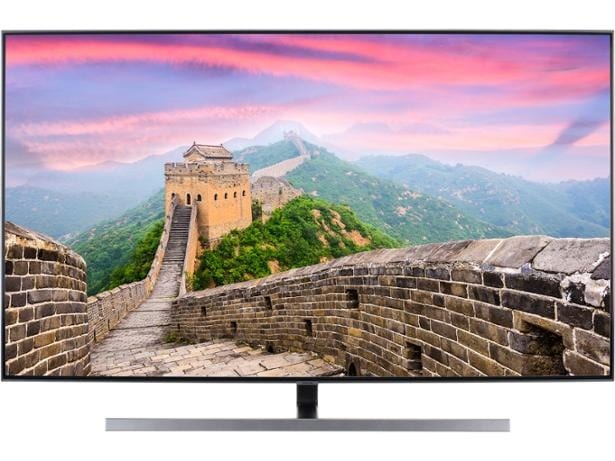 33 TVs separate the Q85R TVs from the 7100 range in Samsung’s line-up – that’s how many positions Hull City, which finished 13th in the Championship, was from Premier League winner Man City. Hull wouldn’t have much chance of besting the champions of England, but is the gulf in quality as great between Samsung’s two ranges?

If the Q85R is Man City, then the 4K Quantum Processor is Bernardo Silva. It’s the driving force of the TV that dictates picture quality – and it does so in style. The Q85R has a deep subs bench, too, with features to spare. The separate connections box houses all the HDMI and USB inputs rather than having them at the back, which means you only have one thin, almost transparent cable connecting to the TV. It makes for a neater look and gives you more freedom over where you put your additional devices.

There’s ambient mode, too. Don’t fancy a black screen sitting resolute in your living room? Then liven it up a bit with works of art, personal photos and even live wallpapers. If you’d rather the TV blend in, then you can have it mimic the pattern on your living-room wall.

The 7100s don’t have any of these bells and whistles, but these extras don’t factor into our scores much, either. We’re much more interested in how the TVs look and sound, and how easy they are to use. Some of Samsung’s QLEDs have come up short in 2019; are the Q85R models any different? 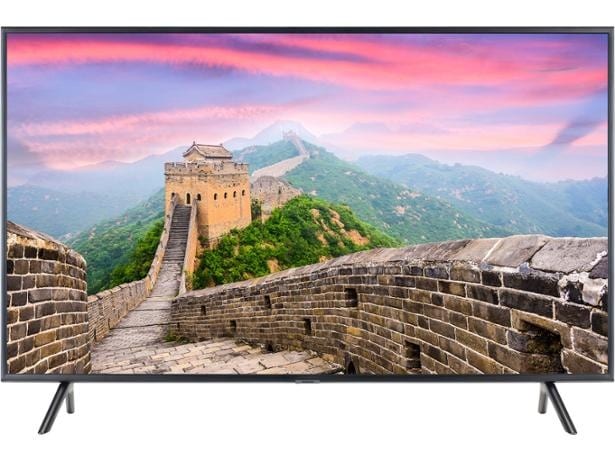 We tested the UE50RU7100, Samsung’s cheapest 50-inch 4K TV, in our latest batch. With a launch price of just £499, it’s likely to be one of Samsung’s most popular models. We had to wait months before we saw a new TV reach this price in 2018, and it shows just how efficient the manufacturing process has become.

That’s not the only reason for the 7100’s lower price, though. The remote is basic and old-fashioned, and there’s no PVR for recording shows on to a USB hard drive. A traditional, clunky remote isn’t the end of the world, but it means you don’t get Bixby voice control either. It’s a shame because we thought searching for things to watch with voice commands was streamlined and useful.

All of the above are secondary to picture and sound quality, of course. Samsung’s 7 Series sets have been a mixed bag this year, but so have its QLEDs. We know manufacturers focus more on big-screen sets, so will this 50-inch, and the unusually sized 58-inch model, be the pick of the 7100 range?

Differences are thin on the ground: only the design of the TV and the remote separates them. Mark 2019 as a landmark year, though, as the white TV has returned. The 7410 has a white bezel, the 7400 is black and the 7470 is silver.

They’re more expensive than the 7100 range, although you do get Bixby and a PVR built in. But is there also a step up in picture and sound quality?

We’ve had more QLEDs in our lab, too. The Q80R range sits just below the Q85Rs and, despite the differences in specifications being minor, you can pay up to £300 less for one.

Do the negligible differences mean you can save yourself some money by going for the cheaper QLED range?