We love curves. Something about the smooth, subtly sweeping lines speaks to us on a level that hard angles can’t quite replicate. Perhaps that’s why Samsung is still committed to curved TVs with its 7300 range.

Numerous studies have been conducted to ascertain why loops, twists and curls can evoke a more positive response than straight lines, sharp edges and cubist angles. For instance, a study by Oshin Vartanian found that people considered rooms filled with curved furniture to be more beautiful than ones with angular fittings.

So, science says we are hardwired to find Samsung’s newly launched UE49RU7300, UE55RU7300 and UE65RU7300 curved TVs more easy on the eye, yet it’s the only manufacturer still producing these angled screens.

We’ve also tested Samsung’s latest high-end QLED TVs to see how good your favourite shows will look, how lovely they’ll sound and how intuitive these TVs are to use. But when it comes to aesthetics, we’ll leave that up to you.

Jump straight to our LG vs Samsung TVs page to see which comes out on top in our testing. 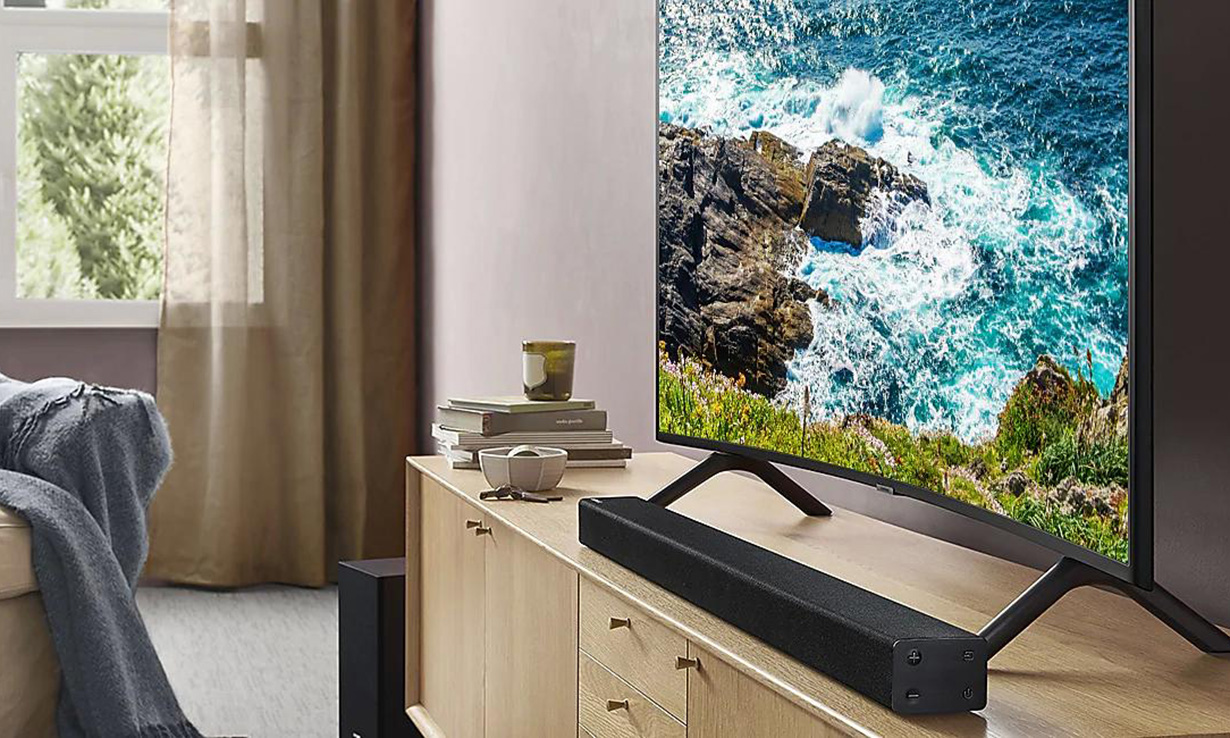 Samsung’s only new curved line for 2019 is one of its most basic, but that doesn’t necessarily mean they will be poor. Cheap TVs can excel, almost as if a lack of features has led to more focus on the fundamentals.

Not all the features have been stripped away though; the 7300s are still smart and have the Universal Guide. This handy tool recommends shows and movies to you based on the genres you like most and what you’ve been watching. With so many channels and apps to sift through, having something to flag stuff you’ll like is a great time saver. HDR10+ is supported too – this is one of the more advanced formats that adjusts picture contrast dynamically, to avoid scenes looking too bright or dark.

We’ve been wary of curved sets in the past because our own scientific tests have found that the curve can narrow the optimum viewing angle. But flatscreen TVs aren’t impervious to this issue either, and several that we’ve tested have been worse than some curved models.

So where do the three 7300 TVs lie? Does their lack of features align with a lack of quality, or are these basic TVs with low prices and serious prowess? Pick the size that suits you to read the full review: 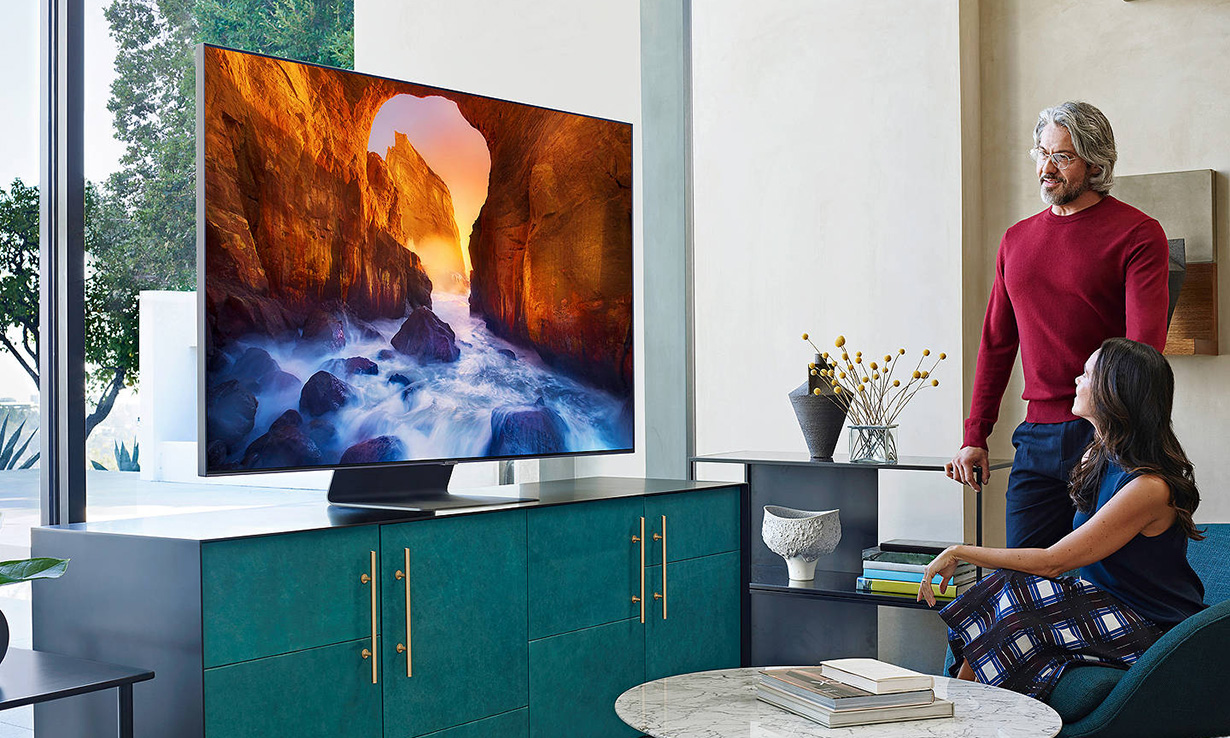 The curved range is basic, the Q90R is most certainly not. 8K TVs aside, the QE55Q90R and QE65Q90R should be untouchable, awe-inspiring and peerless. The elephant in the room is an OLED of course. Samsung rates its own QLED tech over OLED screens. They still use a backlight, where OLEDs don’t, but the bulbs illuminate quantum dots, which are said to produce more vibrant colours than the liquid crystals in LCD displays.

That’s all well and good, but the bigger question is whether they produce more vibrant colours than OLED displays and if they can match them for contrast.

There are more strings to the Q90R’s bow than just quantum dots though. Several features that are unique to Samsung’s top-tier ranges make them an attractive prospect. Ambient Mode turns your TV into a chameleon that can mimic the pattern on the wall behind it, or even display works of art. It’s a clever idea to help large TVs become a more attractive part of a living room when not in use. 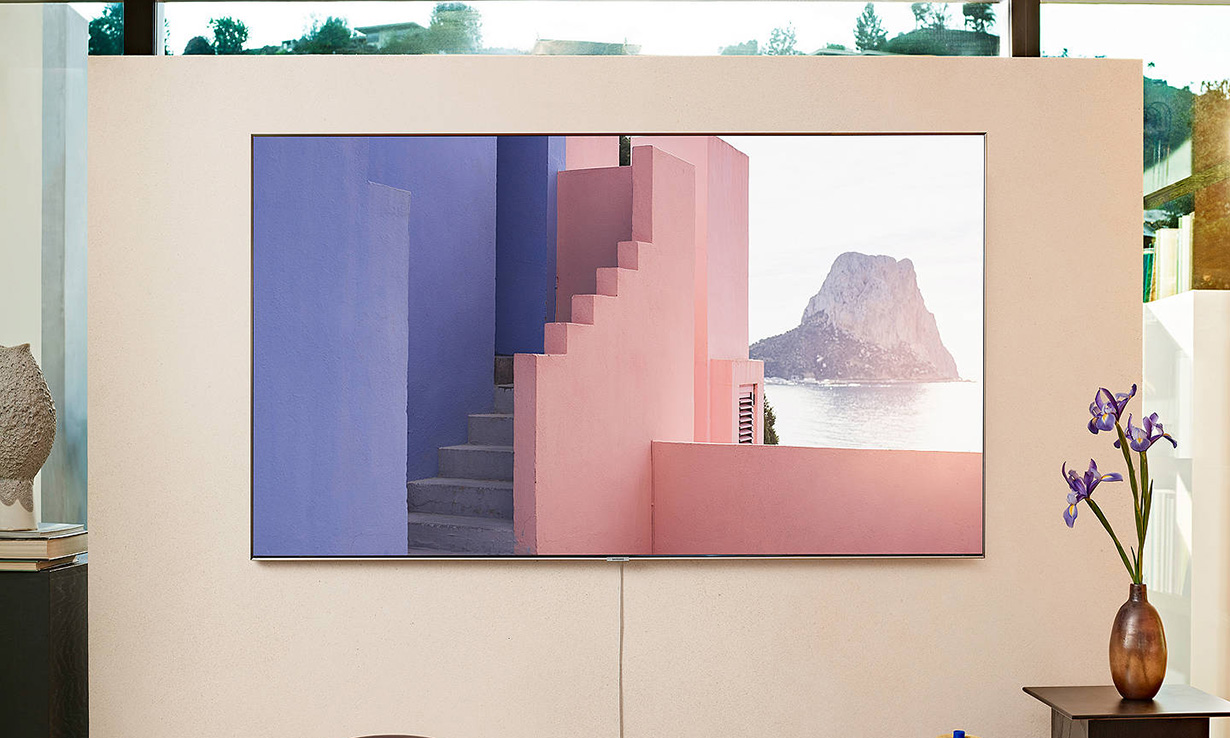 The separate connections box helps with that too. The HDMI inputs and USB ports are housed inside it, so only one thin wire is connected to your TV.

These features are neat, but they don’t come close to justifying the enormous price of these TVs. The 4K Quantum Processor, which is new to Samsung’s QLEDs in 2019, needs to produce astoundingly crisp images, gleaming whites, stygian blacks, and a rich kaleidoscope of colours; oh, and they need to sound spectacular too. Essentially, the Q90Rs can’t afford to put a foot wrong, and if they have we’ll know about it.

We’ve reviewed the 55 and 65-inch Q90Rs, so click through to the reviews to see which came out on top and if either are worth forking out more than £2,000 for.