New figures from a report on ransomware cases over the past year have revealed a surge in ‘highly targeted attacks’ on businesses.

The report, published by antivirus maker Malwarebytes, highlights the inescapable dangers of data-grabbing computer nasties. But although the security-savvy brand mentions a rise in attacks aimed at larger groups, everyday consumers aren’t under the same pressure.

How bad is the ransomware situation in the UK?

As part of its report, Malwarebytes has ranked countries by ransomware detections. The UK is sat in third place, responsible for 9% of detections between June 2018 and June 2019. Canada is slightly ahead at 10%, but the gap between Canada and the United States is enormous. 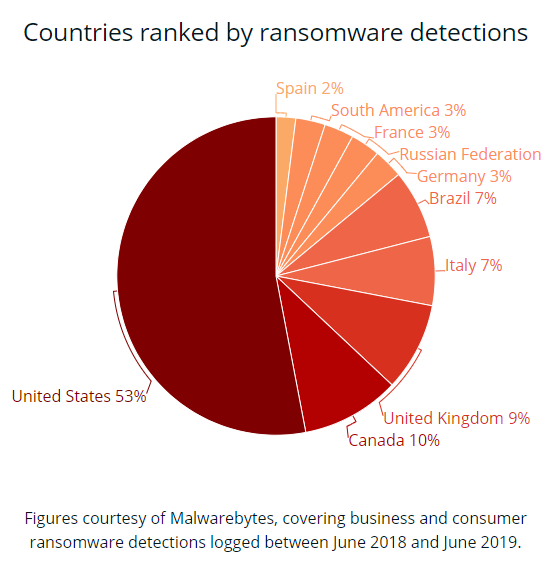 Although the US is miles ahead here, these figures from Malwarebytes suggest that the UK is still the worst in Europe for ransomware detections. However, the lion’s share of ransomware attacks appear to be targeting small businesses rather than consumers – not surprising when you consider that malicious groups stand to benefit far more by ransoming organisations over individuals.

Malwarebytes notes ‘an almost constant increase in business detections of ransomware’, with numbers shooting up by a whopping 365% between Q2 2018 and Q2 2019. However, consumer detections have been decreasing almost 12% year-on-year.

Attacks may not be as common as they were in 2016, but keeping yourself protected with antivirus software is still extremely important.

How ransomware is evolving

Ransomware is constantly adapting to infect different devices, which means keeping your antivirus software updated is vital. At the time of writing, there are five major strains of ransomware:

As ransomware makers take on big corporations, they’re evolving their tactics to force victims into paying up. Looking ahead, Malwarebytes predicts that ransomware families will team up to have a bigger impact:

The security firm also expects to see a rise in ‘manual infections’, which would mean infecting a PC without having to rely on the owner accidentally clicking a malicious advert or file.

Learn more about ransomware and how to prevent it with our guide.

Antivirus software in the Which? test lab

We’ve put a wide range of antivirus tools through our tough tests to find the packages that you can trust to protect you against the latest threats. Click through using the links below for our detailed review.

You can download a free version of Avast Internet Security right away, but the paid-for alternative adds some extra features. One of them is real-time protection against ransomware and phishing, battling against viruses that try to lock up your files.

By paying for a single AVG licence, you’re able to add unlimited devices to your subscription. AVG has anti-ransomware protection built-in, aiming to uncover malware during scans and ensuring your files aren’t wrongly quarantined. We tried it in our test lab to see just how effective it really is.

Romanian cybersecurity firm Bitdefender is one of the biggest antivirus software companies around. Its paid-for software targets online threats, including ransomware and phishing attacks. Bitdefender is compatible with both Windows and Mac computers, along with Android and iOS gadgets.

The paid-for version of Bitdefender includes a password manager tool which stores your details away from prying eyes. See if this antivirus software is worthy of being made a Best Buy with our full Bitdefender Internet Security 2019 review.

Our expert antivirus software reviews, based on independent tests, will help you protect your computer from scams and viruses online.