Another year, another September iPhone launch. Apple CEO Tim Cook had plenty to chat about as he took to the stage at the Steve Jobs Theater in California. New, ‘professional’ iPhone models are here, although buyers on a budget are likely to be disappointed.

Between the enthusiastic claps and whooping, Apple just about had time to show off five new products – a new iPad, the iPhone 11, iPhone 11 Pro, iPhone 11 Pro Max and Apple Watch Series 5.

The new devices are available to buy on 20 September, with pre-orders for the iPhones starting on 13 September.

Perhaps most notable is the fact that none of the new models will be 5G compatible, but Apple had other new features on offer to try and tempt you. See what each of the new arrivals has to offer below, and if you’re not on board quite yet, how the launch could be a great chance to make some savings.

It’s only been a year since the iPhone XR, iPhone XS and iPhone XS Max were launched. But this week choosing a new iPhone just got a little trickier, with even more options to consider.

We’ll kick off with the iPhone 11. Dressed in an iconic aluminium and glass Apple suit, the iPhone 11 has a 6.1-inch Retina display. It runs on iOS 13, which adds various new features including a dark mode, portrait lighting toggles and a brainier Siri.

Design-wise, the front of the phone isn’t worlds apart from the iPhone XS – the noticeable changes are on the back. Flip over the iPhone 11 and you’ll see a new camera setup, with a pair of 12Mp cameras now sat inside a square partition with rounded edges.

Both rear cameras can shoot in 4K at a silky-smooth 60fps, making it trickier than ever to take a bad video on an iPhone. Apple’s own Night mode aims to take some attention away from the Google Pixel’s Night Sight tool. Apple’s shooting mode turns on automatically in low light and makes things clearer without compromising colour accuracy. We’re excited to try it out in our test lab.

The front camera has been treated to an upgrade, too – the 12Mp selfie camera on the iPhone 11 now supports slo-mo selfies, or ‘Slofies’ as Apple puts it.

The iPhone 11 comes in a range of colours – purple, yellow, green, black, white and red. It may be the cheapest new iPhone, but it’s not really that cheap at all, with prices starting at £729. Still, on paper, it looks like you’re getting plenty of bang for your buck. 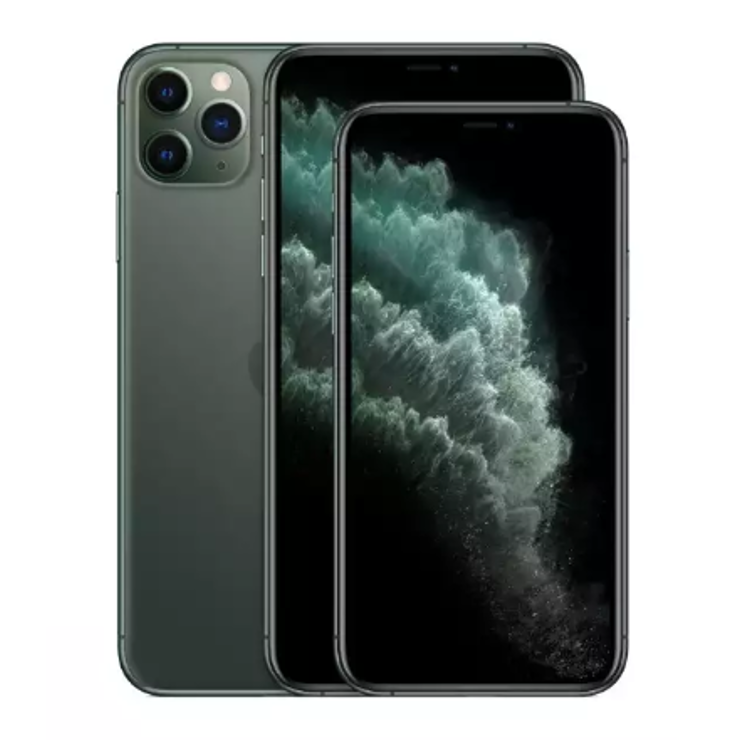 Apple’s first ‘Pro’ smartphone is using a three-camera setup to justify its fancy name. It’s powered by the same A13 Bionic Chip that keeps the iPhone 11 ticking over.

The iPhone 11 Pro has a smaller screen than the iPhone 11, at 5.8 inches, but offers improved screen resolution, more Ram and a larger battery. In theory, that should make it better equipped to handle photo editing, video editing and multitasking. We’ll see whether or not that’s the case when we go hands-on in the Which? test lab.

On the back of the iPhone 11 Pro is a 12Mp ultra-wide camera, a 12Mp wide camera and a 12Mp telephoto camera. Apple is confident that its ultra-wide camera will help you cram everything you need into a single photo. As you zoom in from the Camera app, the iPhone will automatically pick the best lens for the job.

Once you’ve taken some 4K videos with the iPhone 11 Pro, you’ll be able to edit your masterpiece with the built-in editor that Apple has apparently improved for iOS 13. It lets you rotate photos and videos and play around with filters.

But if you want the best that Apple has to offer, you’ll have your heart set on the iPhone 11 Pro Max. Unsurprisingly, it doesn’t come cheap – prices start at £1,149 and rise to an eye-watering £1,499.

The iPhone 11 Pro Max is the largest of Apple’s new mobiles, with a 6.5-inch display. It has the highest-resolution screen of the lot, but runs on the same processor. You still get three cameras on the back.

Is it a good time to buy an older iPhone?

With Apple’s new iPhones on the way, now could be the perfect time to save money on an older model. If you’re not too fussed about owning the latest iPhone with updated processors and triple cameras, take a look at some of our tested models:

Visually, the Series 5 hasn’t changed too much from the Series 4: it has the same iconic rounded-square shape as before. But there’s a wider choice of cases, including a new ceramic case and natural-brushed titanium case.

Prices are the same as last year’s watches: Series 5 starts from £399 for a 40mm GPS-only watch with a case made from recycled aluminium. You’ll pay more for a stainless steel or titanium case, and a special band such as a leather loop or Milanese loop. 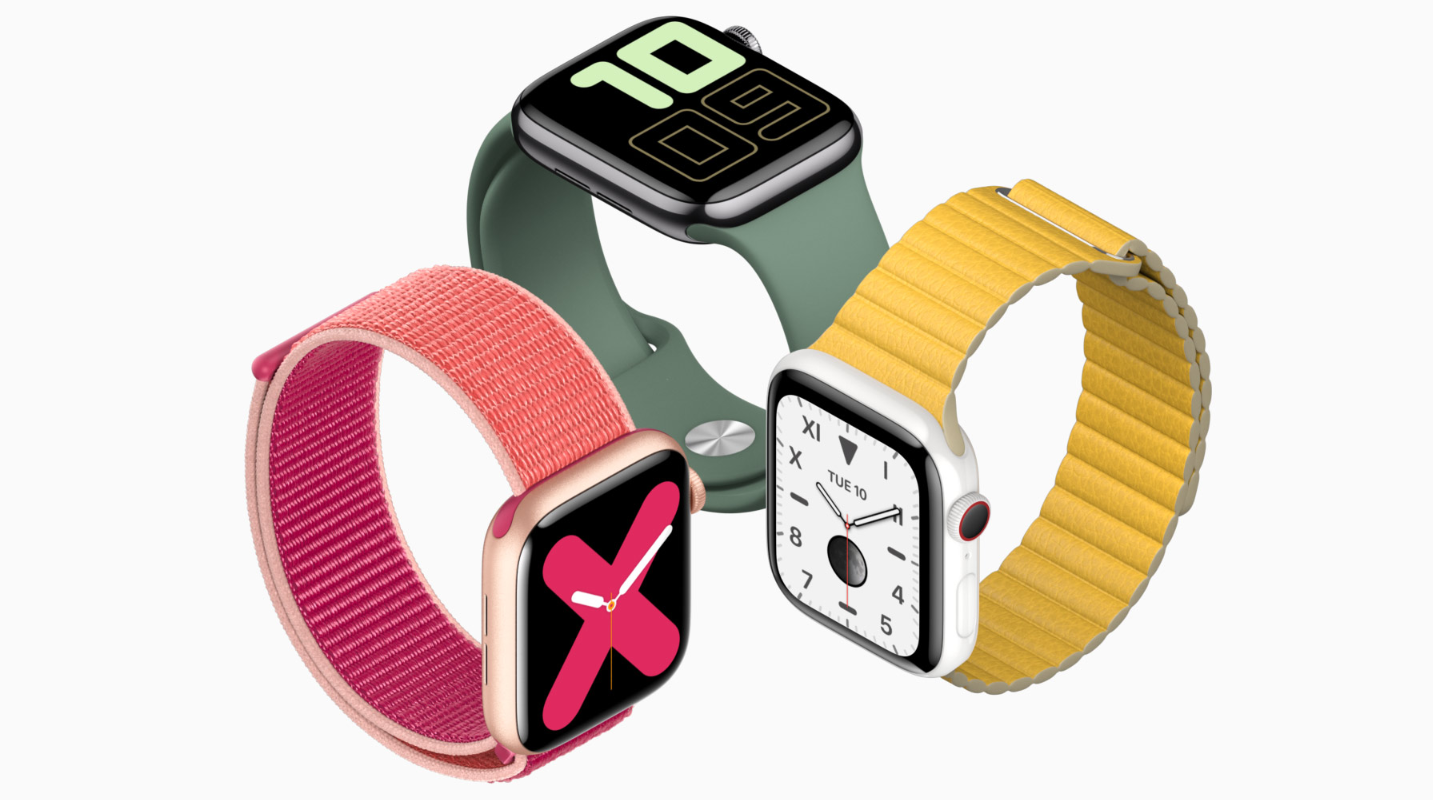 Versions with cellular (which you can use to make calls directly from your wrist, without needing your iPhone nearby) as well as GPS start from £499, plus provider fees.

As you might expect, you’ll also be able to get designer editions from Nike and Hermes.

The Series 5 now has an always-on display, so the screen won’t go dark when you lower your wrist: you’ll still be able to see the time and your ‘complications’. That should be handy if you want to see your exercise stats without interrupting your workout, you have your hands full or you simply don’t want to make it obvious that you’re checking the clock. Tapping the watch or turning your wrist will restore its full brightness. There’s also a new display driver and ambient light sensor.

It has all the cool features of the Series 4. Changes include a more sophisticated map feature, which will now tell you which way you’re facing, and a more detailed compass, which will now show things like latitude, longitude, incline and elevation.

As with the launch last year, Apple was keen to emphasise how the watch doesn’t just help you stay connected but can improve your health and even save your life. The safety features of the Apple Watch 4 have been updated: you can now call emergency services in many countries with the Series 5 just by holding down the crown button (cellular version only).

Apple has also teamed up with various research institutions such as the World Health Organisation (WHO) to take part in health studies, including a hearing study, a women’s health study (looking at issues such as infertility) and a study into cardiovascular health. There’s a new Apple research app that customers can use to share their stats with these institutions – apparently, Apple employees won’t be able to access this data. This app is only available in the USA at the moment; we don’t know yet if or when it will be rolled out to the UK.

The battery life will still just be 18 hours. Like last year, Apple is presenting this as a positive (all the extra features it’s adding won’t reduce the battery life). But you’re still effectively tied into charging it nightly.

In a surprise move, Apple also announced that it’s going to stop selling the Apple Watch Series 4, which was launched this time last year. We don’t know how long stocks will last in shops, but you’ll probably be able to find it online for a while. The Apple Watch Series 3 will drop in price to £199. You can pre-order the Series 5 now, and you’ll see it shops from the 20 September 2019.

Apple wasn’t finished there, and went on to introduce the next generation of iPad – a bigger version of its cheapest model. This new arrival has a 10.2-inch Retina display and adds support for Apple’s Smart Keyboard, a snap-on attachment that lets you type instead of tap.

This just-about-affordable tablet (in Apple terms) is powered by the A10 Fusion processor. It’s designed with multitasking in mind, letting you scribble notes on one side of the screen while you watch a video or read an article on the other.

If you own the Apple Pencil (which is sold separately and not bundled with the iPad), you can mark up notes on PDFs and annotate pictures before firing them back to a family member or co-worker over email. 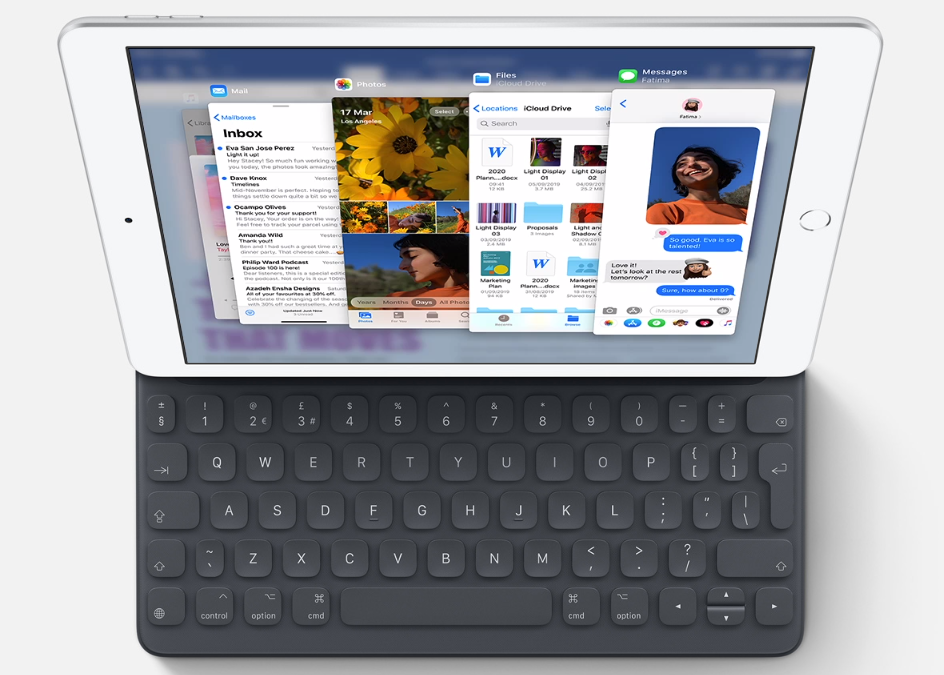 Apple TV+ – yet another Netflix rival

Apple says it’s on a mission to bring the best original stories to loyal Apple customers for a small monthly fee. Its own video streaming service, Apple TV+, is arriving on 1 November. Every month, new original content will be added to a growing library.

You won’t have to pay too much for a subscription to Apple TV+. Once the 7-day trial period expires, you’ll be paying £4.99/month. A single subscription gives you and five other family members access to the service, which Apple promises is ad-free and able to support offline viewing.