We started testing Hisense TVs in 2015. We expected shoppers to be seduced by the attractive TVs at attractive prices and we needed to know how Hisense was doing it. Was it narrow profit margins or shoddy quality that were keeping costs low?

In the four years since we tested our first Hisense, the oh-so memorable LTDN40K321UWTSEU, China’s number one TV brand hasn’t deviated from its mission to be held in the same esteem as any of the big players. It hasn’t raised its prices either, but it has got better at naming its TVs.

We’ve tested all but three of its 4K TVs in 2019, including its first OLED. It’s the ultimate test for Hisense, but also an incredible opportunity. It’s a technology that has become a byword for quality, stunning images, exceptional contrast control and vivacious colours; four things rarely said about Hisense sets.

The H55O8BUK could change all that. 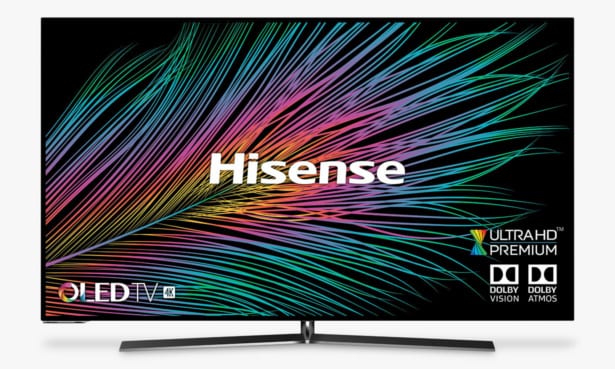 Its high-end range is gloriously uncomplicated, because it’s just the 55-inch H55O8BUK. And the simplicity extends to the design, too. A thin, slightly angled wedge of metal supports the 55-inch sheet of glass and minute LEDs.

When it’s turned off at least, the O8BUK can stand bezel to bezel with the best designs from LG, Panasonic, Samsung and Sony, but is it a different story with the power on?

‘The art of darkness’, Hisense’s marketing slogan, is a clever play on words and a reference to the consummate control OLEDs are designed to have over what areas of the screen are lit. Since each miniscule bulb can be turned off, OLEDs can display true absence of light, not just a simulation by a dimmed bulb. The opposite should be true, too. Whites should burn from the screen like a welder’s flame when the content demands it.

The OLED display, and its contrast control, is supported by Dolby Vision. This advanced HDR format adapts to suit each frame, responding to changes in scene, light sources and colour, to avoid whatever you’re watching looking too dark or bright.

Hisense hasn’t ignored sound either. It has sought the aid of Dolby once again to make sure this vital component of any top-tier TV isn’t forgotten. Dolby Atmos simulates surround sound, so the journey of the audio to your ear isn’t all a direct path from the TV. It should make for more dynamic, immersive sound, but it’s not the only essential ingredient. Dolby Atmos is sound processing: the speakers creating the audio are doing a huge amount of the work. If they aren’t up to scratch, Atmos won’t save it.

It’s fair to say that Hisense has had a rocky road in our testing lab, with far more bumps than smooth tarmac, but this OLED and the technology’s impressive track record could and should be its best TV. Read our Hisense H55O8BUK review to see if it lives up to the OLED pedigree. 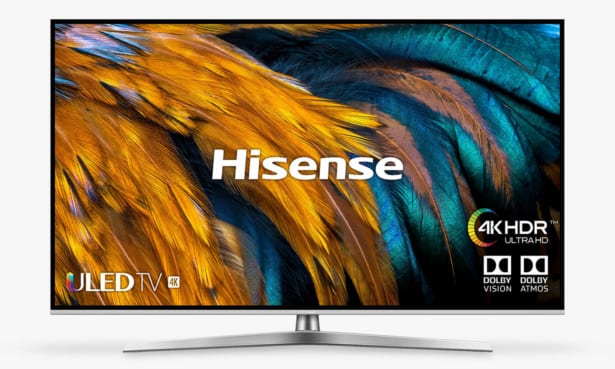 Before Hisense dabbled in OLEDs it made ULED TVs and it still does with its U7B range. It’s a general term for a combination of technologies designed to improve picture and sound quality.

Exactly what those various features are is tricky to ascertain, but the range benefits from Wide Colour Gamut, which does exactly what you’d expect. More colours should mean a more lifelike image. There’s also local dimming, which is technology related to the backlight. To create bright or dark scenes, bulbs in the backlight illuminate or dim; the more dimming zones a TV has the more control it has over what portions of the screen are lit.

HDR will help with contrast too and like the OLED all the TVs in the U7B range support Dolby Vision.

Inevitably the conversation with any Hisense range leads to price. The 50-inch model is just £549 at time of writing, making it significantly cheaper than similarly high-end LCD TVs from other brands, such as the LG 49SM8600PLA (£849), and the Samsung UE49RU8000 (£649). In terms of features and appearance there’s no discernible reason why the U7B range would be so cheap.

That’s why we tested them all. To see what witchcraft Hisense had magicked to keep costs down on such impressive sounding TVs. Read our reviews of the 50-inch H50U7BUK, 55-inch H55U7BUK and 65-inch H65U7BUK to see if whatever Faustian pact Hisense has struck has led to good TVs or bad ones. 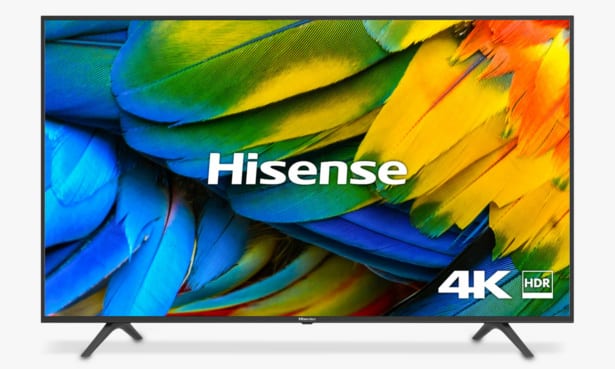 TVs don’t really get much cheaper than Hisense’s basic ranges and understandably they miss out on some of the features TVs higher up the range have, including Dolby Vision HDR and Dolby Atmos sound processing. The software in the TV is the same though. Hisense calls its operating system VIDAA U and on its website claims it has ‘Never been easier to use a smart TV’.

Smart features and how simple a TV is to use accounts for a fifth of the overall Which? score.

Picture and sound quality account for more than half though, and are by far the most important aspects of any TV. Entry-level TVs don’t always excel, and the odds are stacked against them as brands focus on high-end TVs with the best tech, but in 2019 we’ve found Best Buys in basic ranges, so it can be done.