Women who take time out of work to care for their children could end up with 40% less in pension savings than the average man in full-time employment, according to research by Which? and the Pensions Policy Institute.

While starting a family can be an exciting new chapter, the financial implications can be significant – as new mum, Victoria, from Edinburgh discovered when she found out she was pregnant with her first child.

In particular, pension savings can suffer. And while all parents are affected, women are disproportionately hit by the shortfall.

To address the gap, Which? is calling for the government to top up parents’ pensions pots.

Here, we look at how to address the gender pensions pay gap and how to make sure you save up enough for retirement.

Which? research found people who take time out of work to care for children are hit by a ‘parental pension penalty,’ leaving them with less money for retirement – and women are worst off.

The median full-time male worker saves £114,000 into a workplace pension during their career, according to our research.

By contrast, women who work part-time for 10 years in order to care for their children face a 40% reduction in pension savings. This means they’re only likely to have £68,000 to see them through retirement, which could last 20 to 30 years.

This disparity in pension savings mirrors the gender pay gap between men and women. A median female worker who stays in full-time employment is likely to save £83,000, which is 27% less than men.

‘I was really stressed about our finances’

Victoria, aged 33 from Edinburgh, decided to take time out of work when she found out she was pregnant with her daughter. Having been in full-time employment since she was 18, Victoria built up a career in marketing.

She said: ‘I’ve always worked and got my first job straight out of college in advertising when I was 18. I really enjoy working and being part of a team.’

While Victoria was excited to grow her family, the financial impact of going on maternity leave took its toll. 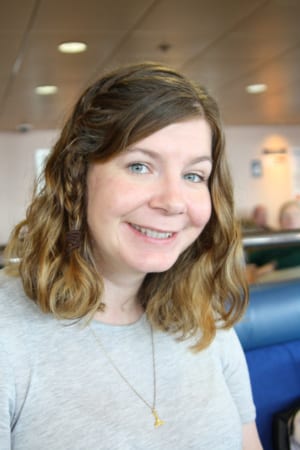 ‘Taking maternity leave was overwhelming at first and I was really stressed about our finances.

‘We hadn’t planned for the pregnancy and had a lot of financial commitments at the time, including a new mortgage. Working out how much extra things like nursery fees and childcare would cost was quite scary.

‘Discussing finances and even just checking the bank account added to the pressure. I felt I was letting my family down by not contributing financially.’

After checking with her employer, Victoria found that they would continue making pension contributions while she was on maternity leave, even though she stopped paying in. Employers aren’t under an obligation to keep contributing if you stop making payments.

‘I’m quite lucky that my employer is supportive, but I know a lot of mums who aren’t in the same boat.’

‘There’s a huge misconception surrounding maternity leave. I think people often view it as a year off, but it’s not like that at all. For new mums especially it can be a total whirlwind.’

‘I honestly don’t believe the government is doing enough and they should offer more support,’ she said.

Which? calls for government to pay ‘new parent’ lump sum

To help address the parental pension penalty, Which? Is calling on the government to pay a £2,000 ‘new parent’ lump sum.

This payment, once investment and compound returns are factored in, would offset the loss in pension savings from working part-time hours when children are at preschool.

Under Which?’s recommendation, each household would be able to choose which parent or guardian’s pension scheme the contribution should be made to.

Check out The Which Money Podcast episode below where we discuss addressing the gender pensions pay gap.

How else can parents top up their funds?

While government intervention could be a long way off, there are steps that can be taken today to limit the impact of the parental pension penalty.

Keep paying into your pension

If you’re thinking about taking time off to start a family, check whether your employer will keep making contributions if you keep paying into your pension.

When you take parental leave, the contribution you make to your pension will decrease, as the amount you have to pay in will be based on the new salary your company offers.

Your employer, on the other hand, will have to keep paying into your pension at the same rate as your salary before you went on leave.

Opting out of your workplace pension while you’re on parental leave means that you’ll miss out on free money from your employer, which you won’t be able to get back.

Applying for child benefit will ensure you build up National Insurance Credits while you’re caring for your child.

Where one of the partners is a high-income earner receiving over £50,000, you may have to start paying tax on any payments you receive. Over £60,000, the tax charge will effectively wipe out any benefit.

However, there’s another alternative. When you fill out the child benefit form, opt not to receive the actual payment.

This ensures that the person taking time out of work still receives National Insurance credits towards their state pension entitlement, without needing to worry about tax.

In addition to the new parent lump sum, further reform to workplace pension contributions through automatic enrolment is needed to make sure people save enough for retirement.

Auto-enrolment was introduced in 2012 to help workers save more into their pensions. The government made it mandatory for employers to automatically enrol eligible workers into a pension scheme.

The current minimum contribution for auto-enrolment is 8% of income. But Which? analysis has found is too low to secure workers a comfortable retirement.

Under the current minimum contribution, a middle-income earner might be able to save £114,000. Combined with their state pension, this might provide income of £13,500 a year.

Independent research conducted by Which? found that, on average, a single retired person needs an annual income of £20,000 to have a comfortable lifestyle, including essential expenses like groceries, transport and utilities, and the occasional holiday.

Which? is recommending that the government raise the minimum pension contribution from 8% to at least 12%. This could boost pension savings by £50,000.

However, for lower-income earners, Which? believes the auto-enrolment rate should be kept at 8% to avoid financial hardship.

The table below shows how auto-enrolment rates have changed since 2012.

Can I just rely on my state pension for retirement?

In order to qualify for the state pension, you have to make National Insurance contributions.

If you hit state pension age after April 2016, you’ll receive the new single-tier state pension and will need at least 35 years’ worth of contributions to get the full amount.

We’ve rounded up the state pension amounts you’ll be entitled to for this year and next year below:

While it can boost your income, your state pension alone may not be enough to provide the lifestyle you’ll want.

As such, it’s important start your retirement planning as early as possible to give yourself enough time to save up what you’ll need in the future.

HMRC pays back £627m in overpaid pension tax: are you owed a refund?

UK enters recession: what it means for your money