Five new 50p coins based on popular pantomime stories have been released in time for Christmas.

The designs feature Aladdin, Cinderella, Jack and the Beanstalk, Dick Whittington, and Snow White and the Seven Dwarfs.

The coins will go into circulation, but only on the Channel Island of Guernsey, so you’re unlikely to get them in your change on UK shores.

Despite this, they could still become collectors’ items.

Here, we look at how much these coins could be worth, and which other festive 50ps you should look out for.

Each new coin displays the name of a traditional pantomime story along with illustrations of characters or props from that play.

The Cinderella coin, for example, depicts a slipper, a pumpkin, and a magic wand; while the Dick Whittington coin stars Dick himself (and his cat).

See the designs in ‘brilliant uncirculated’ and full-colour silver proof versions below. 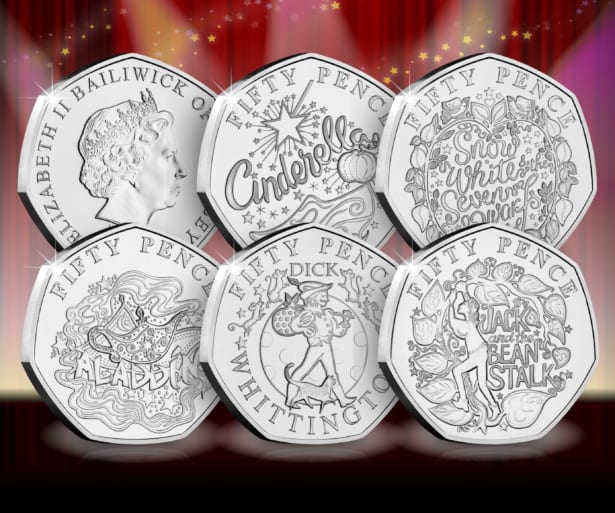 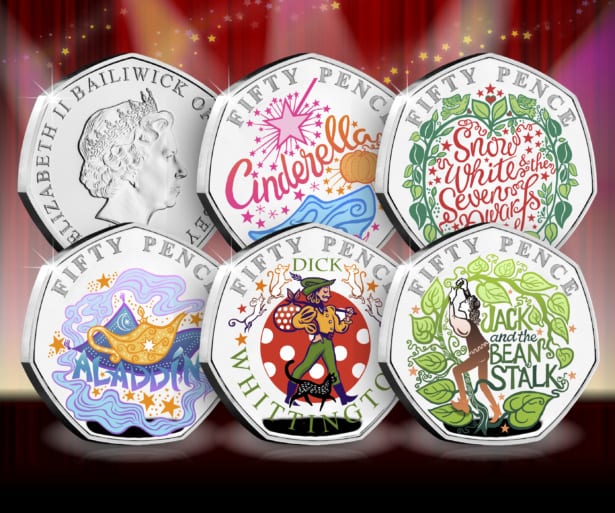 Where can I find the panto 50ps?

While the coins will enter circulation, they will only be appearing on the island of Guernsey. The Royal Mint, which handles all UK circulating coins, will not be producing them. But they have been authorised for release by the Guernsey Treasury.

Though you can spend UK coins on the Channel Islands, it doesn’t work both ways; Guernsey coinage is not legal tender in the UK.

Channel Island coins could still find their way into UK tills though, due to their similar appearance and people frequently travelling to and from the mainland, but the chances of you finding one in Great Britain are still very slim.

If you don’t want to make the trip to Guernsey, the coins are also available to buy online.

You can buy all five coins in uncirculated quality for £30 from the Westminster Collection website. The colourful silver proof editions can be bought as a collection for £325.

According to the Westminster Collection, more than 50% of the limited edition silver proof sets have already been sold.

How much are festive 50ps worth?

Though these coins are Guernsey’s first festive 50ps, other Christmas coins have proven popular with collectors.

The Isle of Man has had several Christmas 50ps enter circulation, many with the word Christmas emblazoned across them.

The 1984 Christmas Sutherland Train 50p, for example, tends to sell for around £20 on eBay at the moment. The 1989 Steam Ferry Christmas coin can sell for a similar price.

But likely the most valuable is the 2003 Isle of Man 50p featuring the Snowman. It has sold for more than £200 on eBay recently.

The Isle of Man has a similar currency arrangement to Guernsey, in that its currency cannot be spent here but UK currency can be spent there.

Commemorative coins from the Isle of Man and the Channel Islands are usually produced in very small numbers, making them rarer and potentially more valuable.

Other ‘rare’ 50ps from the UK have mintages of several million per coin.

The new pantomime coins could end up even more rarer than the 2003 Snowman coin. At the moment, only 4,000 of each design is scheduled to enter circulation this year.

But it’s important to remember a rare coin is not necessarily a valuable one.

Should you invest in rare coins?

An investigation for The Which? Money Podcast found that buying rare coins expecting they will grow in value is not necessarily advisable.

We spoke to experts including members of the London Numismatic Club, an organisation of coin enthusiasts, and professional treasure evaluator David Guest. Asked if people should expect to make money from coin collecting, the answer across the board was no.

Of course, no one is advising against collecting coins, but the consensus is you shouldn’t buy them specifically to make money.

Listen to the episode below to hear the full story, and subscribe to The Which? Money Podcast on Apple Podcasts, Google Podcasts or Spotify for weekly money insights.