A snapshot Which? investigation has found Google shopping ads promoting retailers that ignore UK rules for returns and refunds.

As Black Friday sales continue to grow, we found four retailers, which commonly appeared through Google Shopping adverts, with refunds and returns policies that weren’t compliant with UK consumer law for online shopping.

The adverts targeted shoppers searching for popular tech products like the Samsung Galaxy Note 10, Google Pixel 3a, Dyson V11 and Apple iPad. Combined, they attract well over a million visits from UK consumers each month.

In response to Which? stepping in, two of the four retailers – Toby Deals and WOWCamera – have now committed to clean up their act and have updated their website information to adhere to UK consumer law.

The two other retailers, eGlobal Central UK and TechInTheBasket, have not responded to our request for comment.

But questions still remain over whether Google is doing enough to protect consumers searching for their next big purchase.

A hidden cost to pay for faults and returns

eGlobal Central UK, Toby Deals, TechInTheBasket and WOWCamera are all large electronics retailers that are popular with UK customers, regularly appearing on Google Shopping lists for devices like smartphones, laptops and tablets.

Prices often undercut popular high street brands and even sites like Amazon. But is there a hidden cost to pay? Our research found a series of issues that contravene UK consumer law.

At the time of our investigation the retailers returns and refunds policies stated the following. 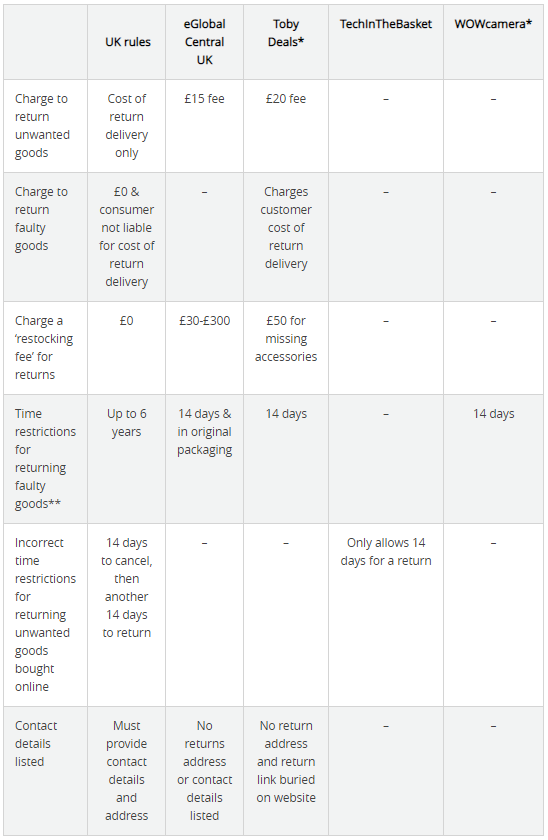 *In response to this investigation both Toby Deals and WOWCamera have agreed to make changes and ensure future compliance with UK consumer law.
** UK consumer regulations state that you have 30 days from taking receipt of a faulty product to return it for a full refund. After this period, the right to get it repaired or replaced lasts for up to six years.

Which? also found dozens of negative online reviews of the retailers, plus a series of customer complaints.

With eGlobal Central UK, these largely centred around slow delivery times, including items failing to arrive despite being charged for, bad customer service and poor communication.

Similarly, Toby Deals customers reported paying for products that were never delivered, plus there was criticism of the charges and costs involved in the returns process. Poor communication reportedly made resolving issues extremely difficult.

It’s quick and easy to research a company online before you buy, and reviews from real customers can be invaluable in helping you decide whether to trust these companies with your money.

eGlobal Central UK and TechInTheBasket have not made any changes to their returns or refunds procedures in response to our investigation.

Who are these retailers?

Don’t always assume you’re dealing with a UK retailer, even if it has ‘UK’ in the title, has a UK phone number or deals in pounds sterling. eGlobal Central UK and Toby Deals are actually based in Hong Kong, and WOWCamera claims to be governed by Hong Kong law.

The way these sites appear to customers in the UK helps to determine which rules and regulations they must abide by.

If an online retailer is ‘marketed to the UK’, English law applies to consumer rights issues with product deliveries and returns.

In these situations, your UK consumer rights should apply. But enforcing these rights with these types of retailers can be easier said than done.

We found UK phone numbers on just two of the websites – Toby Deals and WOWCamera – and both went straight to a voicemail service. A Hong Kong number was listed for eGlobal Central UK, and no number was found at all for TechInTheBasket.

Each of the companies listed an email address, which we used to report our findings.

We also contacted Google to do the same, and find out more about how companies are listed on its shopping network. 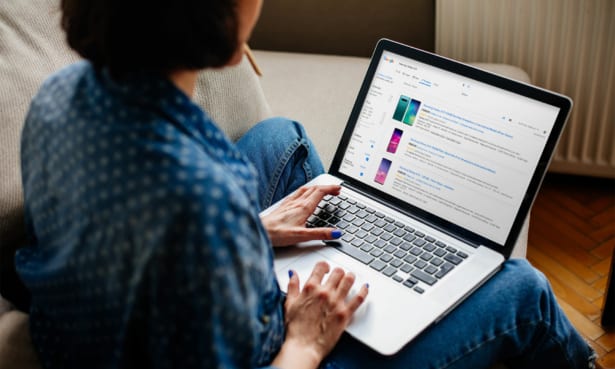 The problem with Google Shopping ads

In recent years, Google Shopping adverts have become an essential advertising channel for online retailers and are featured across Google’s Search and Shopping results.

Globally, in the last three months of 2018, Google made more than $36bn from its online advertising – including Google Shopping. With paid-for adverts regularly featuring products at the top of Google’s search engine results page, sometimes even before ‘organic’ non-paid-for listings.

Which? Consumer Rights expert Adam French said: ‘Our research shows how dodgy retailers can exploit a lack of oversight of ads on Google’s shopping platform – putting consumers at risk of being ripped off.

‘It seems wrong that firms that breach consumer laws can pay Google to secure prominent slots at the top of shopping search results.

‘This is a significant gap in consumer enforcement, which reinforces why the next government must carry out a major overhaul of the system to reflect how people buy goods and services today.’

A Google spokesperson said: ‘Because we want the Shopping Ads you see on Google to be useful, relevant, and safe, we have robust policies describing what we do and don’t allow on our ads platform.

‘In addition, we require the merchants who use our platforms to adhere to local law. As such, we have disapproved and removed their Shopping Ads in the UK.’

Which? has shared its findings with the Competition and Markets Authority, to be considered in the regulator’s wide-ranging investigation into digital advertising.

Help and advice when shopping online

Which? has plenty of consumer rights advice to make sure you’re clued up when you make a purchase, and are aware of your rights if you have issues, or need to return an item: