We’ve been testing and reviewing steam irons for many years, and we’ve just discovered a new top-scorer at a bargain price.

It performed brilliantly in our thorough lab tests, coming out with an excellent overall Which? score of 83%.

Out of the 131 steam irons we’ve tested that are currently available to buy, the average score is just 63% and the lowest score is 27%.  So this iron truly is miles ahead of the competition.

It was even better than most steam generators – which are larger, more expensive irons that have a separate water tank and tend to score higher. This proves you don’t need to spend a lot to get great results.

Take a look at our best irons to find the right model for you and your budget.

Here’s what impressed us about this steam iron: 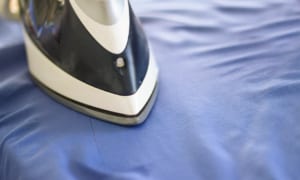 You’d think every iron would remove creases quickly and easily, but sadly this isn’t always the case. Many steam irons we test require you to push down hard to see any sort of results, and even then creases often reappear once you hang up your clothes.

This iron does a far better job than most, removing creases from a variety of fabrics in an impressively short time. You don’t have to press down and constantly use the steam boost either, so no need to spend hours toiling away at your ironing board.

Only the deepest, most stubborn creases began to reappear after we hung up our clothes, and even then they were barely noticeable.

You can use the filters in our steam iron reviews to see all of the irons that score at least four stars out of five in our tests for ironing performance. 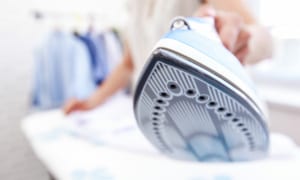 If you live in a hard water area, you’ll be only too aware of the problems that limescale build-up can cause in irons.

Over time, even if you use filtered water, limescale will build up in your iron’s water tank. This blocks the steam holes and makes it harder to remove creases.

With this iron, that won’t be a problem you need to worry about any more. Our tests showed that even if you ironed once a week for almost a year, it wouldn’t lose any steaminess whatsoever.

Even better, you can fill it straight from the kitchen tap – so no need to splash out on a water filter if you don’t already have one.

If you’d like to know more about how we measure irons’ limescale resistance, take a look at how we test steam irons. 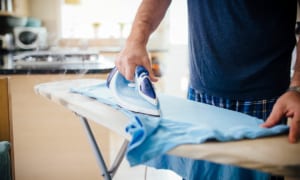 A sticky soleplate that snags on fabrics will only make the task of ironing more arduous, and it could even damage your clothes if you’re not careful.

Thankfully, our new top-scoring steam iron has a premium coated soleplate. This means it glides easily across all types of fabric with minimal effort.

It’s also very difficult to scratch, so even if you often find yourself ironing over zips or buttons, there’s no need to worry about damaging your iron beyond repair. 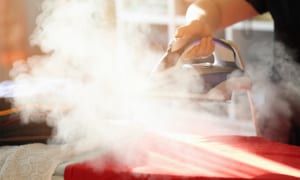 Another reason this steam iron scored so highly is its incredibly effective self-cleaning program.

Most irons offer some sort of self-cleaning or self-descaling feature, but our tests have discovered that many of these don’t make much difference at all, and the worst ones are totally ineffective.

This iron has a removable calc container that collects the broken-down limescale particles to prevent them from building up in the water tank.

You’ll need to clean this out every three months or so for the best results, but all you have to do is give it a quick rinse under the tap and you’re good to go.

Take a look at our guide on how to clean your iron to keep your iron in tip-top condition, no matter how often you use it.

As with most steam irons we test, this one isn’t without its flaws. They are, however, so minor that you shouldn’t let them put you off buying this model. 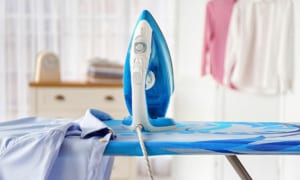 You can wrap the power cord around the base of this iron so it’s easy to pop in your cupboard, but a minor downside is that it lacks a clip to hold it in place.

This doesn’t mean it takes up any more space, but just be mindful of the plug if you’re storing it on a high shelf. 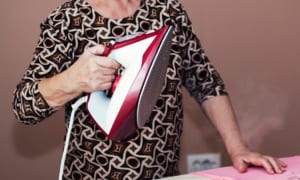 As is the case with most irons, this model’s handle isn’t the most comfortable thing to hold. If you use the steam function too often, it can also get pretty slippery.

The buttons aren’t ideally placed either, as they’re directly under the handle, but there aren’t really many other places they could go.

Want an easy life? When it comes to ironing, we can help – take a look at our best easy-to-use steam irons.