Samsung eulogised in typical fashion about the new core additions to its S20 range at this year’s unpacked event, but it was the product that opened the show that caused the most excitement – the reveal of the Galaxy Z Flip.

Hot on the heels of Motorola announcing a smartphone edition of the classic Razr simple phone, which originally launched in 2004, Samsung seeks to take its place in the spotlight with a version of its own.

The question you might be asking now is, which of the two ultra-premium foldables is the better choice?

At face value they look very similar, but a quick look at their specs shows that, on paper at least, there’s only one winner. Below, we look at how Samsung’s Galaxy Z Flip could take the crown as the most desirable foldable flip phone.

If you’re not sure what to look for when buying a new smartphone, we’ve got you covered in our guide on how to buy the best mobile phone. 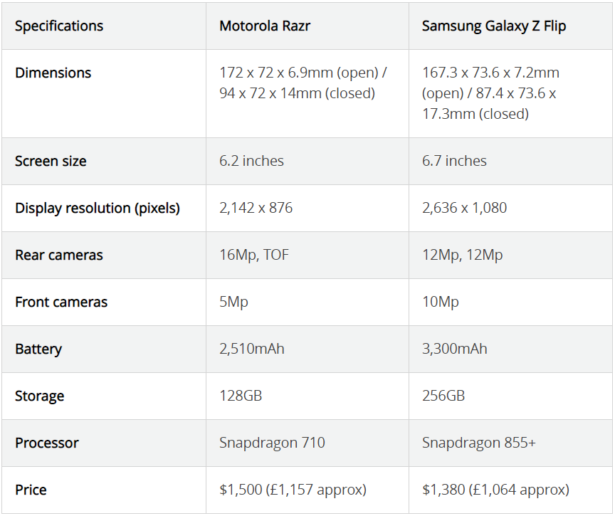 Glance over the specifications for each of the phones and you might think it’s a bit of a mixed bag. But the devil is in the detail – here are five reasons why we think Samsung trumped Motorola to end up with what could be the most popular handset. 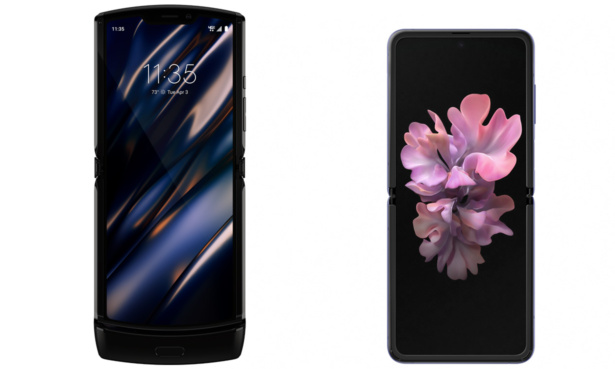 Starting with the Razr’s full display, you’ll get a 6.2-inch HD pOLED screen (2,142 x 876 pixels) – pOLED essentially meaning plastic OLED. On the other hand, known for its huge-display smartphones, the Samsung Galaxy Z Flip sports a 6.7-inch Full HD+ Dynamic AMOLED display (2,636 x 1,080 pixels), which as well as being bigger than the Razr also has a higher resolution.

With the Z Flip, you’ll also get a display that’s HDR10+ certified, a technology that’s designed to deliver better detail and colour on TVs, and increasingly on mobiles as well.

Perhaps the clincher, though, is what the displays are made of. Achieving a bendable glass display with the the Z Flip is some accomplishment in an of itself, but it’s also likely that the plastic alternative on the Razr won’t be as durable.

We couldn’t talk about these smartphones without mentioning their price.

If you’ve seen any of Motorola or Samsung’s launches in the past few years, you’ll find it extremely hard to believe that any high-profile Samsung smartphone will be the cheaper option. But the Z Flip manages to undercut the Razr. 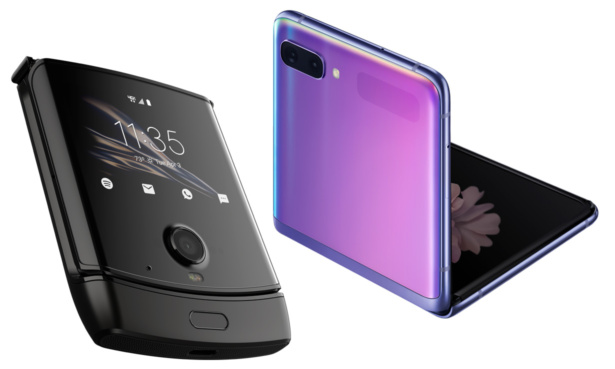 If you’re spending this much on a smartphone, you’ll want one that has the best possible camera specs and while it’s a close shave, the Razr loses out on this battle as well. It’s worth noting that neither phone has tried to get close to the uber-cameras on their flagship smartphones – a quad camera may be too much to ask for from a folding smartphone at this stage.

Starting with the Razr, it’s front lens is a very modest 5Mp, while its two rear-facing cameras are a 16Mp main lens and Time-of-Flight (TOF) camera. The Z Flip’s 10Mp front camera underlines Samsung’s dedicated to selfies and its dual 12Mp rear camera with an ultra-wide and wide-angle lens gives you a good bit of flexibility for capturing the scene.

That said, for those that prefer to take pictures in portrait mode, the Razr might be a better choice due to its dedicated TOF lens.

4. There’s more under the hood

It’s widely acknowledged that a higher battery capacity doesn’t equal better battery life. However, it does serve as a good indication of performance. With a 3,300mAh battery in the Galaxy Z Flip, it’s fair to say that you’ll be in better stead than you will with the Motorola Razr, which has a maximum capacity of 2,510mAh, especially since Samsung will require less to power a smaller front screen.

As for storage, there’s no micro-SD card option on either, so you’re stuck with what’s provided. The Z Flip comes with a generous 256GB of internal memory, though, coupled with 6GB of Ram, while the Razr has half the internal storage and 2GB less Ram.

The Flip has a faster processor as well – a Qualcomm Snapdragon 855+, the same one found in the OnePlus 7T. by comparison, the Razr’s Snapdragon 710 is found in more affordable smartphones like the Realme 3 Pro.

Battery is always an important consideration when buying a smartphone, which is why we run six different battery tests on every mobile phone we send to our lab. To see which smartphones come out on top, head to our guide on mobile phones with the best battery life.

For many, software won’t be a dealbreaker, but it’s still worth knowing about if you plan on keeping a smartphone in the long term. As with all of Samsung’s Galaxy S20 smartphones, the Z Flip comes straight out of the box running on Android 10, the latest operating system from Google.

The Razr packs Android 9. While we’d expect an upgrade, only time will tell. 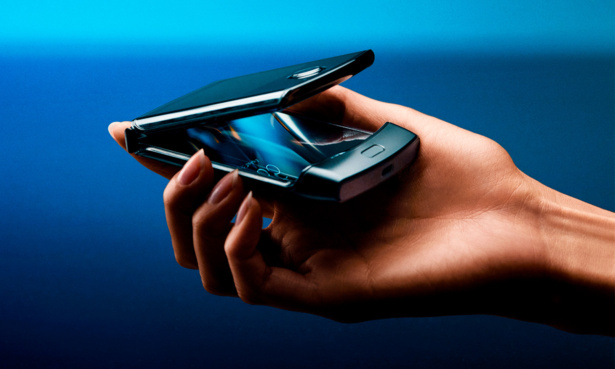 Are there any reasons to consider the Motorola Razr?

Of course. Part of the reason Motorola made such a splash with the Razr is down to a factor that can’t be underplayed – Nostalgia. You can’t quantify the love for an iconic design with numbers on a spec sheet.

There are some practical perks as well – the Razr’s front display is bigger at 2.7-inches compared with the Z Flip’s 1.1-inch screen, which will only be good for briefly reading notifications or answering calls. So if you’re buying a foldable phone that you can use for a few more practical purposes without opening it, that’s a notable selling point in favour of the Razr.

The final consideration is ‘feel’. Foldable phones are new on the market, so only time will tell how comfortable and usable they are day-to-day. There’s also a lot you can tell from your first experience with the phone – how it fits in the hand, and how easy it is to open and close. The Samsung Flip looks like a two-handed affair, since more effort is required to fold the phone flat – you might be able to flip the Razr all the way open with just your thumb, if that sort of thing is important to you. Ultimately, if you’re looking to spend this much on a smartphone, we’d strongly suggest you get hands on with it before you hand over the cash.

Find out what the new generation of flip phones is up against with our reviews of the best mobile phones.