Samsung unapologetically launched its extortionately priced Galaxy S10 5G and Note10 5G last year at £1,099 a piece. But if you were reluctant to pay the premium, the new ‘Lite’ devices might have caught your eye.

The Samsung Galaxy S10 Lite and Note10 Lite were unveiled earlier this year at the annual trade show CES, and aside from the S10 Lite launching a year after the other S10s, they made headlines for their price – they launched at half the price of the most expensive models in their respective ranges.

No doubt Samsung is taking the same approach that Apple did with the iPhone SE – creating a trimmed-down version of a flagship phone to capture the market of people who aren’t willing to spend much more than £500 on a new smartphone.

As foolproof as it may sound, these models launched a month before the Samsung Galaxy S20s did, which brought some sizable discounts to the S10 series as it became ‘old news’.

Should you just spend a bit extra on all the bells and whistles with the S10s and Note10s? We’ve compared the new Lite smartphones with their flagship equivalents to give you an answer. We’ll also tell you the best place to buy these phones to get the best deals. All contract deals were found on mobiles.co.uk.

Browse our top-rated mobile phones in our shortlist of the top five smartphones for 2020.

Key differences between the S10 and S10 Lite 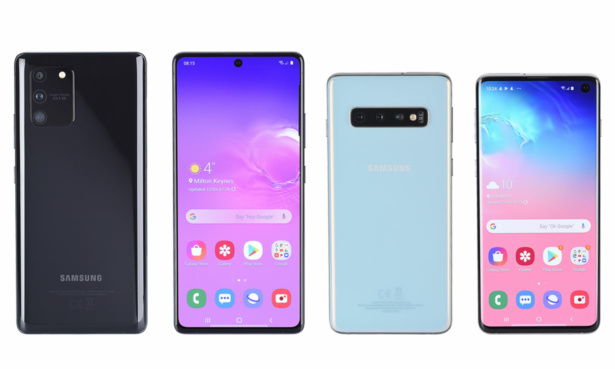 There are some noticeable differences between the two phones, starting with the S10 Lite’s much bigger display that matches the size of the much higher-spec Samsung Galaxy S10 5G. Big-screen lovers might think that opting for the S10 Lite is a no-brainer, but Samsung had to cut corners somewhere on this phone and that’s in its display resolution.

Although both phones are HDR10+ capable (High Dynamic Range) – the technology that’s designed to deliver better detail and colour on your screen – the S10 Lite’s phablet-sized display is only Full HD+ resolution, while you’ll get Quad HD+ on the standard S10.

On to the more surprising difference between the two, which is the S10 Lite’s camera array. Considering that the S10 Lite is even cheaper than the S10e that originally played the role of the ‘affordable Galaxy S series smartphone’, it’s very surprising that it has such an impressive lens line-up. Going lens-for-lens, the S10 Lite has a 12Mp ultra-wide-angle lens compared with the S10’s 16Mp one and a whopping 48Mp wide-angle lens to the S10’s more modest 12Mp one.

To complete the trio, Samsung opted for a 5Mp macro lens for taking better close-up photos, while you’ll find a 12Mp telephoto lens (ideal for taking pictures at a distance) on the S10. Depending on which type of photography you prefer, these opposing lenses may be your deciding vote.

Elsewhere on the S10 Lite, you’ll find a high-resolution 32Mp front lens, but it doesn’t have the Dual Pixel autofocus that the S10 does, which increases the speed of focus. There’s also a bigger battery in the S10 Lite, but it misses out on wireless charging and reverse charging that lets you turn your phone into a power bank to charge other devices.

Best deals on the Galaxy S10 and S10 Lite

It’s safe to say that neither of these phones can be considered ‘cheap’, but compared with the super-premium prices we’ve seen from Samsung of late, these two are a steal right now. Here are some of the best contract and Sim-free deals if you want to buy them:

If you want to buy a Sim-free phone, the S10 Lite is currently £80 cheaper than its launch price and it’s £100 less than the S10 on contract. Based on savings and specs alone, the Lite is the more attractive choice of the two, but be sure to consult our Samsung Galaxy S10 and Galaxy S10 Lite reviews to see how they did in our tests before you make your final choice.

Key differences between the Note10 and Note10 Lite 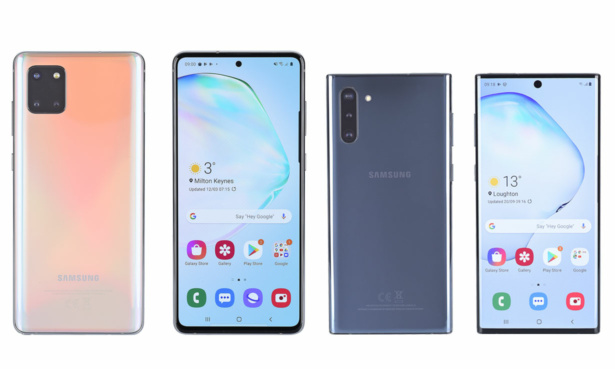 Unlike the battle between the S10 Lite and S10, it’s a much closer call with the Note10 series.

Looking at their displays, there’s not much in it, but the Note10 wins by a whisker. It gives you an extra 0.4-inches of display for your money and although its display has a slightly lower resolution, it’s not by much. The only other sacrifice you have to make is with HDR, as the Note10 Lite doesn’t have HDR10+ like the flagship Note10.

In terms of their cameras, these two Samsung smartphones are almost neck-and-neck. Both have a 12Mp wide-angle and 12Mp telephoto lens, but the biggest differences comes in their ultra-wide-angle lenses. The Note10 benefits from Super Steady Video a feature that’s works as an internal stabiliser to reduce blur when you’re capturing action-packed videos.

Like the S10 Lite – although the Note10 Lite has a higher-resolution 32Mp front lens compared with its flagship range mate – it misses out on the Dual Pixel autofocus.

If you’re someone who needs a lot of storage for pictures, you might be tempted by the Note10 as it comes with 256GB as standard. The only quirk is that it can’t be expanded with a micro-SD card, so you’ll have to be happy with either 256GB or the other configuration of 512GB when you buy it. The Note10 Lite has less internal storage (128GB), but gives you the option of expanding it’s capacity by up to 1TB with a micro-SD card.

Again, like the S10 Lite, the Note10 Lite’s battery packs a bigger punch as far as its capacity, offering an extra 1,000mAh compared with the Note10. But bear in mind that you’re not getting wireless or reverse charging.

Best deals on the Galaxy Note10 and Note10 Lite

Choosing between these two Note smartphones is tough, but if you’re not fussed about having features such as wireless charging or autofocus on your front camera, then the Note10 Lite is wins going by price. However, the Note10 is currently discounted by £220 from its original launch price (£899), so if you want all the bells and whistles, now’s a good time to take the plunge. Take a look at our Samsung Galaxy Note10 and Galaxy Note10 Lite reviews before you make your final decision.

*This deal was found on fonehouse.co.uk.