If you’re heading to Lidl to do your essential shop next week, the cheap Silvercrest ice cream maker may catch your eye.

This nifty little gadget allows you to make fresh ice cream from the comfort of your kitchen, without the faff of having to constantly stir it yourself for perfectly churned results.

And at just £18, it’s one of the cheapest ice cream makers around.

We’ve spotted fewer Lidl offers on gadgets such as this recently, as the budget supermarket focuses on stocking essential goods instead, but this ice cream machine will be available in stores from Sunday 26 April while stocks last.

If you’re craving iced treats to match the sunny weather, it could be the perfect Lidl luxury to add to your essentials shop. But is it a worthwhile buy? We’ve taken a look at how it measures up to rivals to help you decide.

Small kitchen appliance reviews – get our verdict on the best kitchen gadgets, from air fryers and blenders to bread makers and stand mixers

Lidl Silvercrest ice cream maker: is it a good deal? 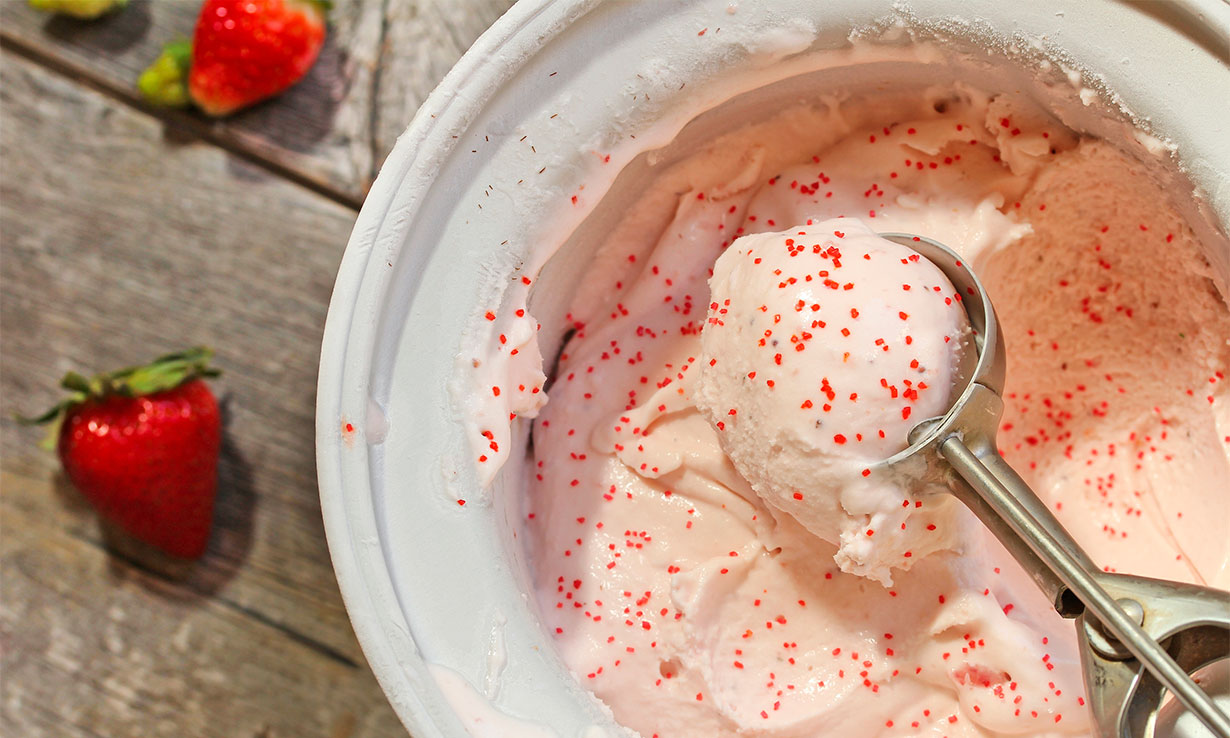 Looking at what you get for your money versus rivals, the Lidl ice cream maker seems like pretty good value.

£18 is about as cheap as it gets for an ice cream maker, but this one still has a decent capacity – letting you make around one litre of ice cream in one go. By comparison, Lakeland’s Mini Ice Cream Maker, which costs £20, can make just 0.5 litres.

The practical opening in the lid means you can add ingredients while it’s churning – handy if you want to add some berries or other extras towards the end.

Like other ice cream makers at this price, it has a bowl which you need to pre-freeze in advance of making your ice cream, so you’ll need to make sure you have enough space to fit it in your freezer.

In the case of this Lidl model, you’ll need to pop the bowl in the freezer 24 hours before you want to use it, which is a little longer than others we’ve seen – some require just 8-12 hours instead.

It’s also a little slower to work, based on spec, taking around 40 minutes to churn ice cream, whereas some rival options claim to take around 20-30 minutes.

More expensive types of ice cream maker don’t require pre-freezing, instead freezing your ice cream as they churn, but these usually cost several hundred pounds. They will also take up a lot more space on your kitchen counter.

Should you buy the Lidl Silvercrest ice cream maker?

If you’re looking for a cheap way to keep yourself busy in the kitchen while you’re spending more time at home, the Lidl Silvercrest ice cream maker looks to be worth a try.

When we’ve tested ice cream makers in the past, we’ve found some Best Buy options for around £20, so a low price doesn’t necessarily mean it won’t do the job well.

However, it does seem a little slow compared with some, so it might be worth spending more if you’re keen on quicker results.

Other ice cream makers to consider

We’ve rounded up some other popular options, so you can see how they compare on spec: 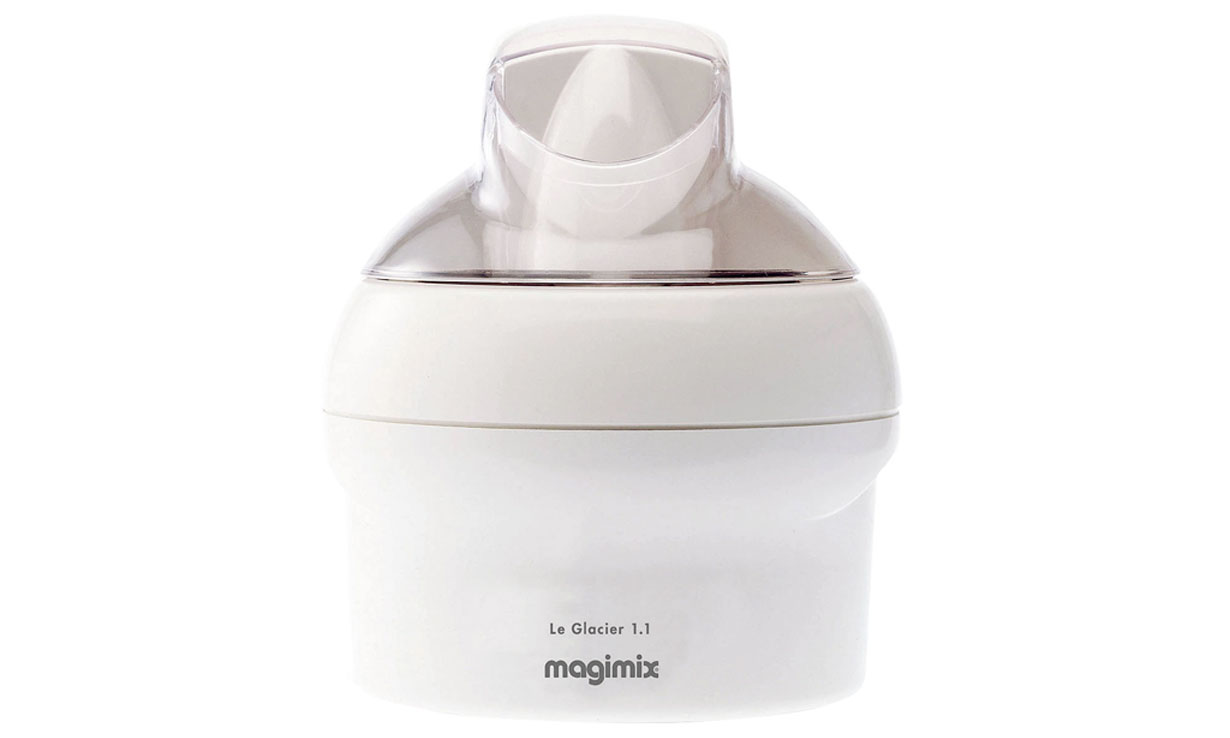 This £40 Magimix Le Glacier 1.1 ice cream maker is pretty similar in look and size to the Lidl version. It’s main advantage is speed – it says you only need to pre-freeze the bowl for 8-12 hours and that ice cream should be ready in 20-30 minutes.

There’s also a Magimix app that gives you access to more recipes to help you get the most out of your gadget.

The Lakeland Digital ice cream maker (£40) is also very similar, but has a small digital control screen. Lakeland says it includes seven recipes to get you started. 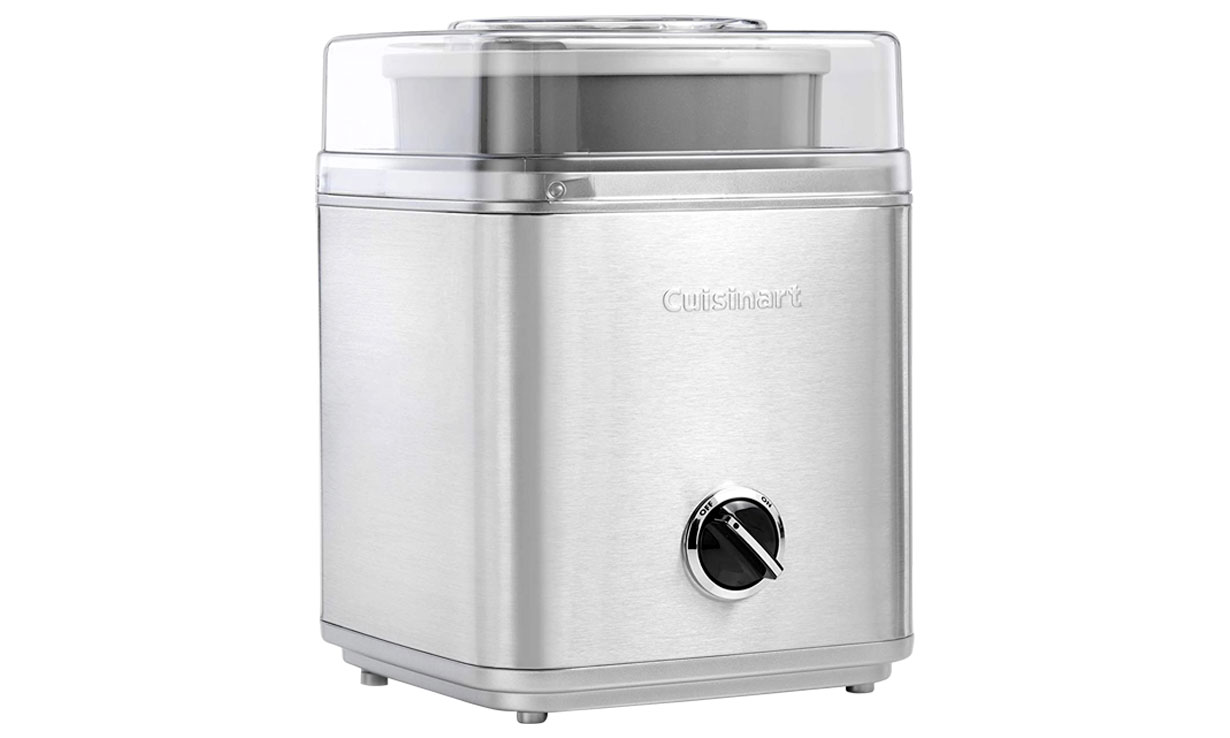 This Ice Cream Deluxe ice cream maker from Cuisinart is more than four times the price of the Lidl version, but it does have a more polished look about it, thanks to the smart brushed steel exterior.

The Cuisinart ICE30BCU ice cream maker also has a larger capacity, allowing you to make up to two litres of ice cream at a time – handy if you want to feed a larger household. It claims to be speedy, too, saying ice cream will be ready in 20-25 minutes.

The open-lid design allows you to easily add ingredients while it’s in motion, and the freezer bowl, mixing paddle and lid are all detachable to make them easier to clean. The detachable bowl should be easier to squeeze into your freezer, too.

You get 13 recipes included, as well as a generous five-year guarantee. 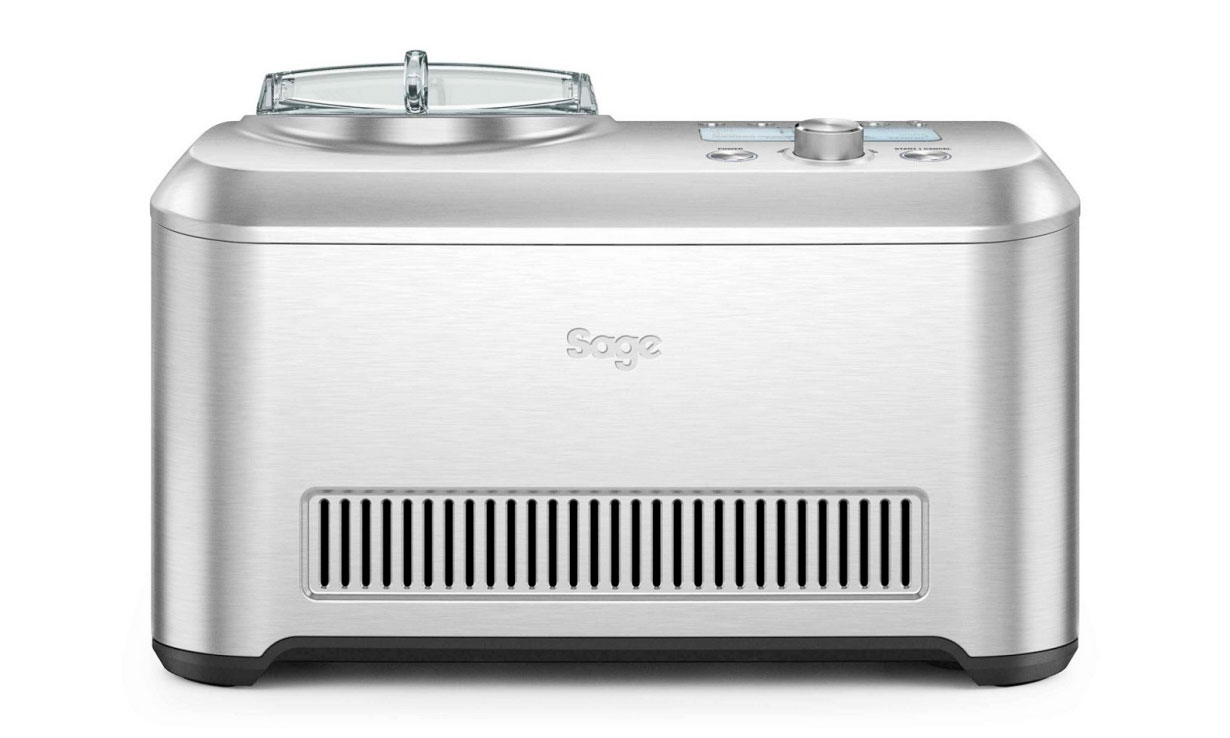 The Sage The Smart Scoop is a high-end ice cream maker that comes with 12 hardness settings to help you make ice cream, gelato, sorbet and frozen yogurt. There’s no need to pre-freeze the bowl before using it and you can make one litre of ice cream per batch.

It automatically senses the hardness of your ice cream mixture based on what you’re trying to make and keeps it cool for up to three hours – until you’re ready to serve. You can even set it to play the tune of an ice cream van to let you know when it’s ready!

As you don’t need to pre-freeze the bowl, you can make an icy treat whenever you fancy and you can churn out multiple batches in a row if desired.

It’s about as pricey as it gets, though. If you like the idea of ice-cream without the faff of pre-freezing the bowl, you can also check out the Cuisinart Professional Ice Cream Maker, £250.

This model doesn’t have quite as many bells and whistles as the Sage, but it does have two paddles (for gelato and ice cream), a larger 1.5-litre bowl and it works automatically too. 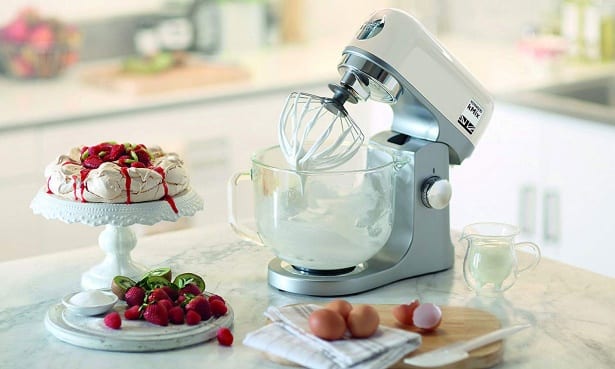 You might be able to make ice cream with an appliance you already own, saving on having to fit yet another gadget in the cupboard.

Ice cream maker attachments are available for some stand mixers, including KitchenAid (£90), Kenwood (£60) and Smeg (£100). These usually come in the form of freezable mixing bowls and paddle attachments.

If you own a blender or food processor, you can even make instant ice cream with frozen fruit, cream and ice cubes – as long as your model says it can handle ice.

Check our stand mixer reviews, blender reviews and food processor reviews if this sounds like a better option for you. 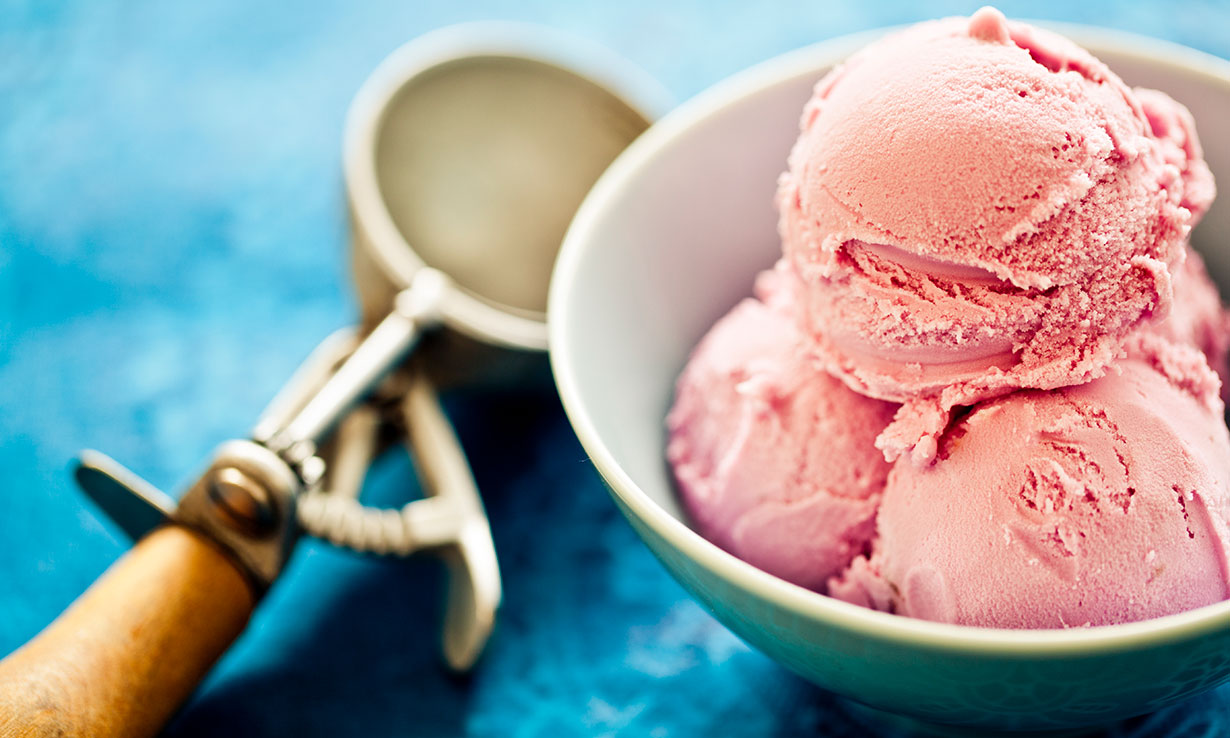 Using an ice cream maker for the first time can be a bit of a learning curve, so here are some tips to help you get the best results:

Common ice cream maker problems and how to solve them

If you think a dodgy freezer may be the reason your ice cream isn’t quite going right, check out our reviews of fridge freezers and freezers.