Microsoft has unveiled two new 2-in-1 tablet devices, the Surface Go 2 and the Surface Book 3. We take a look at the specifications and pricing of these new models to find out whether you should take the plunge with a Microsoft tablet-laptop device.

As the Microsoft Surface line enters its ninth year, the market for these laptop-tablet devices has started to mature. One of the main complaints one could have about Surface products was their high price. The Surface Pro has rarely been sold for under £700. In fact, they’re all usually sold for much higher prices. The Surface Laptop was £900 and the Surface Book was £1,200.

This changed in 2018, when Microsoft launched the Surface Go: a smaller and cheaper way into the world of Surface. The new model, called the Surface Go 2, builds on the original and addresses some issues that would have stopped some people from choosing one over another Windows tablet.

The Surface Go 2 is physically very similar to the original Surface Go. The tablet itself is the same size as the old model, but it’s managed to squeeze in a larger screen by making the bezel around it smaller. Thus, the screen has expanded from 10 inches to 10.5 inches. Aside from that, externally at least, the Surface Go 2 is the same as its predecessor. It’s compact and light (weighing 544g), and runs on Windows 10 S. 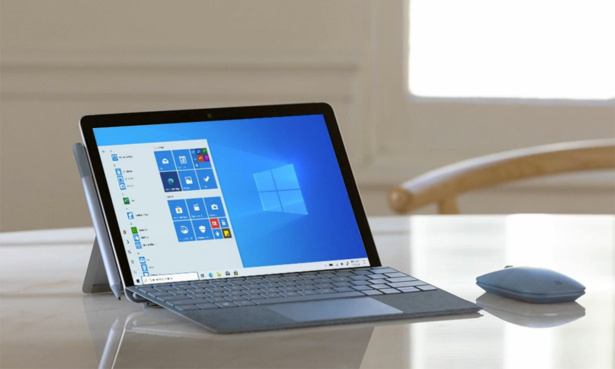 A key part of the attraction of the Surface Go line is the price. Microsoft has kept the base price the same for the lowest-specification model, which starts at £399. For that you get an Intel Pentium Gold processor, 4GB of Ram and a 64GB of ‘EMMC’ storage for multimedia content. This specification is fine for basic use, with one or two programs open and a few web browser tabs, but is likely to struggle if you want to multitask more heavily.

With that in mind, there is a new option that has an Intel Core M3 processor, 8GB of Ram and a faster 128GB solid-state drive (SSD). A bog-standard laptop with this specification would normally set you back around £450, but the Surface Go 2 with this specification costs £619, and that’s before you shell out £100 for the TypeCover keyboard, bringing the total cost to £719. Add another £100 if you want the Surface Pen stylus, too.

At this price it is a tough ask, especially given there are some fantastic laptops that cost under £700. But if the Surface Go is exactly what you need – a modestly quick tablet with the ability to be converted into a drawing tablet or laptop, then you’ll probably be about to click buy before you finish reading this sentence.

However, if you’re looking for a more conventional laptop at a similar price, take a look at our pick of the best cheap laptops and the best Windows laptops to choose from.

Surface Book 3 – a powerhouse for professionals

Most people shouldn’t even look at the Surface Book 3. It is wildly over-specified for anybody looking to get the basics done at home or university, but it’s pitched perfectly for those who need top-end specifications for complex tasks such as 3D computer-aided design (CAD), video editing, photo editing, coding or even gaming.

The cheapest Surface Book 3 will launch on 4 June with a starting price of £1,599 for the 13.5-inch model and £2,199 for a 15-inch version. This device comes with a proper keyboard with built-in batteries and ports, but you can detach the screen entirely and turn the device into a powerful tablet whenever you need. There are lots of specifications to choose from, including models with dedicated graphics (read our guide to graphics for more on this), more storage and more powerful processors.