Our latest round of TVs testing ran the gamut in terms of size and price, from the entry-level 43-inch UE43TU7000 all the way to the 65-inch QE65Q95T, costing eight times as much as its comparatively tiny cousin.

They are leagues apart in price, but what about quality? You’d expect the QLED TV to trounce the TU7000 in every area, but quality and price don’t always line up.

As well as the models that bookend Samsung’s 2020 line-up, we’ve tested a few from the middle, including its most high-end LCD range, the TU8500s and some Q60T models, which is Samsung’s cheapest QLED series.

Samsung TU7000: cheap and cheerful or cheap and nasty? 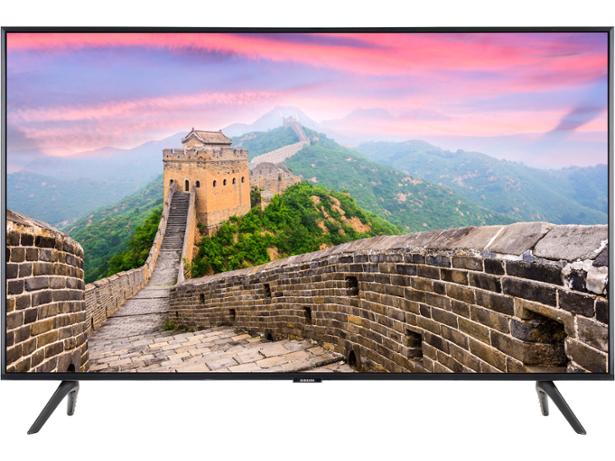 So why is the UE43TU7000 so cheap? Well it’s pretty basic. There’s no PVR, which means you can’t record shows on to a USB hard drive; there’s no satellite tuner, which means an aerial will be needed to watch Freeview channels; and there aren’t many HDMI or USB inputs. Normally we’d expect to see at least three HDMI ports and two USB ones, but the TU7000 only has two and one, respectively. Games consoles, Blu-ray players, TV streamers, sound bars, home cinema systems; suffice to say there’s no shortage of devices vying for those two slots, so it won’t be long before they’re occupied.

Losing these features isn’t great, but it could mean that in the quest to make its entry-level TVs cheaper, Samsung decided to cut features rather than quality. Plus, in other ways the TU7000 isn’t basic at all. Take HDR, for example – it uses HDR10+, an advanced format that adjusts contrast dynamically to suit each scene. Doesn’t that sound impressive? It is, when used well, since the basic formats (HDR10 and HLG) have static contrast adjustment that can often leave scenes looking overly bright or dark and obscuring detail.

It doesn’t have all the camouflage features of the TV we’re going to discuss below, but the the TU7000 has an understated design and a thin bezel that means it won’t be an eyesore in your living room. You can pass cables through the stand, too, so at least some will be hidden.

It’s picture detail that always impresses us with Samsung TVs. If we had to find a needle in a haystack from a picture on a TV screen, we’d display it on a Samsung. Does that enviable legacy stretch to this, its cheapest 4K TV? You can read our full review below to find out. 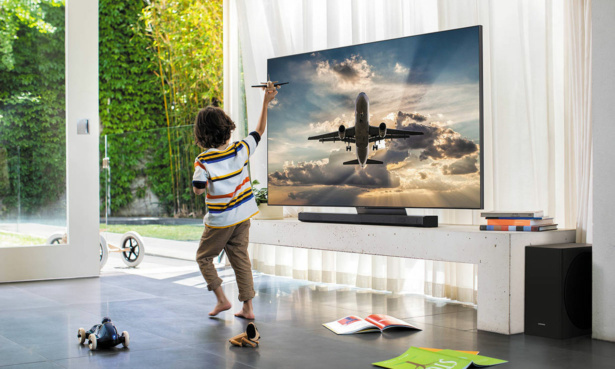 If ever a TV had it all, it’s the Q95T. It has more special features than the extended editions of The Lord of the Rings, and while some of these are window dressing, others are integral to the core functions of picture and sound.

A new way of positioning the speakers

Most TVs have down-firing speakers at the base of the screen, pushing sound out and towards the viewer, but not the Q95T. It puts some of its speakers behind the screen at different points to create what Samsung calls Object Tracking Sound. Imagine you’re waiting for a train and one goes by. The sound comes from the left, reaches its loudest point in front of you and then fades as it moves to the right.

The speaker array behind the Q95T’s screen should be able to mimic this sense of moving sound. But it won’t always be so obvious, sometimes it will be subtler changes, such as the sound of dialogue actually coming from the speaker’s mouth. This is all in the name of immersion.

We’re getting a bit sick of saying this, but there still isn’t that much 4K content to watch. So, while we wait for UK broadcasters to get their acts together and launch some 4K channels, upscaling lower resolution (by this we mean standard-definition and high-definition) content will still be vital for getting the most from a 4K TV. Samsung’s AI Quantum 4K Processor uses artificial intelligence to analyse the picture and sharpen everything like a medieval blacksmith in wartime.

Adaptive picture should mean less adjustment from you as the lighting conditions change in your room. The TV detects light levels with a tiny sensor and shifts the picture accordingly, so you’re always seeing it at its best. 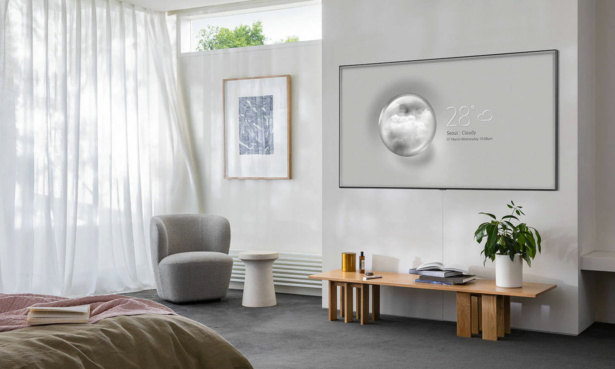 That’s what your friends and family will say when they admire your lounge, because the Q95T is a master of disguise. For starters, there’s only one cable attached to the TV itself and you can barely see it. The thin, almost transparent cable is connected to a Blu-ray player-sized box at the other end and that’s where all the HDMI and USB inputs live. This means you can tuck all those extra devices away out of sight.

But that’s not all: the Q95T, and all QLED TVs actually, can do wonderful things with its screen when you’re not watching TV. It can display works of art, personal photos and moving wallpapers. It can display actual wallpaper, assuming that’s what you have on your walls – the cleverest thing about Ambient Mode is its ability to copy the pattern on the wall behind it whether that’s wood, brick, paint or wallpaper.

There’s a lot more that this TV can do and these are just some of the more unusual things. You can read our reviews of both the 55 and 65-inch Q95T TVs to see if the picture can match the sound, and whether it’s straightforward to use.

The TU8500 range and the Q60T range are in danger of eating each other’s dinner. On the one hand you have Samsung’s most high-end LCD sets (that’s the 8500s) and on the other you have its cheapest QLEDs (the Q60Ts). Those QLEDs are pricier, but are they better? If the TU8500s have them beat then you save a few hundred quid by picking one of those up instead.