There is no doubt the events of the past few months have had considerable impact on the car industry. New car sales dropped off a cliff in April as showrooms were forced to close, and buyers have been left in limbo.

The situation is slowly easing, though. From the beginning of June, car showrooms have been allowed to reopen, and manufacturers are implementing social distancing measures, so you can browse and even test drive new cars (though check with your local dealer) without contravening current official guidelines.

Carmakers haven’t slackened the pace, either, and there’s a huge amount of exciting new metal making its way to the UK market. In particular, the ramp up in availability of Battery Electric (BEV) models shows no sign of abating.

Here are our highlights of the latest electric vehicles (EVs) available to order now and in the near future, ordered by expected release date (though not all dates have yet been confirmed).

Whether you’re in the market for an electric, petrol or hybrid car, find out which cars we recommend across a range of classes in our guide to the top cars for 2020. 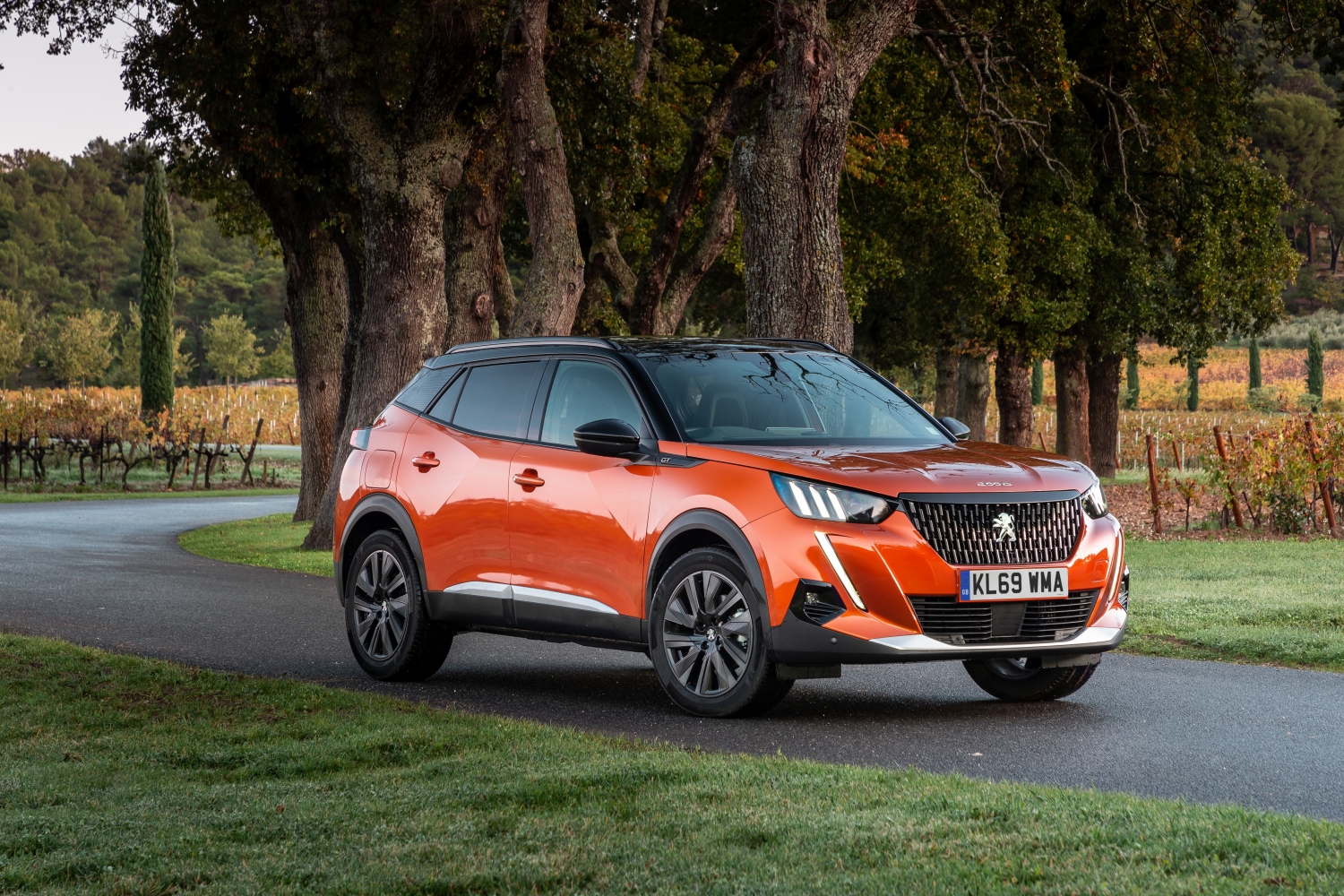 Peugeot’s compact SUV is the latest model to get the full BEV treatment, after the e-208 small hatchback. Like the petrol 2008, it’s front-wheel-drive, and power levels have been kept at similar levels, with the car’s single electric motor producing 136hp.

With a 50kWh battery pack, Peugeot claims a total driving range of 193 miles – slightly less than that claimed for the e-208 – on account of the 2008’s greater size and weight.

Like the new 208 hatchback, the 2008 benefits from a sharp new design which is worlds away from its rather frumpy predecessor. The interior has been similarly uplifted, with sharp styling, better quality materials and the introduction of Peugeot’s i-Cockpit digital driver display, which was previously only available on the brand’s larger models. 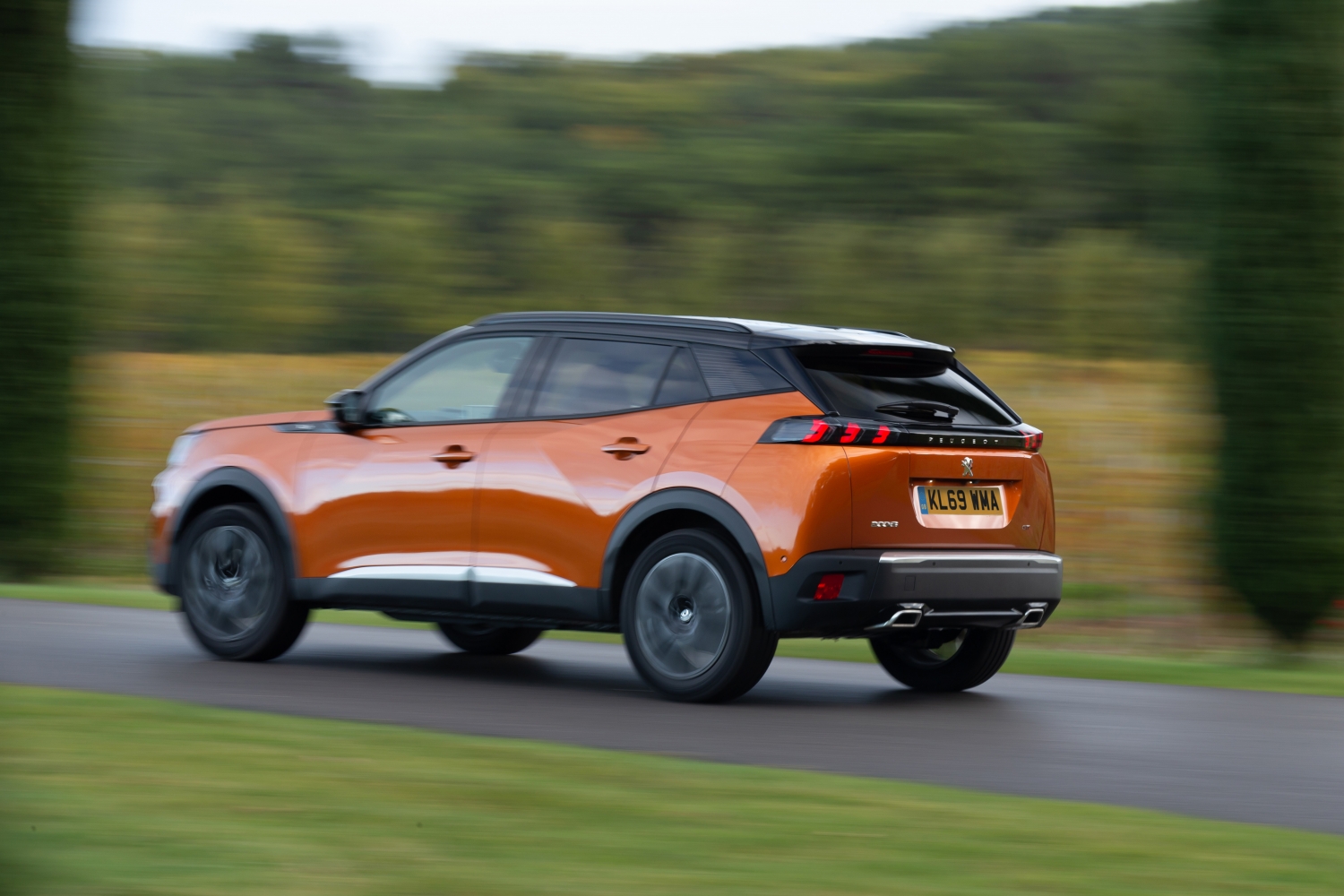 Apple CarPlay and Android are fitted as standard, as is wireless charging for compatible smartphones. Desirable active safety technology such as autonomous emergency braking and lane assist also feature.

The new e-2008 is available to buy now, priced from £28,665. We’ll be putting it through its paces in our test lab in the next few months, so watch this space.

For our pick of EVs that we’ve already put through our test lab, head to our guide on the best electric cars. 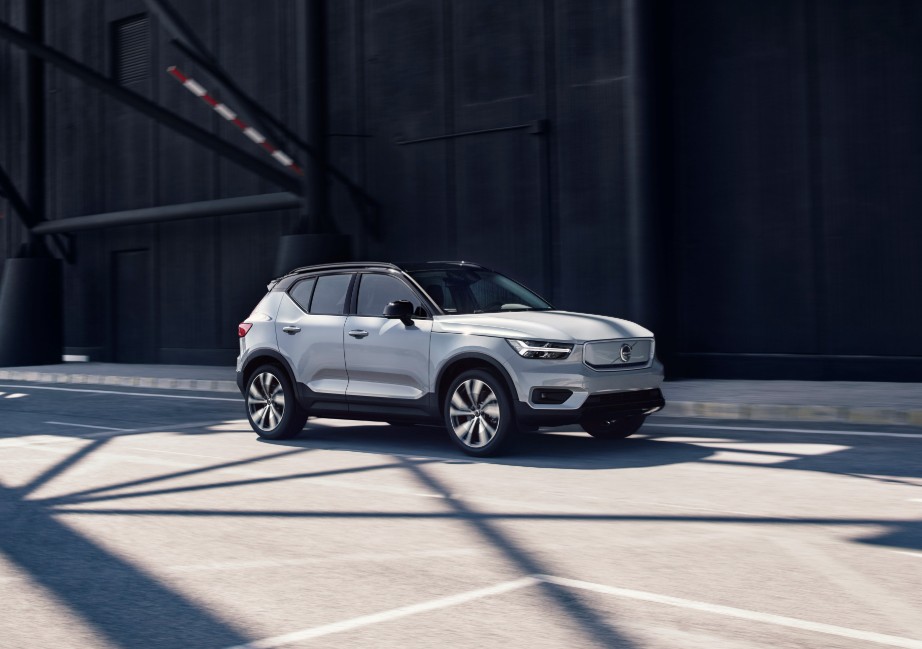 We’re big fans of the regular XC40 for its comfy, satisfying driving experience and excellent safety kit. Volvo’s choice to use it as the basis for its first ever electric car should see its already broad appeal widened further.

The first of five all-electric models to be introduced by the Swedish brand in the next five years, the XC40 Recharge Pure Electric P8 is available to order now from £53,155. First customer deliveries are expected early next year.

That high price point means this electric XC40 isn’t eligible for the plug-in car grant, since changes to the rules in the latest Budget (cars must cost less than £50,000 to be eligible). It’s also around double the entry price of the regular XC40 range.

However, unlike the combustion-powered XC40, the P8 model makes 408hp from its twin-electric motors, and is capable of getting to 62mph from a standstill in a very brisk 4.9 seconds. Claimed driving range is 249 miles and the battery can be charged to 80% in 40 minutes, provided you use a fast charger.

Other changes over the standard model are the addition of a 30 litre storage space under the bonnet – space liberated by the lack of an engine – and the latest iteration Volvo’s Pilot assist technology, which offers a small degree of autonomy when driving on motorways. 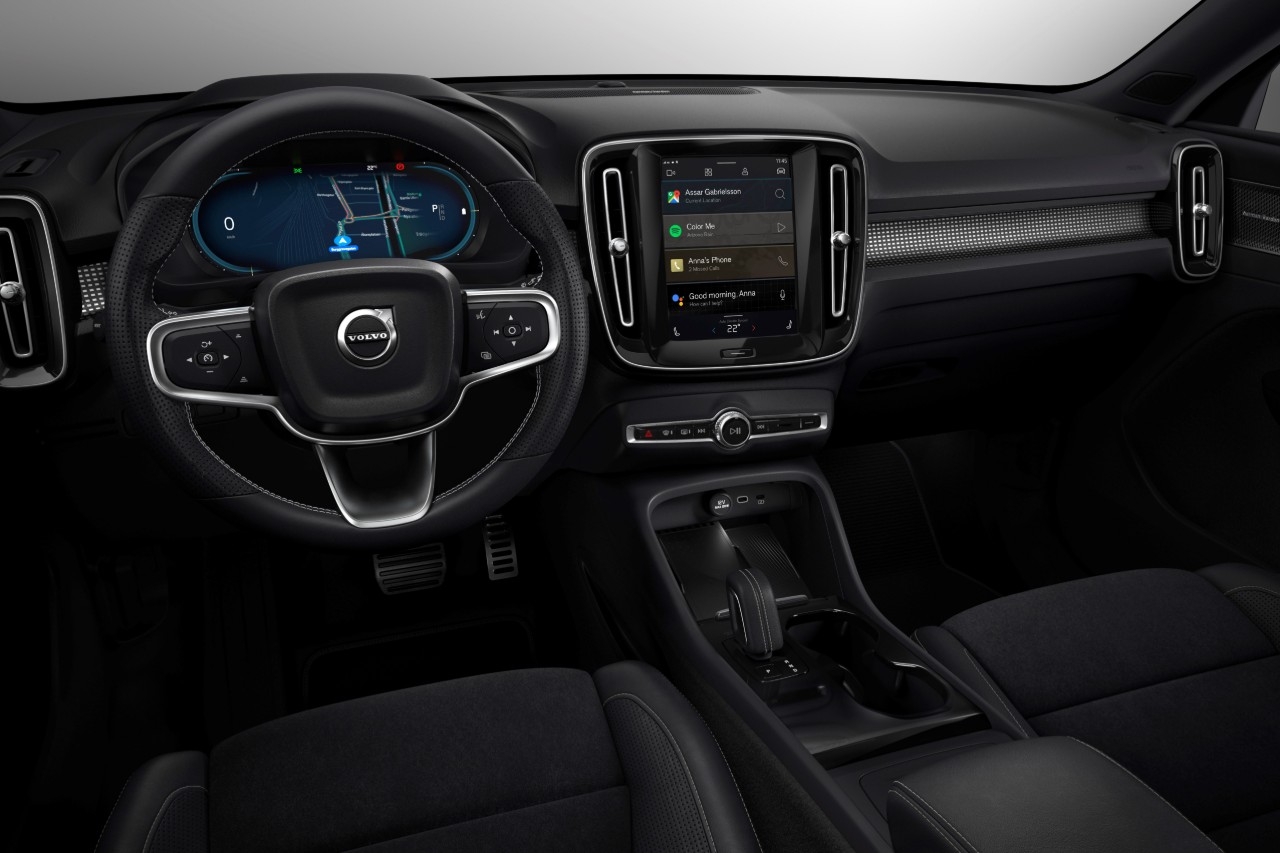 The P8 also showcases Volvo’s new Android based entertainment system. This includes integrated Google Maps and it can receive automatic wireless updates, ensuring your car is up to date for years to come.

If you like the idea of a zero-emissions small SUV, but would rather part with less cash, take a look at our full review of the Hyundai Kona Electric. 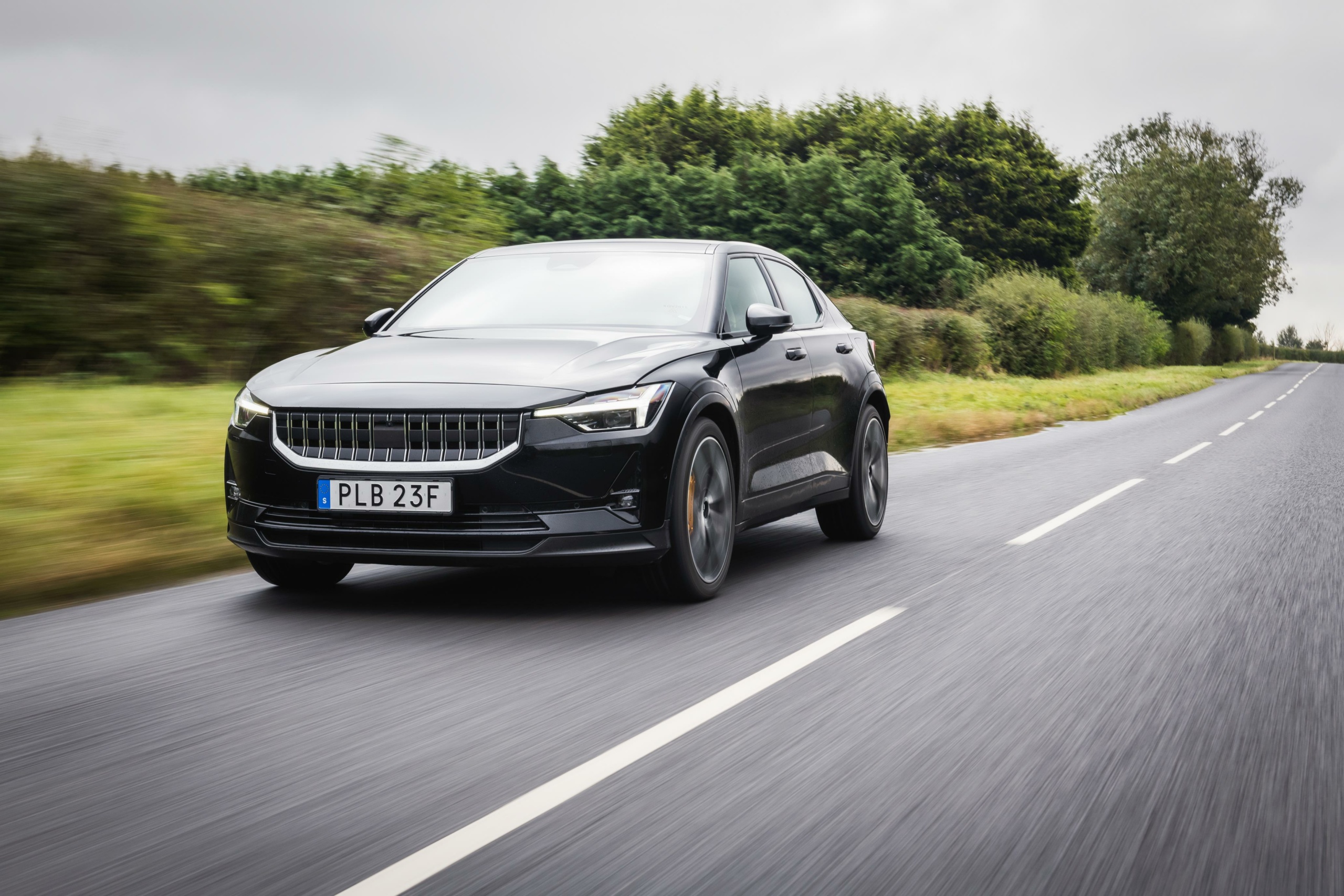 Plenty of carmakers are trying to steal a chunk of the Tesla Model 3’s market, and one of the latest is Polestar, the Volvo-owned electric car brand.

Following on from the strictly limited edition – and hugely expensive – Polestar 1 luxury saloon, the all-new Polestar 2 is a somewhat more accessible proposition, although prices in the UK still start at a chunky £49,900. That price does include three years of routine servicing and maintenance, though.

Producing 300kw (around 408hp) from its twin electric motors, the four-wheel-drive Polestar 2 uses a 78kw battery and has a claimed range of 292 miles – though we’ll put that to the test a soon as we can get this car into our lab.

This five-door ‘fastback’ model is already available to order, with all sales happening through Polestar’s website only. It’s well-kitted as standard, being fitted with Volvo’s ‘pilot-assist’ active safety and driver assistance technology, as well as luxuries such as a Harmon Kardon sound system and panoramic glass roof. 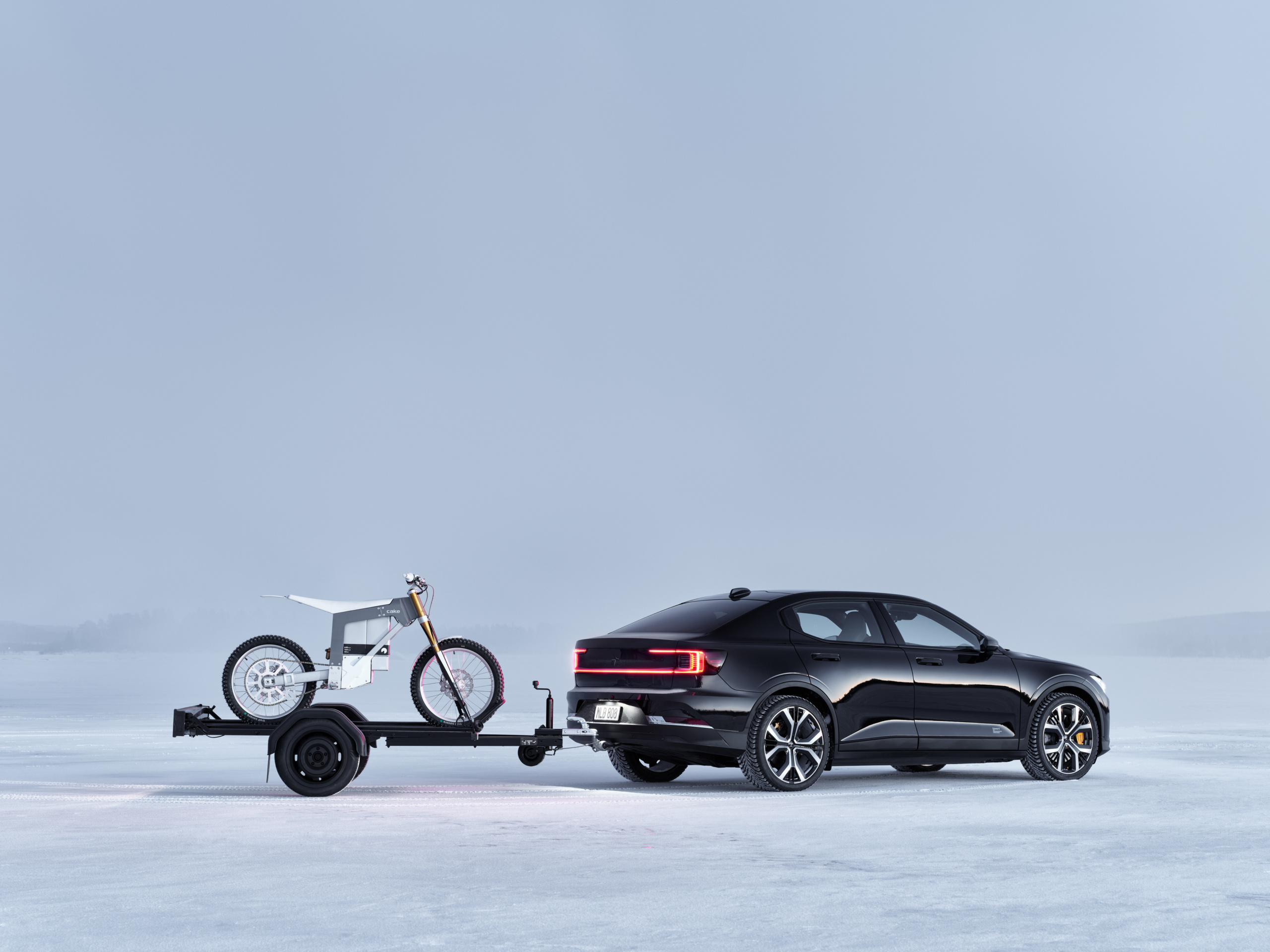 In fact, the only option pack available is a £5,000 performance pack, which adds sports suspension and brakes, as well as larger alloy wheels and some small styling elements inside and out.

An electric tow bar is a further £1,000 option and one that could prove useful, given the car’s 1,500kg maximum towing capacity – a relatively rare feature in an electric car; read our round up of the hybrid and electric cars that are capable of towing.

The first customer Polestar 2s are hitting the roads in the coming weeks. Order one now and you should receive it by September. If high-riding cars are more your thing, Polestar’s next model, the 3, will be an all-electric SUV.

Find out how the Polestar’s closest rival performs in our full Tesla Model 3 (2019-) review.

Citroën E-C4 (price to be confirmed)

Citroën’s forthcoming C4 family hatchback – which serves both as a replacement for the previous model, discontinued in 2018, as well as the quirky C4 Cactus crossover – isn’t due to arrive until at least the end of 2020, but could well be worth waiting for.

It will be available in petrol, diesel and BEV guises. The electric version, the E-C4 is due to be unveiled in full at the end of the month, though initial images show a high-riding model, which bridges the gap between a family hatchback and full crossover. It follows the current Citroën design language of voluptuous lines and bold front-end styling.

In typical Citroën style, passenger comfort will take priority over any notion of a sporty driving experience. Expect absorbent seats and the brand’s hydraulic bump-stop suspension, which is designed to prevent the worst bumps from disrupting the quality of the ride. 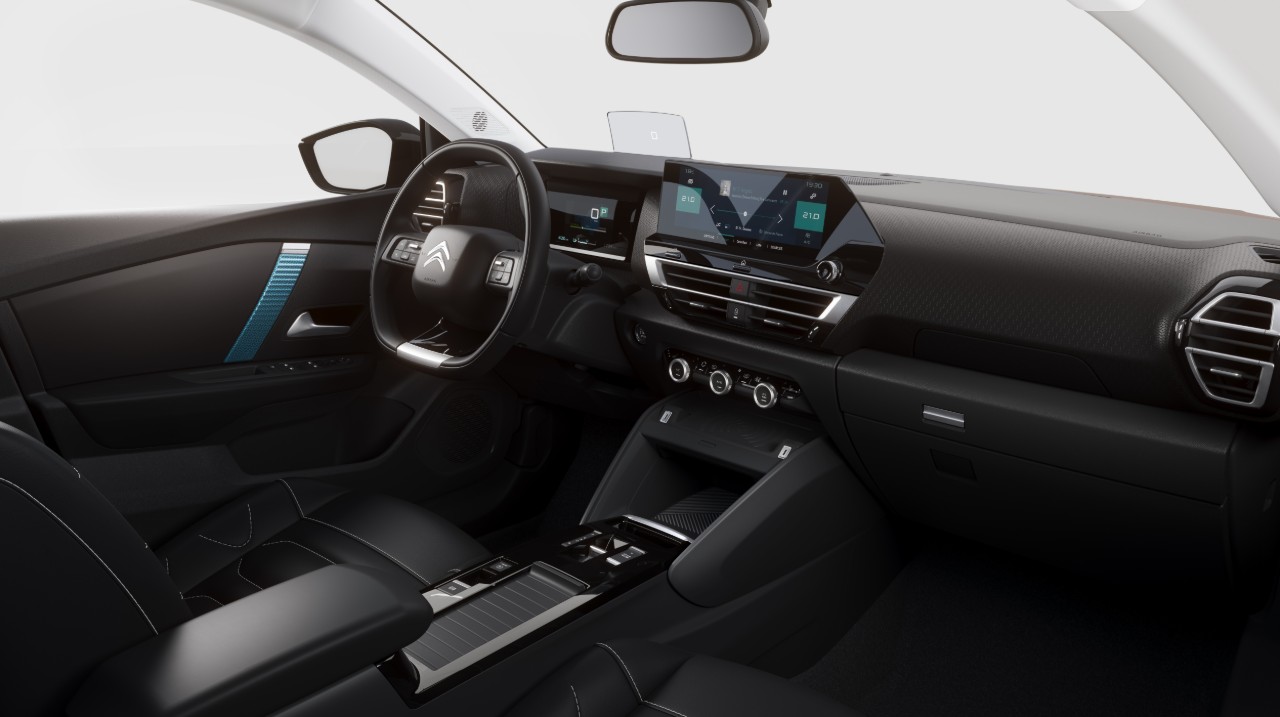 The interior has been updated over the C4 Cactus, with a wider touchscreen, a less fussy design and the re-appearance of heater buttons and knobs – controls that were relegated to the fiddly touchscreen on the current car.

Full prices and specifications are yet to be confirmed, but we’d expect the E-C4 to cost over £30,000 when it reaches showrooms.

BMW i4 (price to be confirmed) 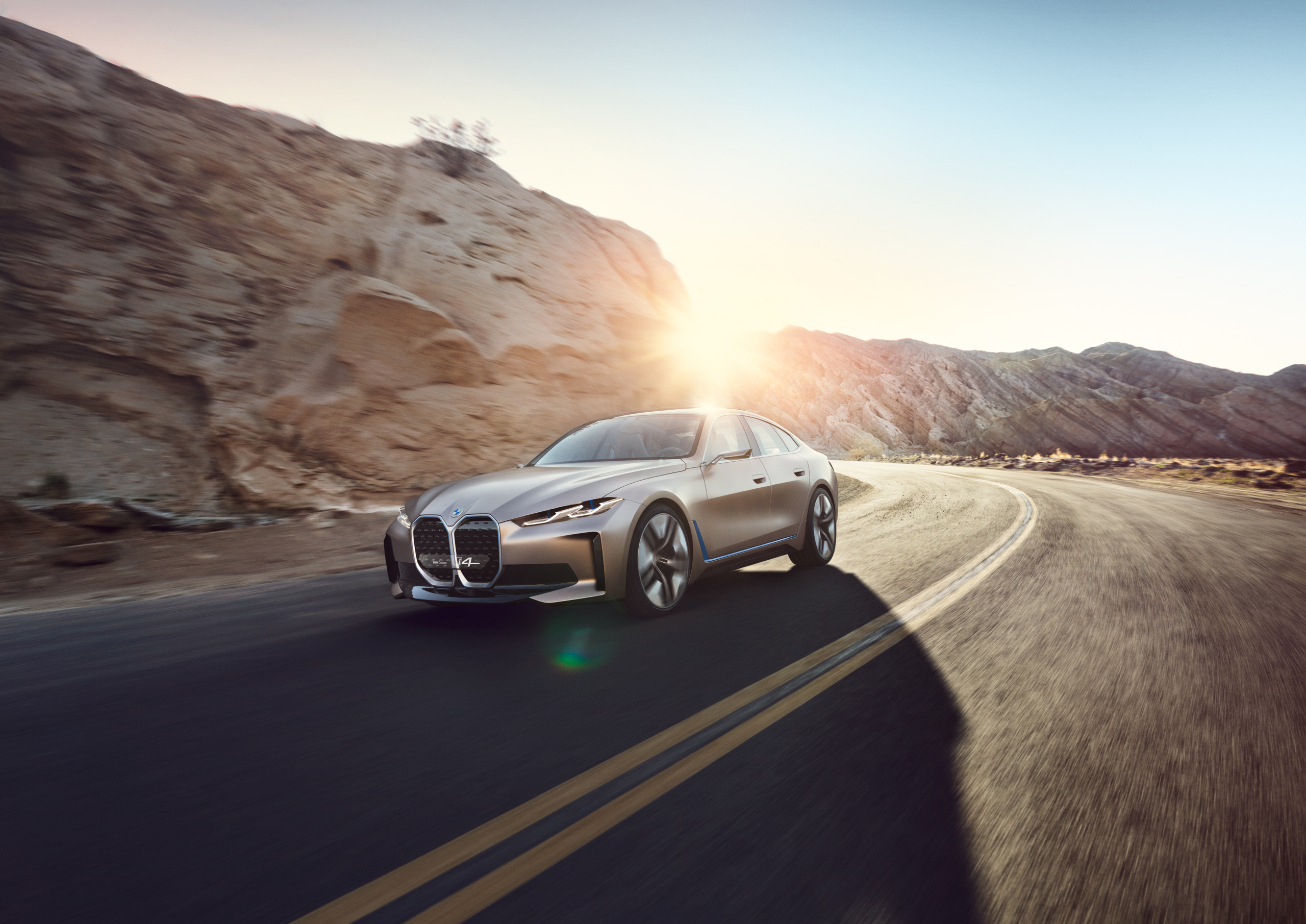 BMW has recently been converting much of its luxury car range into plug-in hybrids, and to great effect. Until now though, its pure electric offerings have been limited to just the i3 small hatchback, which has been with us for seven years.

That’s all set to change. BMW is readying an all-electric version of the popular X3 mid-size SUV – badged iX3 – that’s expected towards the end of the year. More interestingly, however, there’s a new zero-emissions four-door coupé model on the way, known as the i4.

Currently being teased as the ‘i4 Concept’ in the pictures you see here, a production version the car will go on sale in 2021 and will not only be the brand’s rival to the Tesla Model 3, but will form a key part of an expanding range of all-elected BMW ‘i’ cars expected in the next few years.

Like its Tesla rival, the i4 Concept takes a minimalist approach to the interior layout, with a large HD display replacing conventional displays and controls. Thankfully however, it appears BMW’s intuitive i-Drive control system will be carried over to this new model.

In terms of performance, the i4’s electric motor develops 530hp – significantly more than the brand’s current petrol performance coupé, the M4. BMW claims it will cover the 0-62mph sprint in ‘approximately four seconds’ and cover a distance of 373 miles between charges, thanks to its 80kWh battery pack. 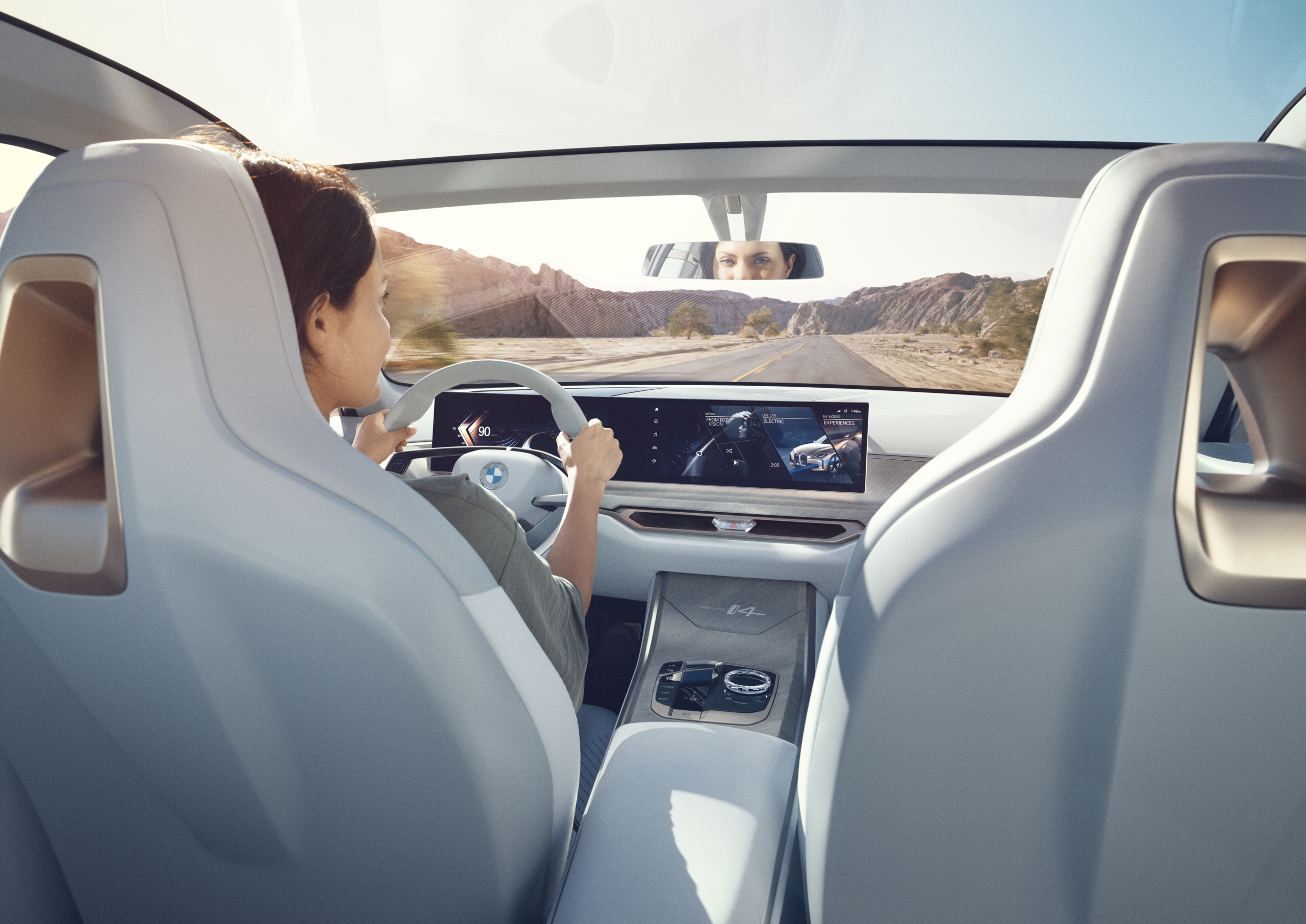 Full details are yet to be confirmed, but the production i4 is expected to be offered in a four-wheel-drive setup. Expect prices to be on a par with what you’d pay for a well specced Tesla Model 3 – around £50,000.

Head over to our reviews to find out our verdict on the BMW X5 and 7-Series plug-in hybrids.

Dacia Spring (price to be confirmed) 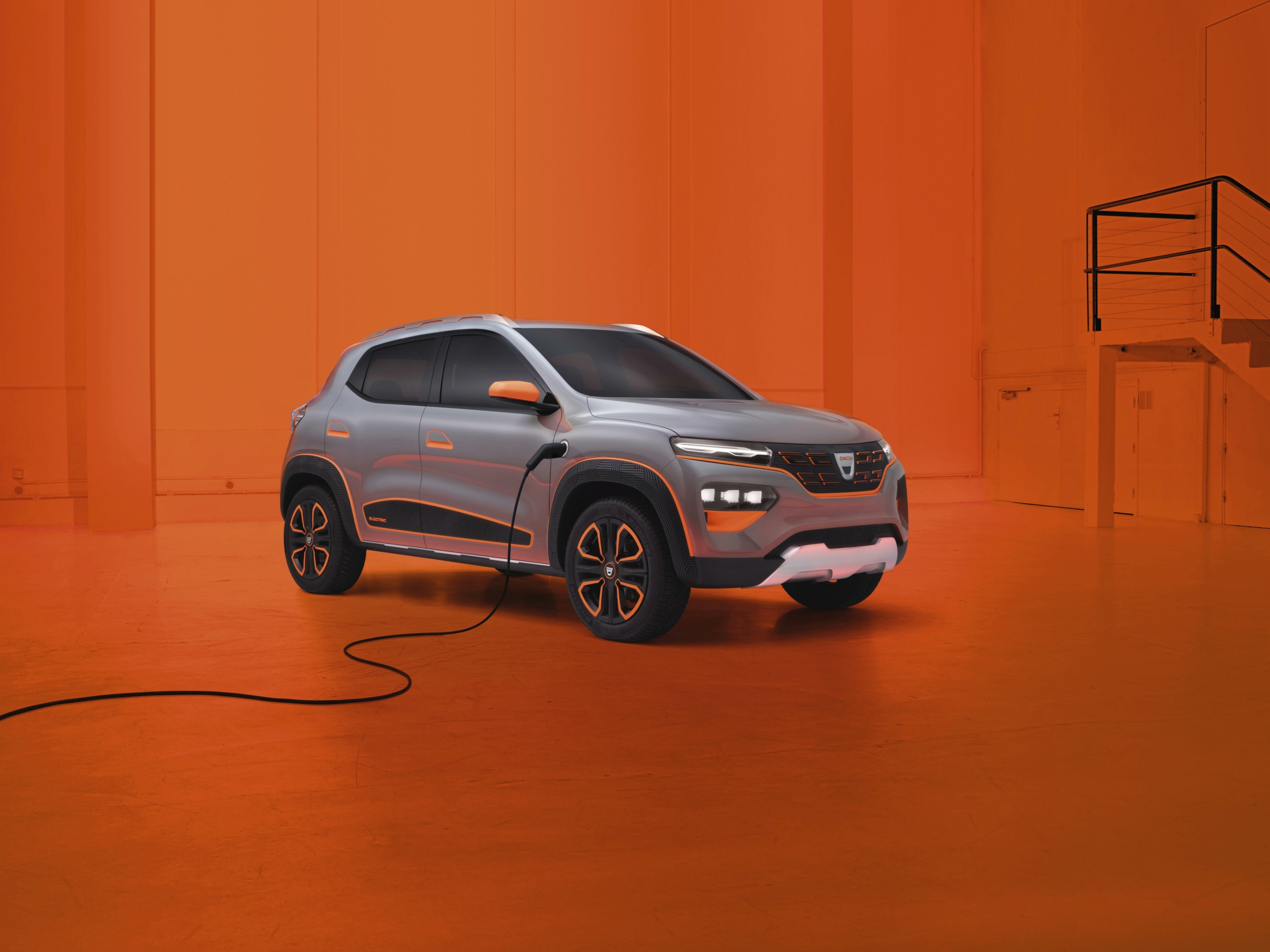 If you can hold-off buying your new EV until next year, you could well be the first to bag what is expected to be Europe’s cheapest battery electric car, the Dacia Spring. For it to take this title, it will need a retail price in the UK of less £17,445 to undercut the new Skoda Citigoe IV.

Shown here in concept form, a production version of this new city car is expected to reach showrooms in the Spring. The chunky, squat stance is reminiscent of the brand’s Duster crossover, and the Spring shares some design elements, including a wide, black front grille and tall roofline.

Aimed at primarily urban use, its claimed range is a mere 124 miles. Further specification – including full battery, performance and equipment details – are expected closer to the Spring’s launch date.

Electric cars may be the future, but are they more fault prone than their petrol and diesel counterparts? Find out in our guide to the most reliable cars.