Broadband customers should now be able to benefit from better deals and cheaper prices when their contract ends, following new commitments from providers.

A review of pricing practices by Ofcom, the telecoms regulator, has seen EE, Plusnet and Sky joining BT, TalkTalk and Virgin Media in an agreement to give all existing customers access to prices offered to new customers.

In addition, all major providers are offering protections for vulnerable customers, which Ofcom estimates will affect around one million people to the tune of £70 each per year.

Find out which providers impressed the most in our regular survey of the UK’s best and worst broadband providers.

Broadband customers set to save

Most of the major broadband providers offer enticing deals to attract new customers, but when these initial contracts come to an end, many see a significant hike in their monthly cost. These measures will help to mitigate that, with providers now agreeing to inform customers when contracts are ending and offer them a better deal.

Ofcom says that the difference between what out-of-contract customers pay compared with average prices is more than £500m a year, and estimates that these pricing changes could address over half of this total, with customers ultimately saving more than £270m per year.

It estimates that around 40% of broadband customers are out of contract, paying on average around £4.70 per month more than the average price for the service, although this can vary significantly. 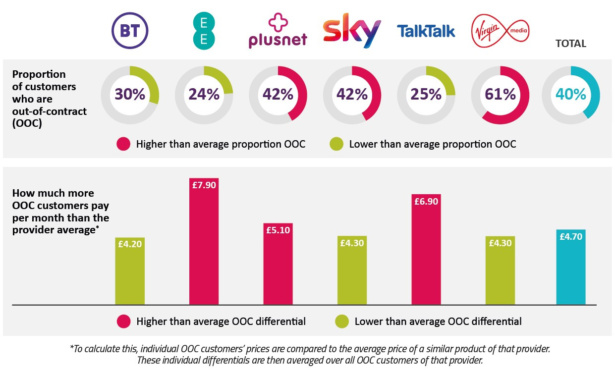 How will end-of-contract notifications work?

Your provider should warn you when a current contract is ending, and let you know what you could save by signing up to a new deal, rather than lapsing onto a full-priced contract.

You’ll then need to take action to avoid this automatic price rise, by contacting your provider to confirm you’d like to accept the contact offer.

If you feel you should have received notification about a contract that’s ending soon, or that ended recently, get in touch with your broadband provider to find out why you haven’t.

Which? welcomes positive steps by providers

Which? has long pushed for fairer prices for consumers across broadband, TV and mobile contracts and welcomes the commitments providers have made to help provide better deals for their customers.

Natalie Hitchins, Head of Home Products and Services at Which?, said:

‘It’s good to see the regulator working with providers to reduce the alarmingly large number of customers paying high prices when out of contract – our research has shown these people could be paying hundreds of pounds a year more than they need to.

‘Ofcom will need to closely monitor the impact of voluntary commitments from providers and help customers to genuinely save money, especially as a faster service is often available at a lower price.

‘End-of-contract notifications should now allow you to know in advance that your contract is coming to an end, so if you are unhappy with your internet service or you think you could be paying too much, you should look to switch a better deal.’