OLEDs grab headlines, but there’s an intriguing range of 4K LCD TVs that sit just below them in LG’s 2020 line-up: the NanoCells.

Little is known about this oddly named technology. Some say it was created by the large hadron collider, others that it was harvested from a crashed alien craft in South Korea, but does it help make picture quality better?

We’re joking of course, we know a fair bit about NanoCell TVs, so sit back, relax and see how good this technology really is. And if you’re looking for something a bit smaller we’ve tested LG’s less high-tech 43-inch range, too.

Browse more than 250 TV reviews to find the one for you.

NanoCell TVs under the microscope

OK, so the technology didn’t come from outer space – at least, we don’t think so – but what exactly does NanoCell mean?

Colours are vital to the overall TV viewing experience: too drab and the picture is dull, but too gaudy and the image looks fake, almost radioactive.

There’s also the matter of contrast. Even the most vivid colours can’t hope to stand up to overly dark contrast that blocks any vibrancy, like you’re watching the TV with sunglasses on.

Given this, LG’s ‘Pure Colour’ sounds promising. However, we’re no strangers to tech brands’ hyperbole, particularly when they’re trying to justify the cost of more expensive ranges. This is why we put TVs through such thorough testing, to establish the truth behind the hype.

NanoCell TVs debuted in 2019, but in 2020 LG has made them easier to recognise by helpfully adding ‘NANO’ to the product name. It has some 8K models in the range (which we’ll be putting through their paces soon), but, for now, we’ve only tested the 4K ones.

What’s interesting about the ranges is how similar they are in terms of spec.

Of the 4K ranges, only the NANO81 models don’t use the 3rd Gen Alpha 7 picture processor. This clever chip is in charge of upscaling even non-4K content to look 4K. It uses an enormous lookup table, sort of like an argos catalogue of images, to analyse what’s on screen and sharpen it. It does a nice job and we were happy with the clarity of the image across the board. They all have the same operating system, too, and the same remote.

Spec sheets only tell you so much though. They don’t always fully illustrate the time LG spends tweaking each range to get the most out of the technology inside. There’s still sound, too, which isn’t as easy to quantify as resolution and picture quality.

It’s these sorts of improvements that don’t become apparent until you get a team of experts to sit and examine every aspect of the TV for a month, which is exactly what we do.

Here are all our 2020 NanoCell TV reviews.

The 916NA range are top of the NanoCell heap.

The 8 Series NanoCell’s are a bit cheaper, but still have the same advanced processor. 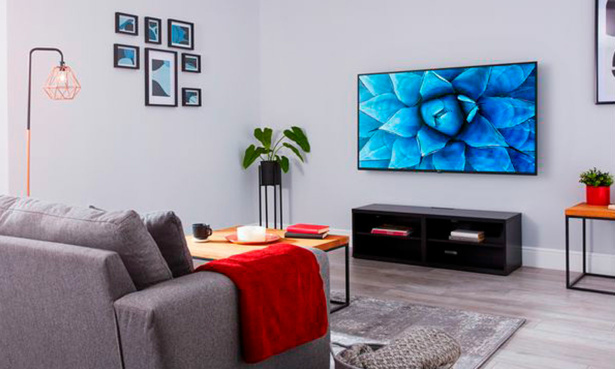 You may have noticed that there aren’t any 43-inch NanoCell TVs. We didn’t forget about them, they just don’t exist. Manufacturers certainly favour bigger sets for their high-end ranges, but LG still has a few 43-inch 4K models.

They are more basic, but that doesn’t mean they are devoid of features. LG’s remote is unique, and great. It has a motion-controlled pointer that makes selecting things on the screen simple. It would be a great remote even without the pointer, too. It works well with the operating system, which is the same across all LG’s TVs from the priciest to the cheapest.

Of course ease of use is important, but we could forgive a TV with excellent picture quality that was a pain to operate. We wouldn’t recommend a TV where the results were reversed. So where does that leave these smaller, cheaper TVs?

We haven’t found a Best Buy 43-inch TV in many years, but LG has come close and that gives us high hopes for its 2020 line-up.

This is one of LG’s cheapest and most basic 2020 models.

What about OLED TVs?

The question you might be asking yourself is: should I spend more and get an OLED? Some of the NanoCell ranges are pricey, the ones with ‘9’ in the product name in particular, but they aren’t nearly as expensive as LG’s top-tier OLED sets.

The 65-inch LG OLED65BX6LA, which is the brand’s cheapest OLED model, is more than £1,000 pricier than the same-sized LG 65NANO916NA, one of its most high-end NanoCell sets.

So the better question is: are LG’s OLEDs worth all that extra money compared to a NanoCell TV?

The good news is we can answer that question. Head to our LG OLED reviews to see if they are worth their high price tags.