Welcoming what Apple’s dubbed a ‘new era’ of iPhone, Apple has unveiled four (yes, four) brand new smartphones. These range from the super-sized (and highest-priced) 6.7-inch iPhone 12 Pro Max (£1,099), to the more diminutive 5.4-inch iPhone 12 mini (£699), for those that prefer a smaller phone.

There’s at least one standout difference from the iPhone 11: for the first time, we’ll have 5G-capable iPhones in the palm of our hand. That’s a big deal.

Apple’s action-packed launch event also gave us a glimpse of the new HomePod mini, an affordable version of the original HomePod that keeps the focus on audio quality over voice commands.

There are lots of new gadgets to get through, so read on for a closer look at what separates each model and what the iPhone 12 range offers that differs from its predecessors.

Apple October 2020 Event: at a glance

Take a look at the key differences between the two iPhone ranges in our video.

Despite the noticeable difference in price, all four new iPhones run on the same Apple A14 Bionic chip. The iPhone 12 mini is the smallest of the bunch (no surprises there) with a 5.4-inch display, while the iPhone 12 Pro Max has a heftier 6.7-inch screen.

Here’s a closer look at how the four smartphones compare on paper:

With new iPhones on the way, some retailers may offer deals on older models, especially as Black Friday approaches. Keep an eye on our Best Black Friday deals updates for the latest and greatest offers from Apple and other leading tech brands.

Support for 5G on the iPhone 12 could make a huge difference to the way you use your mobile, assuming you’re in an area with 5G coverage. Simply put, 5G is capable of providing much faster download speeds compared to 4G. This should guarantee a much more reliable internet connection, which equals higher-quality video streams (without buffering) and less lag when you’re playing online games.

During its virtual presentation, Apple claimed that the iPhone 12 Pro models offer ‘the most 5G bands on any smartphone’ and therefore ‘the broadest 5G coverage worldwide’.

In the short term, support for 5G on the new iPhones probably won’t make too much of an impact, as 5G coverage in the UK has been focused around big cities initially – read our guide to find out more about what 5G is and where you can get it. But as the 5G network rolls out and becomes more widely available, iPhone 12 users will be pleased to hear that they won’t have to swap phones to take advantage of the new technology.

iPhone 12: thinner and lighter than its predecessor

Apple kicked off its barrage of smartphone announcements with the iPhone 12, AKA ‘the very first iPhone with 5G’. It rocks a flat-sided body that reminds us of the iPad Pro and has an aluminium frame.

This new arrival has a 6.1-inch display like the iPhone 11, but Apple has gone back to the drawing board and managed to reduce the size of the screen borders. A notch sat at the top of the phone houses the speaker grill and the front-facing camera, or TrueDepth camera as Apple calls it. We’re told that the iPhone 12 is 11% thinner, 15% smaller and 16% lighter than the iPhone 11. 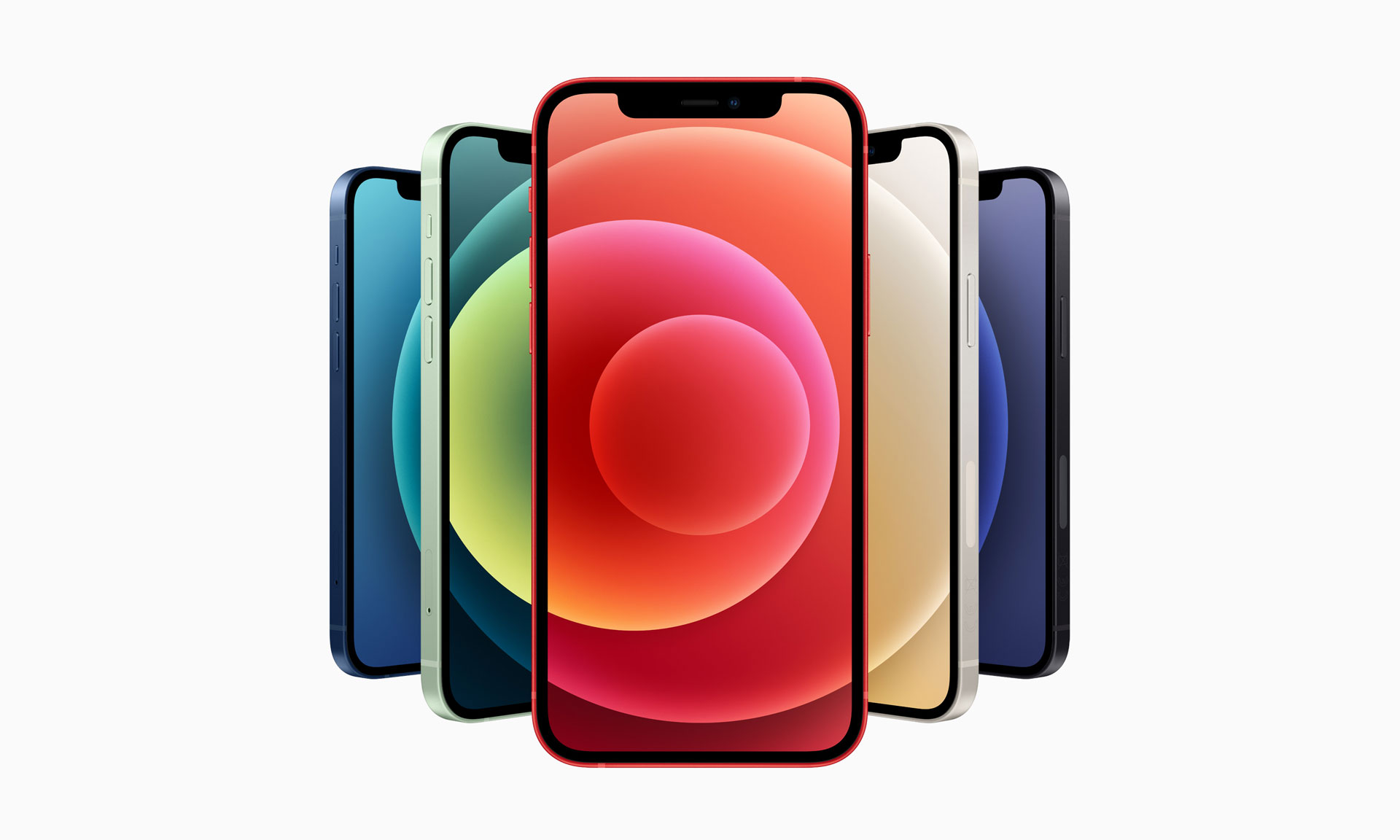 Let’s focus on cameras. There are two on the back of the iPhone 12 – it’s a duo made up of a 12Mp wide lens and a 12Mp ultrawide lens (with 120-degree field of view). Apple is convinced you’ll get better low-light performance, thanks in part to machine learning technology that automatically adjusts colour and contrast levels for a sweeter snap. Up front, you now get Night Mode support on the TrueDepth camera.

This new technology is powered by Apple’s next-gen chip, the A14 Bionic. The tech giant’s presentation got a little nerdy at this point, with Apple boasting that it has come up with ‘the fastest chip ever in a smartphone’.

This new chip is meant to improve performance and offer a lag-free experience whether you’re running lots of apps at once or playing a fast-paced multiplayer game. We’ll be sending the iPhone 12 off to the Which? test lab as soon as possible to see how it fares.

The iPhone 12 is available to pre-order from 16 October and available to buy on 23 October. It comes in five colours: black, white, red, green and blue.

How  much will the Apple iPhone 12 cost?

Apple’s iPhone 12 looks solid on paper, although that 6.1-inch display might be a little on the big side if you’re used to having a smaller mobile in your pocket. Don’t click away just yet though, as Apple has another smartphone to try and tempt you with: iPhone 12 mini.

The name is a complete giveaway – this iPhone is a smaller version of the iPhone 12. In fact, it has the exact same list of features as its slightly larger sibling, but manages to become the smallest, thinnest and lightest 5G smartphone in the world. The iPhone 12 mini swaps out a 6.1-inch display in favour of a 5.4-inch screen. 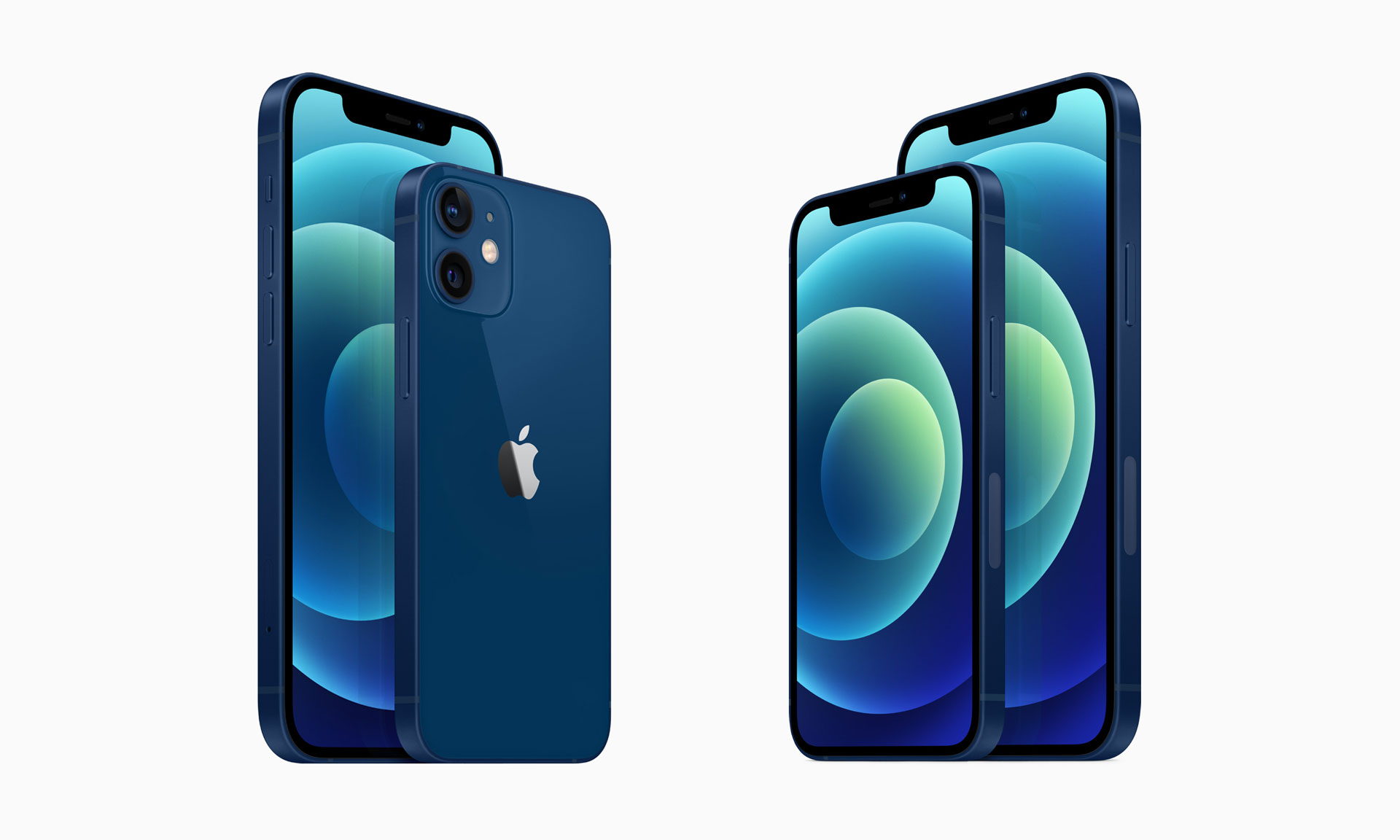 Both the iPhone 12 and iPhone 12 mini are water-resistant, with IP68 ratings, in theory protecting the phones in up to 6 meters of water for up to 30 minutes.

How  much will the Apple iPhone 12 mini cost?

Apple’s ‘Pro’ iPhone models have always offered a little more oomph specs-wise than the standard releases. They’re designed for folk that use their smartphone for more resource-intensive tasks such as fast-paced gaming, video editing and advanced photography techniques.

Compared to the standard iPhone 12, the Pro variant has an extra rear camera (a 12Mp Telephoto lens) and the potential for more storage space. The iPhone 12 maxes out at 256GB of internal storage, whereas splashing the cash on the Pro model gets you up to 512GB. 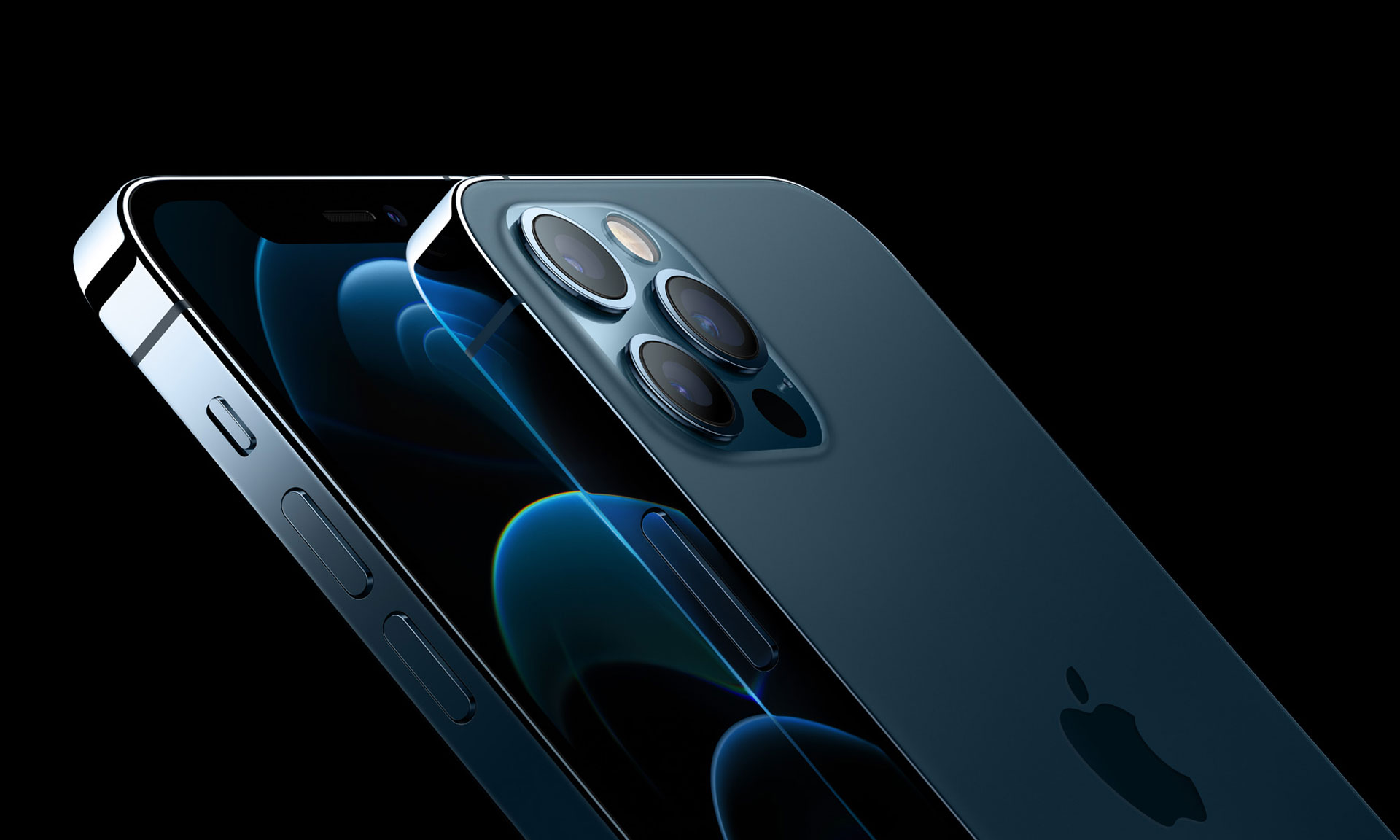 You get an edge-to-edge Super Retina XDR display on both the iPhone 12 Pro and iPhone 12 Pro Max. On the iPhone 12 Pro, you’ll be tapping away at a 6.1-inch display, which is the same size as the screen found on the standard iPhone 12. Again, this iPhone model is powered by the A14 Bionic chip, which Apple says will enable ‘console-quality gaming experiences’ while still managing to deliver ‘great battery life’.

Apple’s new iPhone 12 Pro is made of a durable stainless steel, which gives it a touch of class. There are four colours to pick from: gold, silver, graphite and the new pacific blue.

How  much will the Apple iPhone 12 Pro cost?

If you’re shopping for a new smartphone and a big screen is at the top of your ‘wants’ list, then the iPhone 12 Pro Max will be right up your street. It has a whopping 6.7-inch Super Retina XDR display, the largest of any iPhone to date.

Not only is the display bigger, but it also runs at a higher resolution – 2,778 x 1,284 pixels compared to 2,532 x 1,170 pixels on the iPhone 12 Pro. This should mean improved detail and colour accuracy on-screen, but we’ll need to wait for the results of our lab tests before we validate this. 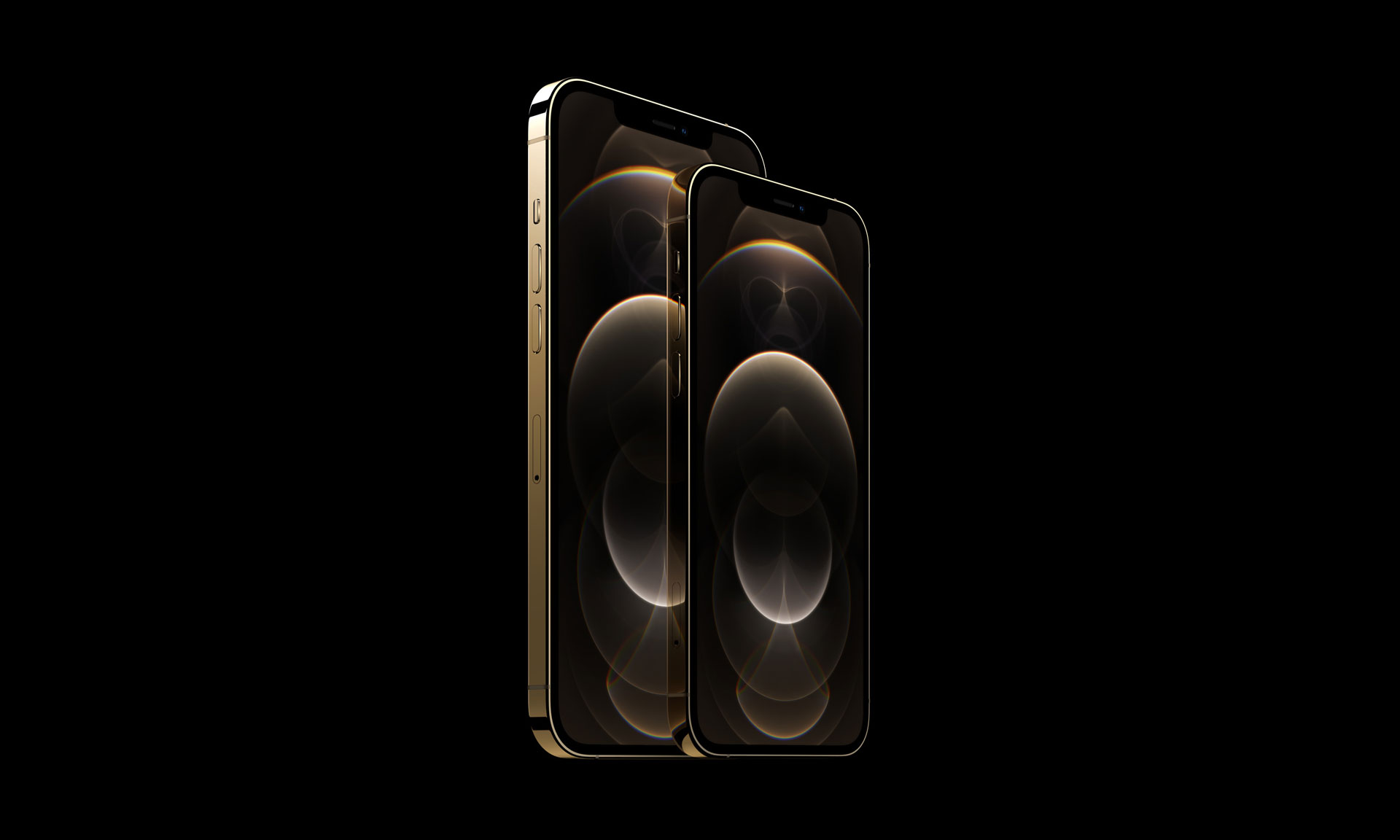 The iPhone 12 Pro Max has three rear-facing cameras. With the support of the A14 Bionic chip, you can set a 12Mp wide lens, 12Mp Ultra Wide lens and 12Mp Telephoto lens to work. Apple says that the new Wide camera on this model boasts a 47% larger sensor compared to the iPhone 12 Pro, which equals a reported 87% improvement in low-light conditions.

How  much will the Apple iPhone 12 Pro Max cost?

We’ll be hotfooting the new Apple iPhone 12 range to our lab experts as soon as they’re available, so keep an eye out for updates. In the meantime, you can find out if their predecessors impressed in our tests in our expert iPhone reviews.

November sees the release of Apple’s second ever smart speaker, the HomePod Mini.

It’s available to preorder from 6 November to be delivered from 16 November.

Before you buy, see what we thought of the original in our Apple HomePod review. 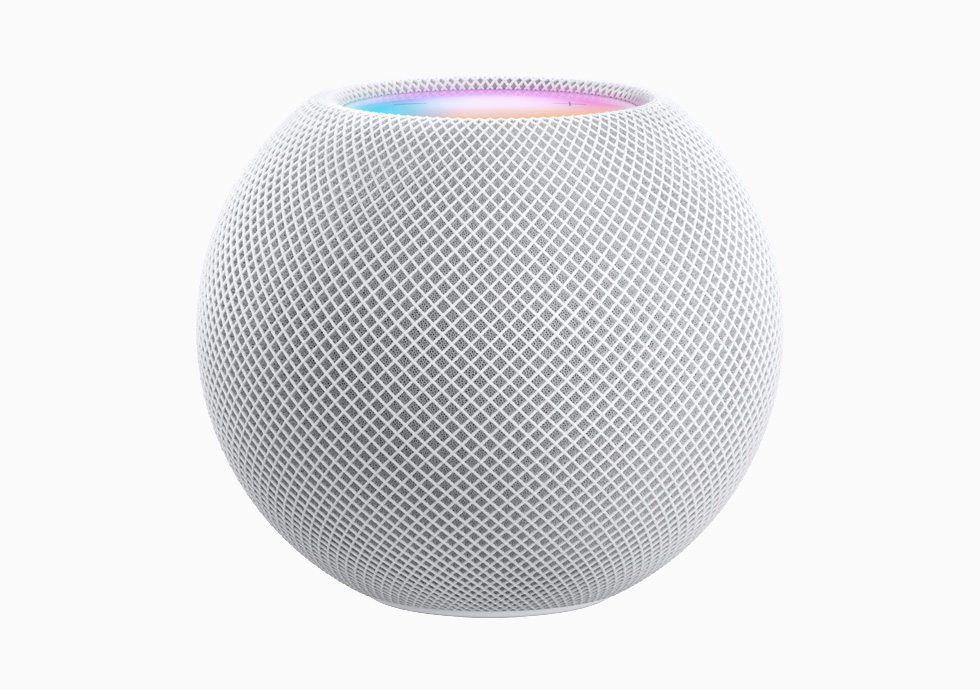 There’s a surprising amount of functionality packed into such a small speaker. Saying ‘Hey Siri’ activates your voice assistant, offering updates on everything from your daily appointments to today’s news. Siri can recognise up to six members of your household and personalise the experience for them.

It also offers 360-degree audio for ‘room filling sound’. You can double up the speakers in a room as a stereo pair for an immersive sound experience, or add more speakers to different rooms to multiple rooms to play music in sync.

You’ll get the most out of the HomePod Mini by integrating your existing Apple devices. It can pick up calls from your iPhone, play music from your Mac and link up with an Apple TV to enhance its sound.

As expected from Apple, there’s some style in the substance too. You can choose to have the distinctive diamond mesh fabric in either white or space grey. 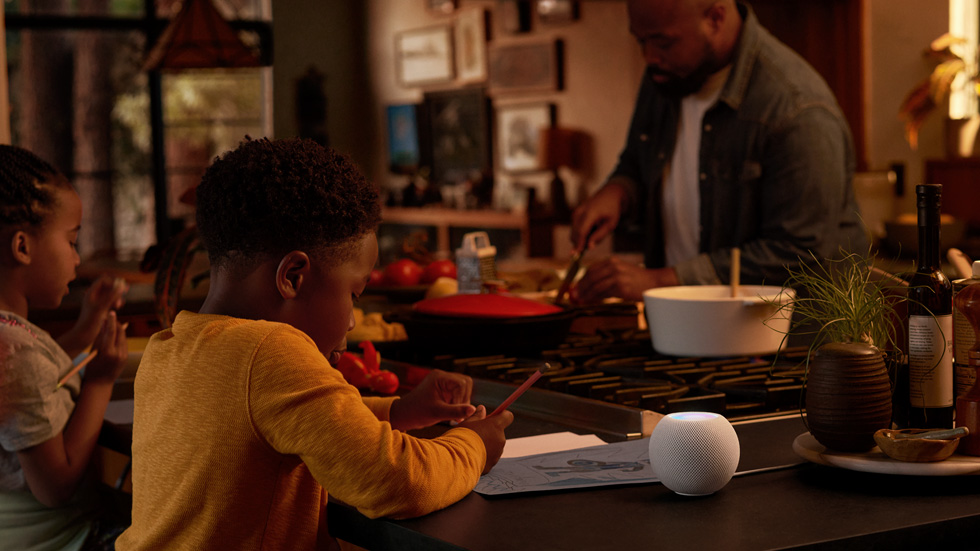 Like its predecessor, the HomePod mini is designed to stream seamlessly from Apple Music and Apple Podcasts. If you prefer to listen to music from a third party app such as Spotify or Tidal, you may want to consider one of our Best Buy wireless speakers.