Pay more, get faster performance. That’s been the rule laptop and desktop buyers have followed for decades. Apple just turned that all on its head by popping its efficient new M1 chip into some of its cheaper devices. But what does that mean for your next computer, be it an Apple, Acer, HP, Microsoft or any other brand?

With Apple products having some of the highest average prices in the world of tech, the game-changing potential of its new chip may have passed many budget-conscious shoppers by, since it was previously only installed in Apple’s highest-end laptops.

Until last week, that is, when Apple rolled out its M1 processor to more of its tech gadgets, including the iPad Pro and Mac Mini. While still not ‘cheap’ by most people’s standards, these are a touch more wallet-friendly than Apple’s premium laptops.

That’s a big deal. Below we explain why, but first a refresher on what this new M1 chip actually is.

Our guide on the best MacBooks explains the difference between models and the impact the M1 could have on their performance.

What is the Apple M1 chip?

The M1 is a new ‘system on a chip’ (SoC) designed in-house by Apple. It replaces Intel as the producer of most of its computer processors. An SoC pulls together all the technical wizardry that’s needed to run a computer on to one physical chip.

With previous processors from the likes of Intel, a laptop or desktop computer needs several chips to make features work. A CPU chip is the brains of the operation, delegating tasks to various parts of the computer and performing millions of calculations per second for every click, every file and every frame of your favourite YouTube videos.

The CPU connects to other chips including those for memory (Ram) and chips controlling the USB ports and security features. Having everything in one place in an SoC means that, in theory, the chip should be more efficient overall.

This kind of chip design (based on the British chip company ARM’s designs) is found in practically every smartphone and tablet on the planet. ARM-based chips are small and power efficient, ideal for pocketable smartphones with tiny batteries. And now, Apple hopes, ideal for laptops and desktops as well.

We’ve put the latest M1 MacBook Air and MacBook Pro through our tests – find out if the new chip lived up to the hype.

What does it mean for Apple devices?

Where previously the price of an Apple device roughly rose in line with the speed of the processor, with added features adding a flat cost on top, its new M1 chip has now levelled the performance playing field.

In a large number of devices, Apple is now providing the exact same processor (which costs the same to produce) and instead asks you to decide to pay for the type of device that suits you.

You don’t need to worry about making a compromise between price and speed any more. By installing the same M1 chip across all its devices, Apple is effectively telling you that no matter which one you buy, you’ll get similar performance to do the tasks you care the most about.

Previously, if you wanted an Apple computer on a budget you’d perhaps buy a Mac Mini and accept the slower Intel Core i3 processor, or if you were splashing out you’d plump for a top-spec MacBook Pro with a Core i7.

Now it’s more about picking the device that fits best into your lifestyle. Want a tablet with powerful specs? iPad Pro. Need a compact desktop? Buy a Mac Mini.

Speed’s not an issue – but other features still matter

Of course it’s not quite that simple – otherwise why would Apple bother having standard, Air and Pro versions of its iPads and laptops priced completely differently. You pay more for an M1 iPad Pro than a standard model because it has a top-tier screen, a battery and a super-thin design, for example.  And you’ll need to pay more if you want more storage or Ram and extra software.

Other factors that come into play include the cooling method in use, which can matter during long, challenging tasks when you’d expect your computer to heat up and get noisier – such as rendering a huge batch of photos or editing a video.

The fastest models (the MacBook Pro, iMac and Mac Mini) all have fans, while the rest make do with ‘passive’, silent cooling. The fan-cooled ones will be quicker when performing these tougher tasks and based on our testing of the new MacBook Air (fanless) and MacBook Pro (with fan), this has proven to be true.

What could this mean for your next Windows computer or Chromebook

In the short-term, Intel and AMD processors will continue to be at the heart of the majority of Windows laptops and Chromebooks.

So, unless AMD and Intel choose to entirely change the way they produce processors (they currently almost exclusively produce chips that use the so-called ‘x86’ architecture instead of the ‘ARM’ architecture used by Apple), things aren’t likely to change any time soon.

However, ultimately AMD and Intel may want to respond with their own versatile chips that can be used in all sorts of devices. 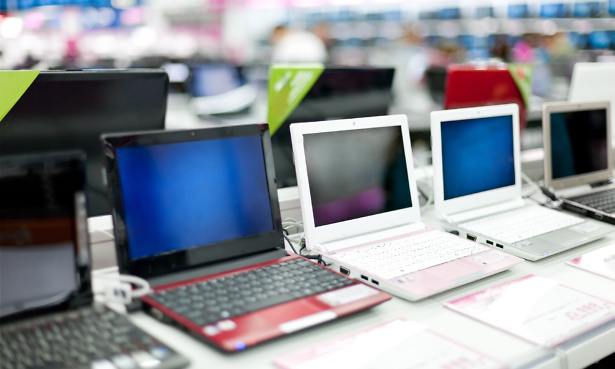 Another alternative is that laptop manufacturers start to look elsewhere for their processors. Qualcomm and MediaTek, which make SoCs for many of the biggest smartphone brands, could become more popular with laptop manufacturers looking for a way to bring good performance and power efficiency into their devices.

If laptop makers went down this route, however, consumers would have to be willing to accept that laptops using these sorts of chips would likely limit them to downloading compatible apps from the Windows Store, for example.

We have seen a handful of laptops like this in recent years, with the Samsung Galaxy Book S probably the most obvious example, as well as a few very cheap Chromebooks, but none have really made it into the mainstream.

A third possibility is that manufacturers themselves take Apple on at its own game, and develop their own, bespoke chips that work perfectly with their own devices. It’s a tough and expensive way to go about things, but it’s not entirely out of the realms of possibility.

Regardless how they happen, we think that changes are afoot – even if they won’t happen overnight. And if Apple’s strategy is successful, it may even bring the price of high-performance laptops down a little as buyers start to realise that faster doesn’t necessarily have to mean more expensive.

Apple has played its hand. What will its rivals do in response?

Need a new computer sooner than later? Find the one that offers the best balance of price and performance with our full laptop reviews.