Modern cars come with all sorts of tech intended to make you safer, whether it’s motorway lane-keep assistance or airbags everywhere from your chest to your knees. So what safety tech is a must-have? We reveal the latest crash test results from safety body Euro NCAP and give expert advice on the best safety tech to look out for.

This summer sees the hotly anticipated launch of Hyundai’s premium brand Genesis in the UK. First launched in South Korea and the US in 2015 and 2016 respectively, it’s now arriving in Europe, beginning with the UK, Germany and Switzerland.

The European Genesis launch will start with its largest and newest cars. The G80 saloon and GV80 SUV rival the likes of the Mercedes E-Class and Mercedes GLE respectively, and take the fight squarely to Mercedes and other dominant German luxury brands such as Audi and BMW.

Find out how they performed in Euro NCAP’s safety crash tests below, alongside popular family favourite the Citroën C4 and the sporty, boldly styled BMW 4 Series coupé and convertible.

Best cars for 2021: our recommendations are based on independent tests of safety, fuel efficiency, emissions and how great a car is to drive.

What car safety tech is most important? 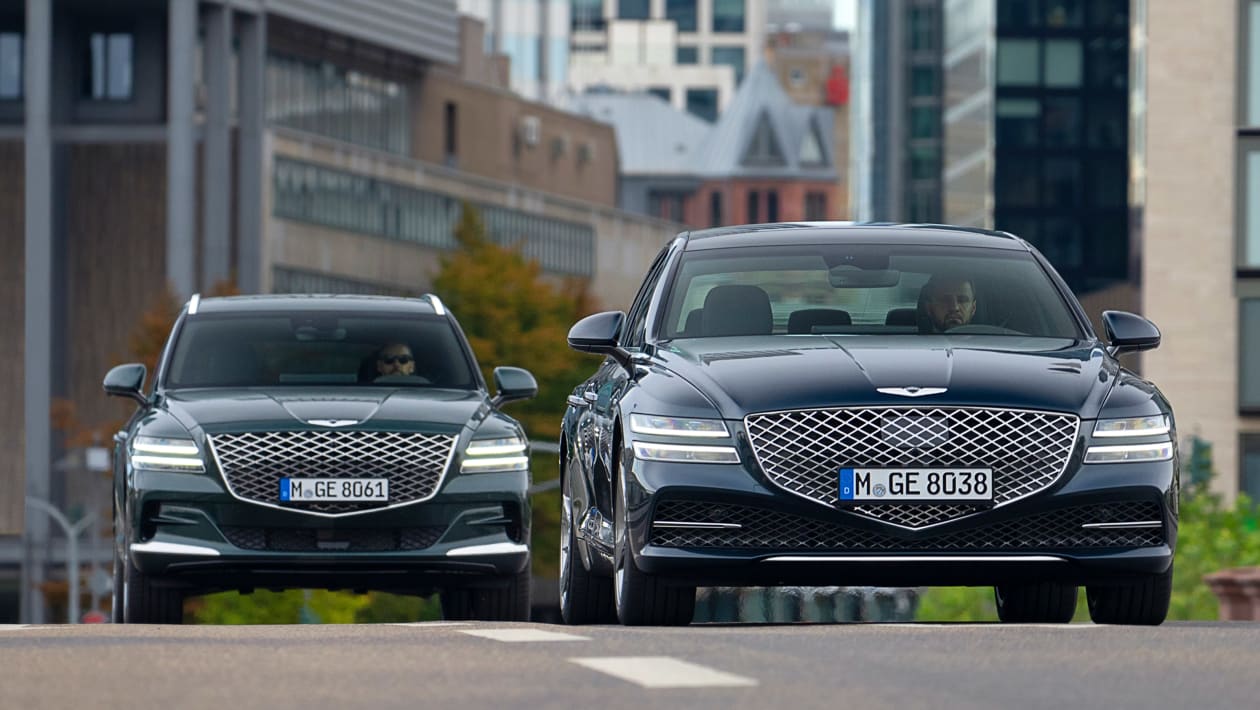 Car safety is now not only about how a car reacts to a collision but also thwarting or reducing the severity of accidents in the first place. This is definitely a case of prevention being better than cure.

That’s why so-called autonomous emergency braking systems (AEB), which automatically brake the car when a collision is imminent, are the most important safety tech in a modern car. By automatically applying the brakes when the car detects an imminent impact, the force of the collision can be much reduced or avoided entirely.

Most of the latest cars now launching have AEB systems installed, but they’re not all equally good. Some won’t work in all situations. For example, Euro NCAP recently exposed that the Dacia Sandero’s AEB system fails to detect cyclists and pedestrians.

That’s why it’s so important to check Euro NCAP’s safety ratings. You’ll find them listed in any of our new and used car reviews.

Other safety features worth looking out for, but which are implemented better in some cars than others, include: 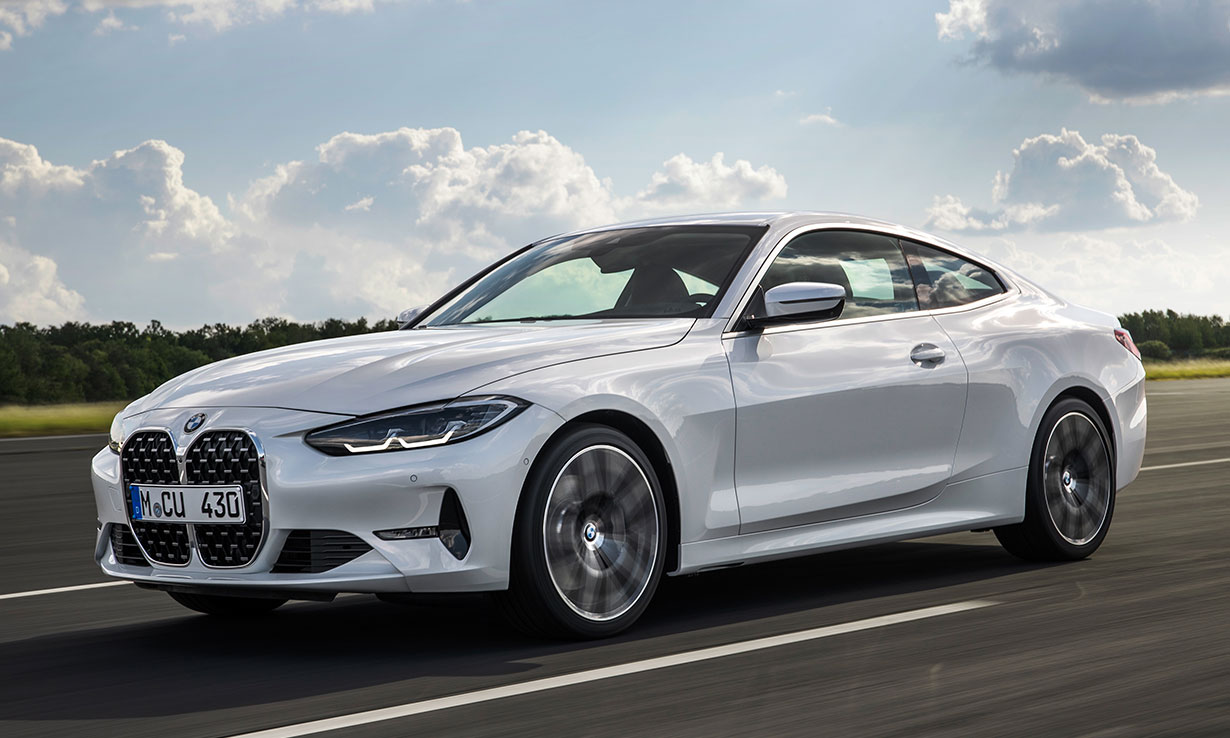 The car’s standard-fit AEB system scored maximum points in Euro NCAP’s tests at low city-driving speeds, with collisions avoided in all its tests.

This sounds very promising, but is it a well-rounded car overall? The BMW 4 Series coupé will be back from our lab in a few weeks, so watch this space.

In the meantime, we put it through its paces in our First Drive BMW 4 Series review. 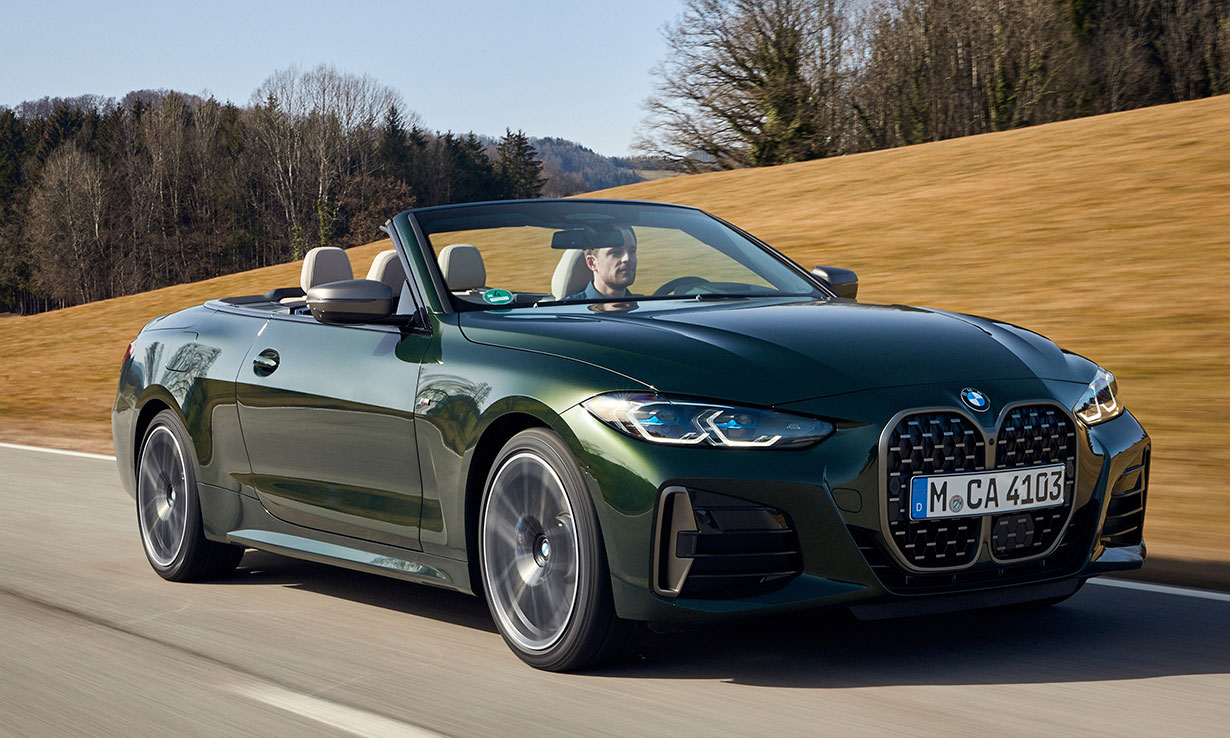 The convertible version of the BMW 4 Series has received almost identical results to the coupé version from Euro NCAP and the same five-star overall rating, so you don’t need to worry about compromising on safety.

One weaker area Euro NCAP noted was that some child restraint systems could not be properly installed due to the shape of the rear seats. Euro NCAP managed to fit many styles just fine though, so you’ll just need to take care which child car seat brands you choose and how you install them if this is an issue for you.

Find out more about all the cars BMW has to offer and how reliable BMW cars are by heading to our BMW brand page. 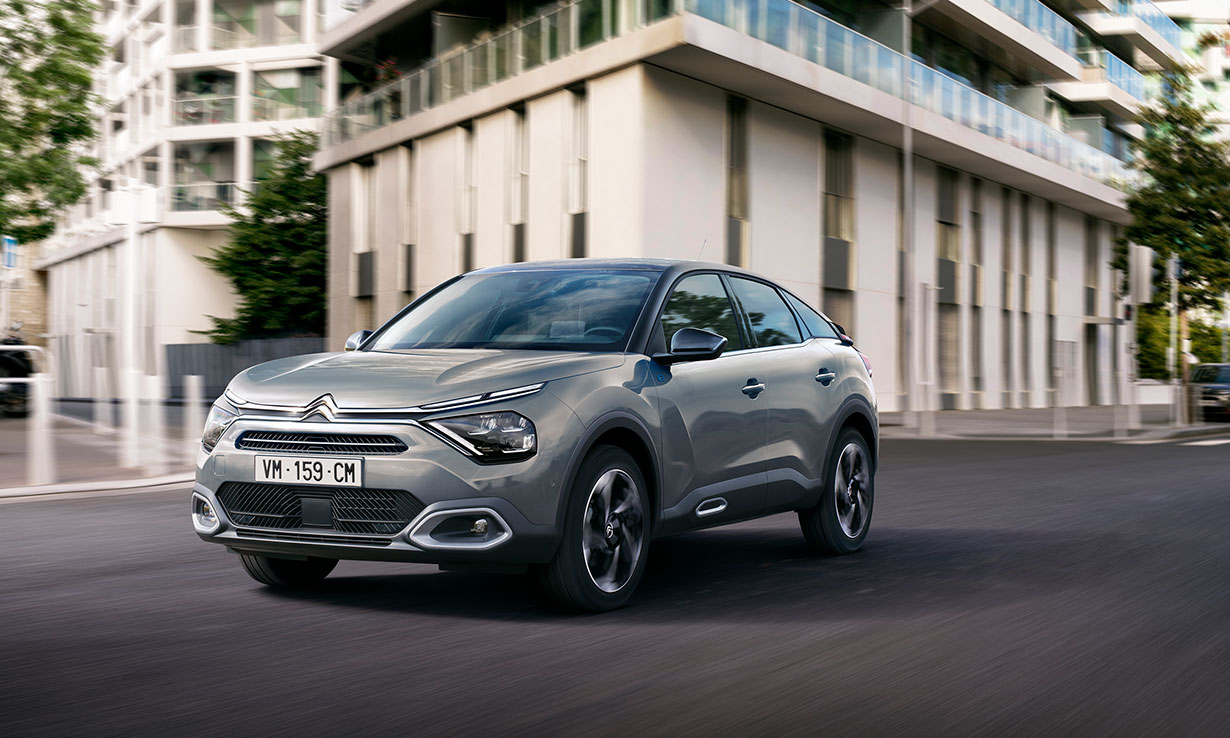 The Citroën C4 family mid-sized hatchback performs well in Euro NCAP’s crash tests, but it doesn’t quite match rivals such as the Ford Focus and Volkswagen Golf. Euro NCAP’s four-star safety rating applies to all versions of the C4, including the new all-electric ë-C4.

One area Euro NCAP said left room for improvement was the C4’s AEB system. It said the AEB system successfully detected some vulnerable road users, as well as other vehicles. However, for pedestrians the system performed ‘marginally’, only avoiding or mitigating collisions in some of the tests performed.

Meanwhile, in Euro NCAP’s crash test of the C4 into a front barrier offset to one side, the front passenger dummy’s lower leg protection was rated as ‘poor’.

Furthermore, for side impacts, a lack of a centre airbag or other countermeasure meant Euro NCAP said there was ‘weak’ protection to stop occupants in the car from colliding into each other.

While we wait for the new Citroën C4 to come back from our test lab, find out how the previous generation model did in our Citroen C4 (2011-2018) review. 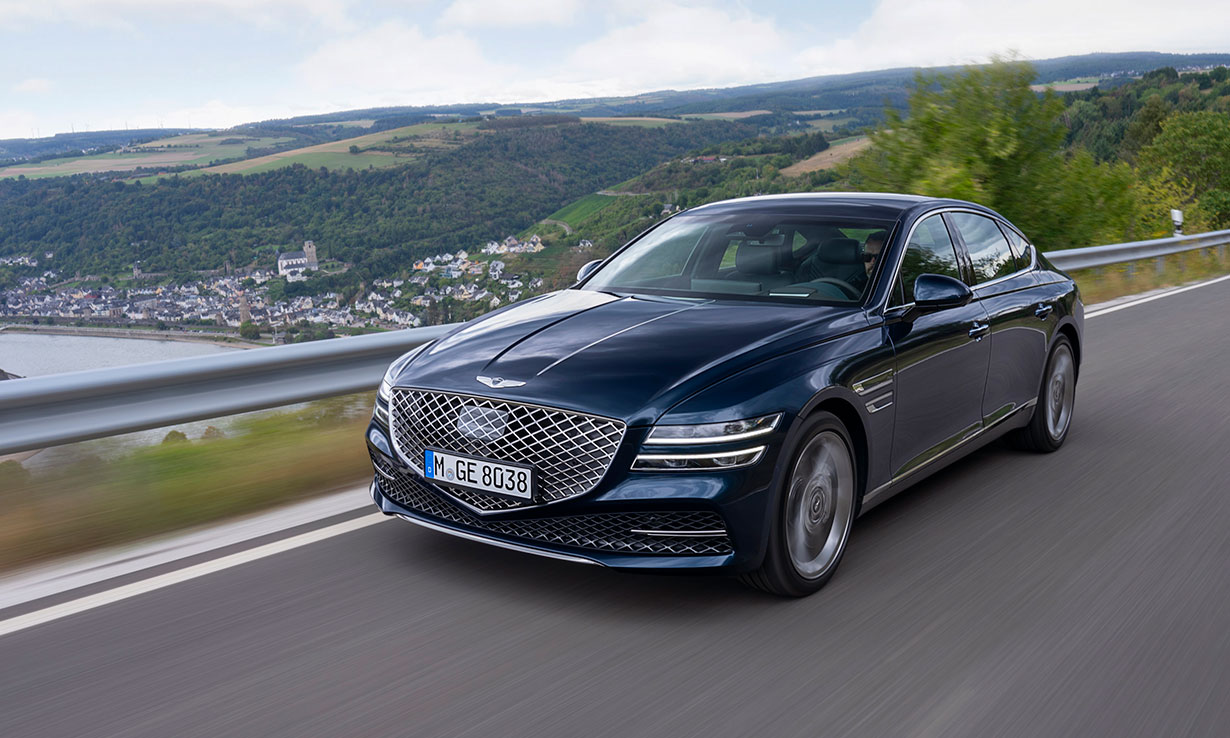 The Genesis brand marks its arrival on UK shores with a strong safety record for its first two cars, both achieving a maximum five-star rating. Compared with BMW’s latest results for the 4 Series coupé and convertible, both Genesis cars score higher for their safety assistance systems, with the GV80 scoring 88% versus 72% for both BMW models.

However, the GV80’s protection for vulnerable road users is significantly lower than for BMW; it scores 66% for this, because the front design of the car offers less protection for pedestrians. Nevertheless, it’s still a very safe car.

The GV80 is a large SUV, rivalling premium cars such as the Mercedes-Benz GLE and BMW X5.

Once it’s available this summer, buyers will be able to buy the car entirely online, and there will be a physical studio in London. Genesis boldly claims its customers will ‘never need to visit a dealer again’ due to its ownership plan, with every customer being assigned a personal assistant who is their sole point of contact through their buying process and ownership.

Does the record of parent brand Hyundai make Genesis cars seem promising? Find out on our Hyundai brand page. 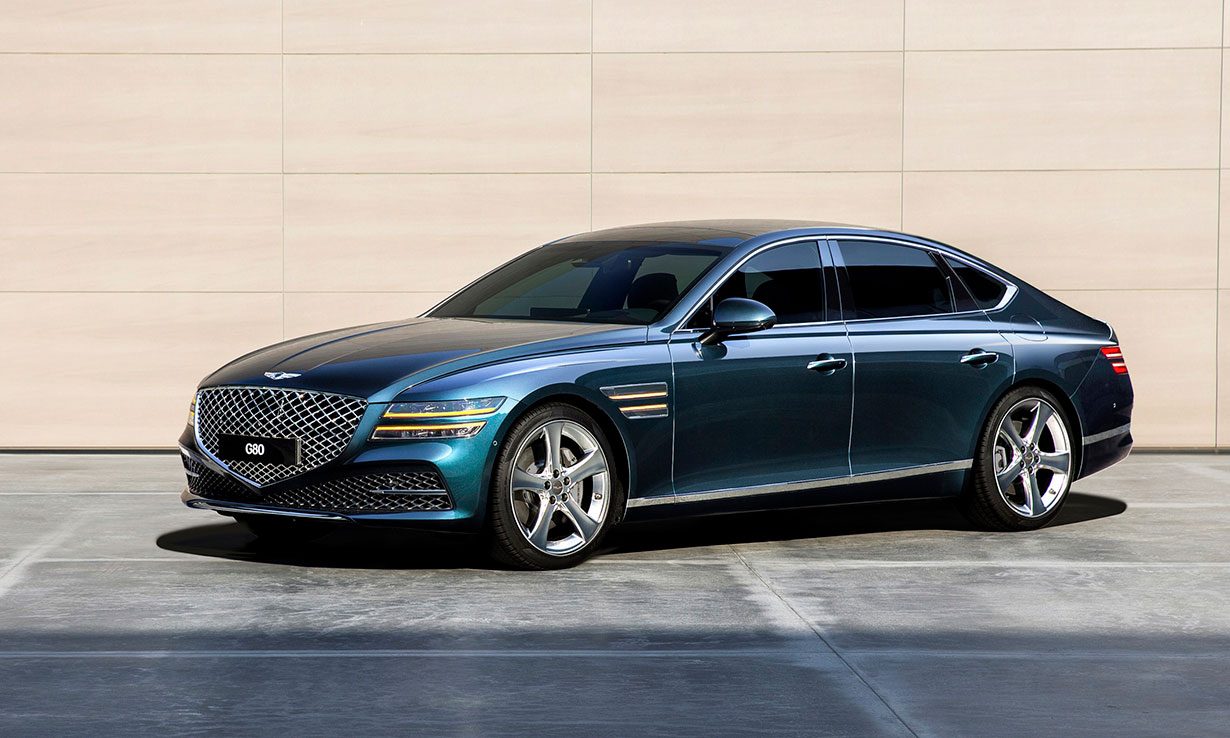 The Genesis G80’s five-star rating rewards the safety equipment it packs on board, such as lane-keep assist for motorways, an effective AEB system and advanced cruise controls.

It’s the top performer in Euro NCAP’s latest results for its safety-assistance systems, with a 91% score, including how its AEB system successfully detected imminent collisions with other cars out on the road.

The G80 is launching this summer, and there will be two trim levels to choose from: Premium Line and Luxury Line. The entry-level model is rear-wheel drive and powered with a 207hp 2.2-litre four-cylinder diesel engine. For more power choose the 300hp 2.5-litre four-cylinder turbo petrol engine, which also adds four-wheel drive.

What competition is in store for Genesis? Find out which large cars have performed best in our tests by heading to our best large cars for 2021.