The latest Which? car survey revealed that the majority of breakdowns (37%) happen on your front doorstep, so how much should you expect to pay if your car won’t start outside your home?

On a mission to find the cheapest at-home breakdown cover, we’ve crunched the numbers and compared plans from big-name providers including the AA, Green Flag, RAC and Start Rescue.

We soon realised that just one provider in our study covers breakdown at home with its lowest tier of membership – usually, you’ll end up paying extra.

If your car gives up at home and your current package doesn’t include at-home cover, you’ll likely have to upgrade on the spot. That could see your annual bill rising by up to £60.

We not only show you how much more you’ll pay, but we also reveal the cheapest policies. Keep scrolling for the details.

Price isn’t the only thing you need to consider. We survey breakdown customers so we can reveal the best car breakdown providers that will almost always reach you in under an hour.

How much is breakdown cover?

It’s a very common question, and one that depends entirely on what type of breakdown cover you need and the level of cover.

According to our pricing research, you’ll always pay more for personal cover compared to vehicle cover.

Based on prices from the breakdown providers included in our study, the average cost increase from a vehicle plan to a personal plan is around £16 a year.

According to a report by market research company Mintel, ‘adults with children under 18 who live in cities are most interested in personal cover.’ 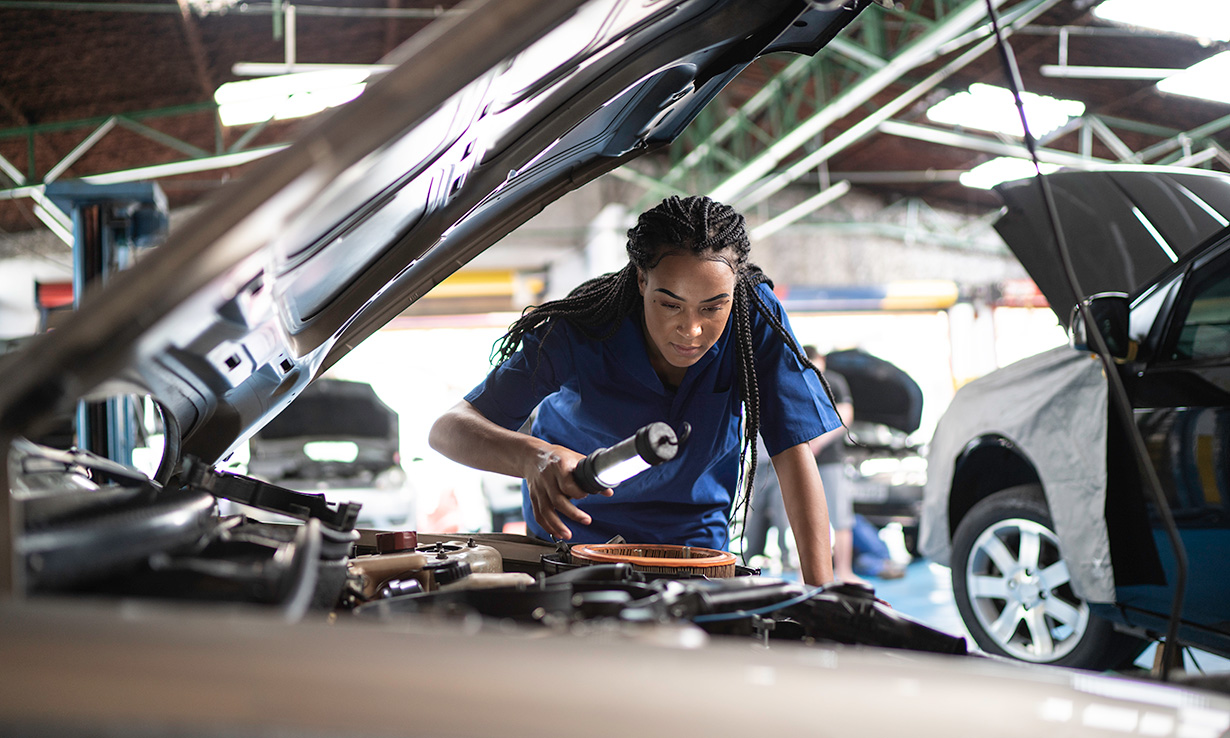 In our table below, we’ve compared the most affordable vehicle cover plans from seven major breakdown providers*.

To see how these providers compare, we asked each company for a price that would cover a Peugeot 308 Sport.

For each provider, we’ve made a note of how much you’ll pay per year for basic cover, and whether that includes at-home assistance.

Only the RAC covers you at home with its lowest (Standard) tier of cover but, based on our scenario, it’s not the cheapest. All of the providers, with the exception of the AA, are still cheaper than the RAC’s basic policy even when you add in home cover. This is despite these companies increasing their costs by between 39 and 56%. 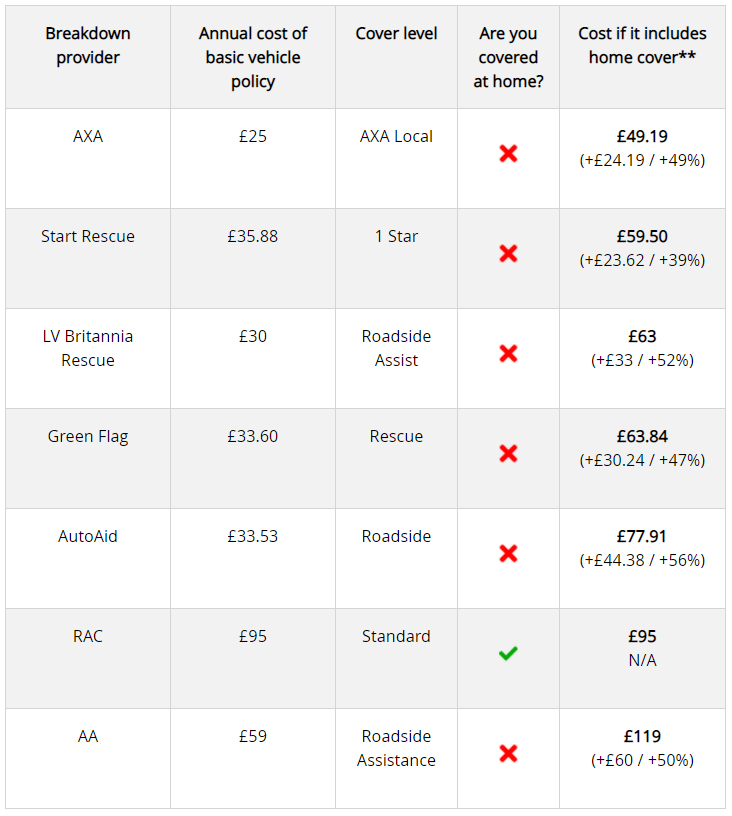 If your car gives up the ghost when you’re at home and you’re forced to upgrade from a basic policy to a plan that covers at-home breakdowns, you can expect your annual payment to leap up by 48% on average, based on our research.

The AA had the highest annual cost increase at £60, equivalent to a 50% increase.

AutoAid, AXA and Start Rescue will only cover you at home if you buy their highest tiers of cover that don’t include Europe. They also only accept annual payments – the other providers in our table can provide monthly plans.

Interestingly, the AA doesn’t charge for a call-out if you’re not a member, but you will have to sign up. A message on the group’s website explains: ‘We’ll provide instant cover for anyone broken down in the UK who’s not already with us. Just so you know, you can’t buy cover online if you’ve already broken down – so please call instead and we’ll help you.’

But remember, if you buy a reliable car in the first place, you’re less likely to have your breakdown provider on speed dial. To help you pick a car that won’t let you down, we’ve surveyed more than 47,000 motorists about their cars and what issues they’ve experienced.

Our research reveals the cars you can rely on – discover the most reliable cars. 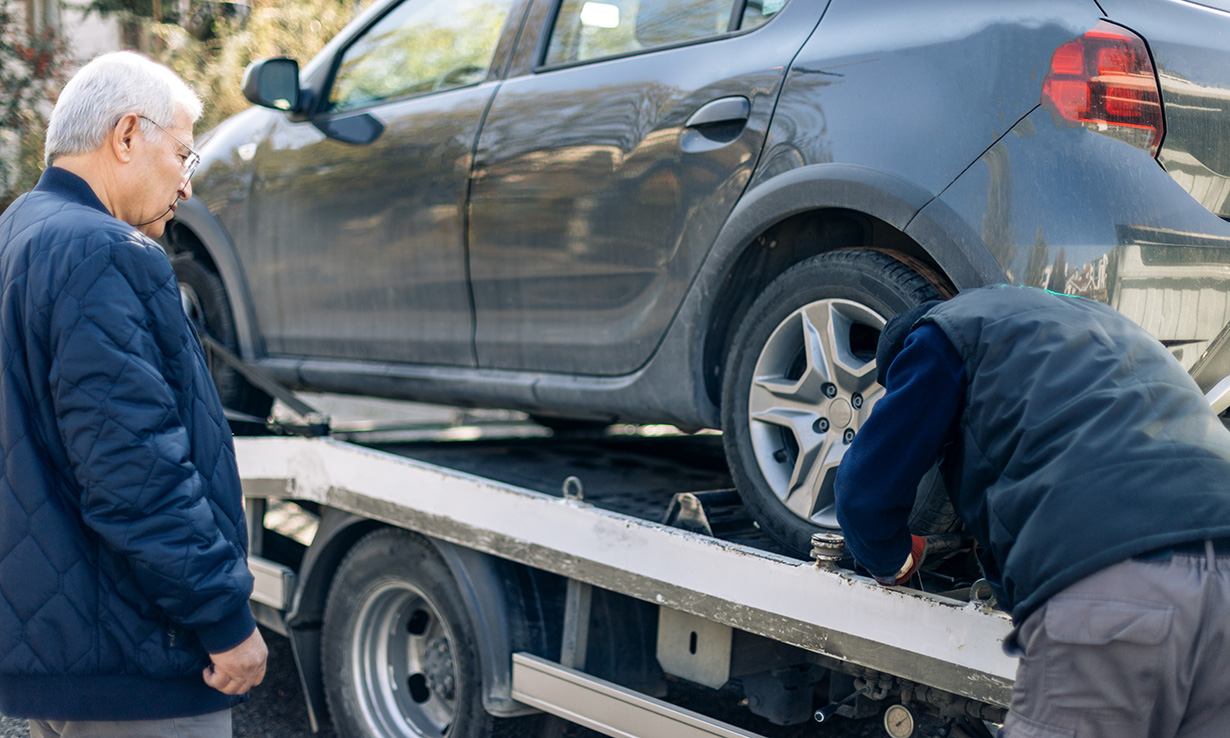 Which breakdown cover is best?

The best breakdown providers that we’ve seen will almost always reach your vehicle in under an hour, and their mechanics have the tools and know-how to get you back on the road.

We’ve surveyed breakdown cover customers so we can rate 23 companies. Find out which are good enough to be Which? Recommended Providers – see our best car breakdown providers.

Where is your car most likely to break down?

According to the results of our car survey, if you’re dealing with a breakdown there’s a high chance you’re at home. We saw that far more vehicle breakdowns take place at home compared to in town or in rural areas. 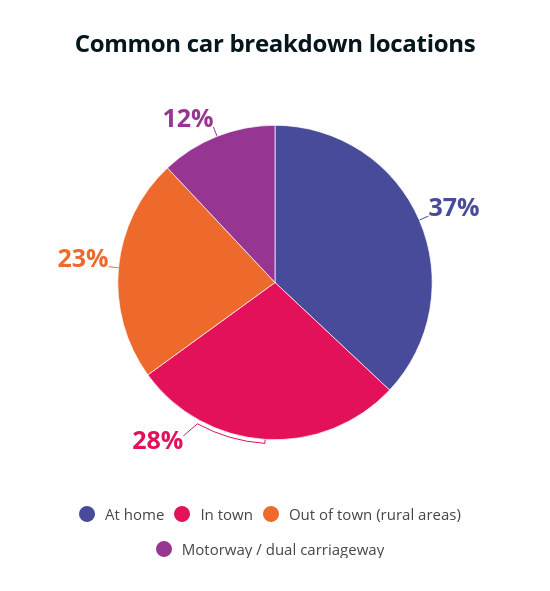 A flat or faulty battery was the most common issue – 34% of respondents said this was the reason for the breakdown. A puncture or flat tyre landed in second place, affecting 26% of respondents.

Considering it’s the most widely reported cause of a breakdown in our survey, you might want to learn more about how to jump start a car with a flat battery. Just follow our 10-step guide on how to jump start your car safely.

Which Car Survey research relating to breakdowns: online, December 2019 to February 2020; feedback gathered from 7,507 respondents, all of whom said they had called out a breakdown serice in the 12 months prior to answering the survey.