Masks, spaced-out queues, hand sanitising stations, floor signage. Shoppers have become accustomed to the new way of supermarket shopping during the pandemic. So what happens in England now that most lockdown restrictions have been lifted?

Since Monday 19 July, legal requirements for social distancing and wearing face coverings have been removed in England. Despite this, most supermarkets will be keeping safety precautions in place, with many still encouraging customers to wear face masks if they can.

Meanwhile, some stores have been experiencing disruption due to large numbers of staff being ‘pinged’ to self-isolate, as Covid-19 cases rise.

Here, Which? explains more about supermarkets’ plans in this new stage of the pandemic.

Which supermarkets will ask customers to wear masks?

Alhough you legally no longer have to wear a face mask when shopping in England, it’s worth noting two things:

The government’s expectation may not be unfounded, as an Office for National Statistics poll found that 64% of adults planned to keep wearing masks in shops and on public transport after 19 July.

As for what supermarkets themselves are saying, the wording differs slightly from chain to chain, but the majority are encouraging customers and staff to keep wearing masks in stores, in line with the government’s recommendation.

Here’s what each supermarket is doing: 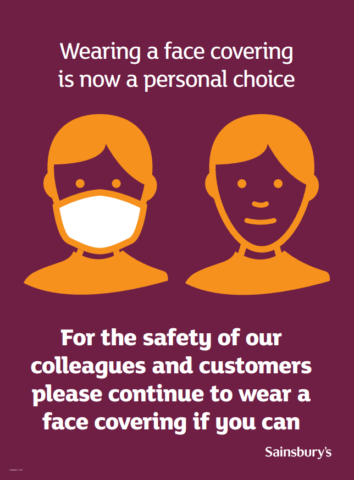 Masks aside, you can expect supermarkets to keep the Perspex checkout dividers and hand sanitiser stations that have become a staple of pandemic shopping for the time being.

Staff shortages due to widespread self-isolation

In other supermarket news, spiralling cases have led to frontline retail and hospitality staff being ‘pinged’ by the NHS app and told to self-isolate in huge numbers. The resulting staff shortages have forced some stores to close their doors.

Iceland chief executive, Richard Walker, told the BBC that 4% of the chain’s 30,000 employees – equating to more than 1,000 members of staff – are now absent. As a result, Iceland has had to close some stores and reduce opening hours at others.

Walker told the BBC that he’s concerned that things ‘could get a lot worse a lot quicker’ in light of the virus’ spread.

Marks & Spencer chief executive, Steve Rowe, told the Times last week: ‘It’s a major issue across every industry at the moment. Covid cases are roughly doubling every week and we’re seeing about three “pings” for every case of Covid, so it’s growing exponentially.

‘If there are shortages, we’ll have to manage it by changing hours of stores, reducing hours. Where the industry will see the pain is in the supply chain, because logistics runs tight anyway to be efficient.’

The British Retail Consortium (BRC) has called for the government to bring forward a planned change to the rules that would allow people who are fully vaccinated or with negative tests to avoid self-isolation from 16 August.

Asda told Which? that it isn’t currently seeing issues and stores are operating as usual, but it does back the BRC’s call.

Covid isn’t the only cause of headaches for supermarkets at the moment. Three stock-picking robots collided and caught fire at Ocado’s south-east London fulfilment centre on Friday, causing the online grocer to cancel thousands of orders.

Around 800 staff were evacuated and 100 firefighters worked to contain the blaze, according to The Grocer.

Ocado said that no staff had been injured in the incident and thanked affected customers for their patience.