When all around it are launching OLED TVs for well over £1,000 or even £2,000, Philips has gone and released an OLED so cheap we thought we’d reviewed a 2020 TV by mistake.

It’s implausibly cheap. The question of course, with the OLED being a third or even half as cheap as its competitors, is whether it’s a third or half as good.

The lowdown on the Philips OLED705/12 range

Unlike LG and Sony, Philips doesn’t go in for many enormous OLED TVs. Only its more expensive OLED806 range has anything bigger than 65 inches.

So what do you get for your £979 (or £1,399, if you want the bigger screen)? It may surprise you to find you’re getting the majority of features we’ve come to expect from a high-end TV.

Obviously, OLEDs don’t have backlights – each pixel in the display creates its own light instead. That means there’s millions of light sources making the picture, so you can expect better contrast and more control over what areas of the screen are lit.

You’re getting the basic formats (HDR10 and HLG) but you have Dolby Vision and HDR10+, too. They can adjust contrast to suit each scene, so HDR scenes shouldn’t appear overly dark or bright.

By supporting both advanced formats it guarantees you’ll see the benefits on more streaming services, since some use one one rather than both.

Find out more about these formats in our HDR TV guide. 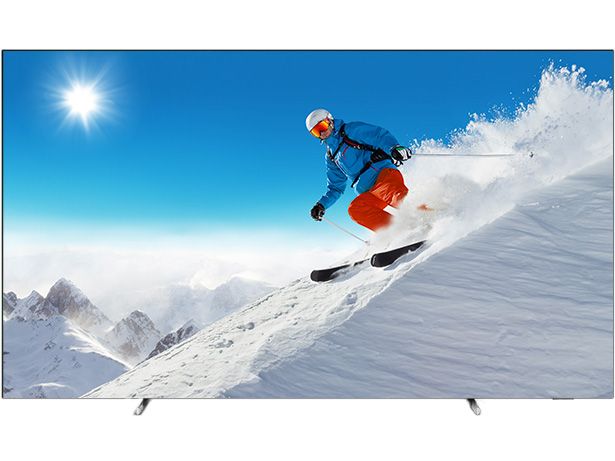 Four HDMI inputs and three USB ports. There’s no HDMI eARC though. This input supports the latest audio and video signals for a better overall experience. You do get HDMI ARC, which works in a similar way, but supports fewer signals.

These are becoming more common, but screens that can display up to 120 frames of content per second are still the reserve of high-end TVs. 120Hz displays are great for gamers who want to make the most of their PlayStation 5 or Xbox Series X/S by playing games at 120 frames per second. This makes the action look smooth as silk.

How does the Philips OLED705/12 range compare with pricier OLED TVs?

Or, to put it another way, why is it so cheap?

There are a few ways that Philips has managed to keep costs down, but the good news is they aren’t exactly vital.

Even the inputs on TVs get updates, because of course they do. HDMI 2.1 is the latest version, but these Philips OLEDs have HDMI 2.0. That means that you can only play 120Hz games in HD rather than 4K.

You lose dynamic HDR, too, which helps the TV take better advantage of HDR content and enhance the picture even further.

No software for gamers

VRR (variable refresh rate) allows the TV to compensate if the console you’re playing the game from is struggling to display all the frames it should each second. This is called frame drops and can result in stuttering. With VRR, the TV can fill in those blanks and make your game look stable. It’s not present here though.

There’s no FreeSync or G-Sync either. These were developed by AMD and Nvidia respectively and both are bundles of software that improve how games look on your TV. They have VRR features and can reduce screen-tearing and input lag.

Definitely need these features? Use our expert television reviews to find the right model for your budget.

We’re used to banging on about 4K when we talk about a TV. There are so many pixels to use at this resolution that most TVs can’t help but look crisp.

It was the HD picture that left a lasting impression here though. It’s sharper than almost any other TV we’ve tested in the last few years. That’s the upscaling in action as it takes lower resolution content and makes little adjustments to add detail. It’s like taking a loose bit of string and pulling it taut as the myriad lines that make up each scene become sharper and better realised.

We’re also a fan of Google’s Android TV software that handles that smart portion of proceedings, such as downloading apps. The other TV menus, designed by Philips, are vastly inferior. As is the remote (more on those in our full review – scroll down).

Of course, HD is only one portion of a TV’s quality. To challenge the more expensive OLEDs from more well known brands it will need to sound good, make good use of all those HDR formats – having the likes of HDR10+ and Dolby Vision is by no means a guarantee.

Are its rivals better?

You can use the links below to see how its rivals compare: