Pizza Hut’s ‘DealBot’ greets customers who visit its website to order a takeaway, promising to save them money. But it’s cutesy appearance masks a dark secret.

It says it’ll automatically find the ‘best deals’ on whatever is in your basket, saving you from searching through the long list of offers on Pizza Hut’s website yourself.

But analysis of more than 70 Pizza Hut orders found DealBot frequently failed to find the best discounts available, with better offers present on the website’s own ‘Deals’ page.

Here, we look at how DealBot is regularly missing the best deals, and share a better way for you to find the best discounts.

What is DealBot and how is it meant to work?

When a customer goes to place an order on Pizza Hut’s takeaway website, the peppy DealBot pops up like this: 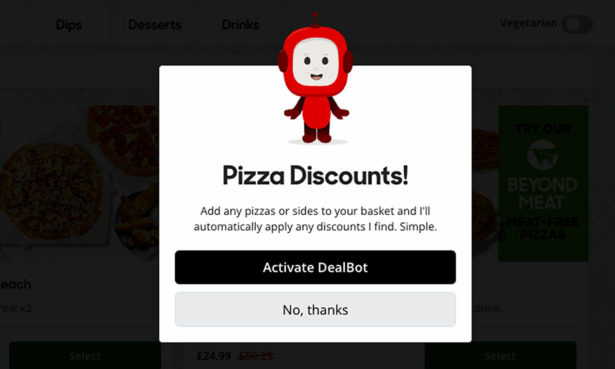 The idea is you can ‘Activate DealBot’ and forget about looking for discounts yourself.

The other way to access Pizza Hut’s offers is on its ‘Deals’ page. You can browse the list of deals, select one, choose which items you want to order as part of that deal, and add it to your basket.

Here’s what you see if you choose to order ‘The 35 Deal’: 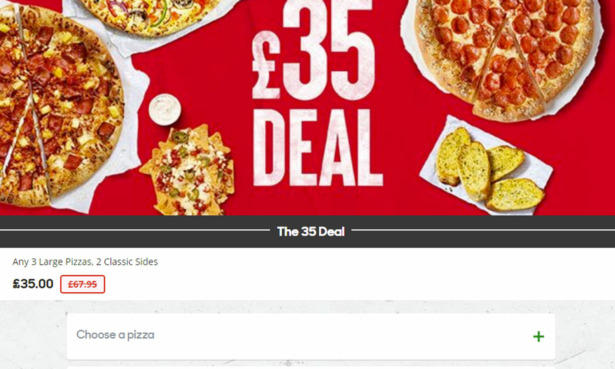 If you have DealBot switched off, and you don’t order via the Deals page, you will receive no discount at all.

Initially DealBot says it will let you know about any discounts it finds, not necessarily the best discounts.

But, once you activate DealBot, a message in your empty basket says: ‘Your basket looks a little empty. Just start adding food and DealBot will automatically find you the best deal!’ [Emphasis ours.]

You could be forgiven for thinking DealBot is capable of finding discounts as big, or even bigger, than those on the ‘Deals’ page. But our research has found it isn’t.

DealBot isn’t completely useless. If you place an order that doesn’t fit any of Pizza Hut’s prescribed deals, it will usually still save you money. But it’s missing major deals it should find, based on its claim to find the best of the best.

We first put DealBot to the test on 10 June and it didn’t find any of the deals listed on Pizza Hut’s ‘Deals’ page at the time.

We placed an order with DealBot switched on for a Medium BBQ Meat Feast, Italian Style Cheese & Tomato Bits and Robinsons Refresh’d Apple & Raspberry 500ml, and it came to a total of £24.67. Equating to no discount at all. 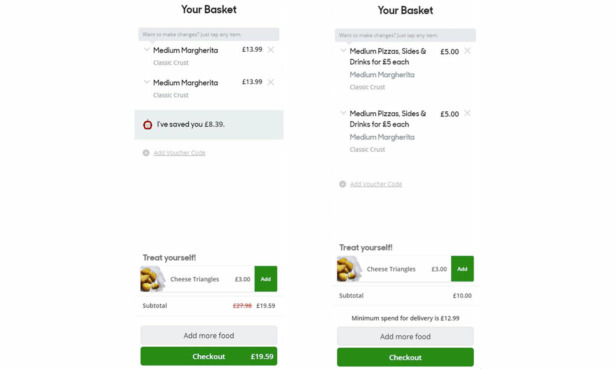 Here are some of the deals that had the biggest differences in discount:

DealBot’s initial message says it finds discounts on pizzas and sides, but some of the special offers we’ve looked at do include drinks and desserts.

About half of the deals we looked at didn’t, however, and DealBot still failed to match these.

Even in the cases where drinks and desserts were included, DealBot sometimes fell short by an amount higher than the cost of a Pepsi or ice cream. In the ‘£13.49 Individual Deal’ example above, for instance, adding a drink to your order saves you £11.98.

In total, we found seven orders for which deals were available, where DealBot offered no discount whatsoever. Though only two of these didn’t include drinks or desserts.

We made the same orders again on 23 July and found that DealBot had slightly improved.

This time, there were three instances where DealBot offered a better discount than the equivalent Deals page deal, though overall the Deals page was still better value 17 times out of 20.

When we tried again on 29 July, some of the deals and the menu had changed, so we had to substitute some items for others.

We found once again discounts on the Deals page were better than DealBot’s findings every single time for the qualifying orders we checked.

While DealBot is sometimes capable of finding the best deals, there are often better discounts on the Deals page. And if you trust DealBot to find the best deals, you may not browse the website to check for better offers and lose out.

How do I find the best Pizza Hut deals?

Visiting the ‘Deals’ page is the best way to find discounts on Pizza Hut’s website. You’ll be greeted by a long list of special offers you can click to activate, taking you to a screen that asks which items you’d like to order as part of the deal. 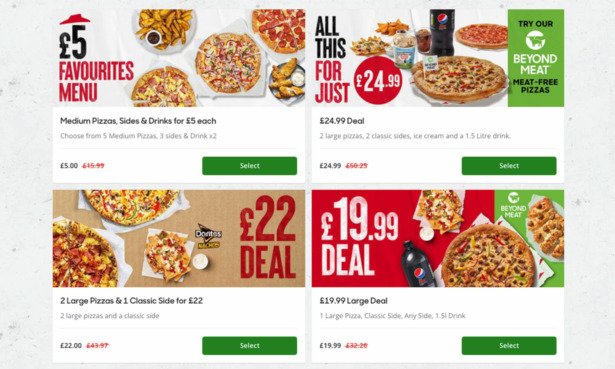 In most cases you’ll need to order a fairly specific mixture of pizzas, sides and drinks. If any of these combos take your fancy, it’s best to place your order this way instead of trusting DealBot to apply the same discount automatically in your basket.

When we asked Pizza Hut why DealBot was unable to find certain discounts, it said:

‘DealBot’s intention is to provide good deals quickly to customers that don’t want to spend time hunting around the website.

‘Once activated, the optional tool automatically applies discounts based off basket value thresholds and buy one get one free offers.

‘We are looking into ways of developing the technology on our website to meet the needs of our consumers and ensure they really do get the best deals, which includes improving the functionality of this particular system.’

Unless we do see an improvement in DealBot’s wiring, there’s a risk customers could continue to lose out on possible savings because Pizza Hut claims its DealBot finds the ‘best’ deals when it doesn’t actually look for all of them.

Find out more: your delivery rights