Electric heaters can be surprisingly hard to come by during autumn and winter, though, with many going out of stock. So you might find it hard to track down a particular heater that you’re after.

Find out how much portable heaters typically cost and what you can expect from a cheap one, and see our round-up of the cheap electric heaters available now.

Most electric heaters are fairly cheap. Some are more expensive because they have extra features like air purification. But few cost more than £150, and many cost as little as £20.

One important caveat, though – use your portable heater too often and the running costs might well send a shiver down your spine.

The cheapest electric heaters we’ve tested all have thermostats which detect the ambient temperature and adjust the heater’s output according to your preferred setting. They usually have adjustable energy settings and timers so you can turn the heat down if you want to, or limit your heater’s running time.

Are cheap electric heaters less good than expensive ones?

Plenty of cheap electric heaters are quite poor, and three of those we’ve made Don’t Buys were under £40 when they flunked our tests. If you’re buying a heater that you haven’t researched, you’re much more likely to buy a dreadful one if you’re looking for the very cheapest.

That said, one Don’t Buy costs as much as £100. And a number of our Best Buys electric heaters are available for under £100, including a few under £50.

A couple of other cheapish models aren’t quite good enough to earn our Best Buy recommendation, but will still do you a decent job.

So, you do need to choose wisely: our electric heater reviews sort the wheat from the chaff for you.

Fan heaters generate heat and blow it around the room. They work much more quickly than other types of heater; we’ve found that convector heaters and oil radiators can take half an hour to raise a room’s temperature significantly, but fan heaters can do this in half the time.

While not all fan heaters are cheap, most cheap electric heaters tend to be fans with a small horizontal grille. They sit on a desk or sideboard and push air out of a small outlet that gets very hot.

Cheap fan heaters don’t oscillate, so you’ll need to point your heater in your general direction.

They’re not great at distributing heat evenly, either, and will create hotspots in your room according to the way they’re facing. 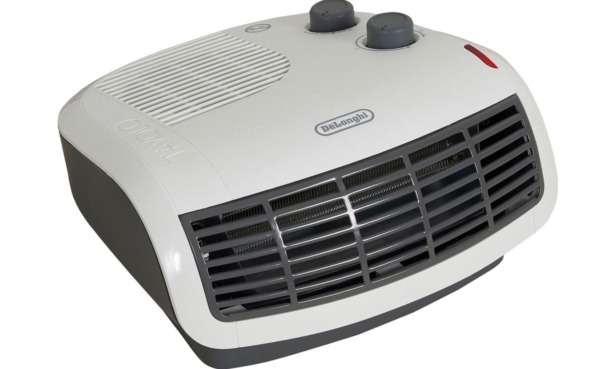 The joy of this model is its simplicity. It’s 1.6kg and operated by a couple of dials protruding from the top. You can plonk it down and let it get to work with minimal fuss.

Just watch out – at its highest setting it runs at 2.5kW. That’s a lot of energy for a little heater. 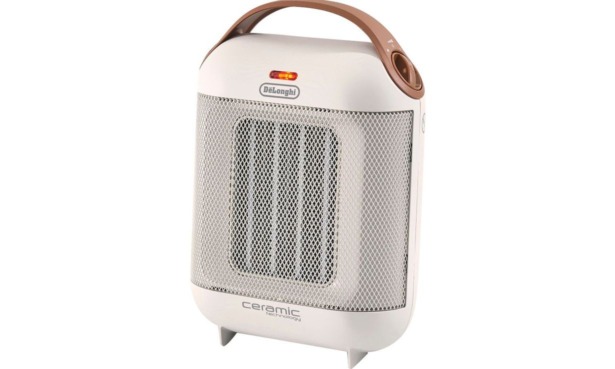 This heater has a handle to make it easier to carry around. It has two heat settings so you can toggle between 1.8kW and 0.9 kW – you’ll want the former to heat your room quickly, but the second can be a good choice to taper off with after the room’s heated, or if you only need a small heat boost.

It also doubles up as a fan, in which mode it just blows air around the room without generating any heat. That could be handy if you’re looking for a way to stay cool in summer as well as warm in winter without shelling out for a separate electric fan or air conditioner.

Note that we haven’t tested it as an electric fan or an air conditioner, though. So we can’t tell you how it performs in these modes, though we can tell you with certainty whether or not it impressed us as a heater. Check out our Best Buy electric fans and Best Buy air conditioners for one you can be certain does the job. 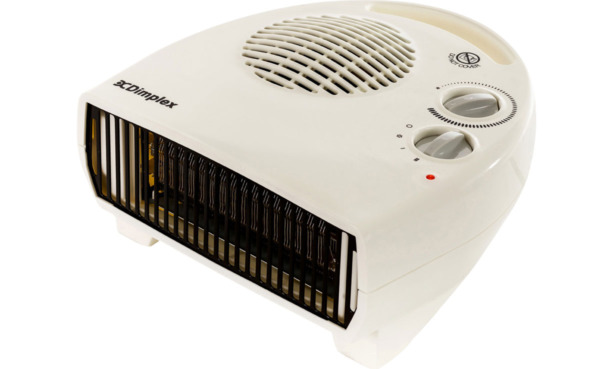 The heater was launched nearly a decade ago, but the way fan heaters work hasn’t changed much over the last ten years. If you put this small (25 x 12 x 35cm HxWxD) heater on your desk or on a cabinet, it’ll push heat out of its grille to get you toasty.

Like a few fan heaters, it’s rated at 3kW, so your energy costs could quickly escalate.

It also doesn’t rotate, so heat will be most intense directly in front of the heater, particularly when it’s just been turned on and the room hasn’t filled with hot air yet.

If you want something ultra compact and basic, it’s worth a look.

Like fan heaters, these heat by convection, meaning they heat up the air in your room. Convector heaters have an exposed heating element which warms up cold air that passes through. Radiators heat with a mix of air convection and thermal radiation: they heat objects and people directly.

These heater types can come very cheap, though availability has been lower so far this year. We’ve found that the average convector heater and radiator-type is a more mid-range price between £50 – £100.

These heaters tend to be slower but more thorough, managing to heat rooms evenly from corner to corner, floor to ceiling. It can be hard to find one of these heaters as cheap as a fan hater right now, with some of the cheapest costing as much as a mid-range fan heater. 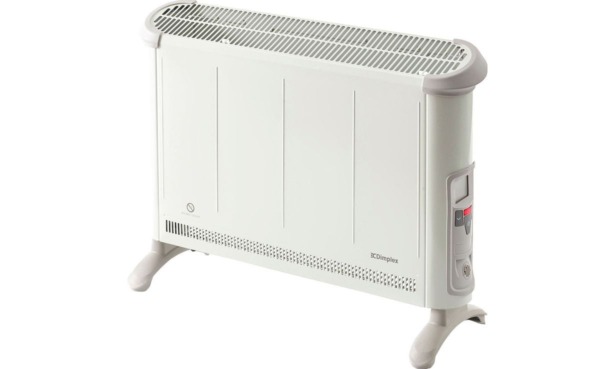 This freestanding heater can be placed on the floor or wall-mounted. We recommend placing it on the floor, as it works by warming up cold air that passes through its heating element. Hot air will rise from it, and cold air in the room will be pushed down.

We found it awkward to carry around, because it doesn’t have proper handles. On the other hand, a heater such as the Dimplex 402E is a better option than a fan heater if you’re working from home or if you need to stick it on of an evening when you’re watching the television or reading a book, because it works quietly.

It has three heat settings. 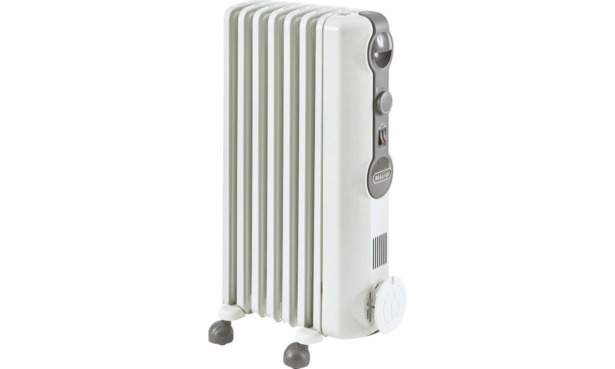 Oil radiators often don’t come cheap. Although, at £75, this is a mid-range heater, and it still represents a good price for what you’re getting.

It operates at a conservative 1.5kW and it has three different power settings. You’ll find cost savings in its design as an oil radiator: oil functions as a heat reservoir, and once heated, it will stay hot for a while even after it’s switched off.

Oil radiators are better value for money if you need longer heating, like if you’re staying put in an office or bedroom during an exceptionally cold day. With a reasonable amount of insulation in the room, their gentle heating covers the room nicely.

It’s also a good choice if you’re set on a radiator design which offers heat by convection and thermal radiation.

It comes with a five year guarantee too, which is generous compared to most. 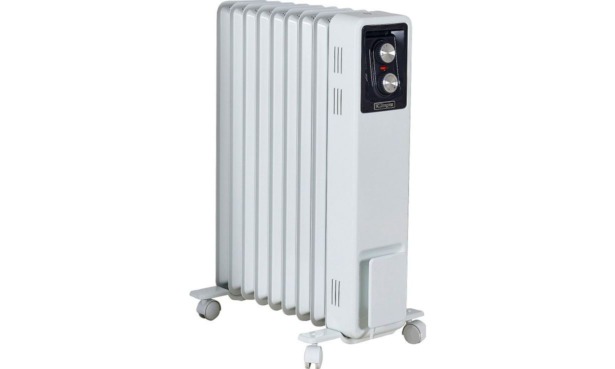 At nearly £100, the Dimplex ECR20 just about makes it into this under-£100 list. But it’s worth looking at if you’re willing to spend a little more initially for a heater you’ll use for years.

As an oil-free radiator, it’s similar to the TRRS0715. It doesn’t have oil, but rather it relies on a heating element, but it’s still a radiator with conducting fins that transfer warmth from the heater and to the air and solid objects in close proximity.

As it dispenses with oil, it doesn’t have the same heat retention after switch-off as an oil radiator would. However, it’s also faster because it doesn’t need to wait for oil to heat up. It can be modulated between 0.6kW, 1.4kW and 2kW outputs.

Don’t fall for a false economy

As we said before, don’t use use portable electric heaters to heat your entire home. Use an electric heater in short bursts, as a top-up or a fallback option.

It’s also important to buy a heater that’s proven to work effectively. Thermostats vary in quality – some work terribly, leaving a heater unable to adjust itself to the ambient temperature and spewing heat out endlessly.

Others are sensitive and adaptive, adjusting the heater’s output and bringing its heat generation down if the air temperature is high. So a low-quality heater, whether cheap or expensive, will have a high long-term cost.

Make sure that a portable heater is the heating solution you really need. They will never be as cost-effective as, for example, a storage heater that uses off-peak electricity rates, or a gas boiler that costs a fraction of the price per hour.