The Sky Glass is something new. A TV that includes everything you need to watch Sky TV, but with no extra boxes – just wi-fi.

The Sky Box, which is normally a separate unit connected to the TV via HDMI, is now built-in. So you just need to plug the TV in, connect it to the internet and turn it on.

It’s an interesting idea and that simplifies how people access content on Sky. Read on to find out more, including how the Sky Glass cost compares to a conventional TV, how the subscription works and whether the TV’s features mean it’s worth buying.

See our TV reviews – we test hundreds of TVs each year in our independent lab, so you can trust we know the best models

How much will the Sky Glass TV cost and when is it available?

You don’t buy a Sky Glass TV the way you would any other set. You’re buying a Sky subscription and a TV at the same time and paying for it every month.

It’s like buying a phone: part of your monthly fee is paying off the phone and the rest of the money goes on minutes and data, except here you’re paying off a TV and access to the content.

How much you pay depends on how big a TV and what Sky package you want:

You also have to get a Sky subscription and you have three to choose from:

It’s worth noting that you’re getting the most basic SD version of Netflix. You need to pay more for the HD or 4K version.

How much more expensive is a Sky Glass TV compared to a conventional TV?

Most people buy TVs outright and are then free to choose whatever TV package they want, if any. You can pay for the Sky Glass TV upfront, if you don’t want to add to your monthly costs.

If we take the cost of the Sky subscription away, how much more expensive is a Sky Glass TV compared to a Samsung model of a similar size and spec?

(Since the Sky Glass TVs have quantum dot displays, advanced HDR formats and surround-sound audio processing, we’ve compared them to the Samsung Q60A range which has broadly the same features.)

There’s also an option to pay over 24 months. However you buy the TV, you always need to take out a Sky subscription at the same time.

You don’t need to spend loads to get a great TV. Our tough tests reveal the best cheap TVs.

How will the Sky Glass subscription work?

The TV subscription portion of the monthly payment is a rolling contract, so you can make changes or cancel it each month.

Since the TV has an aerial input, you can connect it to one and watch Freeview channels. It doesn’t have a dedicated app store, however. This means you won’t be able to download any more than the 21 built-in, which include: Netflix, ITV Hub, BBC iPlayer, Disney+, YouTube, Spotify, BBC Sounds and Peloton.

Sky said its Glass TVs are the first TVs to be certified as a CarbonNeutral® product by Natural Capital Partners.

The energy rating is similar to the majority of models we’ve tested in 2021. The 43-inch model has a G energy rating, the 55-incher has an F energy rating and the 65-inch set is rated E. Since The Glass includes a sound bar and a Sky Q box, it does cut down on energy use versus having all of those products running separately as well as your TV.

Sky has said it plans to offer an exchange service after the contract ends so users can upgrade to a new TV, but this isn’t necessary. Our research shows that people keep TVs far longer than that, up to a decade in some cases.

Despite new TVs launching annually, the technology moves fairly slowly with relatively minor updates coming to new models each year. A new TV bought today would likely have all the features and tech required to watch 4K HDR content in four years’ time and would still do that content justice.

What features and tech does the Sky Glass range have? 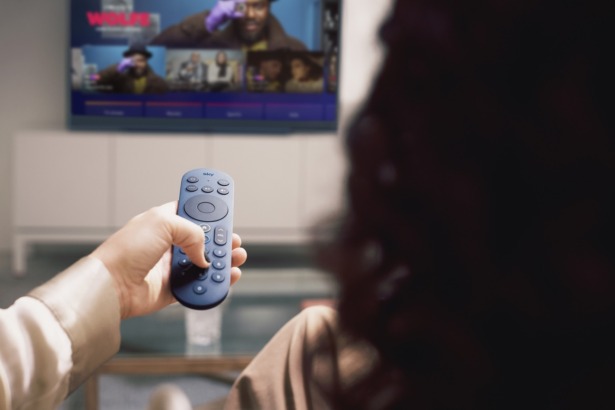 This isn’t some basic TV that Sky is trotting out. It has advanced features and an impressive (on paper) built-in speaker array. The display itself is quantum dot. That means it’s still an LCD TV with a backlight, but as well as liquid crystals there’s a layer of quantum dots designed to improve colour vibrancy.

It supports Dolby Vision HDR, which is an advanced format capable of adjusting contrast to suit each scene. It also has Dolby Atmos sound processing to make the most of six speakers. It can send sound over your head to create a better sense of spatial and surround sound. The two upward-firing speakers should do a good job of that.

There are three HDMI inputs too, so you can add games consoles and a Blu-ray player if you want to.

You can control some aspects of the TV with your voice, too, so it really is comparable to a mid-range TV from the likes of LG or Samsung. Unlike many TVs, the microphone is built into the TV itself rather than the remote.

One big issue of having the TV come through wi-fi is what happens when the internet goes down and how well it will work if you have a sketchy connection. Sky’s website says you need 10Mbps per second for HD streaming and 25Mbps for 4K.

You may need an aerial on hand to access broadcast TV if your internet is particularly slow or prone to dropouts.