Firms mis-selling appliance cover or other household services, and setting up expensive ‘stealth’ direct debits that remain under the radar for years, are continuing to con vulnerable victims into paying out thousands.

When Fran Short visited her 92-year-old grandmother, Mary, she found an unusual letter which led to a shocking discovery. Mary was being charged £30.99 a month for boiler breakdown cover – even though Fran knew her gran already had boiler cover with her energy supplier.

Fran told Which?: ‘I couldn’t find a website or contact details for the company, but there were lots of complaints about it online.

‘The letter was dated two months earlier, so I went through gran’s bank statements to check how much she’d paid. I found dozens of recurring charges by similar-sounding household “insurance” and “cover” companies’.

Despite having a call-blocking service with her phone provider, it turned out Mary had been hounded by cold callers telling her she needed to renew various policies she didn’t have. Believing their lies, Mary had repeatedly given out her bank details.

Over a two-year period, Mary had paid out £10,000 to multiple firms claiming to be providing breakdown cover for her washing machine and boiler – as well as a dishwasher she doesn’t even own.

Here, Which? explains the growing issue of direct debit traps targeting the vulnerable and what you can do if you or someone you know has been affected.

Almost one in four targeted

Direct debit is a trusted way to pay for bills, subscriptions and ongoing services. According to UK Finance, the trade body representing banks, nine out of 10 of us use direct debits to pay bills. But we found that unscrupulous companies are using it as a stealthy way to get people to part with their money without realising.

Schemes such as those Mary fell foul of have been doing the rounds for years and don’t seem to be going away. They often target the elderly and vulnerable, but cold callers can trick anyone into handing over their bank details, using manipulation, deception and aggressive sales tactics.

Almost a quarter of 1,394 Which? members we surveyed in September 2021 told us they or a friend or relative has received a call like this in the past year. We’ve heard reports of callers lying to victims, telling them their existing cover is expiring, even though they don’t have a policy, or claiming to be another well-known company.

With the appliance cover ruse, they often impersonate Domestic & General – a large, legitimate provider of such cover.

Callers usually have access to personal information that makes their targets believe the calls are genuine. They work by pressure-selling invisible and easily forgotten products that require a regular monthly charge. Then they sit back and hope the odd £10 or £20 leaving their victim’s account month after month won’t be noticed.

‘These companies go after the vulnerable’

Chris said his father was called with ‘good news’ that his appliance insurance premium would be less this year.

The caller claimed to be from a firm called ‘Utilities UK’. Chris said his father had a plan covering his white goods, and as the caller knew his name and details, he assumed it was the same firm.

Chris’s father, 79, is a full-time carer for his wife who suffers from late-stage dementia. He’s exhausted and easily worried. Shortly after the call, he got a letter saying a direct debit had been set up in his bank account to ‘Home Utility Services Ltd’.

The payment was processed by third-party payment provider Interbacs. Chris was able to get the payments cancelled and reported to the firm. ‘After doing a lot of research online, I believe these companies are going after vulnerable people. Realising he’d been conned and having to keep calling banks for help, and asking me for help, caused Dad added stress he didn’t need.’

Shortly after they thought the problem was resolved, Chris realised another firm had wormed its way into his dad’s account and he spent more time pursuing refunds. Chris told us that he’s shocked by the ease at which these companies were able to set up regular payments without checks.

He has since bought his dad a call-blocking device, which he hopes will put a stop to the calls. We asked Home Utility Services Ltd for comment, but it didn’t reply.

Easy way to pay – and get paid?

It appears to be easy for these companies to set up recurring payments with just a bank account number and sort code.

Anyone wanting to start collecting payments using direct debits can do so using a third-party payment processing firm. To be a customer you only need to pass some basic credit and background checks and have registered your business with Companies House.

You’ll then be able to set up payments using dozens of people’s bank details. Interbacs is one of the third-party payment companies we have seen unscrupulous firms using to process direct debits. It’s also one of the largest.

Interbacs said it’s an industry leader in safeguarding and due diligence, and recognised as such by regulatory bodies like BACS and the Financial Conduct Authority (FCA). It said it works closely with National Trading Standards and with Pay.UK, the industry regulator, to tighten up measures in this area.

The Payment Systems Regulator (PSR), the payments watchdog in the UK, told us it considers all types of payment fraud a concern. It says it’s worked with Pay.UK, the body that runs the UK’s payment systems, in recent years to tighten up rules in relation to direct debit facilities management providers, resulting in Pay.UK introducing a new accreditation regime for these firms.

What we know about the rogue companies

Fran shared details of 25 firms that either charged Mary monthly or repeatedly pestered her with nuisance calls. They claimed to be offering all sorts of services, including cover for blocked drains and loyalty schemes, but the company websites use templates and all look strikingly alike.

Curiously, many of the firms are based in or linked to the south coast of England – Bournemouth and Poole. The directors are based locally, too. Companies House records show these firms often operate for a short time then change their trading name, or dissolve and set up a similar business with a similar name.

Many have links to marketing companies specialising in selling data and ‘hotkey leads’, which is marketing speak for people who fit certain customer criteria. For example, people who are known owners of household appliances.

Callers tend to use one company name on the phone, while another appears on bank statements – so it’s impossible to tell who is calling.

Some of the Bournemouth-linked companies that targeted Mary crop up time and time again in reports to us for allegedly cold calling and misleading people into handing over their bank details. They include KG Assist, which is linked to Home Utility Services Ltd, and Appliance Cover UK (now dissolved) through its former directors, who also have links to telemarketing firms that say they specialise in data leads.

We also had reports about Supercardblack.com (which also appeared on Mary’s bank statements), a site that says it’s a rewards membership scheme. Supercard Black said it takes customer satisfaction seriously and will investigate.

Others told us they believe they were charged £200 and recurring fees after being tricked into handing over bank details on the phone under the guise of renewing insurance products or being a winner of the Postcode Lottery. The Postcode Lottery said it has no links to the firm.

Why are cold calls still a problem?

There are two main issues. One is that telemarketing companies are freely selling sensitive data, and the companies buying it are abusing it.

The Information Commissioner’s Office (ICO) to tackle companies making sales calls without permission to use the data, particularly those calling people who have registered with the Telephone Preference Service (TPS) to opt out of unsolicited calls.

Earlier this year, a firm Which? had previously investigated, Repair and Assure, was fined £180,000 by the ICO for breaching rules on contacting people registered with the TPS.

But the ICO only has powers to disrupt these companies by fining them for breaches, rather than prosecuting them. It passes the information on to intelligence agencies and the Insolvency Service, which has powers to ban directors from setting up new businesses if they’re found to be unscrupulous. Since the authorities have cracked down, some have started to venture into other industries such as energy-saving devices and services directly targeting the elderly, including personal alarms.

One company we’ve received reports about for mis-selling appliance cover to vulnerable people has recently launched another business selling personal emergency alarms, aimed at the elderly. It’s selling its services for almost double the cost of how much you’d usually expect to pay for one of these systems, and claims it provides a ‘personal direct line’ to the emergency services. But this kind of service isn’t possible – it’s likely it just calls 999 using an existing landline.

Direct debit traps are online too

Cold calls aren’t the only way to fall into a direct debit trap. People are also being targeted on online platforms, such as search engines and social media sites, where it’s easy to set up advertising and pick exactly who you want to target using the vast amounts of data these sites offer advertisers.

Often it’s not made clear it’s a subscription service being advertised, but some people have signed up for services they’ve never received.

Siobhán Noonan thought she was buying a £5 sample of ‘Instagram trending’ health supplements advertised in her Facebook feed (see picture below). She received the trial product, but the firm, Provexum, used her details to set up £19.99 monthly payments for which she got nothing. ‘I only realised after two months because I don’t often use the credit card I used to pay with.’ 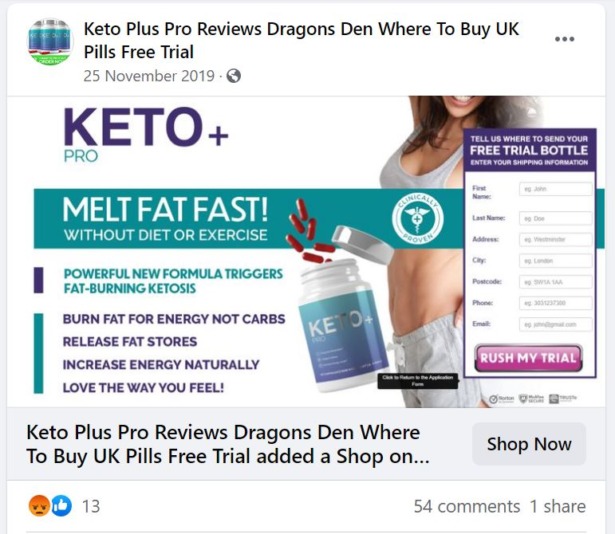 It took three months to get a refund from her card provider and she had to show evidence she didn’t sign up for a subscription. Provexum did not comment, but Facebook has removed the ad and the company’s page.

Telltale signs of dodgy ads include cheap trials or samples, vague contact details, unrealistic claims, claims the products have been endorsed by celebrities, and cheap-looking graphics. Which? is campaigning for social media companies to do more to spot these patterns, and block misleading and scam ads from being posted.

If a direct debit has been set up without your permission, or you’ve been duped, you’re entitled to claim all your money back from your bank.

Some victims have quickly been refunded by the companies involved. It’s typically easier for the firms to refund than draw attention to their activities.

Our survey of 1,394 Which? members in September 2021 found that 79% knew they had a right to a refund in these circumstances. Most of those affected we hear from do get refunded, but it can be time consuming and a hassle.

The right to reimbursement also applies to historical charges over a long period, as in Mary’s case. If you run into problems claiming money back, make a formal complaint to your bank. You can escalate it to the Financial Ombudsman Service, if the bank still won’t refund you.

There are legitimate companies offering appliance breakdown and repairs cover. But Trading Standards says well-meaning companies rarely make unrequested sales calls or ask for bank details on the phone. It suggests keeping an eye on what’s regularly taken from your accounts, and doing the same for elderly friends and family.

The direct debit rules and the intervention of her granddaughter mean there’s good news for Mary. She has most of her money back and hopes to have it all by the end of the year.