If you’re starting to notice signs of mould at home, or you’re concerned about the prospect of mould developing, you should tackle the problem sooner rather than later. Our expert tips will help you keep your home fresh and clean.

Mould can lead to a host of health issues, particularly if you have respiratory problems, skin problems or a weakened immune system. Elderly people and children will also be more sensitive to the effects of mould.

There are plenty of things you can do to prevent mould from wreaking havoc in your home, though. Read on to find out more.

Condensation is a frequent cause of mould. Find out more about how to stop condensation.

1. Keep mould at bay with a Best Buy dehumidifier

Mould thrives on damp surfaces. A good dehumidifier will draw excess moisture from the air, preventing conditions that favour mould growth. A dehumidifier won’t banish existing mould (more on removing mould later) but it can stop it spreading or developing in the first place.

A refrigerant (or compressor) dehumidifier draws air through a filter and across cold coils. These models are better-suited to a heated room than a chilly room, as the air needs to be warmer than the cold surface inside the machine itself.

Place it in the centre of your home and keep internal doors open, so that it can draw air from all the rooms in which you generate moisture.

The larger your home, the more of you living there generating moisture through activities such as cooking, showering and boiling the kettle, the higher-capacity dehumidifier you’ll need.

Keep external doors and windows closed, so that the dehumidifier isn’t working harder than it needs to in attempting to dehumidify a larger area.

Your other option is a desiccant dehumidifier, which uses an adsorbent material to extract water from the air and prevent mould. If you’re shopping for a dehumidifier that can work effectively in lower temperatures, this is your best bet.

It’s important to choose the right type of dehumidifier. Then, once you’ve narrowed down your selection, make sure you buy one that impressed in our tests. Head over to our selection of Which? Best Buy dehumidifiers. 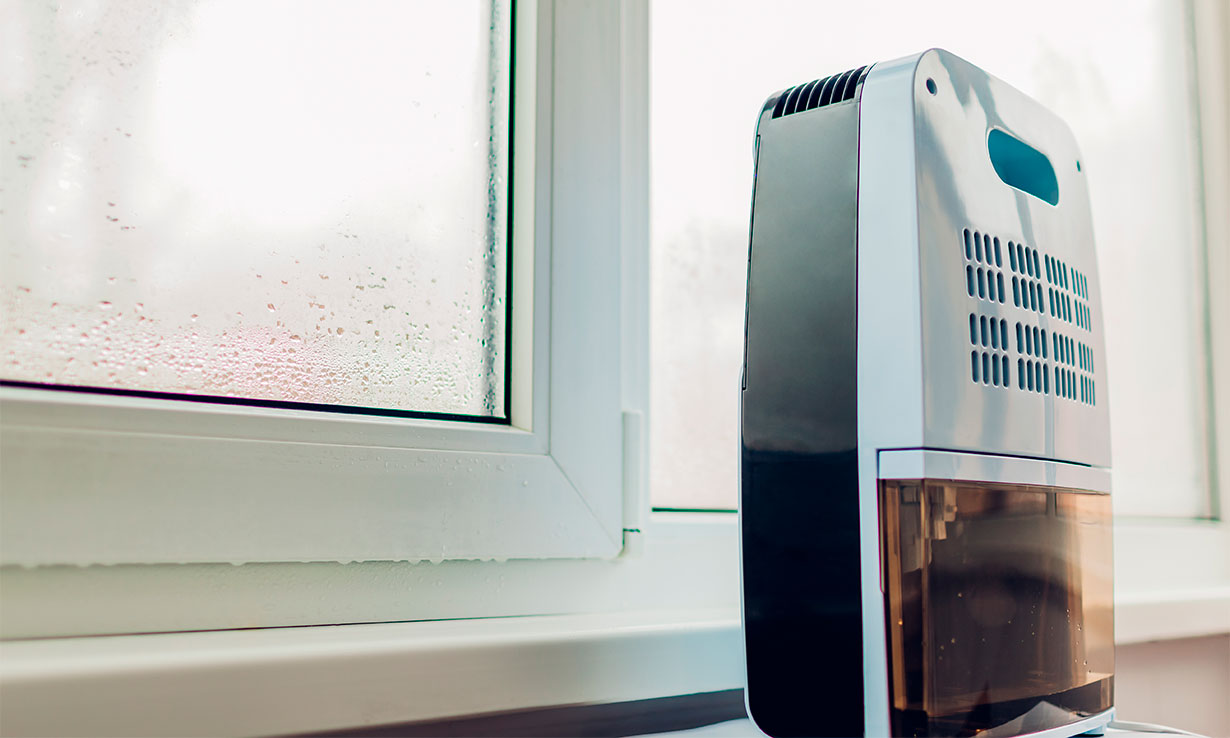 If your damp problem is severe, a dehumidifier might not be sufficiently powerful to get it under control, and you may need professional help. Start by pinpointing what type of damp is affecting your home.

Moist, warm conditions offer the perfect environment for mould to grow in. Leave window vents open and try to get into the habit of opening your windows every day.

If moisture can’t escape, it builds up in the air and makes itself comfortable on hard surfaces as condensation.

Make sure that any unused rooms in your home get a thorough airing from time to time. 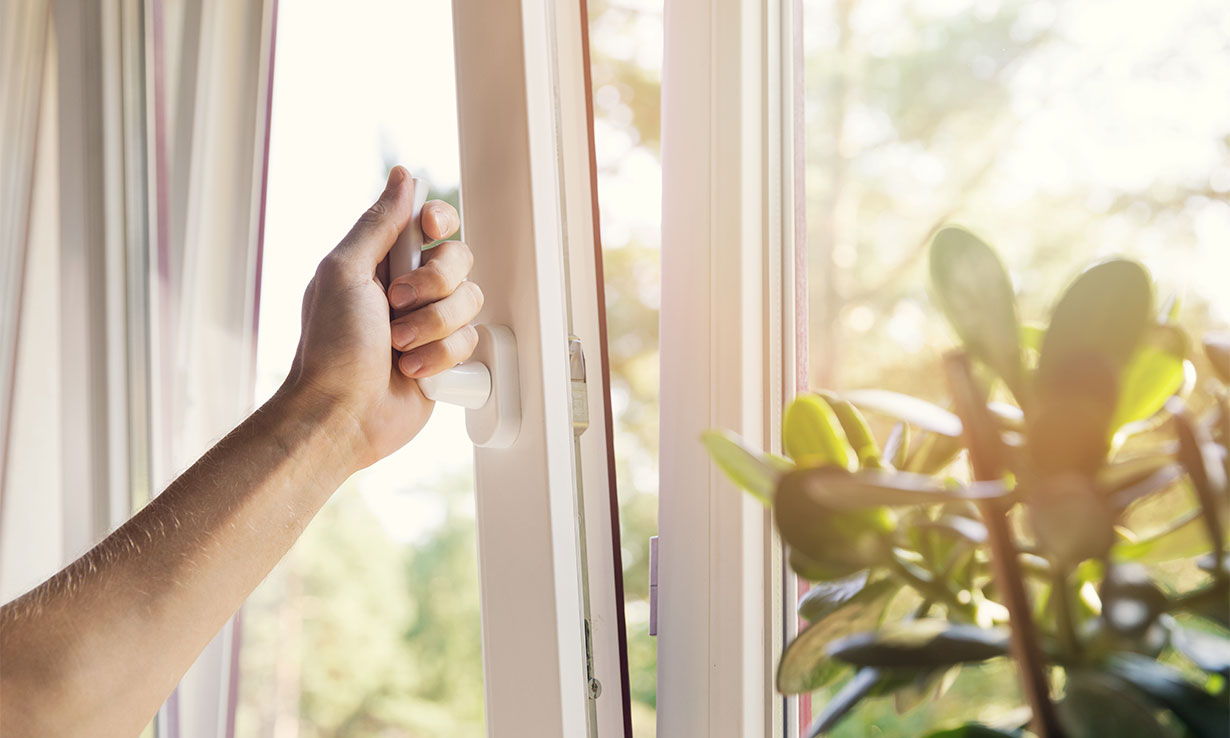 Avoid hanging wet washing indoors. This is because the moisture in the air will condense and stick to your walls. But, if drying your clothes inside is your only option, because you don’t have a tumble dryer or an outdoors area in which you can hang a clothes line, make sure you open a window.

A dehumidifier can also help dry your clothes more quickly and deal with the moisture that evaporates into the air, stopping it forming condensation.

Many dehumidifiers have a specific laundry setting, which whacks the fan speed up to maximum and aims for a lower relative humidity, drying the air faster and driving dry air over your wet clothes – recreating the conditions you’d have outside on a warm, breezy day.

If your dehumidifier doesn’t have a laundry setting, you can still use it to dry your washing, though. Hang your clothes on a clothes airer and place the dehumidifier nearby.

Normally, you should open a window when drying clothes indoors, as we said before. But you should close the window if you’ve got your dehumidifier running, or it’ll have to work harder as it attempts to dehumidify a greater area.

Manufacturers say that dehumidifiers dry your clothes more gently than tumble dryers: because they don’t use heat, they shouldn’t shrink or otherwise damage fabrics.

Explore our expert guide on improving your indoor air quality at home.

3. Use your extractor fan hood when cooking

Make the most of your kitchen extractor fan if you have one – if this leads to the outside of your house, moisture in the air has a way to escape. If your fan is one that pushes air through a filter and then back into the room, make sure you also open a window. 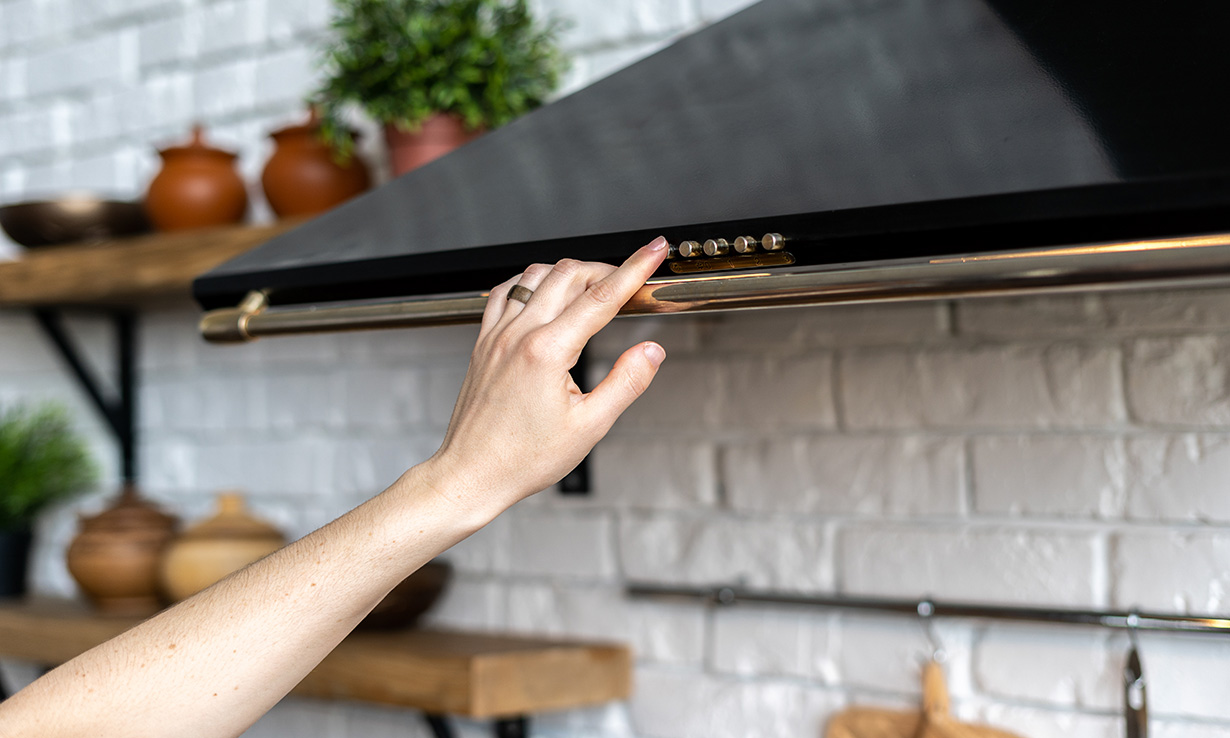 Cover pots and pans as much as possible while cooking. Watch out for ceiling mould above your kettle, and don’t position your kettle under a cupboard. Try to close your kitchen door when cooking.

4. Keep your home tidy so that you spot signs of mould more easily

Mould is a fungus that grows from spores. Dusting and vacuuming your home regularly can help prevent mould from coming back. Keeping you home tidy and avoiding clutter will make it much easier for you to spot signs of mould.

If your current vacuum cleaner isn’t particularly powerful, it might be time to upgrade. A strong vacuum can suck up dormant spores from your sofa or your rug, which is a big step towards preventing mould. 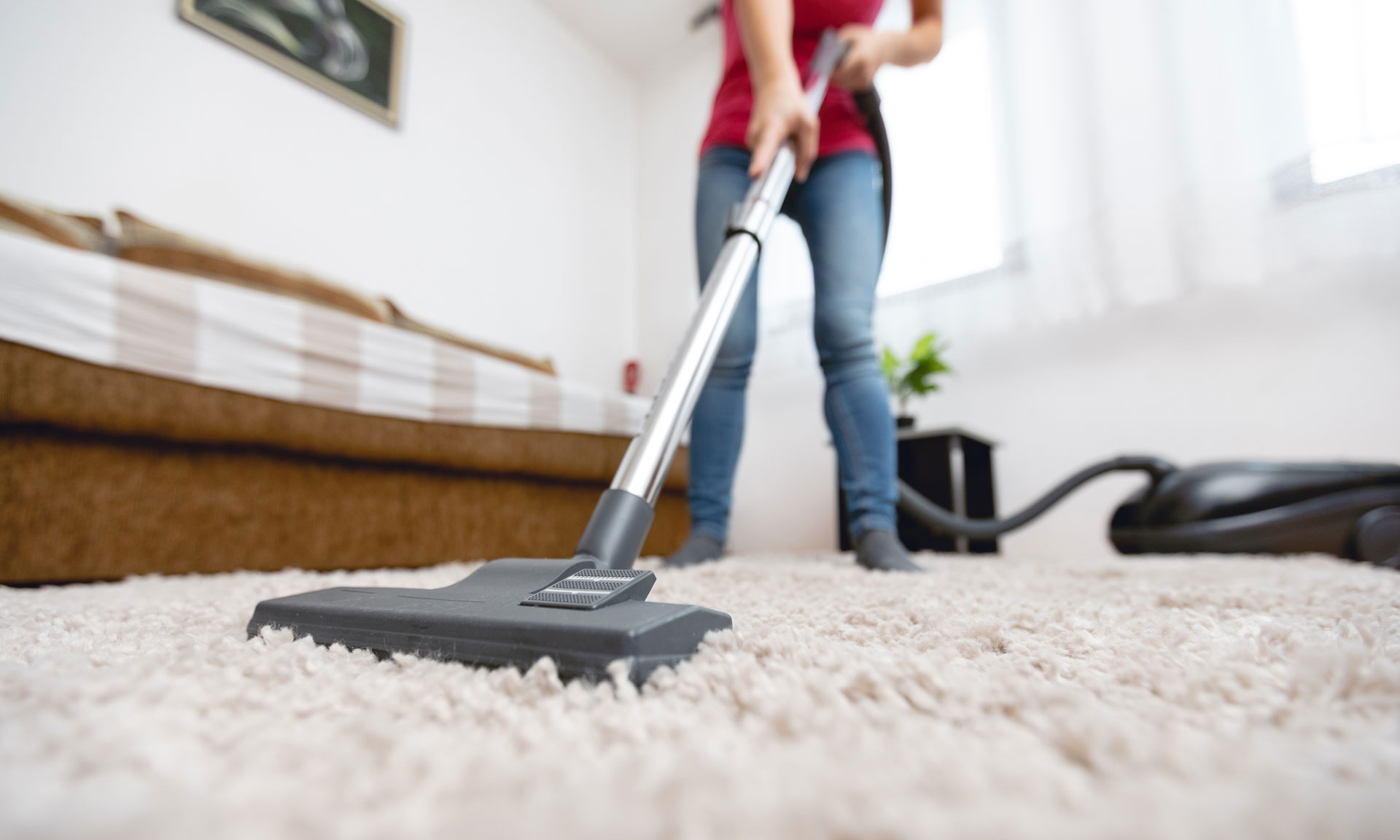 The best vacuum cleaners we’ve tested can power through any cleaning task, whether you’re hoovering the hallway rug or cleaning a hard-to-access spot behind the sofa. Our top-scoring upright vacuum cleaner is a good pick for pet owners and has no difficulties sucking up larger debris such as lentils either.

Keep your bathroom as dry as possible to prevent mould forming there. After showering, dry your bath, sink and other wet surfaces, and hang your towels and bath mats rather than leaving them in a damp pile.

Replace the seal around your bath if you notice it starting to peel away.

Keep toiletries that aren’t used regularly in your cupboard. If you’ve got dozens of bottles of shampoo and shower gel sitting out on your shower tray or around your bath, it will be harder for you to notice that mould has crept in. When cleaning your bathroom, clear aside toiletries and check the area for mould. If your tile grouting or sealing is discoloured, it could well be mould.

5. Make sure that your home is adequately heated and insulated

Very cold rooms are more prone to damp. You might not want to spend money heating a room that’s rarely used given high energy prices at present, but prevention is better than cure when it comes to mould. Consider heating rooms to at least a low level, or setting a heater on a timer.

Make sure that your home is well-insulated – but ensure that it’s ventilated too. Find out more about draught-proofing your home.

Have a look around your home and see if you can spot cracked caulking. This is a problem, as cracked caulking can trap moisture and therefore lead to a build-up of mould. 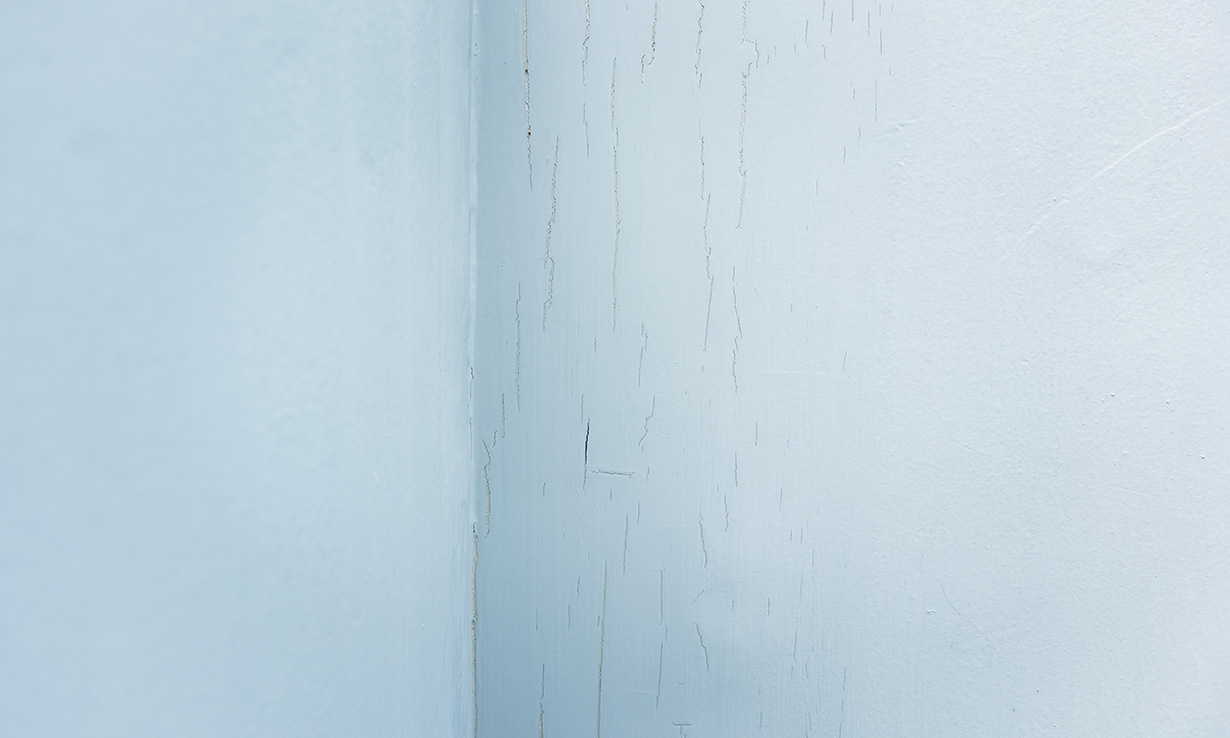 In most cases, you’ll need to go a step further than simply wiping down the surface. Seal the cracks completely to prevent the mould problem from getting worse.

Getting rid of mould

If you only have a small amount of mould, you’ll probably be able to remove it yourself.

You should avoid breathing in mould spores, particularly if you have allergies or breathing issues.  So, when cleaning up mould at home, it’s best to wear rubber gloves and mask that covers both your nose and mouth. If you have goggles, wear those too.

Remember to ventilate before spraying mould remover. You’ll usually need to leave this to work, then come back and wipe it off. Follow the manufacturer instructions to ensure you’re removing the mould and not just the staining caused by the mould. 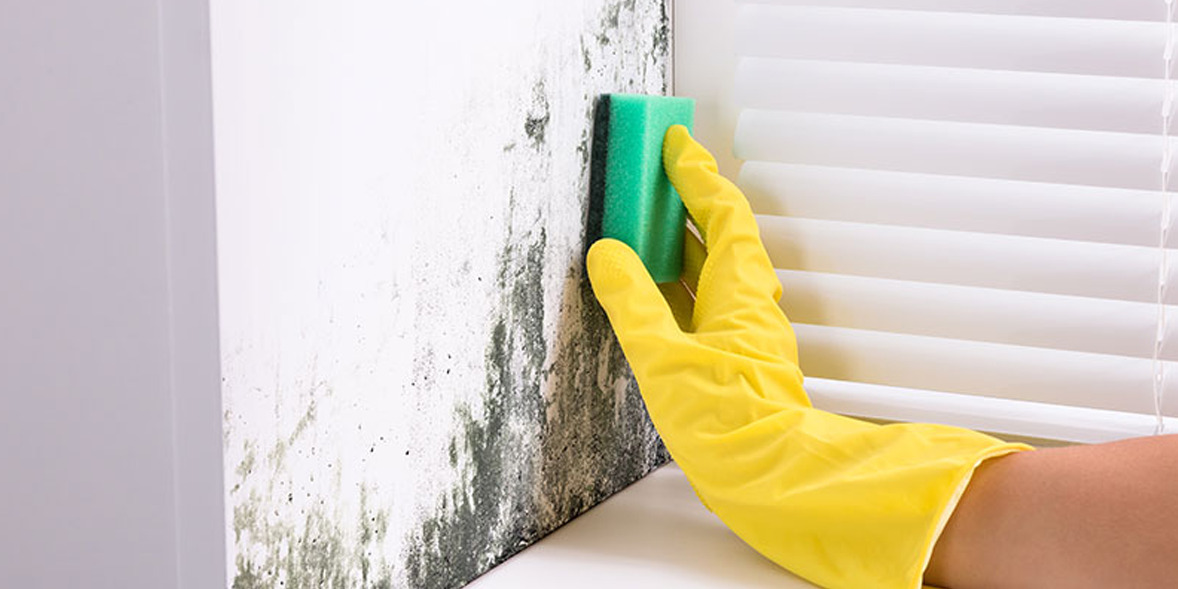 Once that’s done, you could consider treating the area with a mould-resistant paint.

If your mould problem is severe, you may need to call in a professional.

It’s important to tackle the problem at its source, though, and understand why you have mould in the first place, or else this will be a sisyphean task.

If you’re renting, and mould has developed as a result of a structural problem, your landlord should take action. Cracks in the walls, poor insulation, plumbing issues and rising damp fall to your landlord to sort. Notify your landlord as soon as possible to get things moving in the right direction – describe where the mould is and what damage has been caused.

If your landlord is refusing to deal with the problems causing the mould, find out how to claim against your landlord for disrepair.

As a renter, your responsibility is to ventilate correctly and to heat your home appropriately so that mould can’t build up over time. In turn, your landlord shouldn’t make unreasonable demands of you, such as asking you to dry your clothes outdoors if there’s no access to an outside space.

In extreme cases, if it can be shown that the build-up of mould was due to a lack of proper housekeeping, a landlord could try to deduct money from your deposit.

Whose responsibility it is to resolve damp problems isn’t always a clear cut matter, as it can be difficult to determine the cause. Citizen’s Advice has more guidance regarding renters’ rights in damp accommodation.