In this article
The Funds Fund Performance Coronavirus Update

*If you are a member of the Hybrid Section of the Scheme who has saved AVCs with Legal & General, the information on this page applies equally to the money in your Legal & General AVC Account.

The Which? Mixed Investment Funds and Selected Retirement Age

The Funds are run by Legal & General Investment Management (LGIM), and the underlying assets that make them up are described below.

Which of the three funds your money is invested in at any point in time depends upon your choice of Selected Retirement Age (SRA).

Your fund choice in the last 3 years before your SRA is chosen by you, see below.

If you were auto-enrolled into the Scheme, your SRA was set at 65 and you will have been emailed to ask you to consider whether this age is right for you.

Your SRA may be any age and you may change your SRA at any time, subject to giving the Pensions Manager one month's written notice.

Your SRA is not meant to be the age at which you are bound to take your benefits, however it does tell the Pensions Team how you wish us to invest your money, as summarised in this table.

This is known as 'Lifestyling' and is intended to help you plan your retirement.

As the above table shows you the Funds are invested in a diversified range of underlying assets:

You may read more about the current asset allocations in the most recent Investment Newsletter.

To see how the Funds have performed in the last year against the Trustees’ Investment Target see the most recent Chair's Statement.

For more detail about these investments see the Pensions Team pages on the Intranet or contact us.

The Gilt and Cash Funds

Gilts are a type of bond: they pay a rate of interest and are issued and backed by the British Government.

The Gilt Fund is a tracker that aims to mirror the returns of the UK gilt market.

It tracks the 'FTSE Government (Over 15 Year)' gilt index, which invests in medium and long-term government-issued fixed interest gilts.

Generally less risk means lower returns, and gilt returns have historically been lower than returns from stocks and shares over the long-term.

The Cash Fund aims to deliver competitive rates of return from cash deposits and other short-term investments.

It offers security of capital over the short-term, rather than growth in the long-term.

Cash is generally not considered a suitable asset for longer periods of investment of years rather than months, because historically it has lacked the ability to keep pace with inflation.

Investment Options when You Get Closer to Retiring

As you approach the three years before your SRA we will ask you to make a choice between three different investment options designed to cater for different retirement plans. These are:

Your Trustees urge you to seek independent financial advice before making a decision on your retirement option.

If you add more money to your Pension Account by making additional voluntary contributions to the 'Lifestyled AVCs', this money is invested and lifestyled in exactly the same way as described above.

If you add money to the 'Ethical UK Equity AVC Fund' it is not lifestyled in this way, so all the money stays invested in the same fund unless you tell us you want to move it.

The Ethical UK Equity AVC Fund is not available to members of the Hybrid Section of the Scheme.

The Trustees may be able to claim compensation under the Financial Services Compensation Scheme if Legal & General are unable to meet their liabilities.

The current level of compensation available is 100% of the claim with no upper limit.

Legal & General Investment Management Limited, the DC Section's investment manager, is a subsidiary of Legal & General Group plc, one of the UK's largest insurance companies, and is authorised and regulated by the Financial Conduct Authority.

The following three performance charts show you the annual performance for the Which? Mixed Investment Funds A, B and C, their two AVC versions plus the Ethical UK Equity AVC Fund.

The performance is measured as the percentage change in the unit price over one year, three years, five years and from inception (when the Fund was made available to you).

(More accurately, the performance is the percentage change in the unit prices of the underlying assets, weighted according to their allocation).

Where the period is for more than one year, the performance has been scaled to show you an average annual performance for each year in the period.

The charts are updated monthly.

AVC Funds A, B and C plus Ethical UK Equity AVC Fund

If you add more money to your Pension Account by making additional voluntary contributions it can be invested in these AVC Funds. 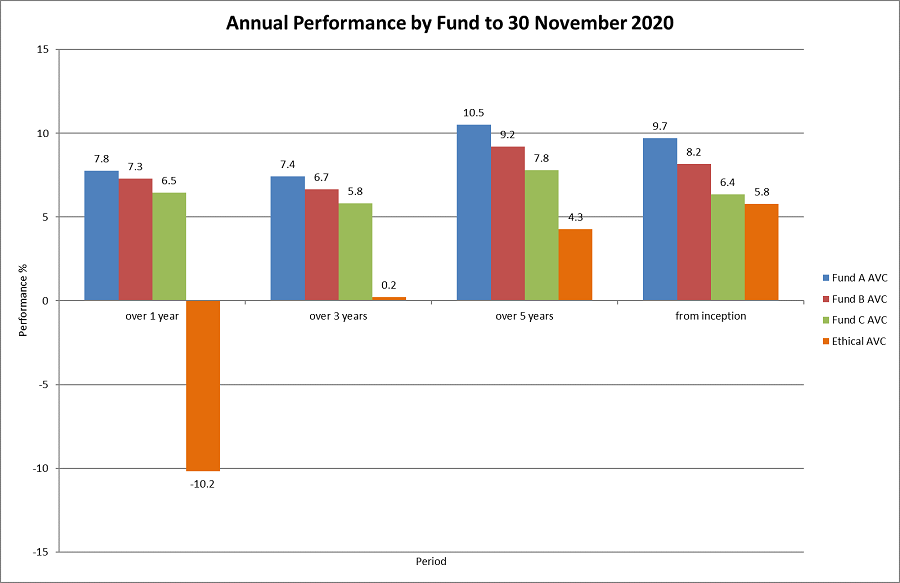 Hybrid AVC Funds A, B and C

If you are a member of the Hybrid Section these are the Legal & General AVC Funds that you may have invested in.

The performance on each chart is very similar, because each class of Fund shares the same allocation benchmark for each of their underlying assets - i.e. the target allocation to each asset in Fund A, Fund A AVC and Fund A Hybrid AVC is the same and so on.

Read Which?'s advice on how pension funds are being affected during the coronavirus outbreak here.

The following performance chart shows the percentage change in the price of each of the Which? Mixed Investment Funds plus the Ethical UK Equity AVC Fund since the start of the year 2020.

(More accurately, the performance is the percentage change in the unit prices of the underlying assets, weighted according to their allocation).

The effect of COVID-19 on the investment markets started to become apparent in February 2020, so this chart gives a reasonable idea of the impact of the virus on the Funds in the year to date. 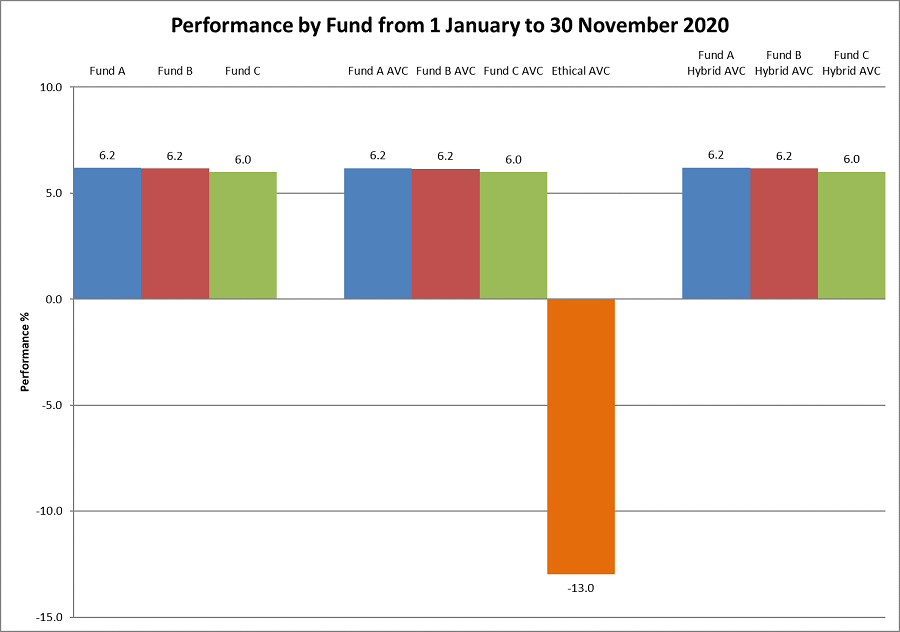