We asked Which? members to rate the quality of beaches and value for money for nearly 100 seaside towns and villages in the UK. These are the five best for beach-lovers on a budget.
In this article

The best seaside destination in the UK, according to our recent survey, is also surprisingly good value. The average hotel in the area costs £95 a night. Cynics might say that it’s because it’s on the windswept North East coast but this wild, rugged beach has enough natural charm to make it worth making a visit even on a chilly day. Turn one way and you look across the water to the Farnes Islands and its fabulous bird life. The other way rugged, romantic Bamburgh Castle dominates the view. At the back of the beach sand dunes might provide some much-needed shelter.

A child’s fantasy of what a beach should be like, Tenby has, not just acres of golden sand but also a 13th century castle sitting atop a rocky promontory that’s only accessible on foot when the tide has gone out. Tenby itself is one of the UK’s most charming seaside towns, with fishing boats bobbing out on the bay and pastel houses looking out to sea. Average hotels prices here are just under the £100 mark, too, or for something more luxurious St  Brides Spa is a short drive up the coast.

Britain’s smallest city has some of its most appealing beaches. The best known is the surfers’ haven of Whitesands, just off the Pembrokeshire Coast Path. Surrounded by steep cliffs, dotted with flowers and wild grass, it’s also home to nesting peregrine falcons. Less well-known Caerfai Bay and Caer Bwdy bay, to the south of the city, provide a quieter haven for those who are not carrying their surf board.

This bit of the Norfolk coast is a little more expensive – with average hotel prices around here about £109 – but it still gets four stars for value for money, mainly thanks to its unspoilt, beach. From the carpark you’ll climb the steps up over the dunes and then have a view of acres of soft golden sand, backing on to brightly coloured beach huts. The dunes provide shelter from the wind while, just along the coast is Blakeney point, famous for its seal colony and bird life.

Bude’s beaches look like they could have been designed for a family holiday. The most famous, Summerleaze right in front of the town, has big enough waves to please the surfers but it also has it’s a long, clean stretch of sand, its own semi-natural swimming pool and gorgeous rock pools next to the small harbour. Further along the coast are wilder coves waiting to be explored. With average hotel prices around £87 it’s also much better value than some other parts of Cornwall.

Thinking about a UK seaside stay? Check out our reviews of the Best and Worst UK Seaside towns.

Seaside town score is based on a combination of overall satisfaction and how likely people were to recommend the destination in our survey. The average hotel rate is based on data from Kayak for hotels with a star rating of three or four. 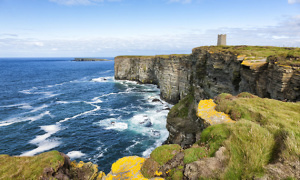