On your benefit statement we show you a Money Purchase Pension income based on the current money in your Money Purchase Account and assuming you are age 65.

The money in your Account is invested in the Prudential With-profits Fund, so your money is pooled together with money from other people. The Fund is managed by Prudential, who puts the money into different types of investment, such as shares, property, bonds and cash.

The costs of running the With-profits Fund incurred by the Prudential are deducted and what is left over (the profit) is available to be paid to you and all the other investors - you get your share of the profits in the form of Annual Bonuses added to your Account. Once an Annual Bonus has been declared and applied to the money in your Account it can never be removed.

The Prudential tries to avoid big changes in the size of the bonuses from one year to the next. It does this by holding back some of the profits from good years to boost the profits in bad years – this process is called ‘smoothing’.

As a result of the smoothing you might also get a Terminal Bonus when you come to retire; it is awarded at the discretion of Prudential and they are at liberty to reduce it or even remove it entirely.

This why we tell you what the Terminal Bonus part of your Account is worth on your benefit statement. Knowing this you can envisage how much your income would reduce by if Prudential did not award it; e.g. if your Terminal Bonus makes up half your Account, then without it you would get half the income we have calculated.

(It is worth noting that even though in some years when there has been very poor investment performance the Prudential have reduced the Terminal Bonus applicable to the Scheme, they have never yet removed it altogether. The Scheme has been running since 1974).

The Trustees may be able to claim compensation under the Financial Services Compensation Scheme if Prudential are unable to meet their liabilities to the Trustees.  The current level of compensation available is 90% of the claim with no upper limit.  Prudential Assurance Company Ltd, the money purchase fund investment manager, is a subsidiary of Prudential PLC, one of the UK's largest insurance companies, and is authorised and regulated by the Financial Conduct Authority.

If you have made additional voluntary contributions to Prudential, received an augmentation payment from your Employer or transferred-in a pension from another pension arrangement to your Hybrid Pension, this money has been added to a separate AVC Account that is invested with Prudential and is given bonuses in exactly the same way as your Money Purchase Account.

If you have made additional voluntary contributions to the DC Lifestyled AVC this money has been added to a separate AVC Account that is invested with Legal & General. This money is included in our calculation of your income from AVCs on the benefit statement. It is not included in the Prudential SMPI, but a separate SMPI calculation is made (see below). This money is invested in the same Legal & General Funds that DC members of the Scheme are invested in - you may find further information about them on the page about Funds.

If you have made additional voluntary contributions to Equitable Life, this money is now managed by Utmost Life and Pensions, and you will receive a statement from them in your benefit statement letter.

If you have made additional voluntary contributions to Clerical Medical you will receive a statement from them in your benefit statement letter.

Special rules apply to “money purchase” pensions, and so we are obliged by legislation to provide you with an SMPI of the possible income from the money in your Money Purchase Account plus your Prudential AVC Account, if you have one. The SMPI is calculated for us by Prudential according to the strict rules set out in the legislation.

The SMPI has not been calculated using the basis prescribed by the Financial Services Authority.  If you obtain illustrations from another pension arrangement you should consider whether or not they have been prepared on a similar basis to this one.

It is not the same calculation as the one we use for actually calculating your income and it gives a significantly different figure. The assumptions used for the SMPI income calculation (as at 1st April 2021) are as follows, along with a comparison to how we calculate your income.

The assumptions used by Prudential to calculate the SMPI may change every year.

Those used on the benefit statements issued at 1st April 2020 were as follows. 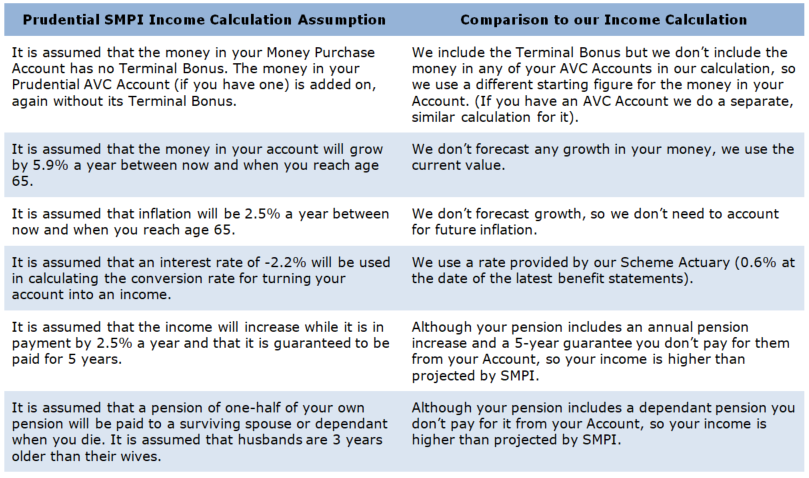 Those used on the benefit statements issued at 1st April 2019 were as follows. 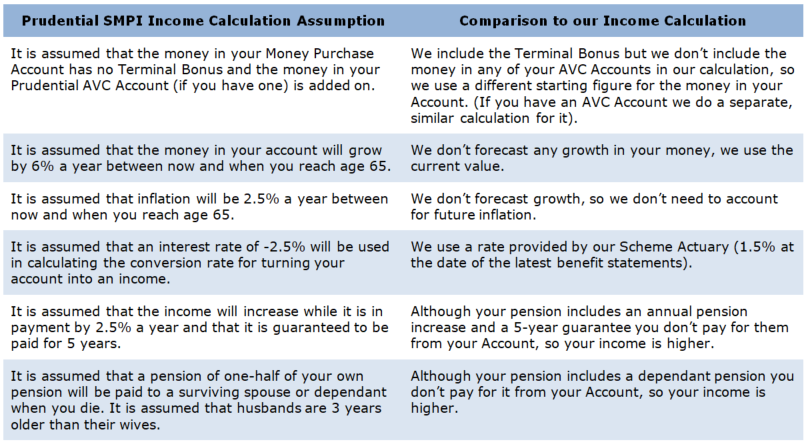 We are also obliged by legislation to provide you with an SMPI of the possible income from the money in your Legal & General AVC Account, if you have one. The SMPI is calculated for us by the Scheme Actuary according to the strict rules set out in the legislation.

The SMPI calculation starts with an amount of money, forecasts how much that will grow to between now and your Selected Retirement Age (SRA), reduces that forecasted amount to take account of inflation between now and your SRA, then calculates an income in today’s money based on further assumptions about what the money has to pay for.

This is the same calculation method used to calculate an income from your Legal & General AVC Account on the benefit statement.

For more information about the assumptions used by the Scheme Actuary see the page on Forecast Assumptions.

You may find further information about your Selected Retirement Age on the page about Funds.