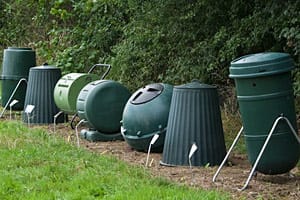 Turning your compost heap speeds up composting by introducing more air. Should you use a fork or invest in a compost tumbler – a compost bin designed to be tumbled?

The tumblers tested were: Blackwall Compost Tumbler, CompoSphere, ComposTumbler, Envirocycle Composter and Tumbleweed Composter. They range in size from 140 – 315 litres and cost from £95.94 and £203.90. Our conventional bin was the 300l Rotol Composter which costs £35.

All the bins were two thirds filled with garden waste. The tumbling bins were tumbled three times a week. One conventional bin was forked over weekly, the other left unturned. We assessed the quality of the compost after five, seven, 10 and 14 weeks.

The conventional bin forked over weekly gave us well-rotted compost in 10 weeks – a month sooner than the compost tumblers and four months quicker than the conventional bin that wasn’t forked over. All of the tumblers became harder to turn as the garden waste broke down as this made them bottom heavy. With the CompoSphere especially there’s a risk of even fit people straining themselves when turning it.

Stick to a conventional heap or bin. Which? Gardening Editor Ceri Thomas said: ‘Compost tumblers are a pricy way of speeding up composting. You can make compost just as quickly in an ordinary, cheap compost bin if you fork over the waste once a week.’