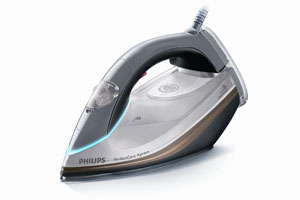 Philips has launched a new pressurized steam iron without a temperature dial – the PerfectCare Xpress.

Instead of a temperature dial, Philips claims its exclusive ‘OptimalTemp’ technology – which combines a constant low soleplate temperature and high pressure steam – maintains one perfect setting for any fabric, allowing you to iron your laundry in any order without damaging delicate fabrics or pausing to adjust the setting.

Get the Which? verdict on how effective this technology really is in our full review of the Philips PerfectCare Silence steam generator, where we reveal how it performed in our rigorous ironing tests.

The PerfectCare Xpress is a hybrid iron – a cross between an ordinary steam iron and a powerful steam generator. It lacks the bulk of a traditional steam generator as it doesn’t have a separate water tank. Instead, an ultra-compact steam generator within the iron pumps out high-pressure constant steam (up to 65g/min).

Philips says that the combination of dial-free technology and pressurised steam in a traditional steam iron offers ‘the best of both worlds’, making short work of your ironing pile without the expense or bulk of a steam generator.

The PerfectCare Xpress costs £119, which is expensive for a steam iron, but cheap for a steam generator. But will it be the ultimate ironing solution?

Which? ironing expert Jess O’Leary says: ‘Hybrid irons are less bulky than steam generators and pump out more high-pressure steam than a conventional iron. On the downside, they can’t steam for long so you’ll have to top up the tank a lot. If you want a more powerful iron but aren’t ready to invest in a Best Buy steam generator, a hybrid iron could be a good compromise.’

Get the Which? verdict on the latest hybrid irons

The PerfectCare Xpress is already at the Which? test lab, being scrutinised by our ironing experts. Results are due back in early 2013 so make sure you bookmark this page as we’ll update it when we have the results.

In the meantime, we’ve just tested our first hybrid iron – find out what our experts thought of it by reading our review of the Bosch Sensor Steam Power TDS1220GB.

The Philips PerfectCare Xpress (GC5057/02) is available from John Lewis.