Which? is recommending that parents replace their Nania Trio Plus Group 0/1/2 child car seat after it achieved the lowest possible score in our car seat test.

The Nania Trio Plus is a very cheap and popular child car seat, sold until winter 2012 during Asda Baby Events. It is designed to last children from birth (as a rearward-facing infant carrier) to 25kg (approximately six years old).

Although it has passed the legal safety standards for child car seats (ECE R44/04), we found that it scored just 0% overall in our more demanding crash tests. These include a side impact crash that’s not part of  ECE R44/04.

The Nania Trio Plus is no longer on sale, but we recommend that anyone who already owns one of these car seats replaces it as soon as possible.

Read our full review of the Nania Trio Plus for more on why this car seat did so badly in our tests.

The Which? child car seats test

We test child car seats in front and side impact crash simulations. Both tests are developed from Euro NCAP crash test loads, which are based on typical real-life crashes.

Our results indicate that a child using the Nania Trio Plus would be at risk of serious injury in the crashes we simulated. Other car seats that we’ve tested, particularly our Best Buys, do a better job of restraining a child and reducing the loads placed on a child’s body in a crash. 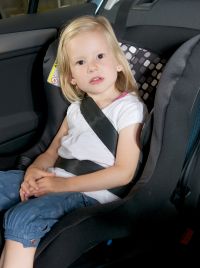 The seatbelt should not be across the neck and tummy

The Nania Trio Plus can be used in three different ways.

As a forward-facing Group 1 for children of 9-18kg it scores only 36% because of poor front and side impact results.

But the Nania Trio Plus routes the adult seat belt through the seat, so that the force of a crash is absorbed by the neck and tummy (shown in this picture on the identical Kiddicare Maxi SP child car seat, in our ease of use test). This is an unacceptable outcome in our tests, resulting in a very poor rating for front and side impacts, and leading to a score of 0% for Group 2.

We also found that it is easy to fit the seat incorrectly, which can prevent the seat from providing the protection it should in an accident.

Responses from Team Tex and Asda

We asked Team Tex, manufacturer of Nania child car seats, to comment on the results of our test and in May 2013 received the following statement:

‘The Team Tex Trio car seat, which is sold under the name Maxi SP by Kiddicare and Nania Trio by Asda, is fully approved to the current European safety standard for child car seats sold within Europe (regulation ECE R44.04) and continues to be approved by regular ongoing testing under the conformity of production requirements of this regulation.

‘In our opinion there is no better product available in the market at this price, which fully satisfies the requirements of the European safety standard.

‘Team Tex does take note of the more stringent Which? tests and has already made modifications to the Trio since the Which? test was made to improve the performance of the car seat.’

A spokesperson from Asda also commented in June 2013:

‘We’ve not sold this car seat since last year. All of our car seats are tested to the same EU standards that are in force across the retail industry. We would support going further in legislation and are happy to work with the industry to advise on how we make this happen. Team Tex is happy to replace the seat tested by Which? with a brand new, modified version.’

Due to the large volume of enquiries Team Tex has received it has asked that any customer who has one of the criticised car seats and wants it replaced, sends an email with their contact details and a photo of the car seat’s serial number, to: enquiries@teamtex.co.uk

Is your seat the older version?

Both the old Nania Trio plus and the modified Nania Trifit models look identical from the front but if you’re not sure exactly which version you have you can check by looking at the back of the car seat. The new model has a slightly different design on the car seat shell – as you can see from the picture above.

Kiddicare offers to refund or exchange the Maxi SP

Alex Fisher, Commercial Director at Kiddicare says: ‘Kiddicare works closely with its own brand manufacturers to develop and improve its products. All Kiddicare car seats meet the official and current ECE R44/04 European safety standard, however, we recognise that customers may be concerned by the Which? test findings.

‘Therefore, Kiddicare will be happy to exchange any Kiddicare Maxi SP car seat for an alternative Kiddicare own brand car seat, or provide the customer with a credit or refund, either in-store or via our central customer care team.’