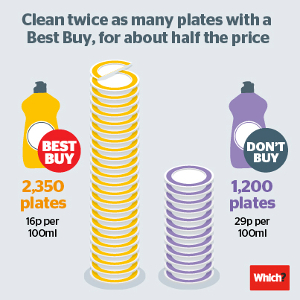 Washing-up liquid isn’t usually the priciest item on anyone’s shopping list, but that doesn’t mean you can’t make savings that add up over the course of the year without compromising on grease-busting power.

We’ve just tested 13 washing-up liquids from big brands – including Ecover, Fairy and Persil – and major supermarkets. And the best washing-up liquid in our latest test washes twice as many as the worst, and costs half the price.

Which? members can log in to find out which were the best and worst in our washing-up liquid reviews.

Not yet a member? Join Which? to get instant access to all of our online reviews.

The evolution of washing-up liquid

Back in 1959, washing-up liquids were brand new products in the UK. We ran our first tests of dishwashing products and many of them were multi-purpose soap powders or flakes that could also be used to wash clothes, bedlinen and even carpets. 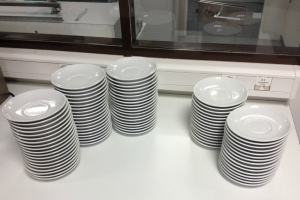 The specialised, concentrated liquids of today are much more powerful and easier to use, but they aren’t all perfect.

Even now, plenty of washing-up liquids show room for improvement, with some turning washing-up from a dull chore into a tedious mix of scrubbing, scraping and disappointment.

So we put them through our tough tests to let you know which ones are worth buying.