That’s the big question: should you buy an 8K TV? You’re probably expecting us to say, ‘no, don’t do it, there’s barely any 4K content outside of Netflix and Amazon Video, and readily available 8K content is literally non-existent.’ But we’re not going to say that because Samsung has actually made an 8K TV with a point.

The Q900R, which is available in sizes from 65 inches all the way to a dizzying 85 inches, has a panel that can play native 8K resolution content, but it uses some incredible technology to try and make even the lowliest SD video look spectacular. It’s called AI upscaling and the technology works on HD and 4K footage, too, boosting the clarity and definition to somewhere close to 8K quality. Having seen the TV in action, the 85-inch one at least, we can say that the results are astonishing.

The caveat to all this praise is that we’ve only seen the Q900R in controlled conditions. We haven’t had a chance to watch the TV with anything other than Samsung test footage. But if the quality at home can match the ideal scenario that Samsung shows off, the Q900R will be a truly special TV.

Don’t get us wrong, £4,999 is still a lot of money for a TV, but when you consider that LG’s high-end 65-inch E8 OLED costs close to £4,000 and isn’t even top of LG’s range, the Q900R’s cost doesn’t look quite so ridiculous. Ultimately, it proves that the Q900R isn’t a gimmick or a marketing stunt; it’s a TV that Samsung wants people to consider if they’re in the market for a high-end set. 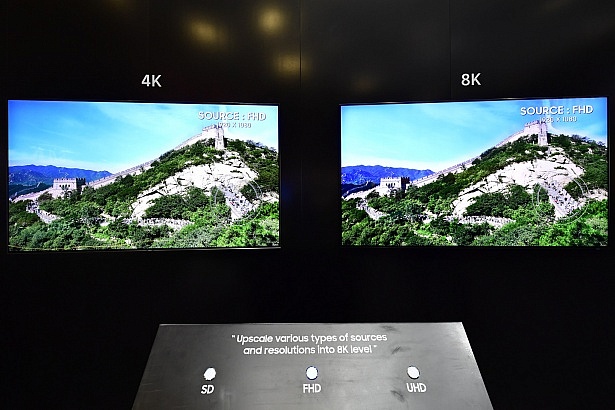 How does the upscaling work?

The most important feature of the Q900R is the upscaling of content to near 8K quality. It’s what makes this TV relevant. Samsung calls its technology AI upscaling and it works by analysing every object on screen and referring to an enormous database of images which it uses as a reference to sharpen up the video being displayed. Samsung will update the database with more images over time.

These upscaled images will never be as sharp as proper 8K content, but in theory it should have the crispest SD, HD and 4K picture of any TV.

Will the size of TV make a difference to picture quality?

There’s a reason why the smallest Q900R is 65 inches. It’s the same reason why you don’t see 32-inch 4K TVs. Screens need to be a certain size for the benefit of increased resolutions to be evident. The colossal amount of pixels in 8K content – 33,177,600 to be exact and four times the number in 4K – would be wasted on a screen any smaller than 65 inches.

It’s likely that the bigger the TV, the more detail will be visible. Put the 65-inch Q900R next to the 85-inch model, showing the exact same footage being upscaled from 4K to 8K, and the bigger set would have the edge. But how much of an edge remains to be seen. We’ll be interested to see whether the upscaling improvements are very noticeable on the 65-inch model versus a Best Buy 4K 65-inch TV showing the same footage. 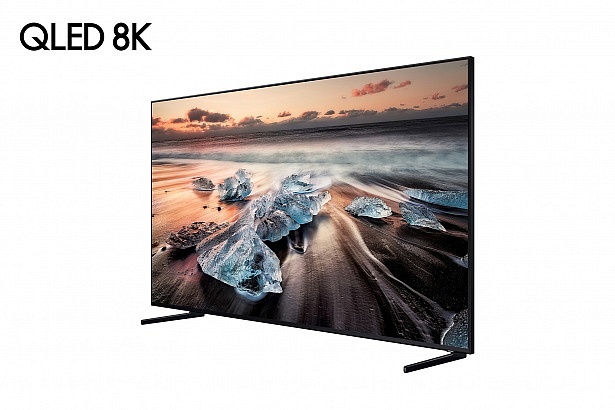 The brighter the better

As well as being the UK’s first 8K TV, it’s also the brightest set you can buy. Screen brightness is measured in nits and the Q900R’s screen can reach a staggering 4,000, which is the equivalent of 4,000 candles and more than twice as much as many OLEDs. It’s extreme, and quite possibly excessive, but Samsung says the extra brightness will allow the TV to pick out more smaller details.

Is the time of the 4K TV over?

Of course not. The Q900R may be a landmark TV and we’ll start to see a slow drip of rival 8K sets from LG and Sony, but the vast majority of each brand’s line-up for years to come will be 4K. Samsung has released 60 TVs in the UK in 2018 and only three of them are 8K; don’t expect this number to climb much in the next few years.

The 65-inch Q900R may be priced more reasonably than we expected, but it’s still too costly for most. We know from our own research that our members don’t typically spend more than £750 and it will be some time before an 8K set drops to that sort of price. 8K TVs will become more affordable every year though, as is the way with most new technology. With the price already starting at something not a million miles away from high-end OLEDs, we may not have have to wait too long for one to match them.  Don’t expect the price of the Q900R to drop, though. Despite the price of most TVs dropping significantly in the eight months after they launch, the new and unique nature of the Q900R means it’s unlikely to follow the same trend.

If the Q900R is out of your price range, don’t despair – our testing has uncovered fantastic TVs at a fraction of the price. Head to our guide on the best cheap TVs and the best 4K TVs to see our favourite models.