Nearly four in ten solar PV owners we surveyed have had a problem with their solar panels, exclusive Which? research reveals.

The most commonly reported issues were with inverters. More than one in ten owners (12%) in our survey said they’d had a problem with their inverter, accounting for 25% of all the problems and faults people told us about.

Inverter issues were also the most serious and, in some cases, prevented the solar panel system from generating any usable energy. Some 55% of those who experienced a problem said that their inverter became inoperable – a fault which can cost more than £900 for a professional to fix, according to our survey.

Read on to find out the next most-common issues faced by owners of solar panels, and expert tips on how to solve them. Or check out our advice on buying solar panels. 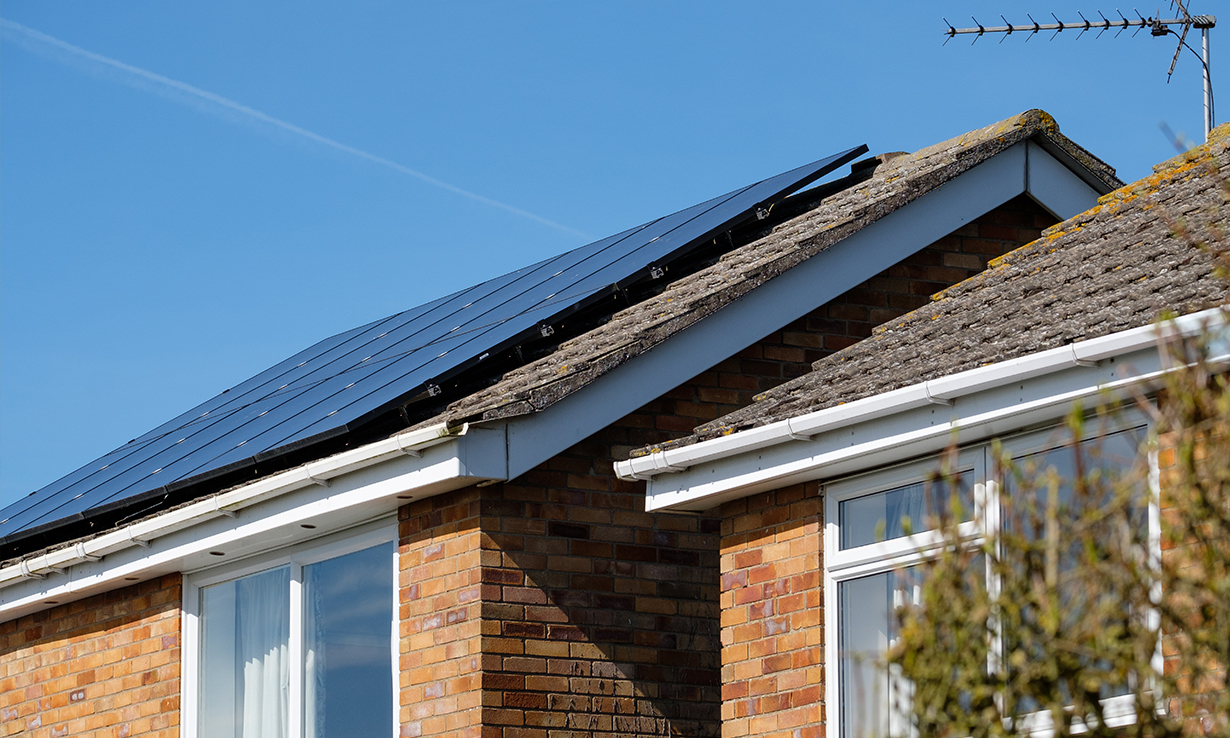 After inverter issues, birds nesting under the panels and dirt building up on the panel glass were the most common problems flagged to us by owners. 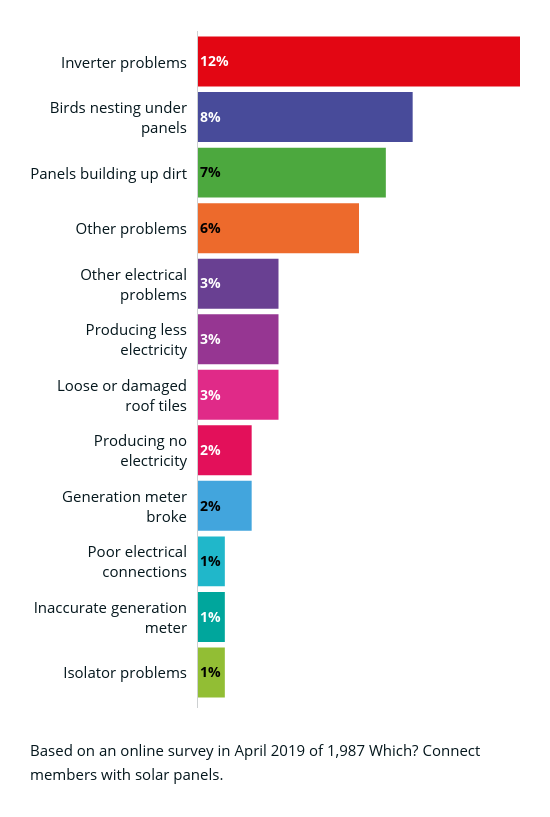 Dirt building up on solar panels is one of the more minor issues that owners are likely to experience. It affects owners in the south east and London more than those in other regions, according to our survey.

Electrical problems and panels producing less electricity than previously were each experienced by 3% of owners.

Three solar panel owners had squirrel problems, discovering them nesting under the panels or biting through cables. 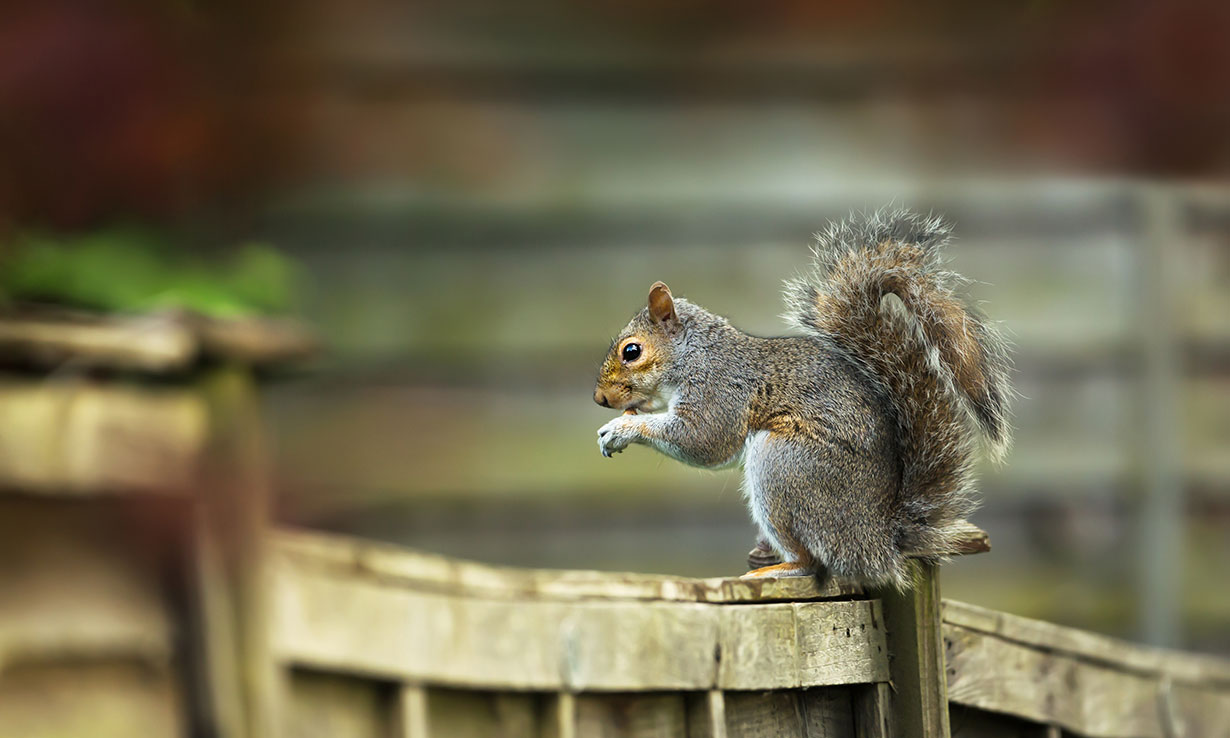 To find out about solar panel problems, we surveyed 1,987 Which? Connect members with solar panels on their home in May 2019. The poll was conducted online.

How solar panel owners got their problems sorted

No matter what the fault, the most popular approach to getting it fixed was the solar PV firm doing so under warranty. Of those who experienced issues, 17% fixed it themselves successfully, while another 17% hired a professional. Just 3% admitted trying to fix it themselves and then calling in a professional.

How did you fix the problem with your solar panels? 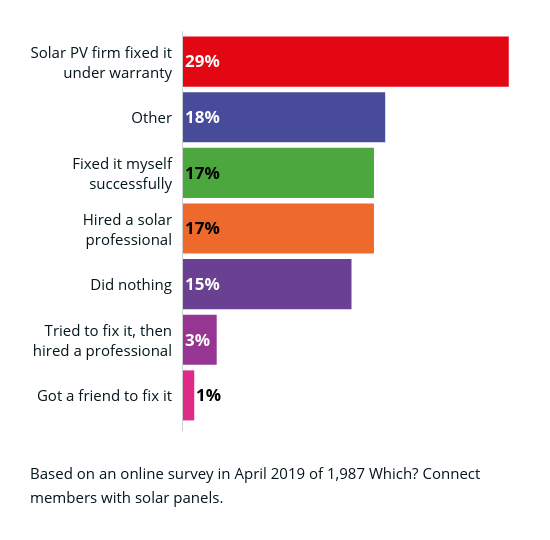 The vast majority of problems with inverters, poor electrical connections, panels producing no electricity, and other electrical issues were fixed either by the solar PV company under warranty or by a professional hired by the owner.

Once your inverter is out of warranty, set aside some cash, as it’s not cheap to replace. It cost £900 to £1,600 on average for those we surveyed who tried to fix it themselves and then got a professional in. Even those who successfully fixed it themselves found that it cost £500 to £1,200 on average.

A third of people with generation meter problems said the solar PV firm fixed it under warranty, although nearly a quarter (23%) fixed it themselves. Sorting it themselves was also the most popular solution for panels that had a build-up dirt.

But nearly half (46%) of those who found that their panels were producing less electricity said that they did nothing.

To help you identify and resolve the most common problems, we spoke to Which? Trusted Traders Bright Green Renewables and Ask Renewables. 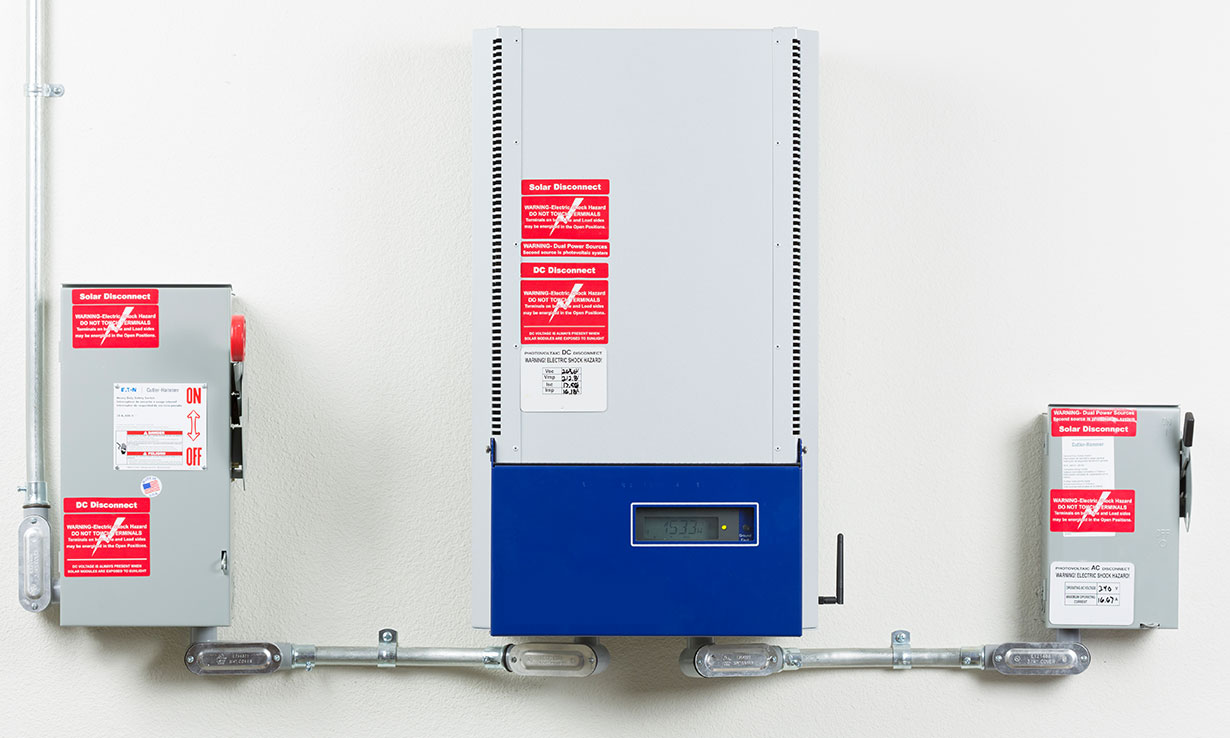 Half of inverter problems are actually due to the solar array having a faulty panel or cable and the inverter detecting this, according to Bright Green Renewables managing director Mark Partridge. If the inverter is showing an error message, refer to the manual (or search online) to find out what it means.

Check that solar PV breaker in your consumer unit is in the on/up position, Ask Renewables advises. If it’s off (this can happen after a power cut), flick it on. If it trips to the off position again, call an engineer. If it stays on, check the inverter for error messages.

How urgently should I get it fixed? Without the inverter, you won’t be able to use electricity generated by your solar panels. So you won’t benefit from free electricity, or the feed-in tariff (if you get it). If the inverter is off or in fault mode, it is generally safe, Ask Renewables explained. 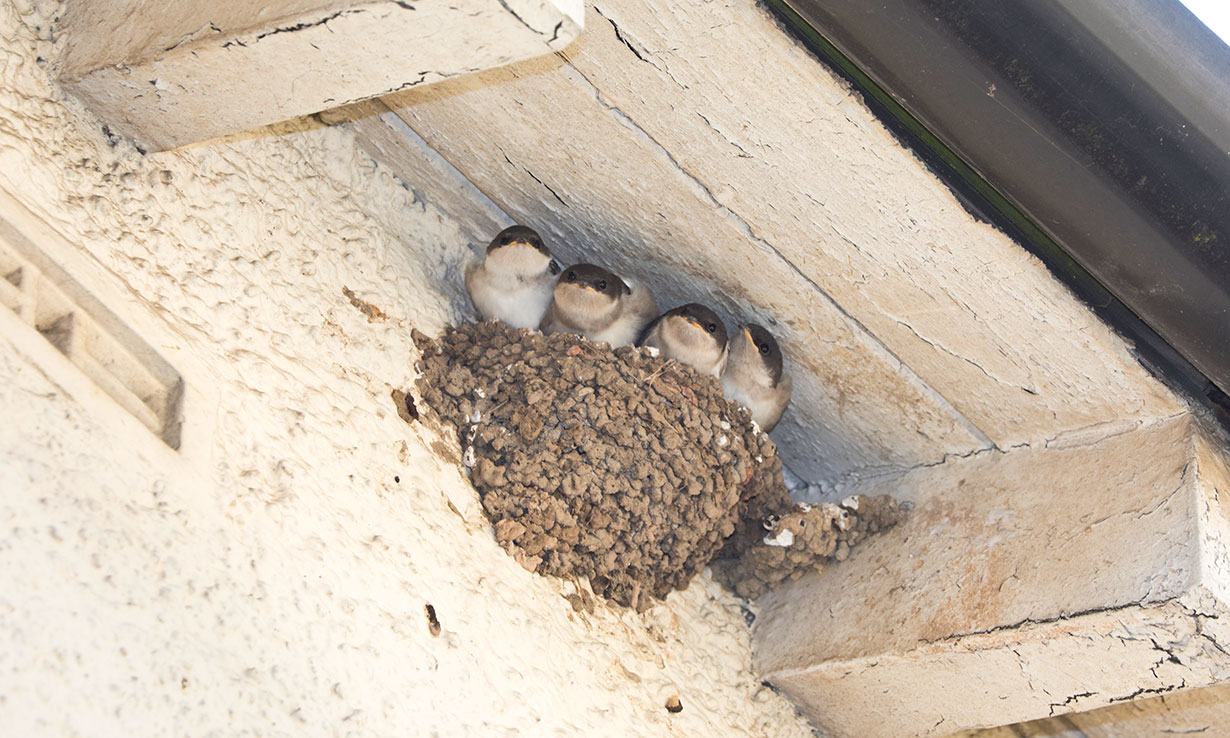 Birds nesting under your solar panels

Birds – or even squirrels – making their home under your solar panels is a pain, especially if they scratch them, damage the wiring or soil them.

You can buy plastic strips and attach them to the panels to help stop animals being able to squeeze underneath, Bright Green Renewables advises.

Or if you’re considering installing solar panels, consider roof-integrated panels. These can be complex to retrofit but are built into the roof, leaving no gaps for birds or rodents to get underneath them.

How urgently should I get it fixed? Birds nesting under your panels is annoying, and can result in damage. But it’s less urgent an issue to tackle than other problems. 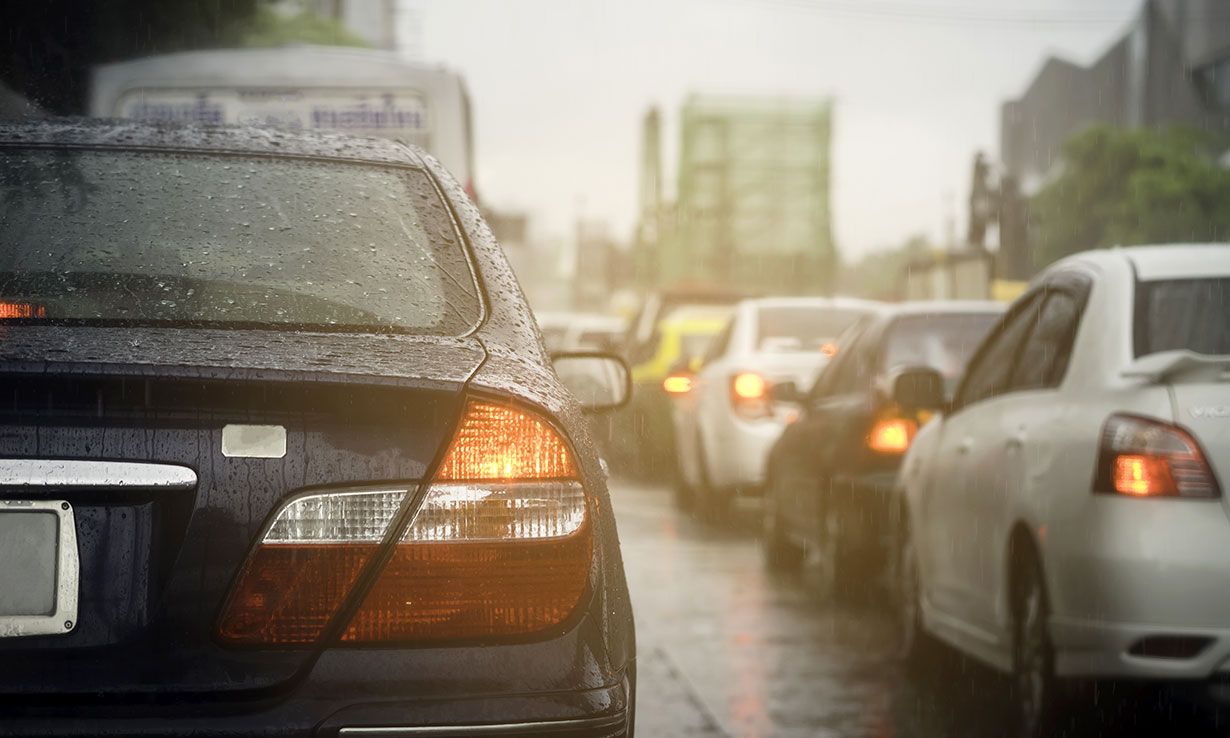 This might be caused by bird droppings, traffic pollution if you live in an urban area, or a build-up of salt if you live near the coast, Ask Renewables explains.

A heavy rain storm should usually be enough to wash off most dirt, it adds, although if you notice that it’s building up a lot then it could mean your panels generate less electricity than their potential.

How urgently should I get it fixed? Unless the build-up of dirt is very thick, or a significant amount has accumulated on one panel (perhaps a pigeon sits on your TV aerial and its droppings fall onto one panel), it’s unlikely to cause a problem beyond a slight drop in generation. So it’s worth fixing but isn’t urgent.

For more advice on fixing problems, including whether you can do it yourself, see our guide to solar panels and installation.

Inverter problems typically took the longest to occur after purchase, being spotted by owners on average between three-and-a-half years and four-and-a-quarter years after buying their system.

Owners whose panels stopped producing electricity said it was typically between two and four years after purchase – but this was a much less common fault.

How long after purchase did solar panel problems occur? 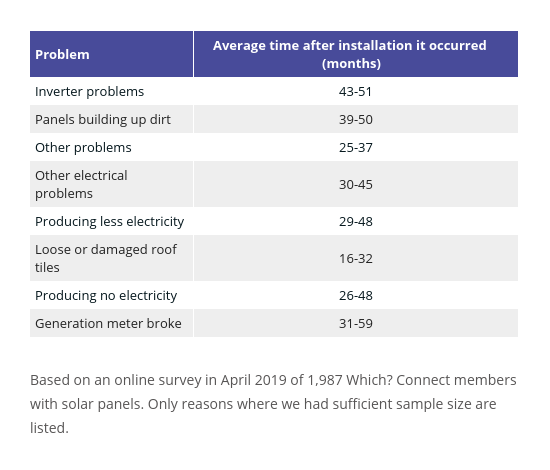 If you’re considering buying solar panels, take a look at our solar panel brand reviews. We’ve rated 15 of the biggest brands on value for money, ease of using the system and more.