They promise little or no use of plastic, and that all (or most) of their parts can be recycled.

Some don’t include the usual ‘play-with-it-once-and-then-chuck-it-in-the-bin’ gift and have gone for games that can be played over again or objects you’d really want to keep. 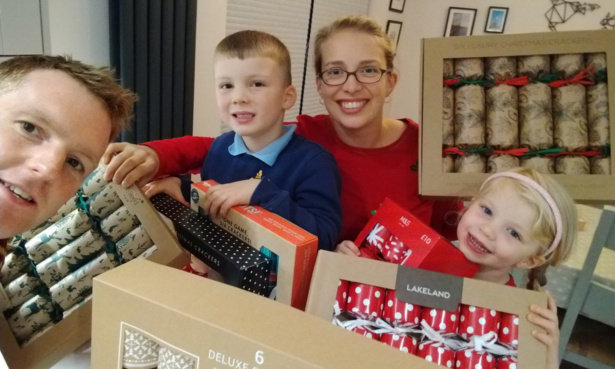 But which ones really keep the family entertained? We put seven, self confessed, eco Christmas crackers to the test. We means me and my family (wife Emma, my four-year-old son and three-year-old daughter), who joined me as honorary Which? researchers for the duration of our test.

The selection of eco Christmas crackers we tested all come in a pack of six and were from the most popular retailers with them on sale at the time of testing.

Each one was judged on appearance, the quality of the toys/gifts, the jokes and of course the bang. 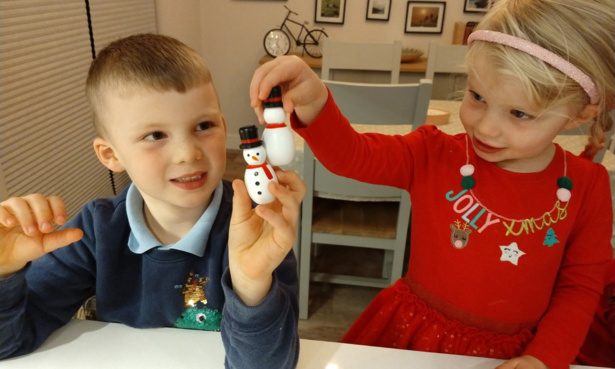 Two crackers tied for the top spot with the adults. The RSPB Woodland set and the Ridley’s Draw Lots Game crackers split our family panel.

My wife voted for the RSPB set because of their adorable keepsake gifts and the nordically festive wrapping; whereas I was slightly more fond of the Ridley’s crackers, which admittedly don’t look traditionally Christmassy, but do have a genuinely well-made and fun game inside. 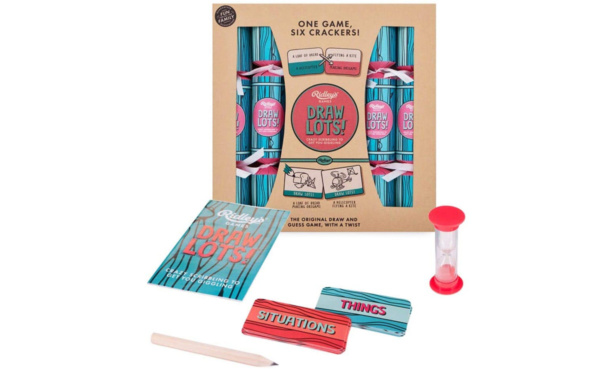 The appearance of these crackers caused a divide as wide as those who think serving yorkshire puddings with Christmas dinner is a must, and those who don’t. While they’re bright and fun, they aren’t particularly Christmassy, so won’t appeal to everyone.

What’s hard to argue with is that the game inside is genuinely good. It’s perfect silly fun to play for anyone aged six and over. Both my wife and I independently identified these crackers as having the best gift/game. You pick up a ‘situation’ and a ‘thing’ card and have to draw them for your team while the sand ticks through a timer. Try not to laugh when your team mate is drawing a loaf of bread making origami.

It’s worth noting that you need to open all of the crackers to get all of the game parts. So this set is best suited to a group of six. Ridley’s does a few other cracker sets with different games in them if you want to take your gaming off zoom and into real life on Christmas Day.

Not a lot about this one to be honest. My kids are too young for for this game, and were a little underwhelmed to open crackers that ‘only’ contained a pack of playing cards. But older children and adults would love it.

Why was the snowman looking through the carrots? Because he was picking his nose.

The packaging is recyclable and the cracker is too once you’ve removed the ribbon and the snap. The game is designed to be used again and again (and we think it would be), the sand timer is made of plastic though, which is a little disappointing. 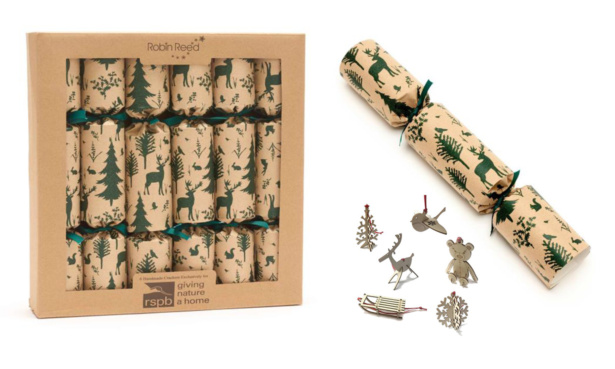 We thought these crackers looked striking and classy, but they were a little smaller than some (you can see our size comparison image further down).

But these crackers really wowed us when we opened them. The flat pack, wooden Christmas tree decoration you get inside is fun to piece together, very sweet, and genuinely classy. You can also reuse the ribbon from the cracker (the only unrecyclable bit) to tie the decoration to the tree.

My boy wanted to take crayons to his decoration, which proves these crackers’ broad appeal (and is something else to keep the kids busy after Christmas lunch).

The kids loved putting the decorations together too.

Clearly lots of other people loved these as well though as they’re currently out of stock at the time of writing and we can’t get hold of any info on whether they’re coming back.

What kind of maths do snowy owls like? Owlgebra

All plastic removed and replaced with recycled paper. Other than the ribbon, which you can use to tie the ornament to the tree, everything in the crackers as well as the packaging is recyclable.
The Kids’ favourite Christmas cracker 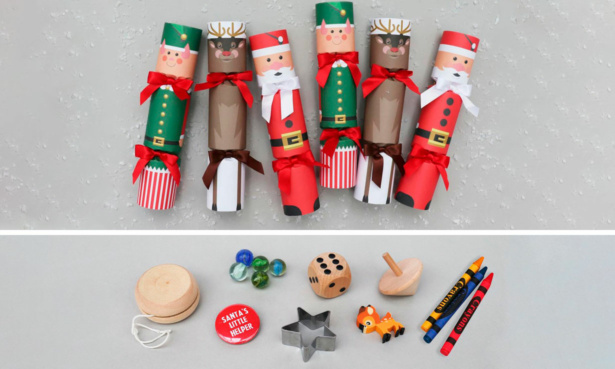 It turns out that for kids it’s very hard to beat traditional Christmas cracker toys. And i’ll confess to having an affinity for them too.

Although there are no mini screw driver sets in sight, my kids loved the badges, crayons, marbles, yoyos and dice. No plastic in sight on these gifts, which is a nice touch.

When I asked: “Why are these crackers your favourite?”, my son told me: “Because they’re so colourful and because they all work for Father Christmas. Because I got some marbles, and a badge, and a yoyo, and i’m happy because I lost my yoyo last week.”

Worth noting these were the smallest we tested. 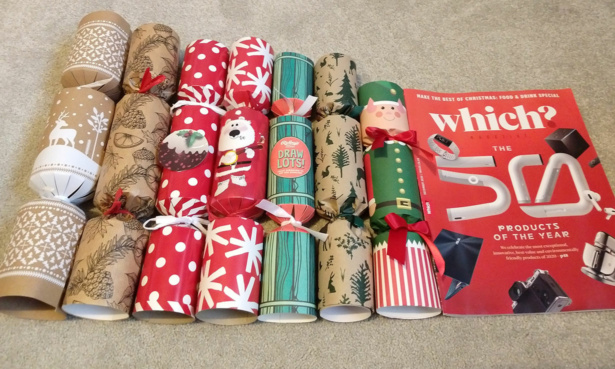 Independently we both singled these out as the best for the table setting. They just look fantastic.

They’re fun, but at the same time traditionally Christmassy. We could both imagine them being a talking point at any dinner table.

Before we opened them we were underwhelmed by the gifts we knew were inside. But the kids reaction to them soon changed our opinion.

What did Cinderella say when her photos didn’t arrive on time? One day my prints will come.

Other than the ribbon the packaging is recyclable, Nancy & Betty plants a tree for every box they sell, there’s no plastic.

Buy from: Nancy and Betty.

The other Christmas crackers we tested

These crackers provide a small, and unwanted, lesson in managing small children’s expectations. There is indeed no gift in the crackers when you open them. The game they come with (a version of charades where your team acts out the clue to you, rather then the other way around), is in the box.

In terms of how they look, these crackers caused a divide. Comments ranged from;

“They’re stylish, sophisticated and have a striking design”. To: “Does eco have to be so drab? it looks like a toilet roll”.

These are a decent set of crackers. But the game isn’t as good as the Ridley’s one and the no-gifts-in-the-crackers thing was a bit of a deal breaker in our house.

Hat, joke, but there are no gifts in the crackers, it’s in the box.

What did Santa say to the smoker? Please don’t smoke, it’s bad for my elf.

The packaging and the game are 100% recyclable, Not a bit of plastic in site. 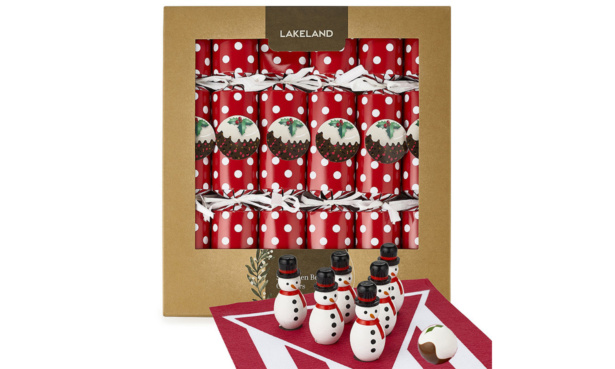 We liked these! They’re a nice set of crackers containing a fun snowman bowling game, which was loved by our young children. It’s also no bad thing that everyone gets the same gift when your kids are young.

The game might sound a little underwhelming, but the snowman pieces are made of wood and beautifully crafted. They also come with a soft mat to roll them on and a nice red bag to store the toys away for the next time you want to play with them, which if you have small kids around, might not be long.

Compared to some of the other crackers, us parents didn’t like the appearance of these as much. The polka dot design is festive, but the stuck on Christmas pudding looks a little like an after thought and that, combined with the shiny paper, gave these a less classy appearance than others we tested.

Hat, joke, nicely crafted bowling game with a snowman in each cracker and a mat storage bag and ball in the box

Why are Christmas trees so bad at sewing stockings? They’re always dropping their needles.

The game is reusable and there’s no plastic in it or any of the crackers. The crackers are made from recyclable card. 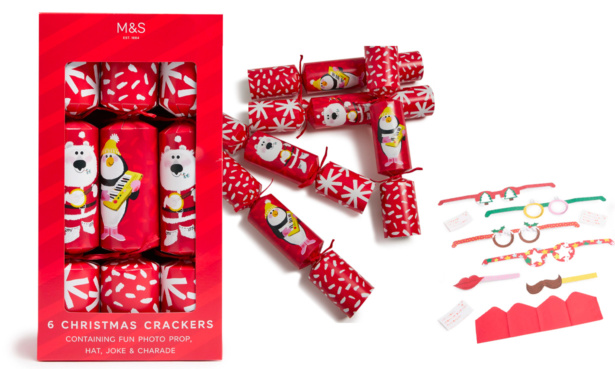 These are the cheapest set of crackers we tested (£10), but even at this price we were disappointed.

In the cracker you get a hat and a joke, but the gift of a carboard set of glasses or fake moustache is very underwhelming. Especially when you consider that spending only £3 more could get you the adorable wooden tree decorations in the RSPB Woodland crackers.

My three year old girl loved the Christmassy cartoon characters on the crackers, in fact they were her favorite when it came to appearance. But until she starts pulling her weight financially, it’s not enough to persuade us to buy this set. The adults thought they looked noticeably cheaper than the other crackers we were testing.

What you get inside:

A hat, joke, and a funny photo prop as the gift.

What athlete is the warmest in the winter? A long jumper.

100% recyclable including the ribbon. 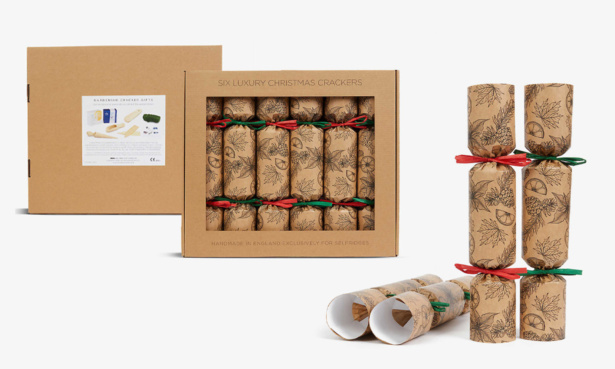 If you’re marvelling that you’ve got this far through an article without a reference to coronavirus…here it comes…It struck me when my kids got weirdly excited by the small bar of soap that dropped in their laps when they opened these crackers. Given that there’s probably never been a generation of children used to washing their hands so much, it perhaps shouldn’t have come as such a surprise.

Other than the soap, the gardening-focused gifts in these luxury Christmas crackers didn’t illicit any squeals of delight from our young children. But if you have a budding Titchmarsh or Dimmock in your family that might be different.

Us adults though, found them delightful, just not quite as Christmassy as the tree decorations in the RSPB set.

What you get inside:

A hat, a joke, the gifts are gardening focused and include seeds, soap, string, and other gardening tools and paraphernalia.

What happened to the man who shoplifted a calendar at Christmas? He got 12 months.

You’re instructed to remove the ribbons, bows, and the snap, at which point they become fully recyclable. The ‘toys’ are all reusable. Interestingly, these Selfridges eco crackers were the only ones we tested which instructed that the snap wasn’t recyclable. 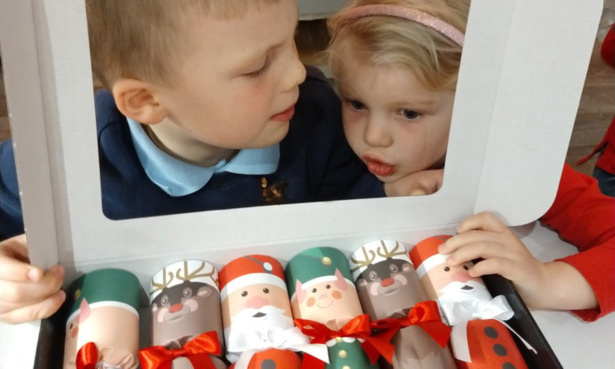 Which ones have we bought for Christmas?

Ultimately, each member of the family was asked which eco Christmas cracker set we should buy for our own Christmas celebrations, and the Nancy & Betty set was the resounding winner…heavily influenced by how clear a favorite it was for the kids.

Nancy & Betty is our family favorite by such a margin that we’ve already purchased ourselves a set for our Christmas day celebrations. 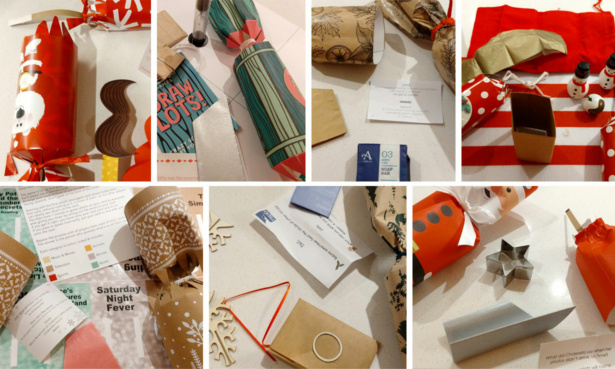 How we tested these Christmas crackers

As you can probably tell, we’ve had a bit of fun with this test…they’re Christmas crackers after all, but each was scored on: 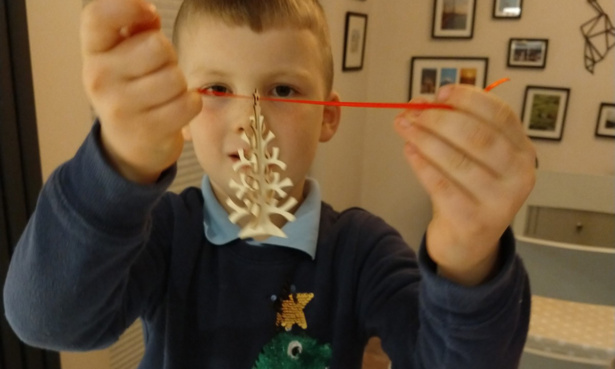 Are there zero waste Christmas crackers?

The crackers we tested above all call themselves eco, but, as we discovered, it’s not uncommon for self confessed eco crackers to have small elements that aren’t recyclable. Sometimes it’s a ribbon, sometimes the snap, a rubber band, and sometimes even a tiny bit of plastic can creep in.

So is there an even more eco alternative to these Christmas crackers?

The closest we’ve seen to truly zero waste Christmas crackers are the make your own reusable Christmas fabric crackers. They don’t come with a snap, and you’ll need to buy your own gifts to put inside them, which means they’re more of a cracker-shaped present than a cracker. But there’s zero waste because you can use them again year after year.