Premium-rate call services and claims management companies are paying to appear above insurers’ websites when people search for customer service phone numbers, Which? has found.

Your car breaks down, you grab your mobile phone and type your insurer’s name into Google to find its helpline number. You’re in a panic, so you tap the first search result and call the phone number that appears.

It’s only much later that you find out you’ve been charged a small fortune to make the call, or that you weren’t actually speaking to your insurer at all.

Our research has found if you click on the first Google search result, you could be left out of pocket or accidentally employ a third party to handle your claim.

Here, Which? explains how premium-rate services and claim firms dominate insurance customer service Google search results, and how to avoid them.

Nobody likes hold music, and you’ll dislike it a lot more if you find out you’re paying more than £4 a minute to listen to it.

We analysed search results for the terms people most commonly use when looking up their insurer’s phone number on Google and found that one in five searches displayed adverts for ‘call-connecting’ services at the top of the results.

These adverts appear directly above your provider’s website or phone number and have titles such as ‘Number connecting service’ or ‘Helpline Contact Number’, as shown below. 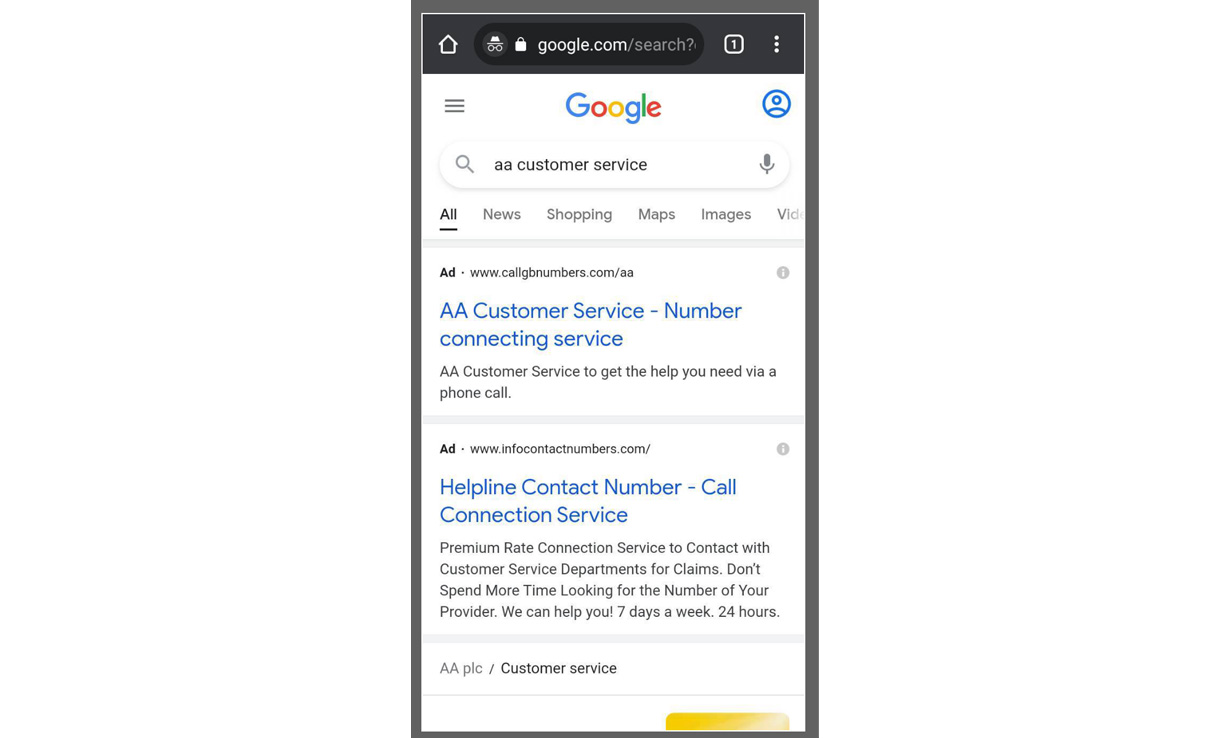 When you tap on an advert, you’re taken to a website which displays a large phone number and a button that says ‘click to call’.

When you click, you’ll be put through to your insurer, but via a premium-rate phone number. 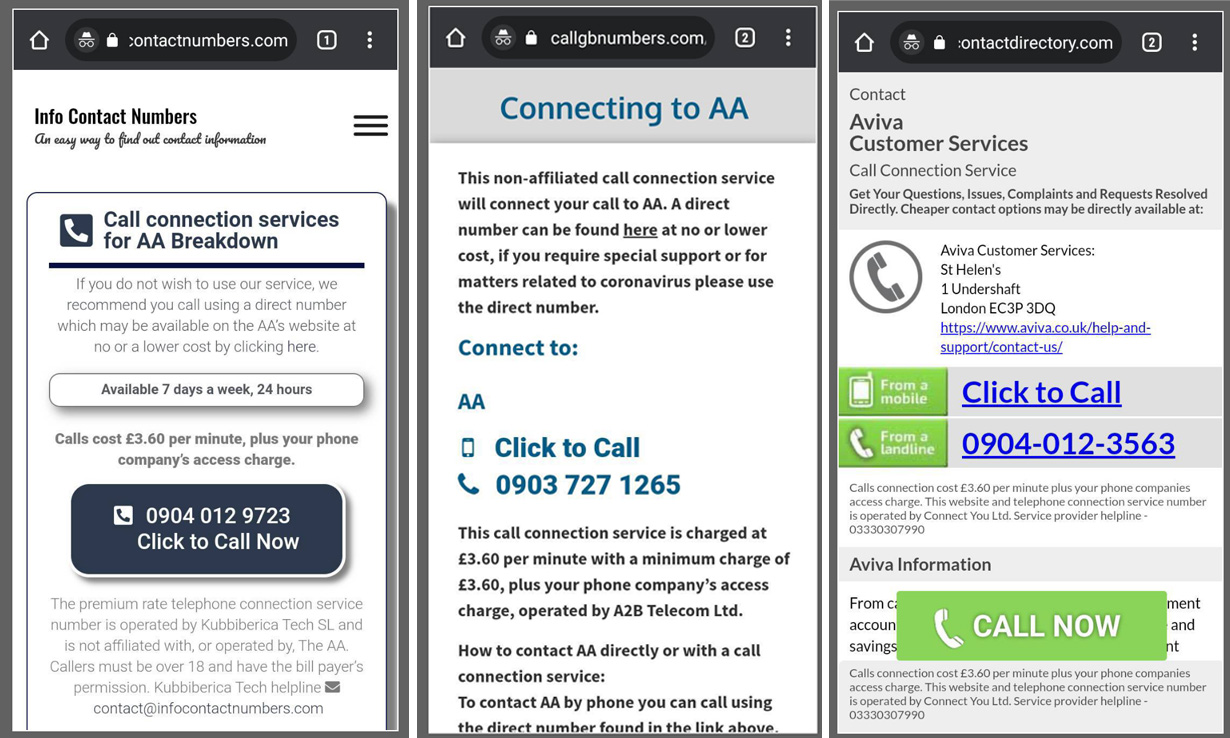 These services all use ‘09’ phone numbers. All the examples we found charged the maximum allowed for an 09 service – £3.60 a minute, plus your network’s access charge, which varies from 8p a minute to 65p a minute depending on your provider.

The table below shows how the cost of accidentally using a call connecting service can rapidly escalate, especially if you’re put on hold.

Are these adverts breaking the rules?

The Phone-paid Services Authority (PSA) regulates services charged to phone bills. Its rules state that a call connecting service must clearly state that it’s a third party, what its service does and the costs involved.

The services we found adhered to these rules, but the costs were often in smaller print below a prominent clickable phone number.

The PSA told us that it deals with more complaints about call-connecting companies than any other service, with 186 assessed in the last quarter of 2020.

In 2018, it commissioned research into how people interact with call-connecting adverts and found that people who describe themselves as less tech savvy could be more likely to fall foul of them.

These adverts we found adhere to the regulator’s terms, but they’re actually in breach of Google’s rules, so they shouldn’t be able to appear in the search results at all.

When we approached Google, it told us that it had removed the adverts we flagged and said: ‘Under our policy we prohibit ads for call directory, forwarding and recording services.

‘When ads breach our policies we take action to remove them. In 2020, we removed more than 99 million ads in relation to restricted businesses.’

How to avoid using a call-connecting company

When searching for customer service phone numbers, you should always be wary of adverts that appear at the top of the search results. The clearest sign is that these results will say ‘Ad’ in black text in the top left-hand corner.

Not all results marked ‘Ad’ are third parties. You may find that the insurer you’re trying to contact has taken out its own adverts to try and outbid call-connecting services.

Before calling any phone number, double check the website’s URL to ensure it definitely belongs to your provider. 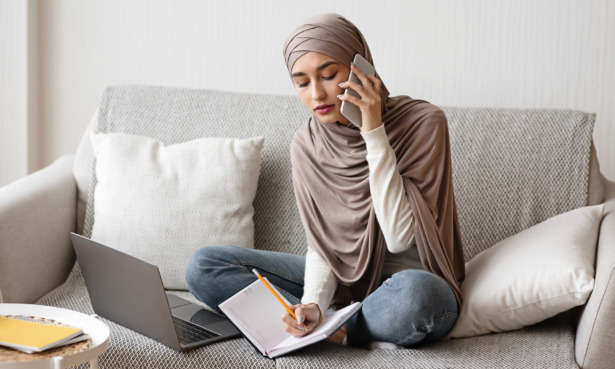 Adverts for claims management companies (CMCs), third-party companies that pursue claims on your behalf and take a cut from any insurance payout you’re due, were also rife when we searched for customer service phone numbers.

Some of these adverts could lead customers to believe they’re contacting their insurer, when they’re actually being put through to a third party to handle their claim. Insurers have been warning customers about the dangers of these adverts for years, but they still commonly appear at the top of search results.

The most worrying type of adverts are ‘click to dial’ ads, which appeared in two in five searches for customer service phone numbers. These adverts come in two forms.

The first type displays a large blue phone number, as shown below. 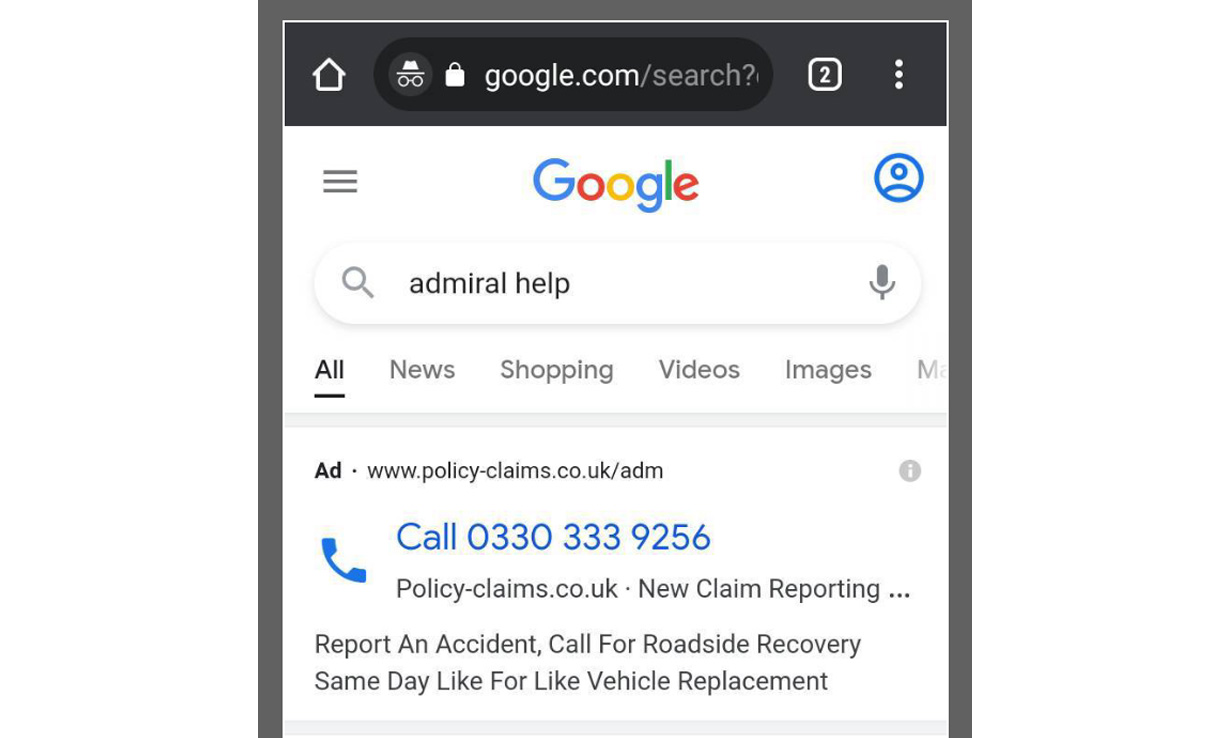 The second type of advert displays a black phone number below a link. 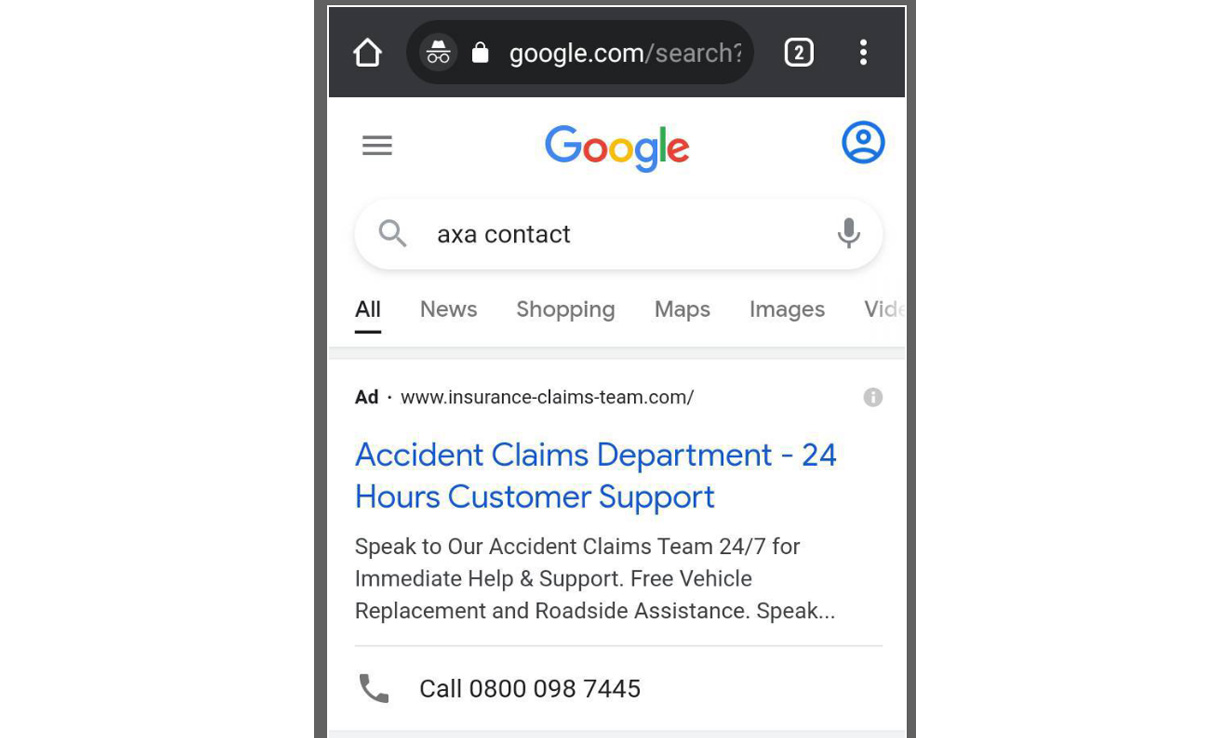 In both instances, when you tap on the phone numbers, your phone will be prompted to call them straight away. Adverts with blue phone numbers are of the greatest concern, as you can’t even click through to a website to confirm that you’re calling your insurer directly.

These adverts commonly use headings such as ‘Accident Claims Department’ and ‘Policy Claims’, which can lead you to believe you’re contacting your provider.

CMC’s are careful not to actually use the name of the insurer in the advert, as the insurer can then make a complaint to Google to have the ad removed.

Another potentially misleading example is shown below. In this instance, there’s no clickable phone number, but the heading of ‘Official Claims Department’ could convince customers they’re calling their insurer. 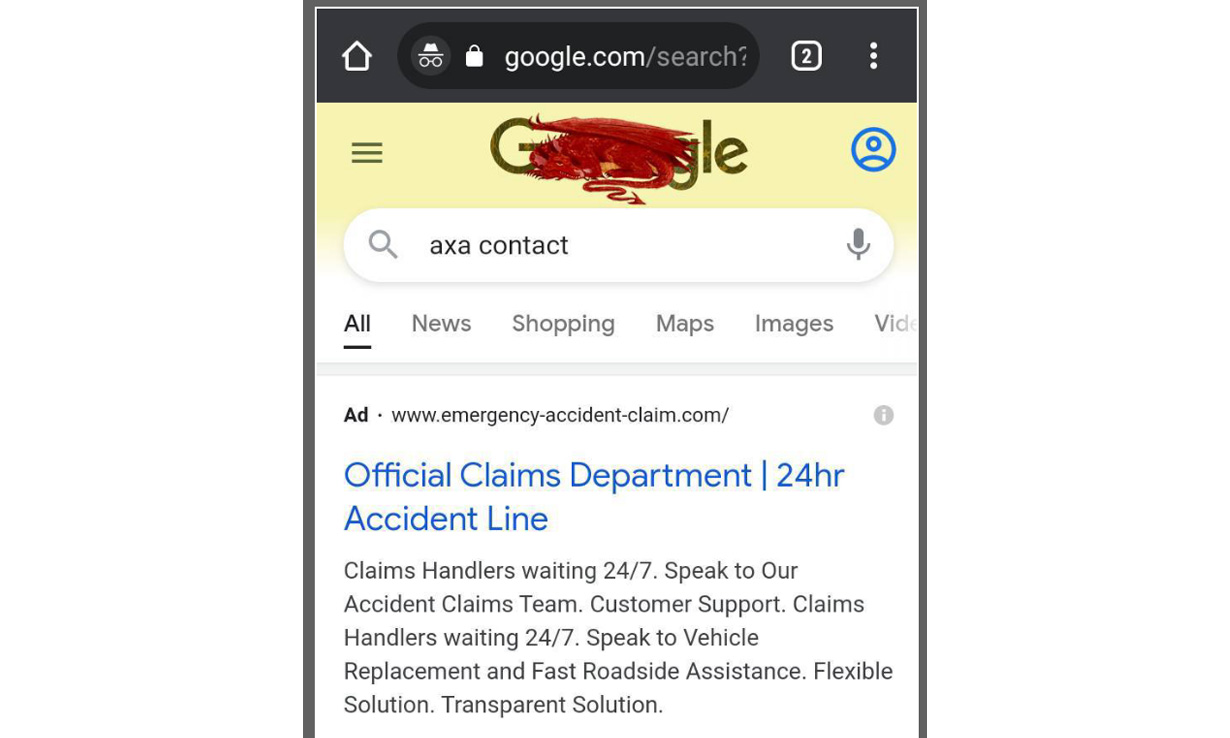 When we shared these ads with Google, it didn’t confirm whether they were in breach of its policy. It said: ‘To ensure a positive experience when users see or click on a Google ad, we have strict policies that govern the kinds of ads that we allow to run on our platform to prevent ads that are harmful.

‘We take the appropriate action to remove any ads that are in breach of our policies. We enforce our policies vigorously – last year we removed 3.1bn bad ads from our platforms.’

Insurers have long faced issues with claims management companies (CMCs) bidding on their search terms. Admiral published a guide on its website warning its customers back in August 2018.  LV and Aviva have published similar warnings.

Admiral told us that it has been complaining to Google about CMC adverts appearing at the top of search results for a number of years.

Alex Murphy, head of marketing at Admiral, says: ‘We’ve been aware of this issue since at least 2017 and have raised it with Google numerous times since then.

‘At the moment, CMCs bidding on Admiral search terms seem to be particularly active, but aside from bidding to get above them and raising it with Google, there’s not a great deal we can do to prevent this.’

Insurers can only request that adverts are removed for specific reasons – for example, if CMCs breach their trademark by using their name or logo.

This means many potentially misleading adverts remain active, and if insurers want to get their own adverts above CMCs in the search rankings, they have to bid increasingly large amounts.

In 2019, Admiral reached a compromise with Google, when it agreed to turn off ‘click to dial’ functionality on search terms related to the insurer – meaning neither Admiral nor third parties could benefit from having clickable phone numbers in Google results.

Alex says: ‘This change had an almost immediate effect on both customer reports of concerns and the amount of ads appearing. Unfortunately, since then it appears that these restrictions have been removed and these types of adverts, and related customer issues, are more prevalent.’

How to ensure you’re calling the correct company

Adverts for CMCs can be difficult to spot, but there are some telltale signs to look out for. As with call-connecting companies, keep your eye out for the word ‘Ad’ in the top corner of the search result.

Be especially wary of search results that don’t exactly match the search term you typed in and those that don’t state the name of the company you’re trying to call.

It’s also worth keeping your insurance policy book – or at least your insurer’s contact details – in your car, so that you won’t need to search for the number online if you’re involved in an accident or breakdown. 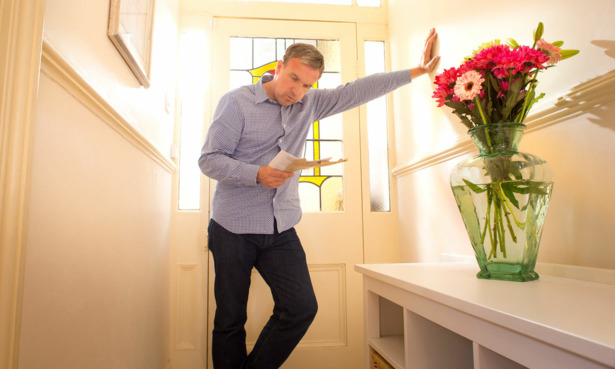 Which? calls on Google to do more about misleading ads

Adam French, Which? consumer rights expert, says: ‘Google needs to work proactively to prevent call-connecting ads that violate its rules and misleading click to dial ads from appearing in the first place. It must also take greater action to ensure these ads aren’t misleading consumers by branding themselves as “official” customer service numbers.

‘In the meantime, unfortunately it’s on us to keep an eye out for click to dial ads and call-connecting companies online. Keeping a copy of your car insurers policy book in the glove compartment – or at least writing down their details – can help ensure that you don’t make a costly mistake if your car breaks down.’

We analysed nine of the most common terms people use when looking for their insurer’s contact number on Google – for example: ‘Admiral customer service number’, ‘Aviva help’ and ‘LV contact’.

We conducted these searches for seven of the UK’s largest car insurance providers – AA, Admiral, Aviva, Axa, Churchill, Direct Line and LV. We ran each search at three different times of day – 9am to 12pm, 12pm to 2pm and 2pm to 5pm, resulting in a total of 189 searches. All searches were conducted on mobile phones using the Google search engine while in ‘Incognito’ mode.