Although they aren’t on the market yet, hydrogen appliances aren’t the stuff of science fiction.

Hydrogen produces water when burnt in air, rather than the carbon dioxide created by burning gas. So with the existing gas network supplying 86% of Great Britain’s homes, switching to hydrogen could be a ‘low-disruption’ solution to decarbonising homes.

We visited the ‘hydrogen home’ in Gateshead – where hydrogen boilers, cookers and fireplaces are on display – to find out what they’re like to use.

Read on to find out more about these appliances and the role hydrogen could play in the future of home heating.

In July 2021, two semi-detached houses equipped with appliances that run on 100% hydrogen gas opened to the public.

As the result of a partnership between Cadent and Northern Gas Networks and the government’s Department for Business, Energy and Industrial Strategy, the exhibition offers a glimpse of what a hydrogen home of the future could look like.

Watch the video to see some of the appliances in action and learn more about the benefits of hydrogen heating, as well as the obstacles that need to be overcome.

You’ll still be able to install new gas boilers until around the mid-2030s. If you need to replace your boiler now, read our Best Buy boiler reviews to find an efficient, reliable model.

‘The hydrogen home feels much like any other modern home. The hydrogen appliances look and (apart from some small differences) operate exactly like the natural gas appliances we currently have. A switch to hydrogen will leave your home feeling very much as it does today.

However, there are important questions to answer before we know how big the role is that hydrogen will play. Although if a switch to hydrogen does become an option to consumers, it’s set to be one that will cause minimal disruption or change in lifestyle.’ 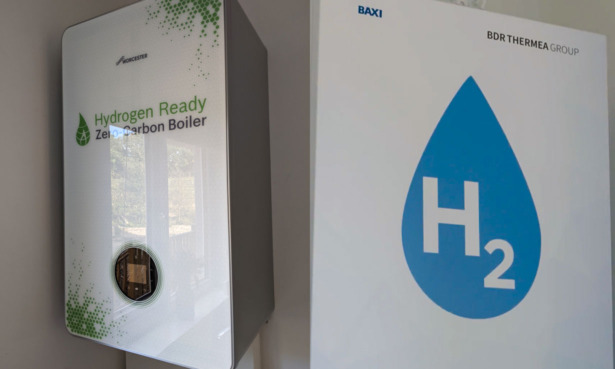 There are two prototype hydrogen boilers from Baxi and Worcester Bosch at the hydrogen homes.

When turned on, the boiler fires up with the familiar sound of a regular boiler, and within minutes the radiators are hot, giving the instant heat we’re used to from natural gas boilers. 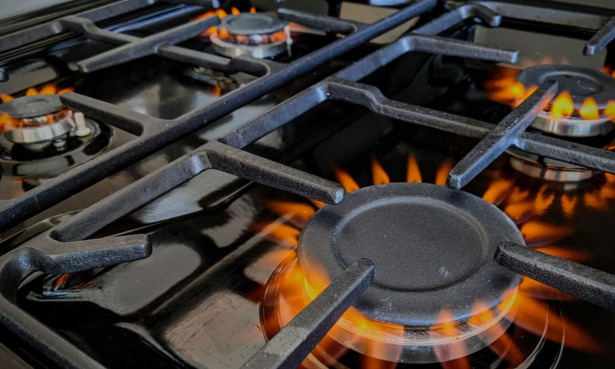 The cooker and hobs on display in the Hydrogen Homes are from Belling and Stoves. Like the hydrogen boilers, the cooker and hob look exactly like your current gas appliances.

These are the main differences we spotted:

The cookers also have a safety feature so the grill turns off if the cooker door is closed, and the hobs have LED indicators to show you if a burner has been accidentally left on.

Hydrogen is naturally odourless but, like natural gas, would have an odour added to it if supplied to public homes. This is so you can smell the gas and spot a leak. 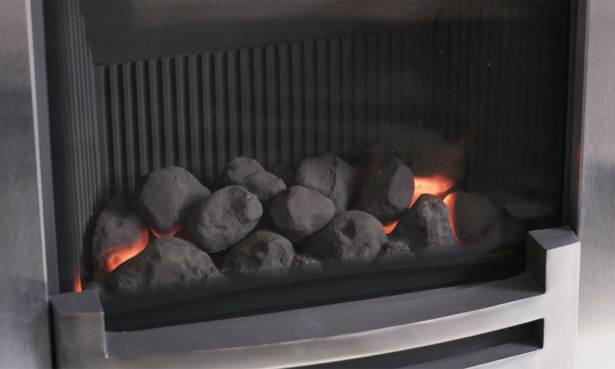 Besides the ‘squeaky pop’ sound on ignition, the hydrogen gas fireplace looks and feels exactly like a natural gas fireplace.

The prototype fireplace from Gazco lights the room with a warm orange glow and it pumps out a lot of heat, quickly warming the room it’s in.

Hydrogen sensors, manufactured by Fastsense, work like carbon monoxide alarms but for detecting a hydrogen leak.

Unlike carbon monoxide alarms, hydrogen sensors must be installed on the ceiling, because hydrogen – the lightest element – rises in air.

Around 17% of the UK’s carbon emissions comes from domestic heating. To help meet the net zero emissions target by 2050, we’ll need to change the way we heat our homes.

The government recently announced that homeowners will be able to get £5,000 grants towards installing a heat pump, and hopes that they will cost the same to buy and run as gas boilers by the early 2030s – encouraging more of us to make the switch.

But heat pumps won’t be suitable for every home. Most are installed outdoors, and homes require inside space to install a hot water cylinder.

Heat pumps also best suited to homes those that are already well insulated. So some homes will need a different type of heating.

Hydrogen produces no carbon emissions when burnt in air. However, like natural gas, when hydrogen is burnt in air it can still produce some air pollutants like nitrogen oxides, according to the independent Air Quality Expert Group.

Hydrogen boilers can be designed to reduce NOx emissions, and, if it can be supplied through the existing gas network, hydrogen would offer a less disruptive method for households to switch to low-carbon heating.

When will hydrogen appliances be available? 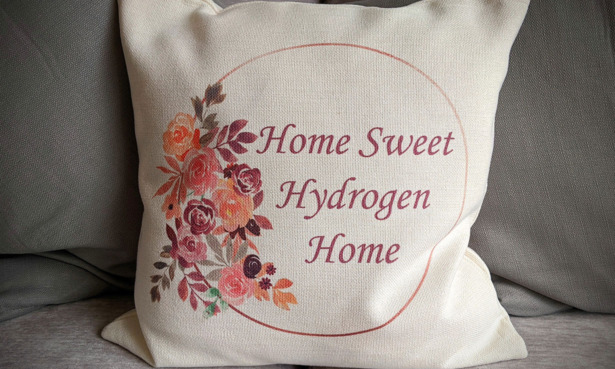 The government is set to decide in 2026 how big a role hydrogen will play in heating our homes. So there isn’t a set date for when hydrogen gas appliances will be available for homeowners to buy.

However, it’s likely that hydrogen-ready appliances will start appearing on the market from the mid-2020s onwards.

UK boiler manufacturers have also said they will support any future government legislation mandating that all boilers have to be ‘hydrogen-ready’ from 2025.

This will enable homeowners to install a boiler that is hydrogen-ready when their current boiler reaches the end of its natural life. It would run on natural gas, then in the future would be converted by a heating engineer to run on hydrogen when the gas supply gets switched over.

The Heating and Hot Water Industry Council has developed a technical definition for a hydrogen-ready boiler, ensuring that this conversion will take an hour or less to complete.

How much will a hydrogen boiler cost? 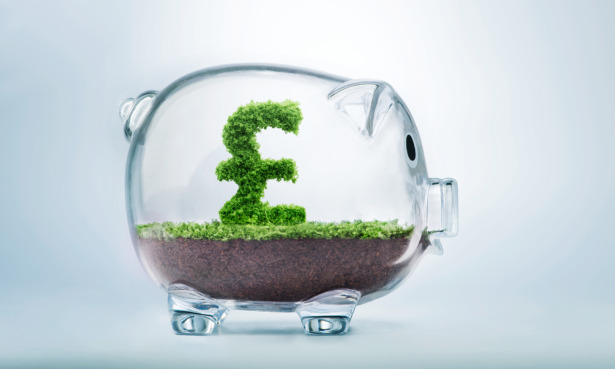 We can’t be sure exactly how much hydrogen boilers will cost – although costs are expected to be in line with the price of gas boilers today.

Several key boiler manufacturers, including Baxi, Ideal, Vaillant and Worcester Bosch, have committed to a joint initiative price promise that hydrogen-ready boilers will cost no more than natural gas equivalents.

The government mandating that all boilers sold from the mid-2020s onwards must be hydrogen-ready would probably keep costs down as well, as it would increase the demand for installing hydrogen-ready boilers, and in turn reduce manufacturing costs.

How much does a new boiler cost? – make sure your savings are on track for the future

Will hydrogen be coming to me? 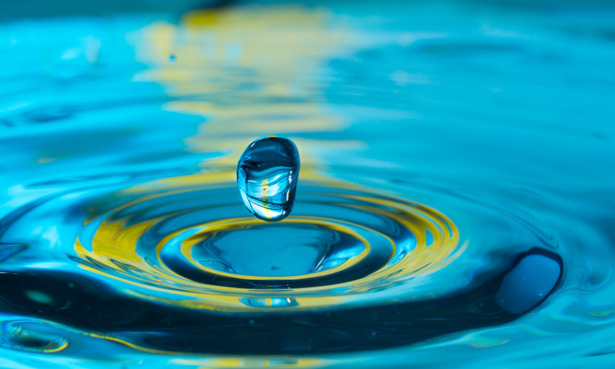 Research and trials are still underway to determine how feasible heating homes with hydrogen would be.

Two questions that need to be addressed are:

How much hydrogen can be produced

It’s predicted that a nine to 17-fold increase in hydrogen production will be needed by 2050 to meet demand, according to the Department for Business, Energy and Industrial Strategy (BEIS). A key factor in determining this figure is the number of homes that will be ‘earmarked’ to use hydrogen for heating.

Scaling up production over the next 30 years will be no small task.

How hydrogen will be made

Hydrogen is given different colour designations depending on how it’s made:

The UK government is backing blue and green hydrogen, but the former still relies on now-renewable fossil fuels.

Blue hydrogen can be low carbon, and is probably the best short to medium-term option until green hydrogen is cheaper to produce. But ultimately, making hydrogen won’t be zero carbon until it’s all green.

Find out more: The Which? Investigates podcast asks whether hydrogen could soon be heating your home

What you can do now to improve your heating

Despite low-carbon heating systems receiving a lot of attention, there are no plans to make anyone replace their heating system yet.

Gas boilers will be replaced by low-carbon alternatives as part of the natural replacement cycle, so wait until your boiler needs replacing.

No matter what heating system you eventually end up with, a well-insulated home will be cheaper and more efficient to heat. So something everyone can do now is improve their home’s energy efficiency.