About Which?
►
How we are run

Everything Which?* does has one overriding purpose: to tackle consumer harm by making life simpler, fairer and safer for everyone.

As an organisation we’re not-for-profit. Our campaigning work on behalf of all UK consumers is entirely funded by our commercial activities. We remain financially independent of government funding and charitable donations.

The Council of Trustees of the Consumers’ Association is the most senior governing body of our charity and the Which? Group as a whole. The Consumers' Association is a registered charity, regulated by the Charity Commission, and its trustees are charity trustees and company directors. Trustees are responsible for setting the strategy for the Group to enable the charity to deliver its charitable purpose and for monitoring and scrutinising delivery of this to ensure the continued success of the Which? Group.

Each company within the? Group is also governed by its own board:

The Which? Limited Board sets and oversees the commercial direction of Which?, including our magazines, paid-for digital products, Which? Legal, Which? Money Helpline, Which? Switch, Which? Trusted Traders, Which? Wills and Which? Money Compare, with the aim of delivering a long-term sustainable financial return for the charity. Which? Limited is a wholly owned subsidiary of the Consumers’ Association. The Board of Which? Limited is appointed by the Council of Trustees.

Our chief executive, Anabel Hoult, looks after the day-to-day running of Which?, with the support of her Leadership Team and from over 650 staff based in Cardiff and London.

The Council delegates responsibilities to the following committees which support its work in overseeing the entire organisation. The Council determines the remit and membership of each committee.

Which? at a glance 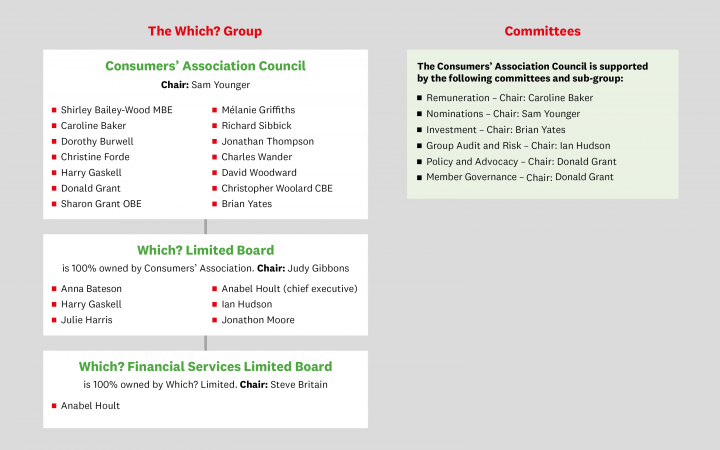 As part of our ongoing commitment to transparency around our governance, we have published our Conflicts of Interests policy. This explains the approach we take to identifying, preventing and recording any conflicts of interest between Council trustees (and directors of subsidiaries) and their outside interests. The policy is available below, along with more information on our governance.

In 2019 we concluded a Governance Review which set out to achieve a simplified, modernised and transparent governance structure, making Which? easy to understand, easy to lead and fit for the future.

If you would like to learn more, here's a summary of the recommendations and actions from the governance review:

For further information on the background to these changes, you'll find more detail in the Recommendations Report below.

*Which? is the trading name of the Which? Group, wholly owned by the Consumers' Association.