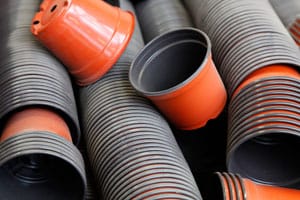 An estimated 500 million plastic plant pots are in circulation every year, and they just got a bit harder to recycle – Wyevale (now The Garden Centre Group) has dropped its pot recycling service at all 120 of its stores.

Lorrie Robertson, Marketing Director of The Garden Centre Group, told us: ‘We ran a flower pot recycling scheme in our garden centres for some time, which proved very popular with our customers. However, we ran into difficulties when we were unable to find a recycling company with the capability to sort the wide variety of plastics used in pot manufacturing. While we are currently unable to offer this service, we are committed to the recycling of waste products and will continue to search for a viable solution to this problem.’

This means that our options for recycling plastic pots are more limited. However Dobbies offers a recycling service at all 26 of its stores, found mostly in the North of England and Scotland. Richard Jardine, Dobbies sustainability manager confirms: ‘There is a crate in Dobbies garden centres throughout the UK in which customers are invited to dispose of their used plant pots. We ask that they are clean but they do not need to have been washed – as long as there is no soil left on them. The pots are baled along with Dobbies’ other plastic waste and sent for recycling or they are offered to local charities who are able to reuse them. Passing customers have also been known to lift a few for reuse in their own gardens.’

Notcutts also offers a plastic pot recycling scheme at all 19 of its garden centres – they’re recycled into new pots for Notcutts to sell its plants in. It also recycles bedding plant trays, made of polystyrene – a service it believes to be unique.

What can we do?

Most of us have a mini plastic pot mountain lurking somewhere in our garden and for most of us, our options for disposing of them responsibly are limited. So why are they so hard to recycle, and what can we do about it?

Plastic pots are made from different types of plastic to those used in food recycling. This means that many local authorities won’t accept them.

Some independent garden centres do offer a pot recycling service but if that isn’t the case near you, try to reuse them as much as possible or give them to schools and allotments.

Alternatively, try a biodegradable pot (made from coir, for example). Some nurseries such as the Hairy Pot Plant Company sell plants exclusively in these.

Hope on the horizon

There is some hope on the horizon, though – a company called Axion Recyling is carrying out a pilot ‘bring back’ scheme at garden centres in the North West of England this summer. It plans to collect pots and trays from about 200 nurseries and growers in north-west England then shred, wash and separate them before recycling them into plastic sheeting used in the horticulture industry, or into new pots. The scheme will be known as Pot-to-Pot and will run for three months this summer. ‘If it works, we’ll talk to DIY stores and garden centres and persuade them to offer their customers a bring-back scheme,’ says Keith Freegard, marketing director. ‘We want to challenge the belief that plant pots and trays can’t be recycled.’