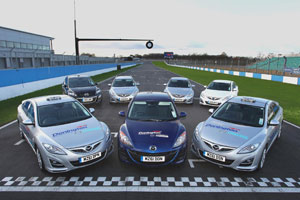 Mazda performed exceptionally well in both the new and used categories

The Which? Car survey is the biggest and best in the UK. And the 52,563 people who took part last year have helped us to rank the most reliable medium cars – both new and second-hand.

So what is a medium car? Well, it’s generally a three- or five-door hatchback (small saloons are rare in the UK), and is roughly the same size as a Ford Focus.

The Focus is significant as, despite being the best-selling car in this class, it doesn’t make either of our most reliable lists. Instead, it’s Japanese and German brands that fare particularly well.

Read on to find out the top five most reliable new and used medium cars, according to the 2011 Which? Car Survey.

You can help raise standards in the car industry – or simply get some car-related complaints off your chest – by telling us about your car in this year’s survey.

Fill in the 2012 Which? Car Survey and you’ll be in with a chance of winning £10,000. It takes no more than 15 minutes for each car you own, and is your opportunity to have your voice heard.

The Mazda 3 has never been a mainstream player in the UK, but it’s always been popular with Which? members – and deservedly so. A reliability score of 93% puts the 3 at the top of the class for cars less than three years old.

The first-generation A-class was notorious for build quality problems – and its propensity for rolling over when cornering at high speed. Fortunately, Mercedes ironed out the bugs for the current version, which remains impeccably reliable despite its advancing years.

Renault isn’t a name you usually see near the top of reliability charts. However, the medium-sized Megane bucks the trend, with just a handful of fuel system and electrical problems reported so far. We’d still be wary of buying a Megane outside of warranty, though.

Audi has launched countless new cars in recent years, yet still the A3 soldiers on – now nearly a decade old. The upmarket hatchback is clearly doing something right, though; both petrol and diesel models remain reassuringly free of faults.

Perhaps the car that defines the sector better than any other, the Golf is where many of us here at at Which? Car would put our own medium-car money. And the 427 Mk6 Golf owners who responded to our 2011 survey don’t generally disagree.

The baby Merc appears in both our new and used categories as many are over three years old. Indeed, its high prices mean the A-class makes perfect sense as a second-hand car. Breakdowns are almost unheard of, but diesel versions do suffer more faults.

The Auris, now available as a hybrid, is as dependable as you’d expect from Toyota – the car company that built its reputation on reliability. Sadly, this rather anonymous hatchback has never inspired the same loyalty among owners as its predecessor, the Corolla.

Old Mazda 3s don’t die, they just keep on going. And aside from excellent reliability, the previous 3 still has a lot going for it. There’s plenty of standard equipment and it’s enjoyable to drive, plus most examples are privately-owned – rather than ex-fleet cars – which means they’re usually well cared-for.

‘Corolla’ has been a byword for reliability since the original was launched in 1966. This was the last car to wear the nameplate in the UK, although Toyota may yet revive it. A reliability score of 80% is impressive given that even the youngest examples were five years old at the time of our survey.

Like the Megane, the Astra is a surprise entry in our reliability rankings. Faults occur more frequently in diesel-engined cars, but reliability is commendably above-average across the board. Shame owners still don’t rate the Astra highly – perhaps because many are simply supplied one as a company car.