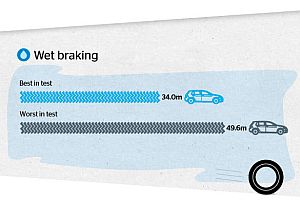 Testing by Which? has revealed shocking differences in braking distances between the best and worst tyres.

Not only that, but our assessment of tyre wear shows that buying a cheap tyre instead of a Best Buy could work out more expensive in the long run.

Trial Which? for £1 to see all the results, including six new Best Buys.

In the latest round of tyre testing by Which?, 17 different tyre brands were put through their paces in the popular 185/60 R15H tyre size. This is a typical tyre size for small cars such as the Mini, Nissan Micra, Peugeot 208 and Volkswagen Polo.

One of our most important tests assesses wet braking ability, with a car braking from 50mph down to 12mph in wet conditions.

In the most extreme case, the best-performing tyre for braking distance took only 34.0 metres to brake.

In identical, controlled conditions, exactly the same test car wearing the worst-performing tyre took 49.6 metres to brake from and to the same speeds.

That’s a disparity of 15.6m, or approximately 3.7 cars lengths – in other words, the sort of distance that could represent the difference between life and death in an emergency situation.

Cheap tyres could cost you dear

Which? also tests tyres for wear. We measure tyre wear over 3,100 miles and predict tyre life based on what we see.

While it may be tempting to choose a relatively cheap set of tyres costing £200 for four, in fact you’d be better off spending over £300 for a set of better quality tyres.

The reason is the rate of wear. According to Which? test measurements, the cheaper tyres would only last two years at 12,000 miles a year, whereas a set of more expensive tyres would last 60,000 miles – enough for five years’ service.

So over five years and 60,000 miles, all you pay for the initially more expensive tyres is the original purchase cost (in this case £320), whereas the cost of replacing the cheaper tyres would be £500 – a massive £180 difference.