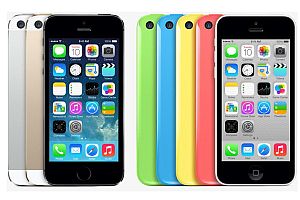 Looking for a new mobile phone? Our experts have spent three weeks pulling apart the new iPhones to see just how good they are and whether they can live up to Apple’s bold claims.

Apple launched the two new phones last month to the traditional fanfare, with crowds queuing outside Apple stores across the world. Within three days Apple had sold nine million of the new devices – a new record.

See how the new iPhone 5s and 5c measured up against over 70 other mobile phones we’ve tested by heading to our mobile phone reviews.

The iPhone 5s is the more advanced of the two new phones. It may look almost identical to 2012’s iPhone 5 (although it is available in new colour options), but the 5s has an improved camera, a faster processor and a longer-lasting battery. It also has a clever new fingerprint scanner that enables you to easily unlock your phone, and approve purchases from iTunes and the App Store, simply by pressing your finger against the Home button.

The iPhone 5c is essentially the old iPhone 5 with a fresh new look. Apple has replaced the metal finish with a cheaper, plastic casing that’s available in five bright colours (white, blue, yellow, green and pink).

Both new phones run on the latest version of Apple’s operating system, iOS7.

The iPhone 5s is one of the most expensive phones you can buy. Even the cheapest phone contract costs £42 per month (unless you’re prepared to pay upfront for the phone) – in contrast you can buy the Samsung Galaxy S4 or HTC One for £10 a month less, saving £240 over the course of a two-year contract.

The Phone 5c is Apple’s more affordable iPhone. The 16GB version is £80 cheaper than the equivalent 5s (£469 vs £549 when bought Sim-free from Apple) but it’s far from a budget model and still costs more than most rival phones.

Which? members can log in to find out how all these mobile phones have fared in our tests. But if you’re not a member yet, you can still discover which phones have done well by signing up for a £1 trial and getting instant access to all of our product reviews.

How we test mobile phones

We put every phone through the same tests – a mixture of hands-on assessments from independent experts and technical lab testing – so we can give you a verdict you can trust. We measure battery life on calls and when surfing the internet to make sure the phone matches the battery life claims made by manufacturers. We also check the screen quality and processor power and assess the camera and supplied headphones.

Ergonomic experts rate how easy the phone is to use by performing a series of everyday tasks, such as sending text messages or browsing web pages, and we assess the sound quality to make sure you’ll be able to hear your friends when you’re talking to them.