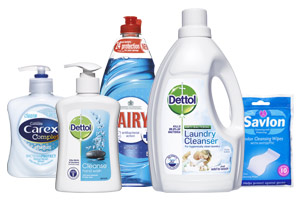 Do you need antibacterial products?

From antibacterial washing-up liquid to germ-busting handwash, Which? research has found that you may be buying antibacterial products you don’t need.

We handed five antibacterial products to two expert scientists and asked them to assess whether the claims were true, and whether you need them at all.

For all the antibacterial products, the experts concluded that in many situations they simply weren’t necessary. This was because either there was a simple way of achieving the same effect, such as thorough hand washing, or you were unlikely to become ill that way in the first place. We found that the claims were generally true – though some were vague.

Which? members can read the full article ‘Antibacterial products you don’t need’ in the June 2014 issue of Which? magazine. If you’re not a member you can sign up for a trial for a £1 to get instant access to all our investigations and reviews.

If you’re not bothered about antibacterial claims visit our reviews of washing up liquids and laundry detergents to find out which we rated as Best Buys.

What you think about germs

When we surveyed Which? members to find your views on these types of antibacterial products we also uncovered cynicism, with most of you expressing some doubts about the benefits provided.

Yet half of you said that you would choose the product with the antibacterial claim, if price wasn’t a factor. This suggests that the germ-free claims probably do influence how we shop.

Which? Editor Richard Headland said: ‘There are a few instances where antibacterial products may provide additional protection, but consumers should think about whether they really need products with antibacterial claims or whether you can achieve similar results another way such as simply using soap and water.’

What the companies said

Savlon said: These wipes are a cosmetic product and the levels of antiseptic are consistent with a cosmetic rather than a medicine. The claims comply with the relevant legal requirements and are based on the known activities of the two antiseptic ingredients.

Fairy said: The microbiological efficacy of Fairy Eucalyptus Antibacterial Action washing-up liquid has been fully tested. We do believe it provides an important extra measure of protection. The claims focus on sponges, as they are a critical implement that can harbour unwanted germs. Testing against water is relevant as a negative control.

Carex said: There is a role in public health for hand washing with ordinary soap – but consumers do not wash their hands as frequently or as well as they should. Carex is more effective and faster acting than ordinary soaps in European Standard antibacterial tests. The products moisturise, nourish and have odour protection as well, which is the added value compared with a standard soap.